Anson Chan, a longtime Hong Kong dignitary and fierce advocate of human rights and the rule of law, was awarded the O’Connor Justice Prize in a recent ceremony at the Arizona Biltmore. And her powerful acceptance speech, detailing China’s increasing political censorship of Hong Kong, drew international attention.

The annual award, administered by the Sandra Day O’Connor College of Law at Arizona State University, was created to honor the legacy of the school’s namesake, retired U.S. Supreme Court Justice Sandra Day O’Connor. It recognizes those who have made extraordinary efforts to advance the rule of law, justice and human rights. 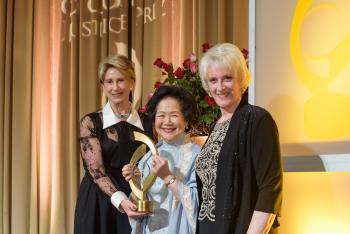 “I am deeply honored to be awarded the 2018 O’Connor Justice Prize and to join the company of three most distinguished predecessors,” said Chan, the fourth recipient of the award. “The values embodied within the spirit of this prize, namely advancement of the rule of law, justice and human rights, are particularly close to my heart, and it is a privilege to be associated with an award that celebrates Justice O’Connor’s extraordinary legacy.”

Barbara Barrett, former U.S. ambassador to Finland, is co-chair of the O’Connor Justice Prize advisory board and introduced Chan.

“Aristotle said, ‘Moral excellence comes about as a result of habit. We become just by doing just acts, temperate by doing temperate acts, and brave by doing brave acts,’” Barrett said. “Tonight, we honor a just, temperate and brave advocate for democracy, human rights and rule of law, Anson Chan.”

Chan expressed concerns about Hong Kong’s independence, describing increasing oversight by the Chinese government. She pointed to the changes that have taken place in the two decades since the transfer of sovereignty from British rule in 1997, a transition that Chan helped oversee in her role as chief secretary for administration.

Although she acknowledged that the British Hong Kong government was not without its faults, she praised it as a “corruption-free and caring administration, operating on a firm foundation of the rule of law.” She said the Hong Kong Special Administrative Region, known as the SAR, is now governed by the 1984 agreement that paved the way for the transfer of sovereignty. That internationally binding treaty was based on the “One Country, Two Systems” principle created in the early 1980s as a way to reunite communist China with historically capitalist territories such as Hong Kong, Taiwan and Macau.

The treaty called for Hong Kong to maintain a high degree of autonomy, along with its capitalist economy.

“As time has gone by, however, it has become clear that Beijing is now bent on molding Hong Kong’s governance to become more closely aligned with that of the mainland, while still maintaining that ‘One Country, Two Systems’ remains alive and well,” Chan said. “The people of Hong Kong are effectively being told that, in the final analysis, the extent of autonomy granted to them under the Basic Law will be for the central government to determine.” 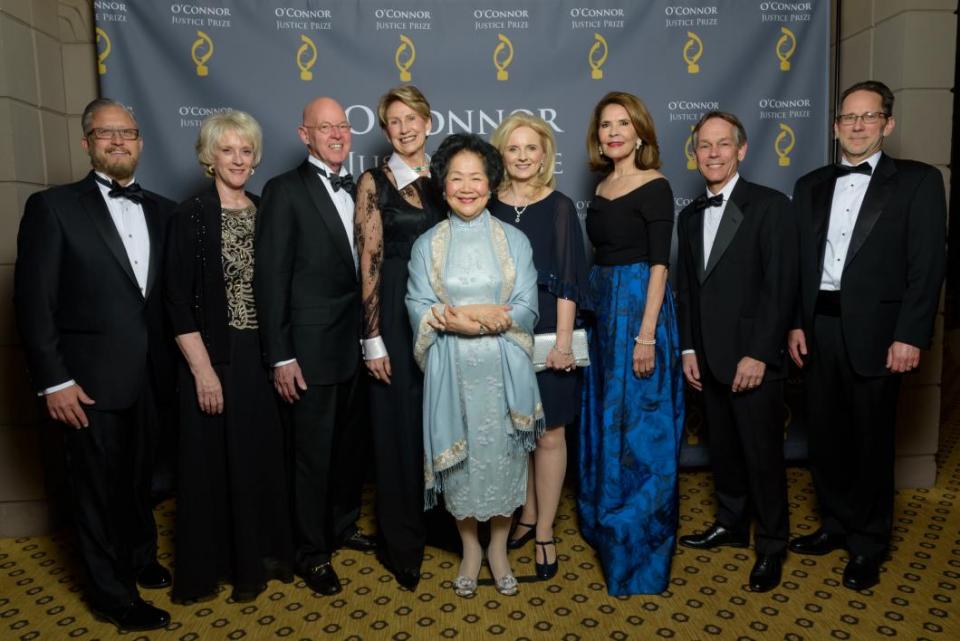 Chan’s words echoed throughout the globe, drawing a response the next day from the Hong Kong government. In a release, the government said, “Statements made arbitrarily to undermine the rule of law and our well-recognized reputation in this regard is not conducive to Hong Kong’s progress.”

The government statement went on to tout the “full and successful implementation” of “One Country, Two Systems,” saying the political independence granted to Hong Kong “has been widely recognized by the international community.”

But Barrett painted a different picture at Chan's ceremony, and highlighted the critical role Chan has played as a guardian of the “One Country, Two Systems” principle.

“Observers referred to Chief Secretary Anson Chan as the canary in the coal mine, suggesting that if Beijing poisoned Hong Kong with repression, the resolute Anson Chan would offer early warning,” she said. “And with her characteristic tenacity and courage, would defend the rights, liberty and lives of her 7 million countrymen.”

Barrett then explained how Chan, like O’Connor, has taken it upon herself to lead the charge for freedom and human rights after leaving political office.

“Since Anson Chan stepped down, many perceive that China has broken its commitment, especially with regard to booksellers, freedom of the press and selection of the chief executive,” Barrett said. “However, Anson Chan is still a potent force for freedom. She recently launched Hong Kong 2020, a democracy and governance think tank. And, like Justice O’Connor’s institute, Anson Chan’s Project Citizens Foundation promotes civic awareness and educates the public, particularly the younger generation, on the need to protect Hong Kong’s core values, rule of law, and basic rights under ‘One Country, Two Systems.’”

O’Connor’s legacy and the rule of law

Speakers throughout the night drew parallels between Chan and O’Connor.

Ruth McGregor, retired chief justice of the Arizona Supreme Court, is co-chair of the O’Connor Justice Prize advisory board. Addressing the audience, she discussed the importance of an impartial and independent judiciary in guaranteeing human rights, and how O’Connor has worked tirelessly to ensure that justice systems across the globe are protected against unrelenting political attacks.

“In many countries, those in power and those seeking power understand the limitations imposed on personal power by the rule of law, and thus seek to limit its effectiveness,” said McGregor, a former judicial clerk of O’Connor’s. “But the rule of law is not defenseless. Standing in support of its principles are those who understand, not only on an intellectual level, but also on a deep and visceral level, just how much we stand to lose if the protection afforded by the rule of law is lost.”

McGregor said Chan, like O’Connor, is “one of those who has stood steadfast in protecting the basic freedoms ensured by a fair and independent system of justice.”

“What we celebrate here tonight is not just Justice O’Connor’s name and legacy as the first female justice on the United States Supreme Court, but really her continued focus on making the world a better place,” Sylvester told the audience, “continually focusing on not just our institutions here in the United States, but everywhere in which injustice arises.”

Chan underscored her concerns about China’s increasing oversight and how much is at stake for Hong Kong if the rule of law is threatened.

“The rule of law is sacrosanct because, if it is lost, all the other rights and freedoms that it underpins are threatened: freedoms of speech and of the press and publication, freedom of the person and protection from arbitrary arrest, detention or imprisonment, freedom of association and assembly, freedom of conscience and religious belief, of academic teaching and research, the right to legal representation,” Chan said. “These rights and freedoms and more, none of which are practiced in mainland China, are spelled out clearly in the Basic Law.”

As serious as those threats may be, Chan expressed hope for the future, and vowed that she and many others in Hong Kong will continue to fight for democratic principles.

“I am an eternal optimist, and I’m always determined not to end on a pessimistic note,” she said. “I acknowledge that Hong Kong faces many challenges if we are to sustain the values and lifestyle that have made it one of the world’s most spectacular international cities. And tonight, I would like to reassure you all who have supported my selection for this most prestigious award, that the many of us in Hong Kong who believe passionately in the importance of democratic governance, and in the maintenance of the rule of law, will not give up the struggle to see this achieved.”

Chan concluded by likening Hong Kong’s perseverance to O’Connor’s and accepting the award on behalf of all of Hong Kong.

“I am very conscious that this prize is not just for me, but for the people of Hong Kong, particularly for our young, their generation, and all that we stand for. I thank you for welcoming me to your shores. For the memories of this evening, and for the honor that you have bestowed upon me. In my remaining years, I shall strive to be worthy of that prize. Thank you all very much.”

Chan is the fourth recipient of the O’Connor Justice Prize, which was established in 2014. Previous winners were:

Visit the website for more information on the O'Connor Justice Prize and its winners.

Devils Crack Oracle/ITA Rankings at No. 20

Devils Crack Oracle/ITA Rankings at No. 20