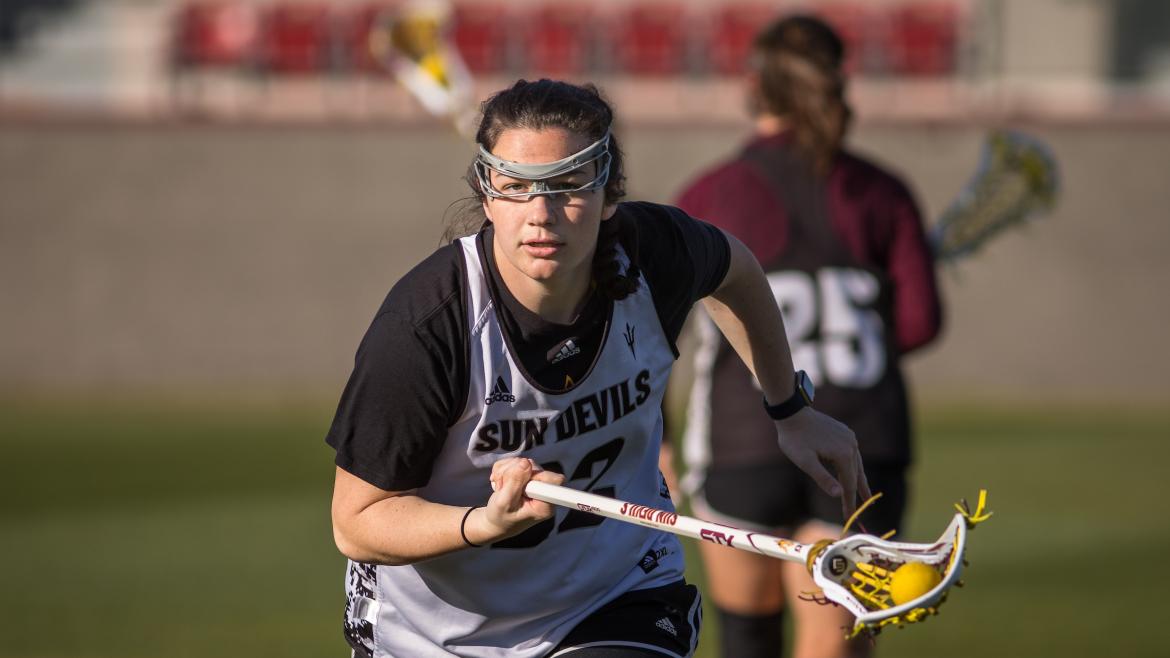 Courtney Martinez Connor has spent two full years building the Sun Devil women’s lacrosse team from scratch and she is ready for the start of the new team’s inaugural season on Feb. 9.

“It’s exciting for the university, the athletic department and the state to be the first Division 1 lacrosse program in the state of Arizona,” said Martinez Connor, who arrived as head coach at Arizona State University in early 2016 to create the program from the ground up.

“It’s finding space in the locker room. It’s ‘What are you going to wear?’ You need equipment, a staff, academic coaches, a trainer — everything the other teams already have in place,” she said.

“And then you have to find the players and convince them to come here and then train them to all be on the same page.

“What’s cool is you get to do it your way. But that short timeline is the toughest part.”

Lacrosse was announced as a new varsity women’s sport in 2015 as part of a $32 million donation to Sun Devils Athletics that elevated the men’s ice hockey team from a club sport to NCAA Division 1 level, as well as adding women’s triathlon.

The eastern part of the United States is a hotbed for lacrosse, while no western team has ever won the NCAA Division 1 women’s lacrosse title — or even made it to the finals. Three universities have dominated the last 10 championships: Maryland, North Carolina and Northwestern.

But the sport is making inroads in Arizona. The Arizona Interscholastic Association, the governing body for high school sports, does not sanction lacrosse, but a few dozen high schools in the Valley have club teams that play in independent leagues, drawing hundreds of teenagers.

When she was broadcasting, Martinez Connor would get offers to return to coaching, but no school was the right fit. When ASU announced it was adding the sport, she decided to visit and talk with Ray Anderson, vice president of university athletics.

“Ray told me, ‘There will never be another opportunity like this.’ And I knew it was true,” she said. “Never in a million years did I think Arizona State would be the place. It’s a desert. But I loved the people I met and I knew this is a place where I could build a national championship-caliber team.”

Once she committed, Martinez Connor said it wasn’t hard to draw talented players to sunny Tempe.

“The rest of the country is playing in snow right now,” she said, adding that Barrett, The Honors College was a major draw for several of the players. Head coach Courtney Martinez Connor gives instructions during practice at the Soccer Stadium. She won several national championships when she played for the University of Maryland, a lacrosse powerhouse. 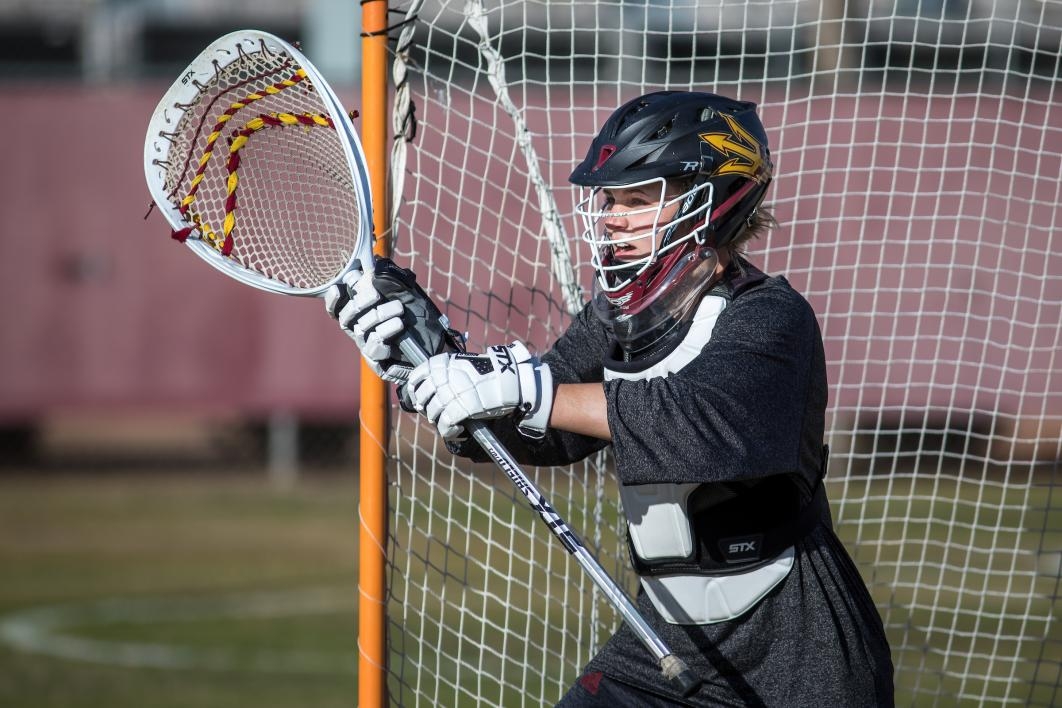 Goalie Berkeley Bonneau takes some shots during practice at the Soccer Stadium. She is a sophomore majoring in nursing. The Sun Devils women's lacrosse team opens its inaugural season against Kennesaw State in Georgia on Friday, Feb. 9. 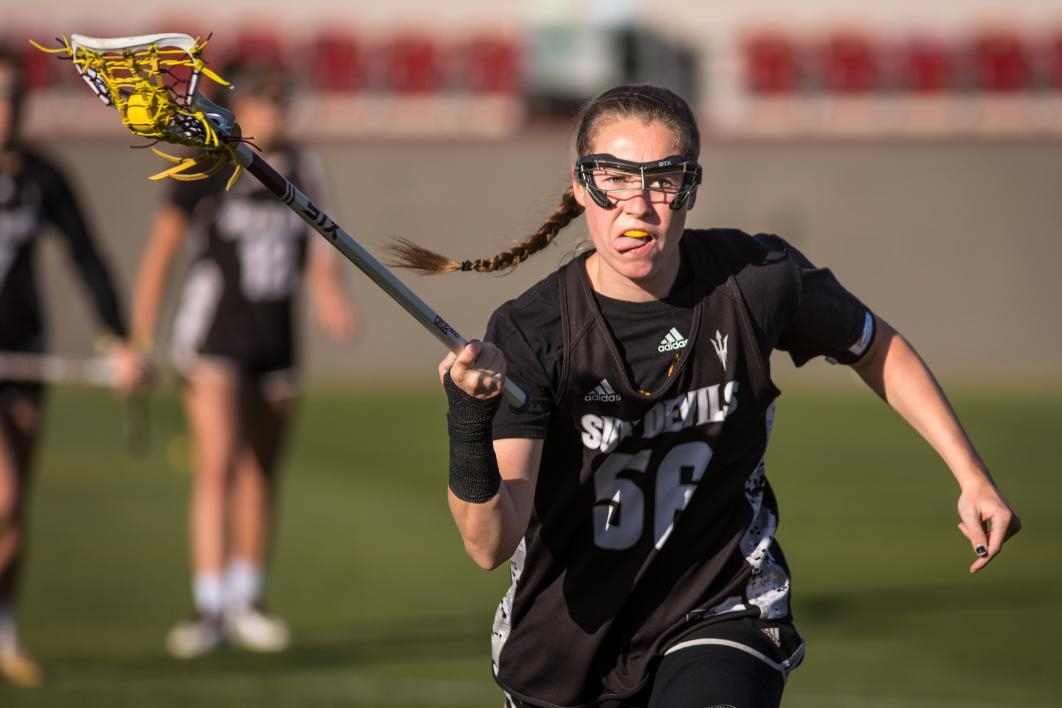 Rachel Gregory, who plays defense, runs through drills during practice at the Soccer Stadium. A transfer from Hofstra University, she is a junior majoring in sustainability and is one of the team captains. 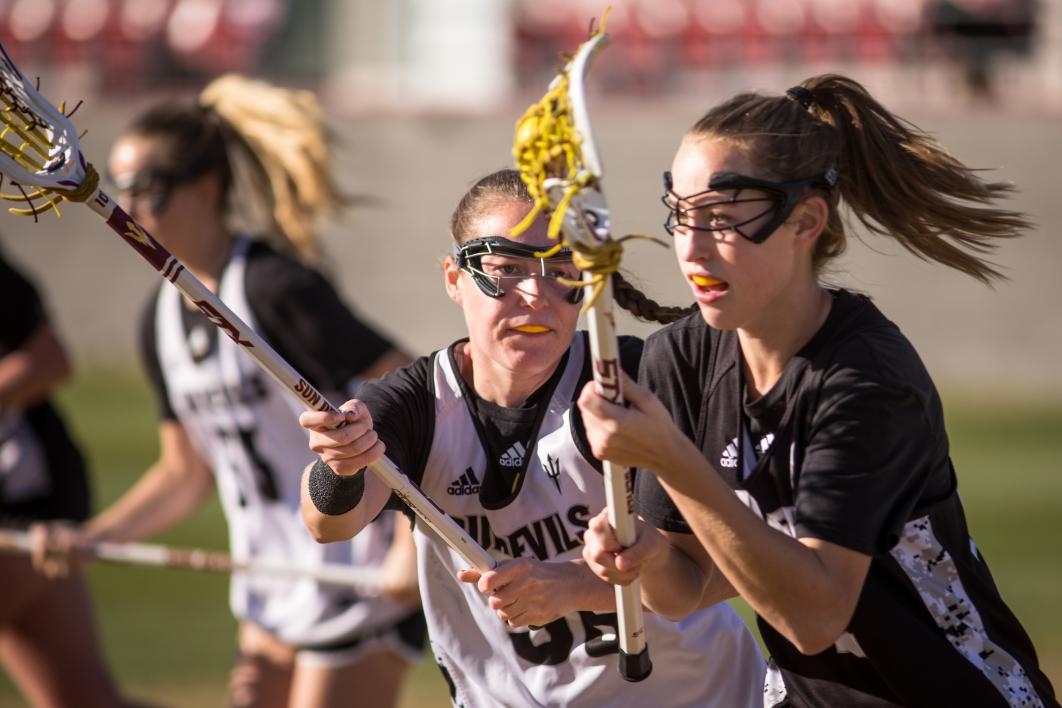 Rachel Gregory works with the other members of the Sun Devils women's lacrosse team during practice at the Soccer Stadium. The team opens its inaugural season by spending three weeks on the road before playing its first home game March 3.

Clayton said the women have been working on bonding.

“We want to make sure we’re best friends on the field and off because it’s definitely correlated. You’ll make passes you wouldn’t make with a stranger,” she said.

Clayton said she’s run across some unfamiliarity with lacrosse among her fellow ASU students.

“They ask, ‘Is it a club team?’ People are like, ‘Oh, it’s a mix of rugby and field hockey and soccer, right?’ I tell them to just come out to a game.”

The Sun Devils could be part of another first: With ASU adopting women’s lacrosse for 2018, the Pac-12 conference reached the minimum number of teams required to create a championship in the sport, which will be held in April in Colorado. (The five other Pac-12 universities with women’s lacrosse teams are Stanford, USC, Cal, Colorado and Oregon.)

Martinez Connor knows the inaugural season will be a challenge.

But the chance to create something new is exciting for the entire team.

“We’re a part of building a tradition,” Martinez Connor said. “It says a lot when you can put your name to something and say ‘I helped to do that.’

“Not everybody can say that.”

The Sun Devils will spend the first three weeks of the season on the road, traveling to Georgia, Florida, San Diego and New York. Their first home game is 1 p.m. March 3 against Presbyterian. Admission is free for all home games at Sun Devil Soccer/Lacrosse Stadium. Find the schedule here.

Top photo: Junior Kerri Clayton runs a drill during practice. She is one of the team's captains. Photo by Charlie Leight/ASU Now

Why don’t things work? That question has driven Barry Bozeman during a lifetime of inquiry into such diverse topics as why red tape mucks up government, how gender affects scientific collaboration and the ways that society can achieve public values.The Arizona State University professor has written papers on faculty job satisfaction, ticket scalping, the 2004 flu epidemic and the 2010 Gulf of M... 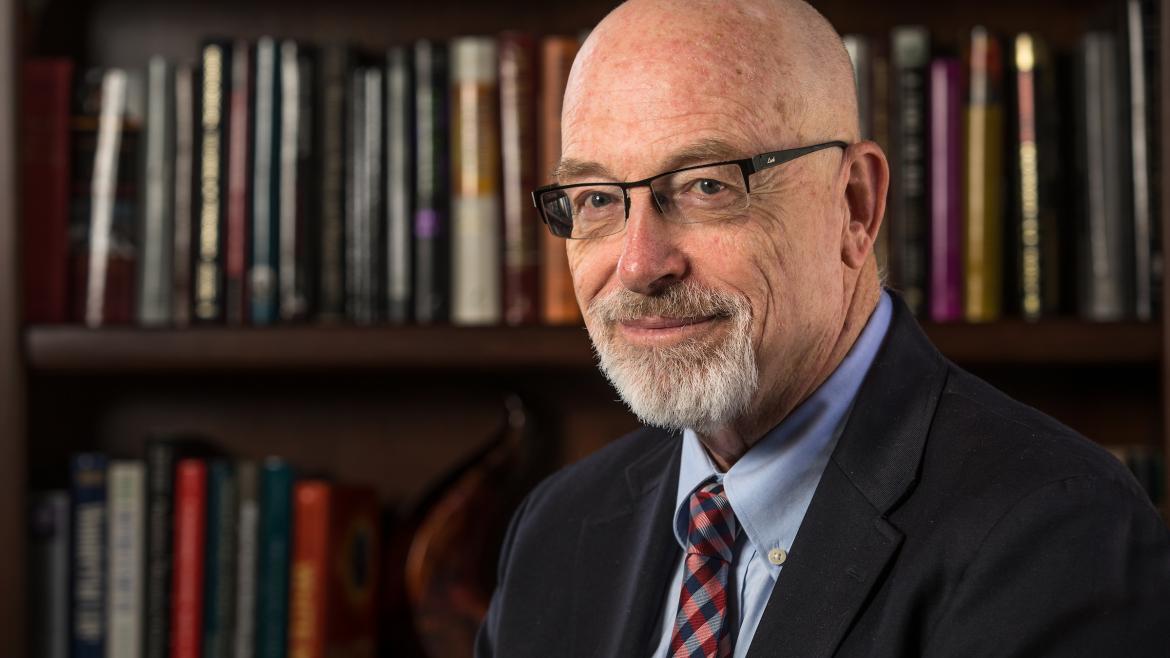 Why don’t things work? That question has driven Barry Bozeman during a lifetime of inquiry into such diverse topics as why red tape mucks up government, how gender affects scientific collaboration and the ways that society can achieve public values.

Bozeman is an expert in organization theory and public policy — how people work together and solve problems.

And he’s been so outstanding that he’s been named one of four ASU Regents' Professors for the 2017-18 school year — an elite distinction achieved by only 3 percent of his fellow faculty members. It’s the highest faculty honor and is conferred on full professors who have made remarkable achievementsThe other three ASU Regents Professors are Hava Tirosh-Samuelson, Daniel Bodansky and Thomas Dishion. This is the third Regents professorship for Bozeman, who also received the honor while on the faculty at the University of Georgia and Georgia Tech. that have earned national and international distinction.

Bozeman is the Arizona Centennial Professor of Technology Policy and Public Management in the School of Public Affairs, in the College of Public Service and Community Solutions on the Downtown Phoenix campus. He is also director of the Center of Organizational Research and Design. He’s written or edited 15 books and more than 120 research papers.

His work across many topics is by design.

“One of the things that keeps me going all the time is to try something new, so I don’t feel any compunction about moving into a new area and doing something I’ve never done before,” he said.

Bozeman earned master’s and doctoral degrees in political science. In between those degrees, he worked as a crime reporter at a newspaper, which he describes as “excellent preparation for being a scholar because you had to do all your work in the field and compose stuff on the fly.”

He was especially interested in science policy and worked for a year at the National Science Foundation, where he grasped the inner workings of how funding is determined and distributed. Since then, he’s done a lot of work on how to design and evaluate scientific institutions and technology centers.

That led to his research over the last decade into scientific collaboration, a trend that’s grown enormously.

“We found that about 94 percent of all research studies are collaborative and involved a team,” he said. “That was not true in the 1960s and ‘70s.”

That might be good for science, but it’s not always a straightforward benefit to the scientists.

“One of the primary things that has changed is how you receive credit. For example, if you’re a university scientist and you’re going up for tenure and promotion and you work in very large teams, maybe 20 or more authors on a paper, how much credit should you get for that?”

The potential for conflict and disagreement can rise with the number of people in a collaboration, he said — particularly when the group spans cultures.

“They might have the same scientific culture but that doesn’t mean they have the same attitudes about knowledge, about intellectual property or about gender,” he said.

“In some countries, if you go to a scientific conference and you’re a woman, you’re put into a separate room where they broadcast a video so they don’t integrate the men and women. You can see why that would be an impediment to science.”

Bozeman said he’s always been drawn to “bureaucratic pathologies,” particularly involving red tape, and now has a grant from the National Science Foundation to look at rules and regulations.

Another area he explored in the past few years is sports economics and policy. His study of ticket-scalping markets at Arizona Diamondbacks games, which was published recently in Social Science Quarterly, found social value in the practice.

“They police themselves,” he said. “It would be difficult for someone to cheat because the other groups would be on them in a minute because they don’t want to lose their ability to cultivate customers. They also police counterfeit tickets.”

While he’s a prolific researcher, Bozeman also loves the classroom and teaches both graduate and undergraduate students.

“’I’ve had a fun and interesting career with a lot of opportunities and I’ve gotten recognition that I’m pleased about, but I never deceive myself that anything I’m doing is more important than teaching,” he said.

Heather Rimes can attest to that. Bozeman was the doctoral adviser for Rimes, who is now an assistant professor of public administration and public policy at Western Carolina University.

“Personally, during my time as Barry’s student, I built confidence as he took my ideas seriously while simultaneously pushing me to think about concepts from different perspectives and to further develop as a researcher.”

Bozeman enjoys the undergraduates in his program, most of whom are first-generation college-goers, like he was.

“They’re not in any sense entitled. They’re people who are trying to improve themselves and I identify with them,” he said.

Among the thousands of young people he helped along the way was ASU President Michael Crow. Bozeman served as Crow’s doctoral adviser at Syracuse University and the two have remained friends and colleagues, collaborating on several books.

“I think a lot of what he’s done here is remarkable,” Bozeman said.

“The part I’m really attracted to is the idea of inclusiveness — the idea of economic and social opportunity for students. Not only is his heart truly there, but so is mine.”