An Arizona State University team won $100,000 at the ASU Innovation Open on Friday to fund their business, which makes a device that relieves anxiety.

Hoolest Performance Technologies, made up of three ASU engineering students, won the grand prize at the entrepreneurial competition, beating out four other student-led ventures. The $100,000 investment will go toward creating more of the earbud devices, which block stress by stimulating the vagus nerve.

The idea was launched by Nicholas Hool, a biomedical engineering graduate student in the Ira A. Fulton Schools of Engineering, who suffered from performance anxiety while he was a nationally competitive golfer in high school.

“Everyone is familiar with being nervous, whether it’s playing golf against Tiger Woods or giving a public presentation,” Hool told the judges during the team’s pitch. “Uncontrolled nerves can significantly inhibit your performance.”

Hoolest Performance Technologies earbuds sit inside the ear, like regular earbuds, and emit an electrical stimulation that connects to the vagus nerve, which activates the body’s own relaxation response, lowering the heart rate. Hool said the device, which will sell for about $200 when it eventually gets to market, works in minutes and the effect lasts for almost an hour without the side effects of anti-anxiety medications.

The company has already signed up a few professional golfers to test the earbuds, which will be targeted at elite athletes first, and then the general public.

The other members of Hoolest Performance Technologies are Sami Mian, a computer engineering graduate student, and John Patterson, an undergraduate in electrical engineering.

Hool said the $100,000 investment will go toward making about 300 more devices, which are now in clinical testing.

This was the second ASU Innovation Open, and the contest began accepting applications, in the form of five-minute videos, from hundreds of student-led teams last year. The contest was sponsored by Avnet, which donated the $100,000 top prize, and the Ira A. Fulton Schools of Engineering at ASU. Additional sponsors were Zero Mass Water, Hool Coury Law, ON Semiconductor and SRP.

The other finalists were:

• Bloomer HealthTech, a company of three women from the Massachusetts Institute of Technology that created a bra with sensors to record and evaluate heart data. They won $25,000.

• Hygiea, a waste-management platform that uses a sensor to make cleaning more efficient. That company was founded by Saimon Shetty, an ASU alumnus.

• W8X, an interactive strength-training system created by a team of students from MIT. 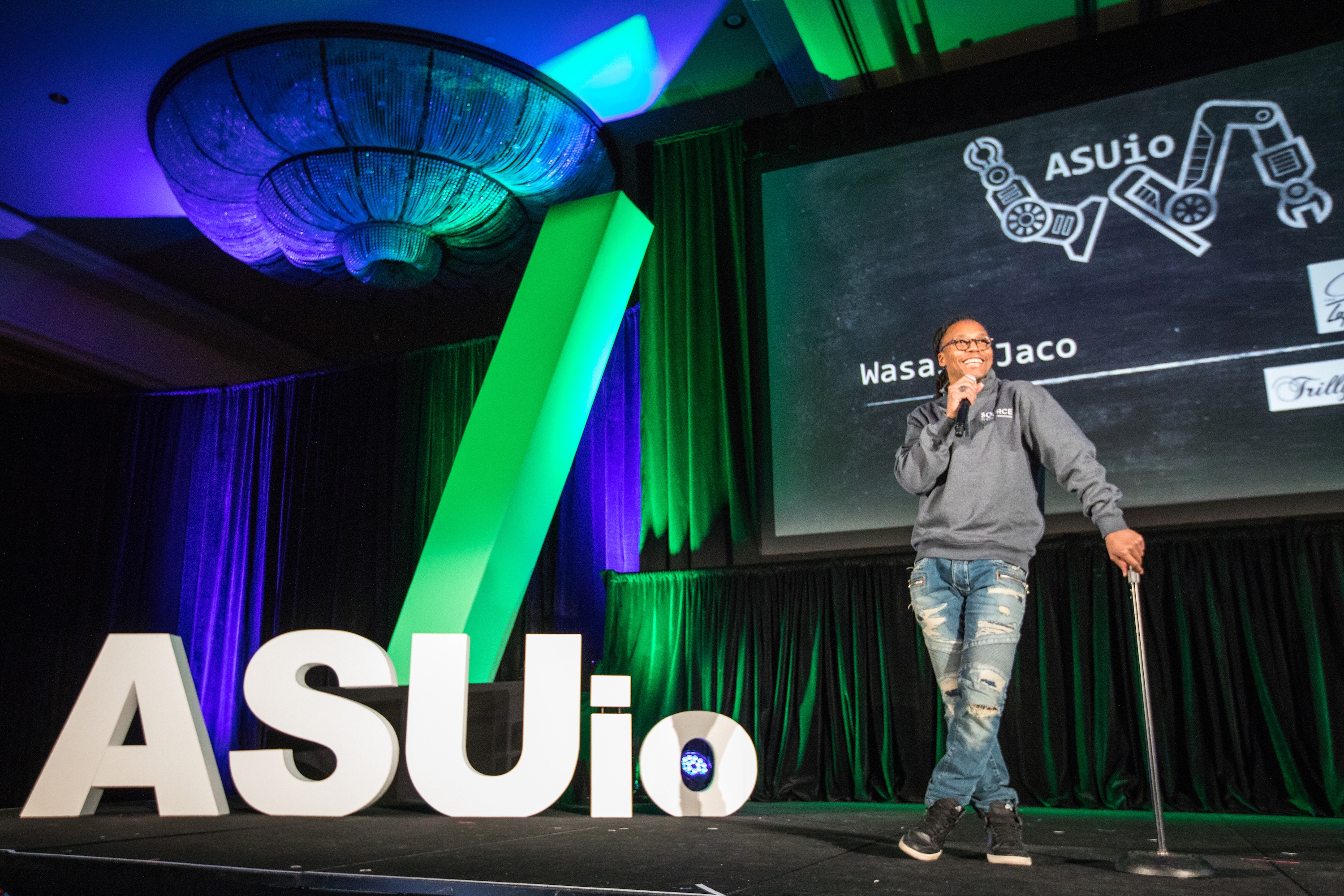 Keynote speaker Wasalu Jaco (aka Lupe Fiasco) entertains the audience with his personal history at the ASU Innovation Open finals on Friday, Feb. 2, at the Fairmont Scottsdale Princess Resort. 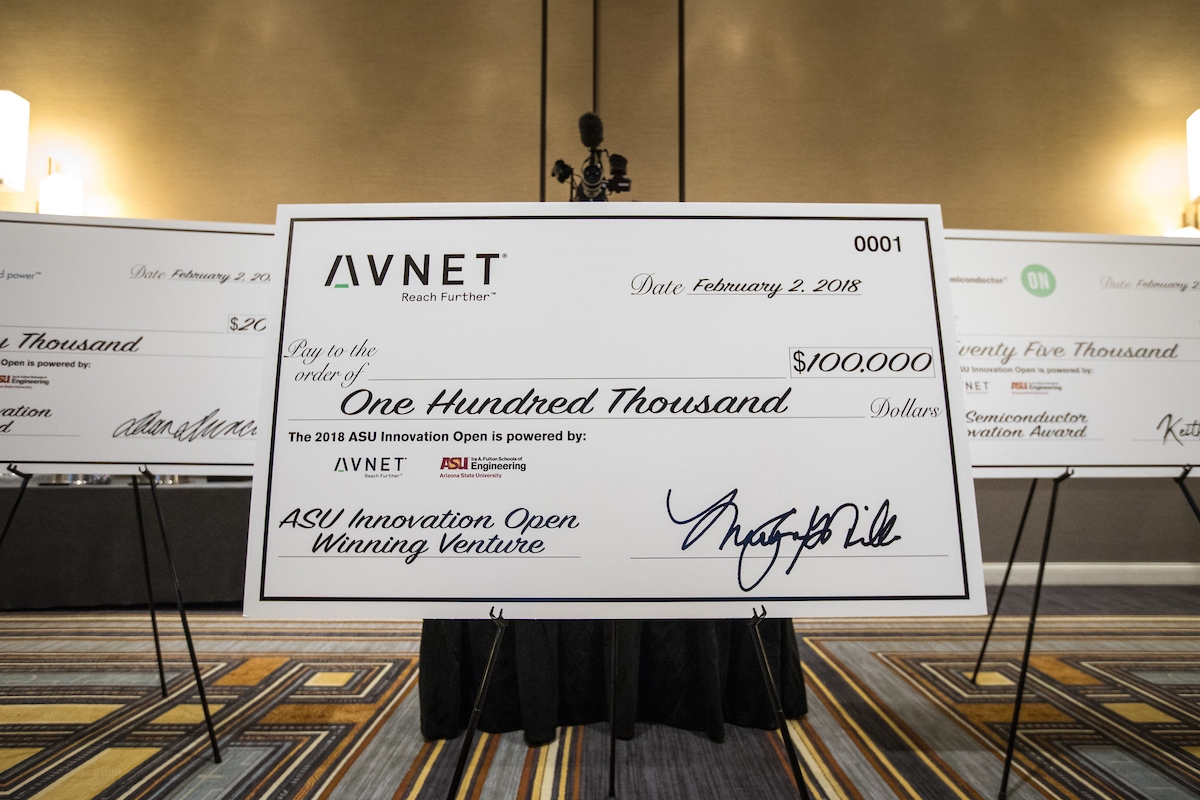 Blank checks wait to be awarded at the ASU Innovation Open finals on Friday, Feb. 2, at the Fairmont Scottsdale Princess Resort. The competition for the $100,000 grand prize featured five student-led ventures, with three groups from ASU and two from MIT. 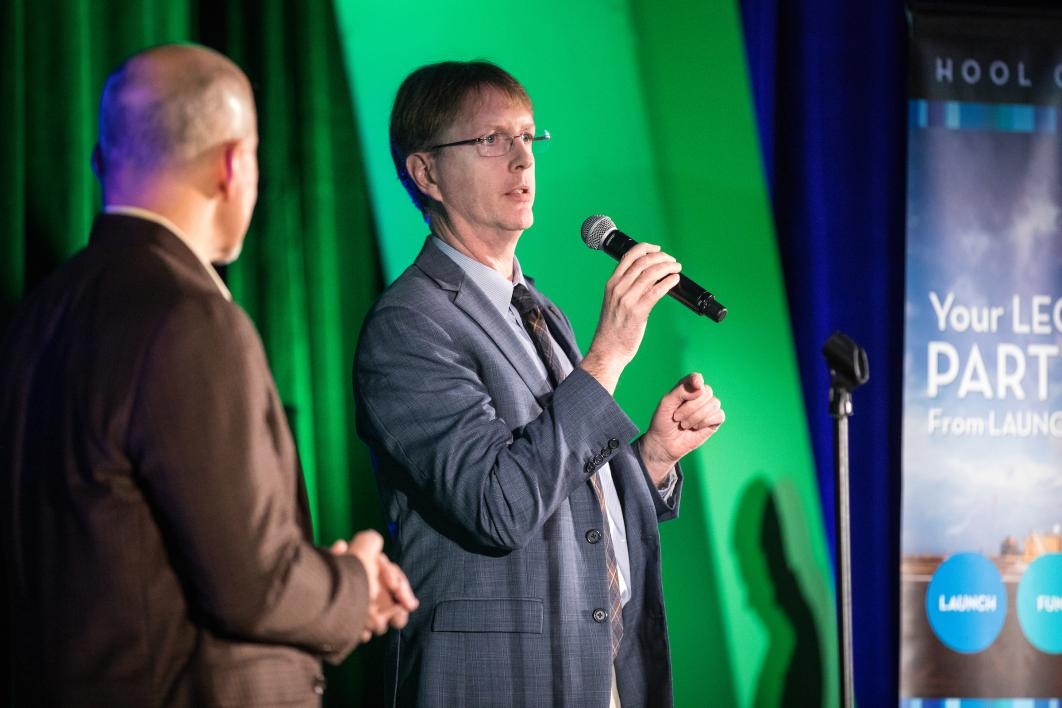 Kyle Squires, dean of the Ira A. Fulton Schools of Engineering, greets the audience at the ASU Innovation Open finals on Friday, Feb. 2, at the Fairmont Scottsdale Princess Resort. 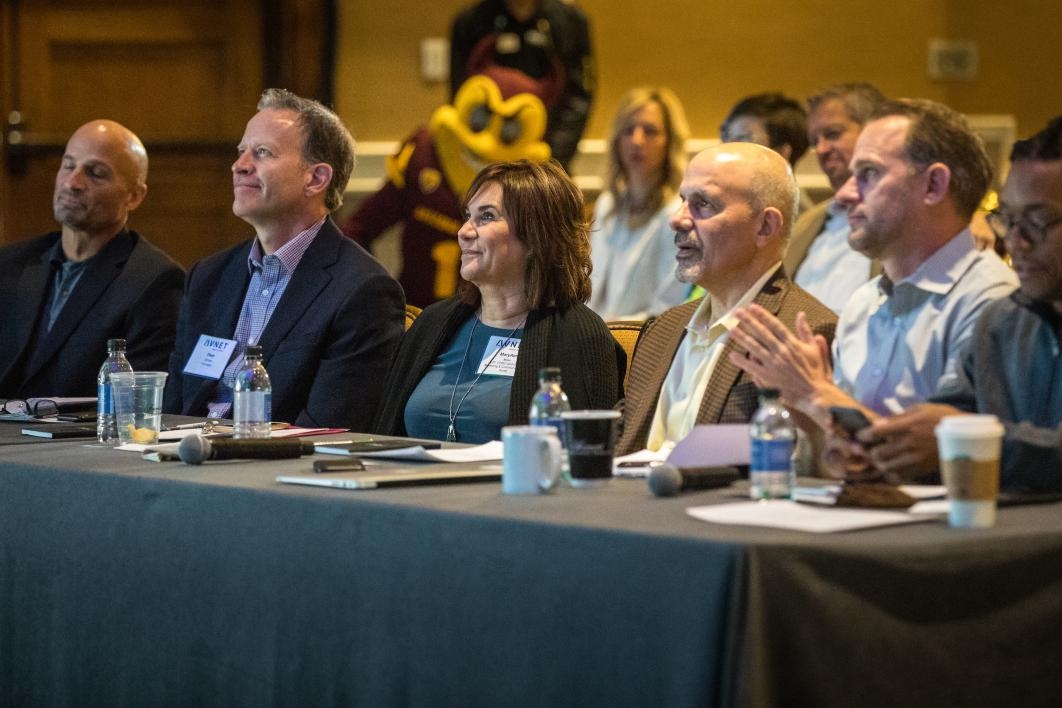 The judges listen to the contestants at the ASU Innovation Open finals on Friday, Feb. 2, at the Fairmont Scottsdale Princess Resort. 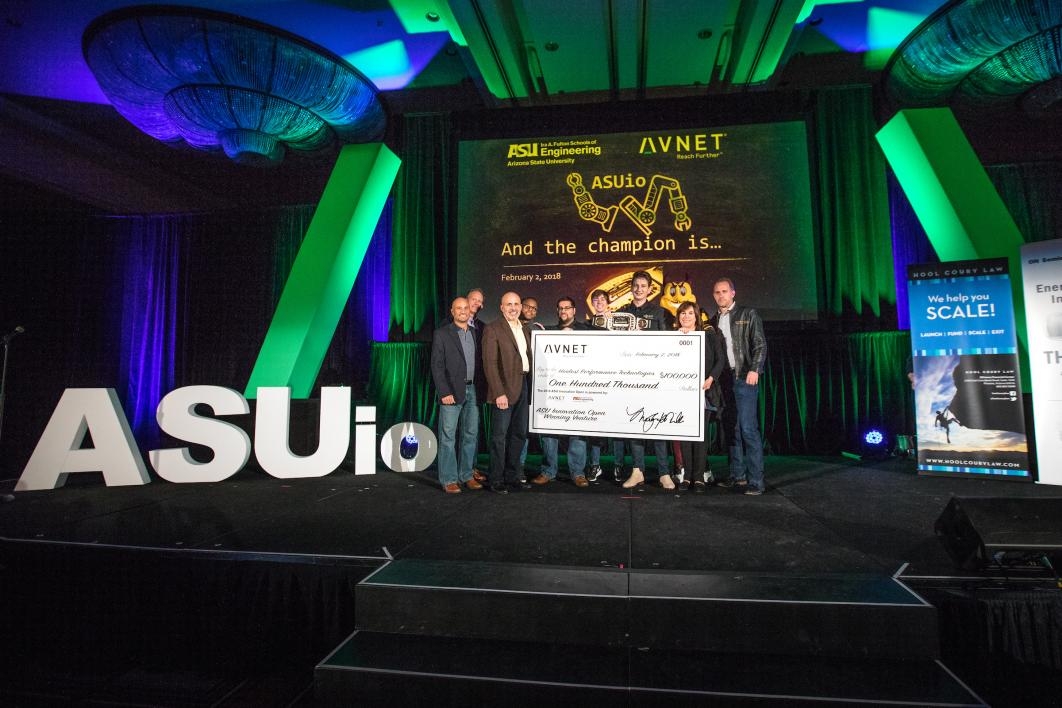 The judges pose with the Hoolest Performance Technology team and its winning check at the ASU Innovation Open finals on Friday, Feb. 2, at the Fairmont Scottsdale Princess Resort.

Hool noted the significance of the pitch competition’s finals being held at the Fairmont Scottsdale Princess, right next to where the Waste Management Phoenix Open is being played. He said that this weekend, the Hoolest team will visit the tournament.

“We’ll go out there this weekend and hang out and find some professionals to help us test,” he said.

The five finalists also received mentoring the past few months from Eric Leahy, an engineer who’s the sales manager for early-stage companies at Avnet. He worked with the teams on different aspects of their business — supply chain, materials sourcing, cost efficiency, manufacturing strategy, pricing, revenue streams — as well as their pitch.

“We try to make them think and refine their business so it’s more attractive,” Leahy said.

Leahy said he’s amazed by what the students have created.

“It makes you feel very humble but very hopeful that our future will be led by these young people who are not just brilliant but also very driven, and didn’t just think up a simple gadget but have created things that have social good and will improve people’s lives.”

The keynote speaker for the event, and one of the judges, was Wasalu Jaco, a Grammy Award-winning rapper who goes by the name Lupe Fiasco. Jaco also is an entrepreneur who founded an independent record label and two clothing lines.

“It’s a beautiful thing to go through that chaos with the intent of bringing something useful to the world,” he said, but entrepreneurs have to think of more than making money.

“It’s love,” he said. “It’s a challenge. Where is the metric for love in what we do?

Jaco noted that one of the most significant entrepreneurial ventures of all time was the slave trade.

“There can be a dark side of entrepreneurship. You really have to think about love and ‘How can I incorporate some love into what I do?'"

Top photo: Hoolest's Nicholas Hool, along with other members of his team, pitches their anxiety-reducing project at the ASU Innovation Open finals on Friday, Feb. 2, 2018, at the Fairmont Scottsdale Princess Resort. Photo by Charlie Leight/ASU Now

Courtney Ekmark scored a game-high 15 points and Robbi Ryan had 14 to help the Arizona State women's basketball team to a 61-41 win over Washington on Friday. ... Courtney Ekmark scored a game-high 15 points and Robbi Ryan had 14 to help the Arizona State women's basketball team to a 61-41 win over Washington on Friday.