Everyone gets nervous or anxious about something. You know the feeling. Your heart starts pounding, your body tenses up, maybe you start sweating and you feel like you can’t get through that speech or interview or match.

For Nicholas Hool, high-level sports in high school were a big source of anxiety. As a competitive golfer traveling the country for national tournaments, he often experienced performance anxiety before matches. 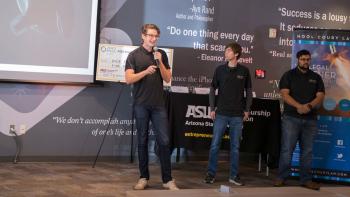 “Nerves are part of any sport, and generally a good thing, but when you can’t control your nerves it starts affecting your performance,” Hool said. “It’s not that I forgot how to play golf, it was a mental thing.”

Psychology coaches helped him relax through visualization and meditation, but Hool was more interested in the physical side of stress.

“I was interested in what is physically going on inside your brain when you’re in that peak performance state versus when you’re extremely stressed, and what that difference is,” Hool said.

Using the body's own stress-relief

In his graduate studies, Hool is working with William “Jamie” Tyler, an associate professor in the Fulton Schools and neural engineering expert, to study vagus nerve stimulation in an effort to create a device that reduces the effects of performance anxiety, stress and nervousness.

The vagus nerve is part of the peripheral nervous system and controls the body’s natural relaxation response — the parasympathetic response — and is the opposite of the body’s fight-or-flight response. When the vagus nerve is stimulated, the parasympathetic response activates and causes your whole body to slow down. Heart rate and blood pressure drop, and even muscle tension subsides.

Part of the vagus nerve loop throughout your body runs up your neck, past your ears and into the brain. Scientific studies have shown that inserting an electrode into the ear — just like an earbud is used when listening to music — and running electrical current through it can activate the vagus nerve and cause that relaxation response.

Unlike drugs used for anxiety, vagus nerve stimulation uses the body’s own relaxation response and poses little risk. The electric current can be uncomfortable on the skin, but otherwise Hool said studies show it’s not dangerous to your heart unless you have an underlying heart condition, and it doesn’t cause additional symptoms if you’re already relaxed.

“My first year in grad school I put in all the legwork in doing the research to determine if this was feasible,” Hool said. “Once I figured out that this earbud technology was possible, I set out to find a team that had the talent and capabilities to produce this device.”

A collaborative team with a great idea

Hool founded Hoolest with computer engineering graduate student Sami Mian and electrical engineering undergraduate student John Patterson in May 2017. Hool says having “rock star” ASU engineers like Flinn Scholars Mian and Patterson helping him create the device has proven to potential investors that they can make this idea work.

The team is working to create an affordable, easy-to-use device modeled after regular music earbuds.

“Because the electrode we’re using is the same size and shape as a regular earbud, it’s super easy to design something that looks like a standard pair of headphone earbuds and, ultimately for us, it’ll be a lot cheaper to manufacture,” Hool said.

The design has an added advantage of already being familiar to users as well as discreet, so there’s no awkwardness to using them in public.

When used for 10 minutes, users can experience a relaxing effect that lasts 30 minutes to an hour, the team said.

Similar earbud technology has been around for the past 10 years or so, but existing earbuds on the market today are extremely irritating, Hool said. They are either made of metal, which can deliver a painful shock to the ear, or a softer material that has to be soaked in a saline solution before being placed in the ear. Hool claims his new electrode design will be the most comfortable earbud on the market and will allow millions more people to experience the benefits of the technology.

In fall 2017 the Hoolest team entered the ASU Innovation Open. The $100,000 prize was an attractive funding source to allow them to manufacture a small batch for a private beta run of testing. By the December 2017 semifinal round, Hoolest had prototypes of the device they had been testing themselves.

Hool was nervous before the team’s five-minute semifinal round pitch, and he used a Hoolest earbud prototype for 10 minutes prior to their turn pitching to the judges.

“When I was walking into the building my heart was pounding. I used it for 10 minutes, and once I started talking I felt great,” Hool said, adding that it worked so well when they were finished that he was so relaxed he could have fallen asleep.

They ended up earning $10,000 from that semifinalist round. On Feb. 2, Hoolest will compete in the final round against four other teams for the $100,000 prize. Hool plans to use the device again — just at a lower setting.

Hool believes his startup has been successful so far because of the size of the market and the social impact it could have.

“Every single person in that room could relate to the problem we’re solving,” Hool said. “Three hundred million people in America are familiar with stress and anxiety and would pay to overcome it. That’s the number one reason we got through to the final round.”

Next, Hoolest hopes to progress from their handmade prototypes to working with Avnet to develop the final product and finding a local manufacturer to create a small batch. With a larger supply of Hoolest earbuds they hope to start a private beta test with elite athletes, and then launch a Kickstarter campaign to open it up to the entire world.

He also hopes to conduct additional studies on standard anxiety and cognitive enhancement, as well as how it affects opioid withdrawal symptoms.

“Initially we will market the product for athletes as a consumer product, but in the near future we want to expand into medical markets with high demand, such as opioid addiction treatment,” Hool said. “There are some positive results and studies on how vagus nerve stimulation reduces withdrawals for drug rehabilitation.”

How many bicycles pass through Arizona State University's Tempe campus on a daily basis? How about each year?The answers to these questions have never been quantifiable, but that's about to change.Earlier this month, a pair of bike counters were installed at the Forest/University and Apache/College cross streets (pictured above), changing the game for everyone involved in the transit community."Ou... 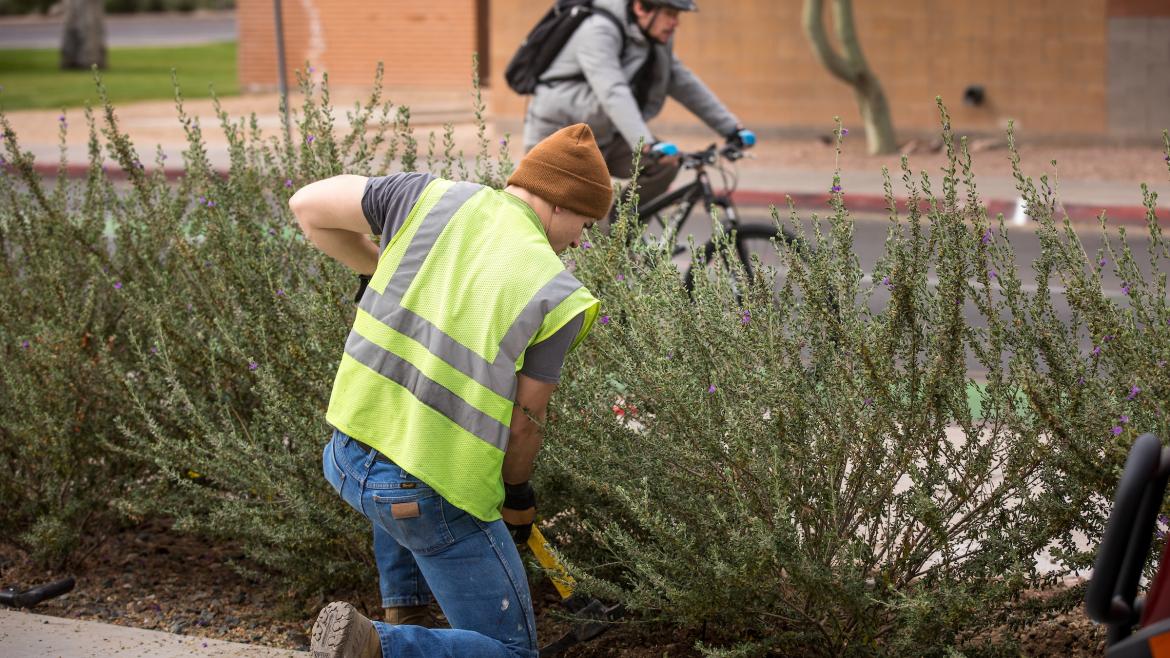 How many bicycles pass through Arizona State University's Tempe campus on a daily basis? How about each year?

The answers to these questions have never been quantifiable, but that's about to change.

Earlier this month, a pair of bike counters were installed at the Forest/University and Apache/College cross streets (pictured above), changing the game for everyone involved in the transit community.

"Our students will use the data to do course work and projects on bicycling in the region," said Trisalyn Nelson, director of ASU's School of Geographical Sciences and Urban Planning at ASU. "It's important to monitor how many people bicycle in order to have an understanding of how changes in infrastructure and policy impact people's willingness to ride."

According to Nelson, bicycle ridership rates are up 17 percent on the Tempe campus. The new counters will document those changes and the reasons that go along with it.

They will also make life easier on everyone involved in on-campus transit.

"The school purchased the counters, and ASU Parking and Transit Services helped install them," said JC Porter, ASU's assistant director of commuter services. "They will definitely help since normally that data is collected by volunteers who have to count the bikes by hand."

Outside of his work with the new counters, Porter also oversees all sustainable transportation resources made available to ASU students. This includes intercampus shuttles and carpooling efforts, discounted public transit passes and of course, biking.

For all of his efforts, he was recently named the 2018 Tempe Bike Hero, an award that will be presented by the Tempe City Council in February. He has also received the President’s Award for Sustainability and the International Parking Institute’s Emerging Leader of the Year award within the past year.

A safer campus, through technology and teaching

The newly installed counters are just one of ASU's current bike-related initiatives.

With some help from the city of Tempe, BikeMaps.org — a web-map founded by Nelson — released a handy guide to show the top 12 locations in Tempe where the most bicycle accidents occur. The guide was finished earlier this month and is a useful resource to decrease the number of bicycle crashes around ASU. "BikeMaps provides an important tool for ASU students to understand bicycle safety," Nelson said. "It's a site where anyone in the world can map a bicycle crash, near miss or hazard. Most incidents go unreported, and we want to use the website to help the region make better decisions."

In addition to the counters and bicycle safety tips, Nelson and Porter aim to further studies in the area with a new partnership between the School of Geographical Sciences and Urban Planning and Parking and Transit Services.

A course in Campus Transportation Planning is slated to start later this year, with a projected start date of fall 2018.

"Students will have the opportunity to work on practical research questions that will help ASU support all forms of transportation," Nelson said. "We will study bike parking, bicycling and walking safety issues, investigate how and why bicycling to campus is on the rise and map the shadiest paths between buildings."

More information on the class will be released later in the semester.

Top photo: ASU Parking and Transit maintenance worker Clayton Brunetti digs a trench for wires that will connect in-ground sensors to a solar-powered sign showing the daily and annual count of bicycles near the intersection of Apache Boulevard and College Avenue. Photo by Charlie Leight/ASU Now