Our ASU Now team covers many groups and events during the year, meeting interesting people and telling their stories in different ways. As videographer I focus on highlighting specific stories with additional multimedia elements, as well as creating video-based stories that stand on their own. It has been a year of fascinating experiences and discoveries as I captured the sights and sounds of Arizona State University.

Here are 38 of our top stories compressed into two minutes.

Let me introduce you to six of my favorite stories from 2017 that I believe help tell our ASU story.

After meeting the co-leaders of the AZLoop team last holiday season, I knew that they were going to make it to the SpaceX hyper loop competition. After a few hiccups and a rush to the end, the team managed to make it to California and show off their work — an impressive effort by ASU, Embry-Riddle Aeronautical University, Thunderbird School of Global Management and Northern Arizona University students that has prepared the next team and for the next competition. The video above was the first in a series of videos that introduced us to the team and their goals to make it to competition. Telling this story required an excellent storyteller, Scott Seckel; a great documentary photographer, Charlie Leight; and myself to truly capture the roller-coaster ride of the year.

An amazing system that creates exact 3-D models in a variety of sizes is located at the Polytechnic School labs and ably managed by engineering associate Eddie Fernandez. Using a GoPro camera for a time-lapse reproduction of the build over four days, we captured the process and spent time learning about the different steps taken to create a model of the asteroid Psyche for the School of Earth and Space Exploration. Media relations associate director Skip Derra and I enjoyed following the process, recording, photographing and writing a story showcasing engineering know-how at ASU.

There are plenty of inventions at ASU that are developed for external partners. Some are put to use, and others are shelved without ever being tested. After doing a few stories with engineering Professor Tom Sugar, we noticed that some of those untested machines were still operational, just waiting for someone to take them out in the field. Reporter Scott Seckel and I picked the pogo pack off the shelf, had the batteries charged and took it out for a hike and an extreme test in the wild. The pack was designed to help soldiers carry weight easily with less stress on the back and waist. We took it out on the Peralta Trail in the Superstition Mountains, proving that the pack worked and that two over-50-year-old men should think twice before doing strenuous exercise.

At the end of "Raiders of the Lost Ark," a workman rolls the ark of the covenant into a huge warehouse filled with thousands of boxes and crates. Believe it or not, there is such a place located on the Polytechnic campus, but the boxes are books — thousands and thousands of them. There are several climate-controlled, fire-proof, hangar-like vaults that are stories high and filled with archived books, manuscripts, maps and the like. It's an amazing place managed by an interesting archival team with a keen sense of humor. Producing this video made for a fascinating summer afternoon in a very cool space.

Off and on for 100 years, Arizona State students have walked up to the base of the golden A on "A" Mountain to announce new Homecoming royalty and pass the lantern from one class to the other. One of the oldest and most popular traditions at ASU, the Lantern Walk is a colorful event that kicks off Homecoming weekend and connects students to the past and the future. There is nothing like a fall night hike with several hundred ASU students to get Homecoming off to a good start.

The Deer Valley Petroglyph Preserve is a unique, understated bridge from our modern world to the ancient. The museum building was built at the base of an earthen dam, spanning the dam’s spillway and directing visitors to a hill covered with petroglyphs from another time. The petroglyphs are special because of the history they portray and the artistry of the work. The museum building itself is a piece of art — modern art — that holds treasures of the peoples that inhabited that place hundreds of years before. It's a great place to spend a Saturday afternoon, learn something new and relax. The preserve is operated by ASU's School of Human Evolution and Social Change.

Sebastian Husein, a scholar in the Quantum Energy and Sustainable Solar Technologies National Science Foundation-Department of Energy Engineering Research Center, won the NSF’s Perfect Pitch competition at its biennial meeting. This marks the second straight time that a QESST student from Assistant Professor Mariana Bertoni’s group has won the $5,000 prize and brought back the Lynn Preston tro...

Sebastian Husein, a scholar in the Quantum Energy and Sustainable Solar Technologies National Science Foundation-Department of Energy Engineering Research Center, won the NSF’s Perfect Pitch competition at its biennial meeting. This marks the second straight time that a QESST student from Assistant Professor Mariana Bertoni’s group has won the $5,000 prize and brought back the Lynn Preston trophy.

Husein, a materials science and engineering doctoral student in the Ira A. Fulton Schools of Engineering at Arizona State University, had only 90 seconds to pitch his idea of deploying PV modules to places with interrupted infrastructure, but that was enough time to win over the panel of judges. 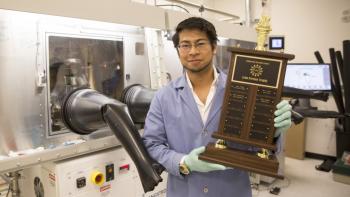 “The idea really sprung out of the hurricanes that hit Houston, Florida and Puerto Rico,” Husein said. “It’s a massive humanitarian crisis, especially in Puerto Rico, and the largest needs became obvious very quickly: power and drinkable water. I wanted to highlight an idea that could address both these issues, and the versatility of solar energy is well suited for that.”

Bertoni, his mentor and professor, and with the DEfECT Lab worked with Husein to develop his idea and perfect his presentation.

“Her enthusiastic support and encouragement is what allows Pablo [Coll] and I to take part in and achieve a lot in competitions like Perfect Pitch,” Husein said. Pablo Guimerá Coll won the competition in 2015 with his project, “Sound Assisted Low Temperature Wafering for Silicon Modules.”

Bertoni, an electrical engineering assistant professor, believes the communication skills used in pitching ideas, a key factor in this competition, are important for engineers.

“Being able to convey complicated ideas in a simple way is a skill that I think every engineer should have,” Bertoni said. “I strongly encourage my students to develop their communication skills and find the right balance of what to say and how to say it based on their audience.”

This win was a step forward for Husein, who is optimistic for the future of renewable energy.

“I’m incredibly excited to see what our society does with renewable energy,” Husein said. “Some say our dependency on fossil fuels will remain for decades and decades, but we’ve already had massive amounts of solar integration.”