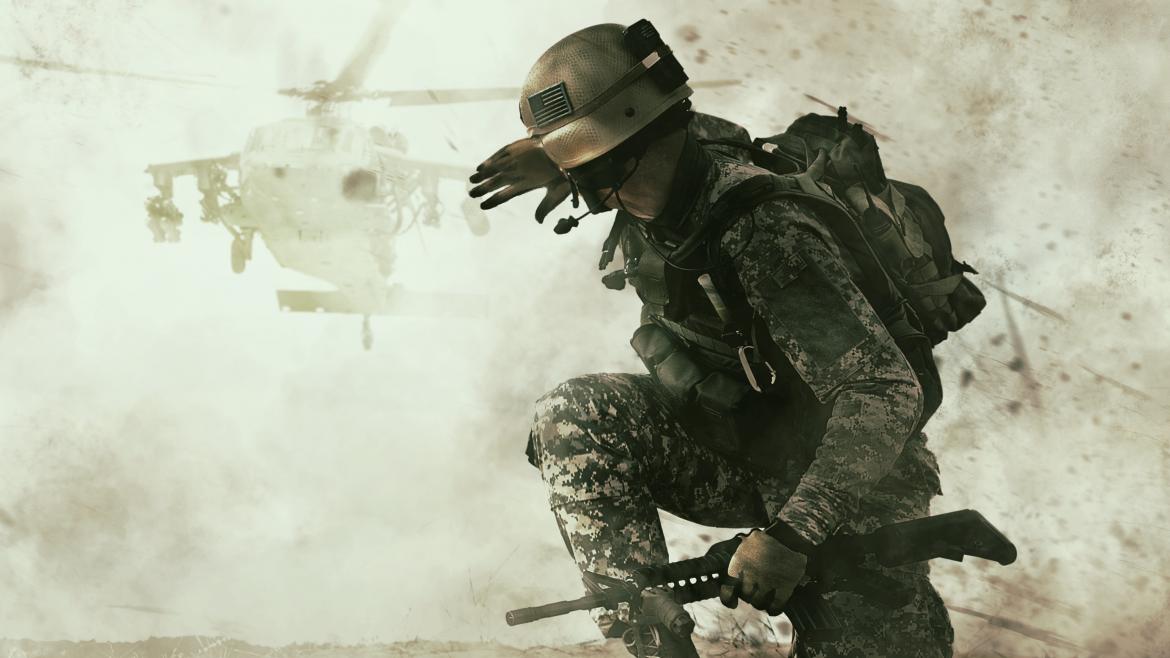 Looking at war, technology and identity from a moral perspective

Brad Allenby has collaborated on various endeavors to comprehend the broad societal impacts of our use of powerful new technologies as military weaponry. Now he has a role in an effort to probe into a more personal toll that battlefield experiences can take on the human condition.

His latest books — “Weaponized Narrative: The New Battlespace, Future Conflict and Emerging Technologies” and “The Applied Ethics of Emerging Military and Security Technologies” — reflect the depth of his examinations of such topics.

He has now joined a group of colleagues to delve into a different kind of challenge stemming from an effect of warfare that has been described as “moral injury.”

Allenby is co-chair of the recently established Moral Injury Initiative, led by the Center on the Future of War, a joint venture of ASU and New America, a nonpartisan public policy think tank.

The initiative’s project focuses on the study of the long-term debilitating psychological distress resulting from trauma triggered “when one’s sense of personal honor and even identity are tainted by the extreme hostilities and atrocities of war,” Allenby explained.

“You go into the military with a particular set of ethical values, but those values can get tested and shaken” when you are caught up in prolonged, intense and chaotic battlefield environments, he said.

“When you’re in the midst of the violence and chaos of modern combat, when you have to shoot at armed children that enemy forces have recruited as fighters, these things can dramatically unravel your image of yourself as a moral person,” he said.

Beyond the studies to begin developing treatment

That condition was given its definition in the best-selling 2016 book “What Have We Done: The Moral Injury of Our Longest Wars,” authored by David Wood, who is now a Senior Fellow with the Center on the Future of War at New America.

Allenby, a U.S. Army veteran, was in Washington, D.C., in November with Wood, along with leaders of the ASU center, the think tank and military officials, chairing a conference titled “Moral Injury: Toward an International Perspective.”

The event spotlighted the release of a report with the same title, edited by Allenby and others, and provided the opportunity for a public statement about the goals of the Moral Injury Initiative, which also involves scholars and researchers at King’s College in England and the University of New South Wales in Australia.

“We want to lay the groundwork for understanding moral injury in a systematic way across different cultures and as part of a broader insight into human psychology and identity,” Allenby said.

Out of that work, the hope is to “take it beyond the studies and to generate ideas for preventing moral injury and helping the people it is impacting to overcome it,” he added.

“Brad is an exceptionally innovative, creative and interdisciplinary public intellectual. He has the ability to engage on complex issues such as moral injury with clarity, eloquence and grace,” said Daniel Rothenberg, co-director of the Center on the Future of War and a professor of practice in ASU’s School of Politics and Global Studies.

Rothenberg sees Allenby as “a consummate collaborator” who he is confident can “deftly manage a project with multiple contributors from three continents.”

Like post-traumatic stress disorder that afflicts many military-combat veterans, moral injury affects not just soldiers but their families and communities. So Allenby and his collaborators see their project as part of a broader humanitarian mission.

The issues surrounding moral injury “tie into many other things affecting our culture and our own social and political sense of identity,” Allenby said.

Moral injury “is one of many related things that are coalescing to shape us,” said Allenby, who teaches in the School of Sustainable Engineering and the Built Environment, one of the Fulton Schools.

He points out how new technologies and their increasing capabilities are altering our outlooks, behaviors and relationships to each other on a global scale, in both positive and negative ways.

From that perspective, the study of moral injury fits in with his longtime efforts to understand the social and ethical implications of our uses of science and engineering.

Today, Allenby said, our pervasive and rapidly advancing technologies — whether they are used in actual armed conflict or in cyberspace or social media — “can put us into a kind of battlespace,” where both our personal and communal identities can be challenged and sometimes undermined and even demoralized.

There is increasing evidence of this phenomenon in major recent events such as Britain’s Brexit election and the U.S. presidential election, Allenby said.

In those cases, communications technologies that make things like social media and the internet possible were used to quickly spread craftily propagandized messaging and “news”— so-called “weaponized narratives”— to carefully targeted segments of the countries’ populations.

The idea behind all of it, said Allenby, who co-chairs ASU’s Weaponized Narrative Initiative, is to deepen divisions among people by hardening their group identities against each other along political, social, racial and ethnic lines.

The nature of such manipulative technology-aided misinformation campaigns, he said, “clearly confirm that our individual identities have become a battlespace” — the battleground for modern warfare fought with words, images and perceptions.

What might be learned by an engineer and ethicist from a deep investigation into the moral injury identity crisis could shed light on how to guard against the potentially dehumanizing effects of a hypertechnologized world.

Solutions Ira A. Fulton Schools of Engineering Center on the Future of War School of Politics and Global Studies The College of Liberal Arts and Sciences Lincoln Center for Applied Ethics Engineering Politics Military Faculty Veteran

As holiday travelers take to the airways, many will face leaving newly gifted “smart luggage” behind unless it qualifies as a carry-on bag.A growing number of airlines, including American, Southwest and Delta, are requiring that built-in chargers and tracking devices must be removed from all checked bags — and some smart bags do not have removable tech. Effective dates begin between Jan. 1 a...

As holiday travelers take to the airways, many will face leaving newly gifted “smart luggage” behind unless it qualifies as a carry-on bag.

A growing number of airlines, including American, Southwest and Delta, are requiring that built-in chargers and tracking devices must be removed from all checked bags — and some smart bags do not have removable tech. Effective dates begin between Jan. 1 and Jan. 15.

Today, lithium ion batteries (LIBs) power nearly all of our small, portable electronics. But LIBs have their drawbacks, and despite more than 20 years of research, there are no viable alternatives with the required energy densities on the immediate horizon, according to Candace Chan, an associate professor in Arizona State University’s Ira A. Fulton Schools of Engineering.

Chan, who received a 2016 NSF Career Award to research a ceramic replacement to flammable liquid electrolytes used in current batteries, said the most pressing safety issues are related to short-circuiting — the liquid electrolytes catch on fire and initiate chain reactions, emitting gasses and triggering materials decomposition.

Question: Why are lithium ion batteries so popular?

Answer: LIBs are “energy dense.” They can store a lot of charge in a small space, making them lightweight, portable and ideal for powering personal devices like laptops and cellphones.

However, attempts to make batteries rechargeable were unsuccessful because of a tendency for growth of small Li filaments, known as dendrites, during charging. The dendrites would short-circuit the batteries and trigger a process known as thermal runaway, which can lead to violent overheating reactions. This drove the technology to rechargeable lithium ion battery versions, which are more resistant to Li dendrite growth. Introduced in the early '90s, these batteries still power today’s smart devices.

In order to extend the battery life between charges and create a smaller, higher-energy battery, today’s LIBs have twice as much active material and thinner separators, setting the stage for a new generation of heat-triggered recalls. In 2006, for example, Sony recalled nearly 6 million lithium ion packs, and last year, Samsung recalled about 1 million of its Galaxy Note 7 phones due to heat-related explosions.

Q: What are the actual risks of an LIB overheating incident?

A: When a LIB overheats, the components inside are at risk of decomposing and undergoing a series of reactions that can generate even more heat and gaseous products. Additionally, the liquid electrolyte that enables Li ions to shuttle between the electrodes is made up of organic chemicals with high volatility and flammability. However, despite high-profile cases of heat-related LIB incidents, the overall failure rate is extremely low, with a probability of incident for mass-produced cells that is estimated at less than one in 10 million cells to 1 in 40 million cells, according to the U.S. Department of Energy’s National Renewable Energy Laboratory.

Q. What are some of the things consumers can do to mitigate the risks of overheating LIB incidents?

A: The most important safety precaution is to make sure devices that use LIBs are not in situations where they will overcharge or overheat.  There are many safety mechanisms already incorporated into batteries to prevent inadvertent charging and excessive current. They also can signal abnormal conditions such as pressure increases within the battery or battery temperature exceeding ideal upper or lower limits. However, there are still many good practices that consumers can do to protect their batteries.

Q: What should be the focus of battery safety research, and what are you focused on?

A: As we move toward relying more on LIBs for everything from powering electronic devices to electric vehicles, it becomes increasingly important to find alternatives to the rather thermally unstable components in existing batteries while ensuring that the devices maintain the desired electrochemical properties.