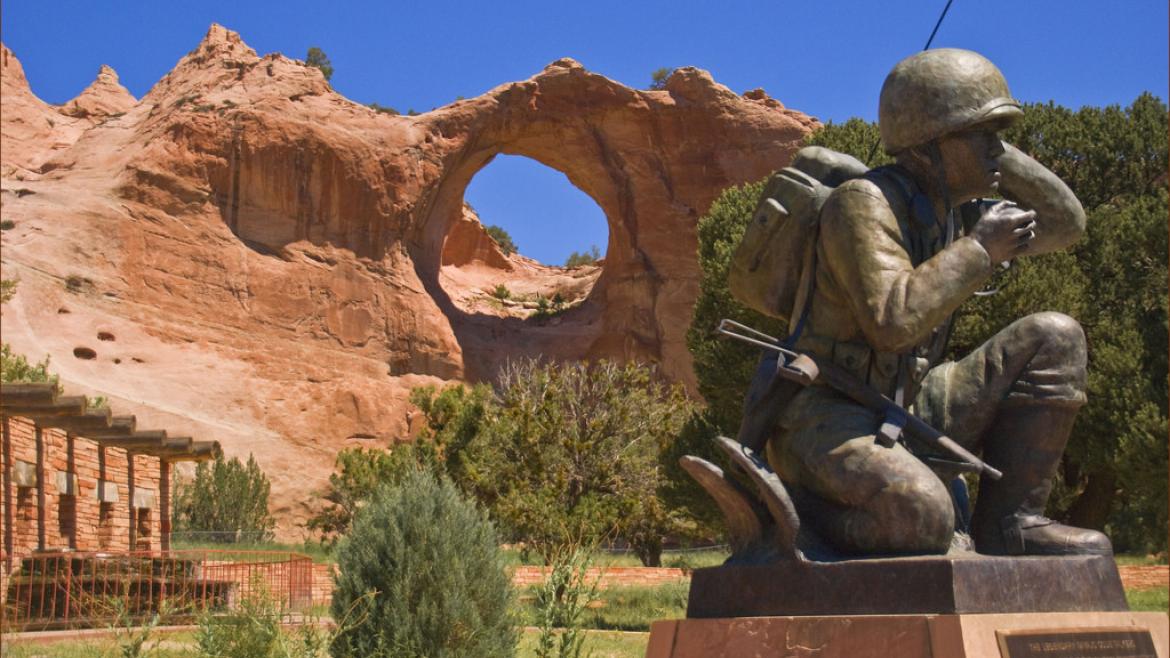 Once sworn to secrecy about their cryptic contributions to U.S. military battle, some former hidden heroes are now decoding the details of their efforts for historical posterity.

The last living members of the World War II Navajo Code Talkers are calling for the creation of a national museum to honor the memory of their elite band of brothers. It’s a recognition many, including Arizona State University Professor Laura ToheTohe is a professor in ASU's Department of English and the author of several books, songs and plays. In 2015, she was honored as the Navajo Nation Poet Laureate in celebration of her work as a poet and writer. , say is long overdue.

“Outside of the tribal community, Navajo Code Talkers are deeply admired,” said Tohe, whose father was himself a Code Talker. “People are curious about their contributions and how they used the Navajo language to save many lives.”

Under special classification by the military, Code Talkers were forbidden to talk about their covert service in the first and second world wars until the program was declassified in 1968. However, even after declassification, it still took years before the Code Talkers began to find their place among retold stories of American patriotism.

Tohe shed some light on that history in her 2012 book “Code Talker Stories,” which details the war experiences of these soldiers. And, with the recent honoring of a group of Code Talkers at a White House ceremony where the petition was made for a new museum, Tohe shared more background with ASU Now on the history that has elevated recognition for Code Talkers in recent years. Question: Who are the Code Talkers?

Answer: The Code Talkers were Marines from several tribal nations who used their native languages to devise a military code during WWI and II. Among them are the Hopi, Comanche, Choctaw, Creek, Chippewa, Meskwaki and Lakota Code Talkers. The Navajo Code Talkers are the most well-known. They used the Navajo language to devise a secret code during WWII to send sensitive messages over the radio waves that was never deciphered by the Japanese. It was quick, accurate and saved many lives in the South Pacific where they fought in many battles.

Q: Describe the life of a Native American man during WWI and WWII. What would be the incentive or motivation to serve in those wars when they were not considered citizens of the United States during those years?

A: Life on the indigenous homelands were difficult. Based on my grandmother’s stories, disease was rampant in the schools on the Navajo reservation during part of WWI. She saw many of her classmates succumb to the disease in school. During this time, Native peoples still spoke their native languages and may have learned English in school, if they attended. Because of poverty, lack of economic sustainability on the homelands, continuance of warrior traditions, patriotism and an enduring belief in protecting America, indigenous men enlisted or were drafted.

I was surprised to find in my research for my oral history book that admiration for the military uniform also led some to enlist when the recruiters came to their schools. While indigenous peoples enlisted in the military in great numbers, and still do, they were not given citizenship until after they returned from military service. The Navajo Code Talkers did not have voting rights in Arizona until 1948, after WWII ended.

Q: How were Code Talkers received inside their tribal communities after their service?

A: Native people have always honored their warriors since before contact. A warrior’s role was to protect, guard and engage in battle with the enemy when it was needed. The Code Talkers took on these responsibilities that earned them all the recognition they receive for their bravery and courage. They returned home as honorable soldiers to their families who were happy and grateful to have them home. The Navajo Nation honors them every year during Navajo Code Talker Day in August and at tribal gatherings throughout the year. They are regarded as the heroes of the Navajo Nation.

Q: Thanks to books like your “Code Talker Stories” and movies like 2002's “Windtalkers,” we are finally getting a more in-depth look at the contributions of the Code Talkers. What other stories would you like to see told about Native Americans in relation to their contributions to American war efforts?

A: I would like to see a film made about the Code Talkers told from their perspective and not Hollywoodized. It should be told with a genuine and truthful sense, acted by Navajo characters and written by a Navajo screenwriter. I’d like to see this film with English subtitles and told with the Navajo sense of storytelling. This film should be made with cultural sensitivity and one that is Navajo-centered. I think this film would appeal to a tribal and mainstream audience.

Relaying tactical information in their native languages by radio and telegraph, Native American Code Talkers were on the front lines of battles in World War I and helped the U.S. to victory during World War II. They were awarded a Certificate of Recognition by President Ronald Reagan in 1982 and received a Congressional Gold Medal in 2001.

When trawlers head out to sea to fish for halibut, tuna and swordfish, fishermen spend hours attaching glow sticks near hooks so fish can see the bait.They’ll go through hundreds and thousands of glow sticks, tossing them overboard when the catch is hauled in. It’s a cost of doing business, like fuel or bait, and it adds to the tremendous amount of plastic trash in the world’s oceans.Now ima...

ASU's Jesse Senko calls reusable lights 'the future of fishing': Cutting down on plastic trash in the ocean while saving money, labor

When trawlers head out to sea to fish for halibut, tuna and swordfish, fishermen spend hours attaching glow sticks near hooks so fish can see the bait.

They’ll go through hundreds and thousands of glow sticks, tossing them overboard when the catch is hauled in. It’s a cost of doing business, like fuel or bait, and it adds to the tremendous amount of plastic trash in the world’s oceans.

Now imagine something different: miniaturized solar-powered lights on longlines and nets that charge on the deck, cut back on labor, save money and don’t end up contributing to marine pollution. They’ll also save bycatchIn commercial fishing, bycatch is a fish or other marine animal that is unintentionally caught in nets while fishing for a different species. of endangered sea turtles and sharks in gillnet fisheries.

“This is the future of fisheries,” said Jesse Senko, a biologist at Arizona State University’s School for the Future of Innovation in Society. “Around the world, they are going to be fishing with solar-powered nets and solar-powered longlines. With a solar-powered light, you don’t do anything. You’re out on the ocean — you have a ton of sunlight, and it’s free.”

It would also contribute toward the marketability of catch. Everywhere from coastal restaurants to mega chains like Target, McDonald’s and Whole Foods tout “sustainably caught” seafood because consumers want it. Fishing gear that doesn’t add to marine trash and helps prevent endangered bycatch helps earn that label.

“They’re doing it because they can make money off of it,” Senko said. “People want it. ... There is more demand than there is supply. Seafood is becoming such a luxury item right now. People are willing to pay a premium for it. They’re willing to pay for it if they know it’s sustainably sourced, if it’s fresh, if it’s local.”

And it’s not yet more government oversight over fishermen.

“The great thing about this is it doesn’t require regulations,” said Senko. “It’s a total bottom-up approach. It’s not the government saying you have to do this or you have to do that. It’s how can we create solutions they want to use? ... They’re only using the light sticks because it’s the cheapest option.”

“What I found was fishermen would not use the lights because of the batteries,” Senko said. “They only lasted a week.”

They were also expensive to fishermen who went out in boats the size of a conference table and used handheld GPS units. Replacing them on a wet deck was another problem.

His father first took him fishing when he was 3. He surf-cast for snapper blues, ate winter flounder for breakfast as a kid, and still keeps a boat on the water in Bridgeport. He majored in fisheries and wildlife sciences at the University of Connecticut, received his master’s in wildlife ecology and conservation from the University of Florida and earned his PhD in biology from Arizona State University.

“That’s what helps with my research,” he said. “I’ve been fishing since I was in diapers. I grew up on the water. I grew up on Long Island Sound.”

Senko considers himself a blue-collar PhD.

“To me it’s a source of pride I’m not an academic who just stays in his ivory tower and lectures about how bad fishermen are and how the world is ending,” he said. “I like the fact I can roll up my sleeves and go work with these guys.”

He has to develop a technology that doesn’t exist. Right now the goal is to get something solar-powered that works. Senko is partnering with ASU’s Solar Power Laboratory and NOAA Fisheries to develop it.

He recently received a Disney Conservation Fund grant of $50,000 to begin working on it, as well as $45,000 over the next three years from the World Wildlife Fund. He is working on larger-scale proposals for the National Science Foundation and the National Fish and Wildlife Federation. Jesse Senko holds a dorado he caught in the Gulf of California. Senko has been fishing since age 3, and coming up with sustainable solutions for fishermen was a natural fit. Photo courtesy of Jesse Senko

The solar panels have to emit enough energy to light up gear for 12 hours, with potentially minutes of charging time. Solar-panel engineers believe the concept is workable.

“Jesse provided us with a new challenge as saltwater is really hard on any electronics and we also need to be able to survive the pounding of the ocean,” said Stuart BowdenBowden is an associate research professor in ASU’s School of Electrical, Computer and Energy Engineering in the Ira A. Fulton Schools of Engineering. of ASU’s Solar Power Lab. “I’m motivated by the environmental benefits of solar. But solar-powered lights to warn turtles? Now that’s a motivator! Especially cool that Jesse has the data to show the number of turtles saved.

“Normally we think about how to provide terawatts of power for the whole planet. This is at the other end of the scale with only milliwatts needed. However, it came at just the right time as we’d just come up with a new cell design that is ideal for small power applications.”

Senko sees his mission as solving a number of problems while simultaneously increasing opportunity for fishermen.

“You’re reducing global plastic pollution,” he said. “You’re increasing (renewable) energy use. You’re saving endangered species, primarily turtles and sharks. It’s a cleaner fishery. And you’re helping fishermen, who are always blamed. They’re always the bad guys that governments around the world are always cracking down on. It’s not only that. We can then help them market their seafood as sustainably caught. We can help you get into a premium market because you’re using this technology.”