ASU linguistics grad discovers desire to teach through his own learning

Arizona State University international student Meng Wei has a global view of education. The Weifang, China, native appreciates both the subtle and large differences between American and Chinese educational values, seeing benefits and drawbacks of both. 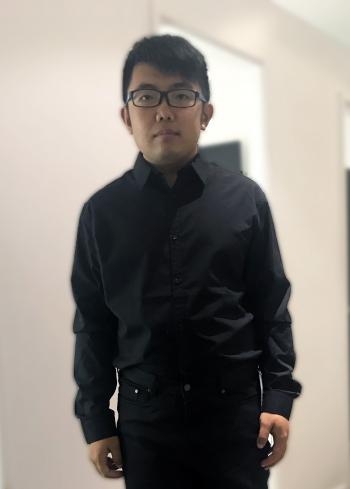 He is graduating with a bachelor’s degree in English linguistics this December and is already admitted into a Thunderbird School of Global Management master's program. He acknowledges that he started out focusing only on his own grades, but soon learned through teaching internships how much he enjoyed helping others learn.

Answer: In the spring of 2016, when I took the course ENG 404: Teaching English for Specific Purposes, I realized that I really did want to teach English. In this class, I learned the definitions of TESOL, ESL, ESP, EOP and many other new things. I also learned a teaching style that was different from the Chinese style. After this class, I felt clearer about my career goals.

A: In China, teachers often scold students for mistakes on work or exams. At ASU, no professors scolded me; instead they patiently helped me get back on track. Another difference between China and the U.S.: Most high school teachers in China correct students’ every mistake. That makes it the teacher’s responsibility. The American teaching style is to let students find the mistakes themselves.

A: My best friend studied at ASU, and he highly recommended the university to me.

A: I am admitted into the master’s program in global affairs and management at ASU for fall 2018. It has nothing to do with teaching English, but that does not mean I did not like teaching! I do still enjoy it, and I hope I can find a teaching job in the TESOL area eventually.

A: I would donate the funds to poorer countries for developing their educational systems.

Editor’s note: This is part of a series of profiles for fall 2017 commencement. See more graduates here.Constant discovery and innovation.That’s how Louis Schoettle describes why he chose to study immunology as part of Arizona State University’s microbiology PhD program from the School of Life Sciences, even though when he started his graduate career, he wondered whether he could take on suc... 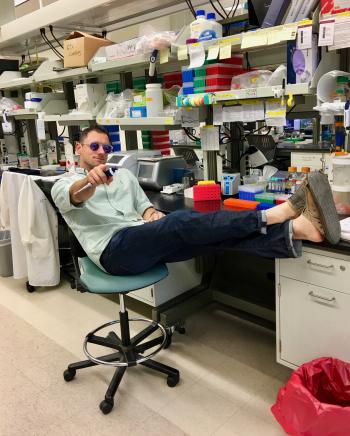 That’s how Louis Schoettle describes why he chose to study immunology as part of Arizona State University’s microbiology PhD program from the School of Life Sciences, even though when he started his graduate career, he wondered whether he could take on such a difficult field. He also wondered whether working across multiple laboratories to master many experimental techniques and skills would be possible.

What he found was surprising, even to a dedicated student like Schoettle.

“It wasn’t learning a new field of science that turned out to be the most difficult aspect of being a graduate student,” said Schoettle, who hails from Portsmouth, Ohio. “What many people don’t realize about graduate school is that while classes are a part of the process, they are in fact a relatively small part. Conducting research, writing proposals, grants and manuscripts, mentoring undergraduate researchers and teaching take up more hours of any given day than actual coursework. Learning to balance all of the aspects of being a graduate student is a skill all to itself, and it is something you are forced to learn extremely early on in your career.”

Question: What was your “aha” moment, when you realized you wanted to study the field you chose?

Answer: Whenever I tell people that I’m an immunologist, I usually either get the “What’s an immunologist?” look, or the “Why immunology?” question. The answer I give them is always the same. Immunology is an extremely young science. In fact, we’ve only really understood what T cells are and how they work for the last 20 years. Every month someone learns a new fundamental truth about how our immune system works. It’s truly an amazing field to be a part of right now.

A: Believe it or not, I never actually planned on attending ASU. In fact, the only reason I even applied was because my master’s adviser pushed me to. During my PhD interviewing process, I had all but signed on the dotted line to go elsewhere. However, I received an offer to interview with ASU and decided to make the trip.

During an interview with my would-be adviser, professor Joe Blattman with the School of Life Sciences, we discussed his lab’s work in T cell immunology and he broached the possibility of a project utilizing a brand-new technology called DNA origami. He talked with me about the possibility of training in multiple labs under multiple disciplines, learning fundamental aspects of immunology and molecular biology, and doing things that had never been done before. It was too exciting to pass up.

A: Write early and often. Ask your adviser to include you on grants, proposals and manuscripts to get as much practice as possible. Try to present at least once a year at a national or international meeting to get your name and work out there and practice your presentation skills.

Finally, ask questions! Ask senior members of your lab, your adviser and your committee members questions as often as you can. I spent almost an entire year trying to solve a problem only to find out that one of my committee members had a solution the entire time. Graduate school is no place for stubbornness!

A: During the last year, my adviser and I have developed and launched a spin-out company called Gemneo Bioscience, based on the technology I was working on during my research. Following graduation, I am taking over as vice president of research and products, working on improving our technology and applying it to new systems.

Q: Are there any special friendships with faculty or classmates that helped you get from point A to point B?

A: I have had great relationships with many of my fellow grad students, but I could never have made it through without a few of them specifically. Megan McAffee and Susan Holechek were the first two members of Joe’s lab. They helped build the lab and really brought me in under their wing and showed me the ropes during my first two years. I still remember my first day in the lab Joe asking me to “Clone the P14 TCR genes”, and me walking out of his office and asking Megan “What is a P14 TCR gene and how do I clone it?!” It’s really sink-or-swim those first few years of school, and without Megan and Susan, there is no doubt that I would have struggled mightily.

Once I progressed to becoming a senior member of the lab, the roles began to reverse. Over the last two or three years I have developed new friendships with current members of the lab, and without their help, the stress of trying to defend would be unbearable. I would specifically like to give a giant thank-you to Kavita Manhas. She is going to make a great immunologist someday, but is now and will always be an even better friend.

A: All scientists deep down are a bit selfish, myself included, in that we believe that our personal research is of utmost importance. It’s what drives our work and pushes us to move forward. That being said, if someone handed me $40 million I would put half of it toward the progress our company is making in identifying rare immune cells capable of fighting cancer and making these cells adaptable for any patient in need.

The other half I would reserve for an endowment, to be used as an incentive to recruit high-quality graduate students to ASU to help build the immunology community that has been growing since my first year here. The battle against cancer and disease is ever evolving, as we develop new and improved technology and therapies the diseases evolve and escape. We need more and more researchers to continue this fight, which means more and more grad students to take over the reins. I truly believe ASU is building something special, and recruitment of great students will be the foundation of continued success.