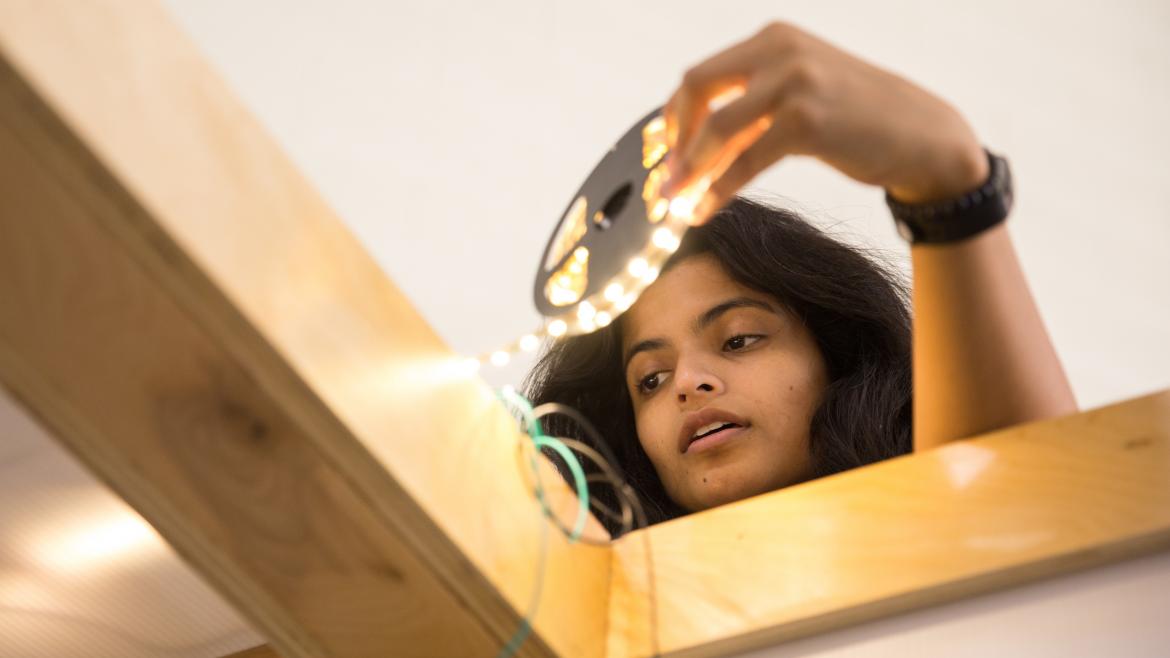 'Pause + Play' structure, a collaboration with schoolchildren, will debut at Mesa festival

What do kids want when they play? A group of interior architecture students at Arizona State University asked 70 sixth-graders, who said they wanted to climb and slide and be immersed in a different world.

And then the ASU students built it.

Their structure, called “Pause + Play,” brings to life the vision of the Mesa schoolchildren and will be part of the free Main Street Prototyping Festival in downtown Mesa on Friday and Saturday.

“The idea of this project was to look at how to establish a dialogue between the community and the profession, and the relationship between culture and play,” said Milagros Zingoni, an architect and the Herberger Institute for Design and the Arts assistant professor who led the class.

The festival, sponsored by the Mesa Arts Center, asked for photographs of finished projects, but Zingoni submitted a proposal to have her ASU students collaborate with the community on an assignment about play.

“Play was a way to find an equalizer. When we play we don’t care about the color of our skin or the shape of our eyes. We all play,” she said. 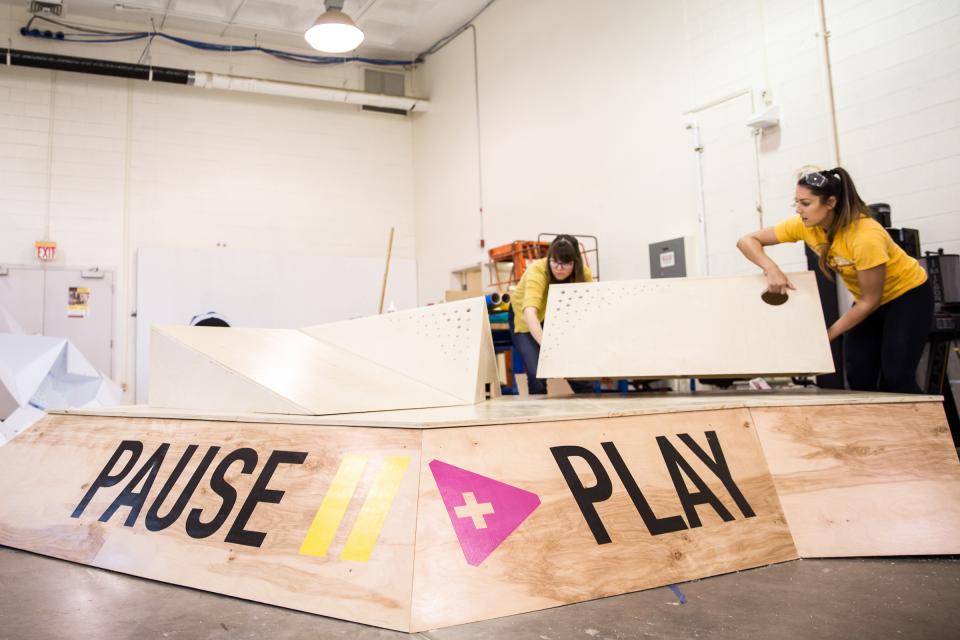 Although time was short, Zingoni had several goals in mind for “Pause + Play.”

The project became a whirlwind for the eight master’s level students in the Advanced Interior Architecture Studio IThe course is part of The Design School in the Herberger Institute for Design and the Arts. course, who did the entire task, from data collection to completion, in two and half months. They began working with the sixth-graders at Porter Elementary School in Mesa in August, asking the kids to interview their parents and grandparents about how they played, and what their favorite play experience is.

Then came the design, based on the kids’ responses. There’s an “immersion” section, where you’ll hear recordings of the kids talking about play, a climbing bench and a translucent canopy inspired by origami. Part of “Pause + Play” is an instrument, designed by students in the School of Music, that creates sound when activated.

At the festival, the Porter School students will get to play on the structure, which is made of wood, vinyl, PVC piping and corrugated plastic. 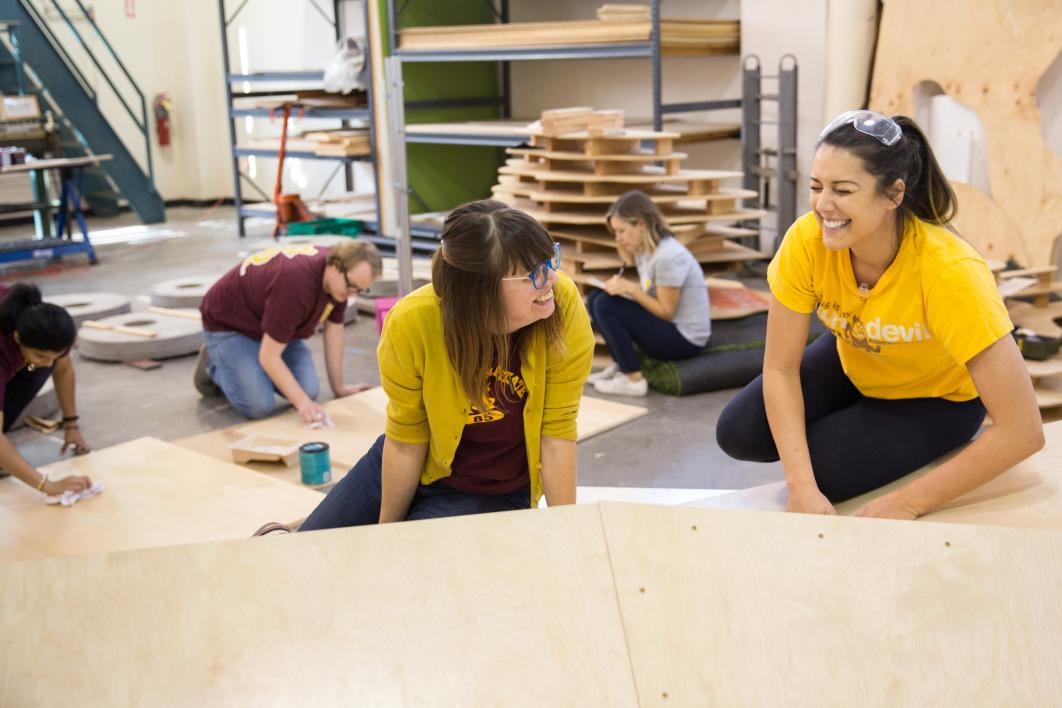 Jen Grysho (left) and Maryam Ali discuss the holes on the bench that they are sitting on while the rest of the team works in the background. The students designing the play structure are pursuing a master's in interior architecture. 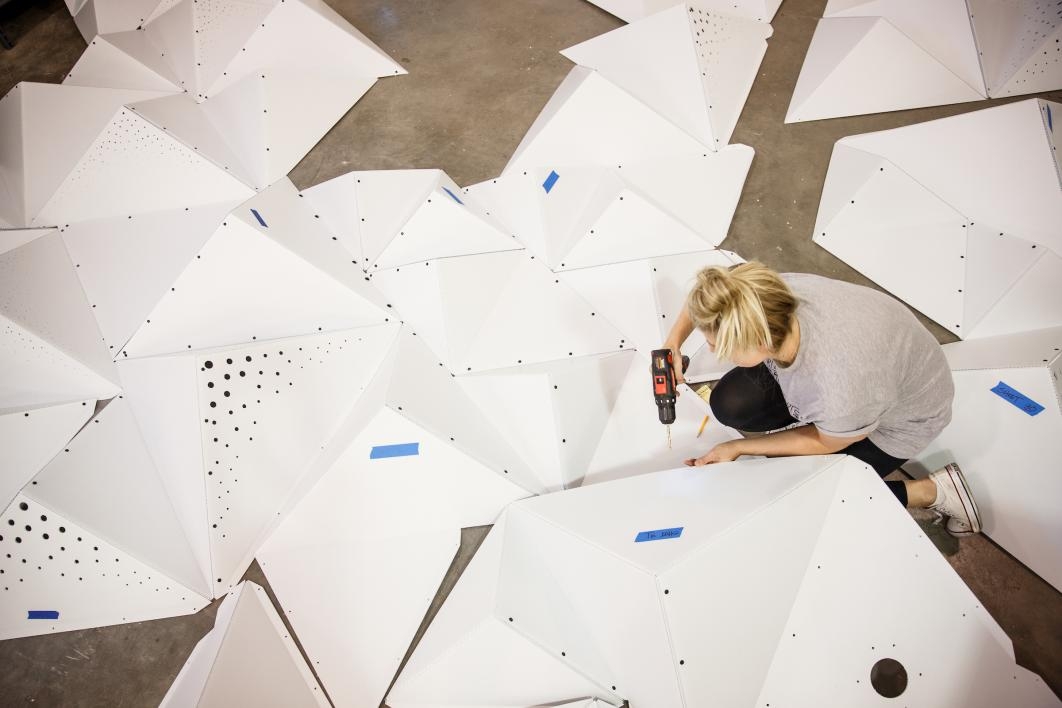 Jessica Tsepal, a master's of interior architecture student and Design School teaching assistant, drills holes in pieces that will create the canopy above the play structure. The holes in the canopy are designed to create a pattern of shadows while the canopy provides shade. Courtney Davis (right) and Jen Grysho cut out labels that will be attached to the sides of spinning cubes as part of the team's "Pause + Play" structure for children. 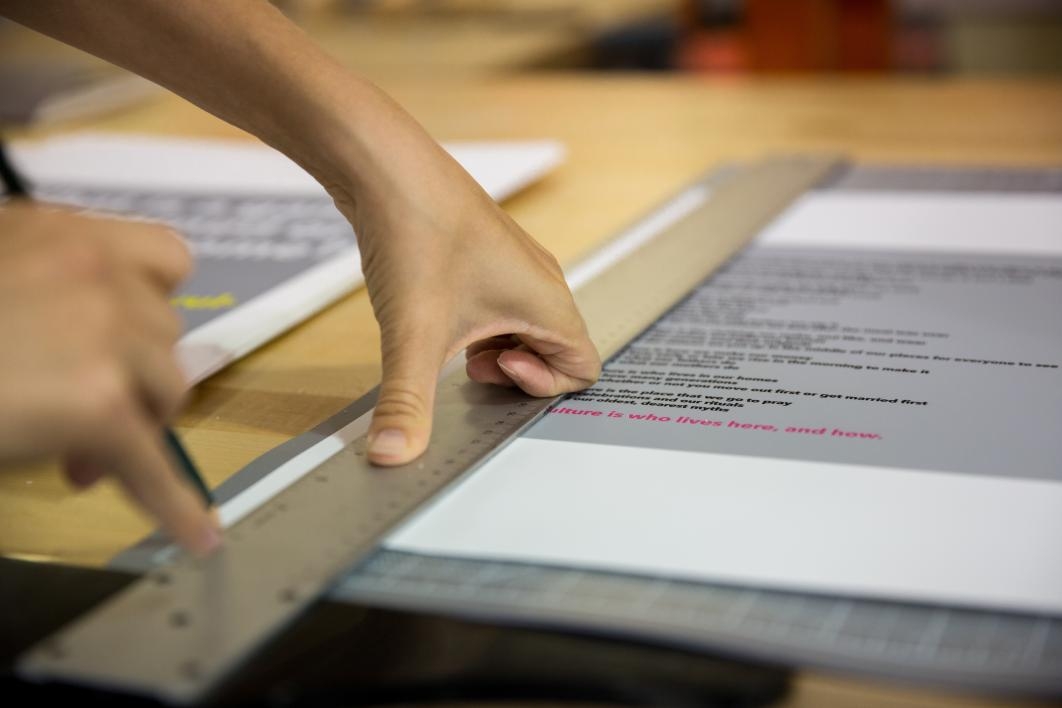 Courtney Davis cuts out labels that will be attached to the sides of spinning cubes on the master's students' "Pause + Play" structure, which will debut at the Main Street Prototyping Festival in Mesa this weekend. 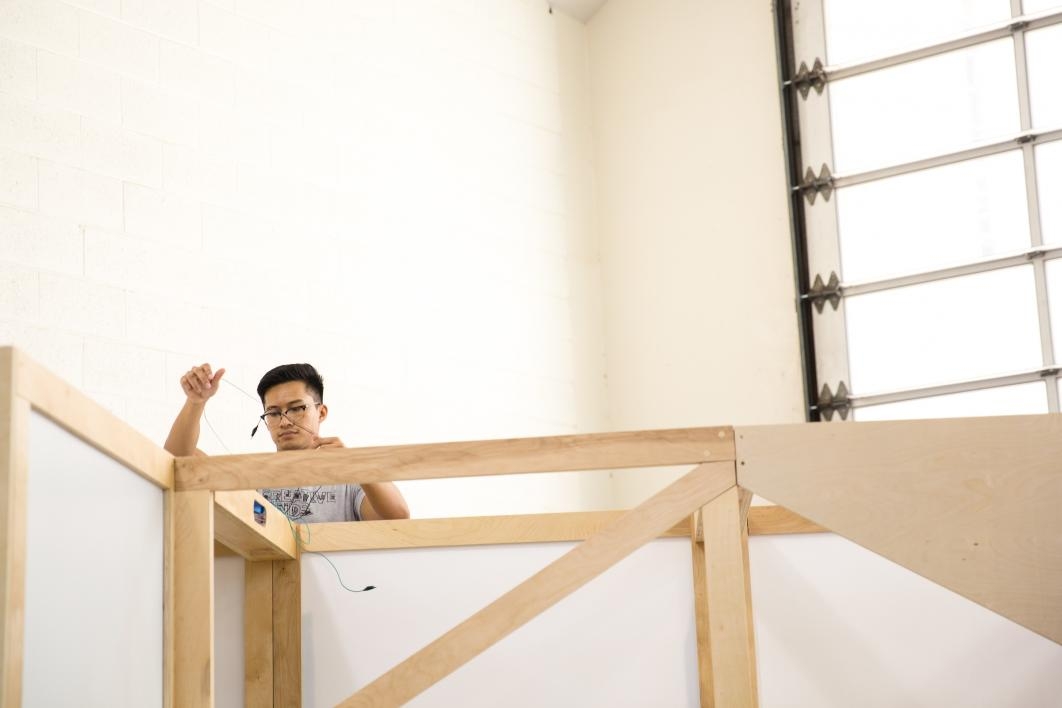 Master's of interior architecture student Joseph Daite attaches alligator clips to an Arduino board to test whether sound will activate when children enter the "immersion" section of the team's play structure.

“We needed to be very strategic,” Zingoni said of the design. “Everything had to fit into a U-Haul truck, able to be assembled in eight hours and disassembled in six hours. We couldn’t make holes in any walls or dig a foundation.”

Construction presented several challenges. The concrete footings needed to be deep enough to support the PVC pipes that are the skeleton of the structure, but at that size would have been too heavy for the students to lift. So instead they created several donut-shaped footings that will be stacked.

The ASU students learned a lot more than design, having to code motherboards, wire for sound, pour cement and use power tools. They also had to be liaisons to the school, collaborate with the School of Music students as well as the children, figure out marketing and meet with the festival officials.

Being able to fabricate the project was key, Zingoni said.

“With most design studios, you’re working in the computer and you have all these beautiful projects on the screen. But then you realize, I can’t make this taller than 8 feet because the material doesn’t come taller than 8 feet,” she said.

“My students were able to learn about full-scale details.”

Courtney Davis, a student in the ASU class, said that working with power tools and learning about fabrication was key.

“I think people think interior design is about picking finishes for inside a building, and they don’t think that we can actually design a structure, put it up and get the details right so everything fits together,” she said.

“We came to the shop with our plans thinking, ‘This is how it will go together,’ and the shop guys would say, ‘Well that’s going to fall over.’ So then we learned about the joint that will make it stand up.”

Zingoni said that typically, a prototype is an object that is tested and, if it works, is mass produced.

“But for me, prototype was a way to test a relationship, to leverage the resources of the university with the community, and to be friendly. Because lately, if we don’t agree, we are against each other.”

“Pause + Play” will be among 20 temporary structures at the Main Street Prototyping Festival that are created by artists, architects, designers, students, makers, urban planners and others. The festival, which also will feature artists and musicians, runs from 5 to 10 p.m. Friday and noon to 10 p.m. Saturday at 1 E. Main St., Mesa. Top photo: Master's of interior architecture student Dalal Altassan tries to decide if the lighting for part of the play structure will look better suspended or taped. Photo by Anya Magnuson/ASU Now

Each year, Arizona's chapter of Financial Executives International (FEI) honors five chief financial officers who have demonstrated excellence in the field of financial management. This year's FEI Nonprofit award was given to Arizona State University's Morgan R. Olsen, who was honored Nov. 9 at the Fairmont Scottsdale Princess Resort. Olsen currently serves as ASU's CFO and treasurer, a position...

This year's FEI Nonprofit award was given to Arizona State University's Morgan R. Olsen, who was honored Nov. 9 at the Fairmont Scottsdale Princess Resort. Olsen currently serves as ASU's CFO and treasurer, a position he has held since November 2008. He guided ASU through the recession, helping the university not only survive but thrive during that period. He was able to recognize areas that needed reorganization while also consolidating departments to adjust for funding changes.

As CFO, Olsen is responsible for overseeing all financial functions at ASU's five campuses. The university currently has over $1 billion in active capital projects in various phases.