Changing the way the nation generates and consumes energy is at the heart of a new NSF grant awarded to Arizona State University and Kevin Redding, professor in the School of Molecular Sciences and director of the Center for Bioenergy and Photosynthesis (CB&P).

The goal of Redding and his research group is to obtain industrial scale algal hydrogen production, a goal that requires an improvement over current technology by at least five-fold. 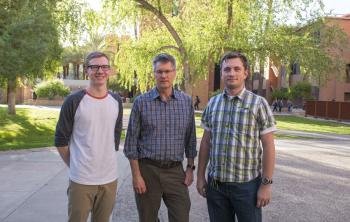 “I do not view hydrogen so much as a fuel, but as an essential commodity that we consume at a rate of over 20 million metric tons per year — and which we now make by steam reformation of fossil fuels, a process that is energy intensive and produces carbon dioxide,” Redding explained. “If we could replace even a part of that with algal biohydrogen that is made via light and water, it would have a substantial impact. However, the state of the biohydrogen field is not even close to where it needs to be in order to be commercially viable.”

“We thought that some radically different approaches needed to be taken — thus, our crazy idea of hooking up the hydrogenase enzyme directly to Photosystem I in order to divert a large fraction of the electrons from water splitting (by Photosystem II)  to make molecular hydrogen."

It is common knowledge that plants and algae, as well as cyanobacteria, use photosynthesis to produce oxygen and “fuels,” the latter being oxidizable substances like carbohydrates and hydrogen. There are two pigment-protein complexes that orchestrate the primary reactions of light in oxygenic photosynthesis: Photosystem I (PSI) and Photosystem II (PSII).

Algae (in this case the single-celled green alga Chlamydomonas reinhardtii, or ‘Chlamy’ for short) possess an enzyme called hydrogenase that uses electrons it gets from the protein ferredoxin, which is used to ferry electrons from PSI to various destinations. The algal hydrogenase is rapidly and irreversibly inactivated by oxygen that is constantly produced by PSII. It is hoped that linking the hydrogenase directly to PSI will mitigate the problems, including the fact that hydrogenase competes poorly for electrons and that it is inactivated by oxygen.

“Using the kinked PSI-hydrogenase concept, Andrey Kanyginthe doctoral student working on the project has managed to produce an engineered alga that gives the best sustained hydrogen production of any alga ever. Working with Alec Smith, a Barrett Fellow of the CB&P, they have produced a new strain that has the highest initial rate ever measured, but later it drops. With this grant, we can hopefully produce an organism with the best of both: high rates that are sustained for long times.”

In a future commercial system, one will want to be able to grow the cells normally at first, and then switch them to a mode in which most of the electrons are diverted to make hydrogen — essentially crossing over from a cheap replicating system to a “biofactory” in which sunlight drives production of hydrogen using water. The proposed systems provide an obvious way to do that by turning on the genes encoding the linked PSI-hydrogenase proteins. Consequently, electrons will be diverted away from carbon dioxide fixation to hydrogen production.

The NSF grant is part of the U.S.-Israel Binational Science Foundation (BSF). In this arrangement, a U.S. scientist and Israeli scientist join forces to form a joint project. The U.S. partner submits a grant on the joint project to the NSF, and the Israeli partner submits the same grant to the ISF (Israel Science Foundation). Both agencies must agree to fund the project in order to obtain the BSF funding. Prof. Iftach Yacoby of Tel Aviv University. Redding's partner on the BSF project, is a young scientist who first started at TAU about 5 years ago and has focused on different ways to increase algal biohydrogen production.

"Iftach is taking very different approaches to this problem, which I see nobody else out there doing. Some of his work is a little controversial, but I think his basic conclusions are sound. We have been talking to each other on and off for a few years, but recently we came to realize that our approaches and skills are very complementary. It is a natural partnership. We are already working on our first two joint manuscripts!"

Redding is also partnering with ASU's Global Institute of Sustainability to develop a module within their Wells Fargo Regional Sustainability Teachers Academy. They are working with Molly Cashion and Robert McGehee, the Academy Program Coordinators.

The team will develop a module on screening algae with an agar overlay method. They will train local middle and high school teachers how to do this in the Academy. They will need only a microwave oven and water bath to perform the assay, and their students will build their illuminators out of a cardboard box using LED strips and AA batteries. Undergraduate student volunteers will bring other materials to classrooms and assist the teachers as needed. Algae are grown on plates, covered with agar mixed with Rhodobacter, and allowed to develop overnight.

The students can image them the next day with their own phone cameras using a small green interference filter provided by the grant. They can then draw their own conclusions about the best hydrogen-producing strains. This plan draws upon concepts from the next-generation science teaching concepts, in which learning is driven by the students’ own curiosity. They will be given only a cursory explanation at first but, as the experiment progresses, the scientists will answer their questions about how things work. The students will be encouraged to experiment with different conditions so as to discover the best algal strains and how to coax them to make more hydrogen. In this way, they become partners in discovery.

Mesa native Autumn Hurlbert was awarded the Rising Star award by ASU Gammage at a VIP Donor Luncheon. The actress is currently playing the role of Portia in the Broadway tour of "Something Rotten!", which recently closed its six-day run at ASU Gammage.“What we really believe in the Rising Stars is that this is the beginning of their career and they are moving on to greater glory,” said Colleen...

Mesa native Autumn Hurlbert was awarded the Rising Star award by ASU Gammage at a VIP Donor Luncheon. The actress is currently playing the role of Portia in the Broadway tour of "Something Rotten!", which recently closed its six-day run at ASU Gammage.

“What we really believe in the Rising Stars is that this is the beginning of their career and they are moving on to greater glory,” said Colleen Jennings-Roggensack, executive director of ASU Gammage. “We’re having them take the name of Arizona along with them.” 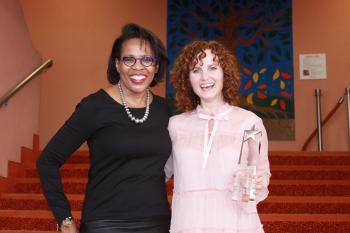 Jennings-Roggensack awarded Hurlbert the award at the luncheon and noted her incredible talent and perseverance.

“Getting to come home to your home theater is prize enough and then to be awarded, I don’t know, it’s indescribable,” Hurlbert said. “It makes all those times when you’re struggling really worth it. It’s kind of a beacon of hope.”

Hurlbert saw her first Broadway musical at ASU Gammage as a child. She grew up in Mesa after moving from Montana at a young age. She attended Dobson High School and found her passion for performing before she moved to Flagstaff to graduate high school.

“This is where, when she was six years old, she came to see 'Oklahoma!',” said Pamela Hurlbert, Autumn's mother. “And she was sitting in her seat belting out all the songs and I had to tell her, Autumn, the people here did not come to hear you sing. They paid to come here and hear the people onstage sing, so now it’s kind of full circle. For her to be up on that stage and people paying to hear her sing is absolutely fantastic.”

ASU Gammage’s Rising Stars usually have a tie to the Arizona community. Jennings-Roggensack believes the Rising Star awardee, like Hurlbert, pass down a legacy to locals when they perform on the ASU Gammage stage.

ASU Gammage has previously awarded the Rising Star Award to other Arizona natives including Krystina Alabado and Nick Cartell. Cartell will be coming back to ASU Gammage with "Les Misérables," May 15–20.

“You know, I actually hope I’m here again to see someone else get it,” Hurlbert said. “It’s such a wonderful thing to pass on. I really love it.”

Hurlbert is on tour with her son and her husband. They joke he is a stay-in-hotel dad. Hurlbert has loved sharing this adventure with her son.

“It’s such a good opportunity to stay grounded and not get too self-centered,” Hurlbert said. “It’s just such a good experience for my son to be growing up in this community because the arts community is just such a loving, generous, familial community. We rarely have to ask for help. People are always lending hands. It’s just so supportive and wonderful.” 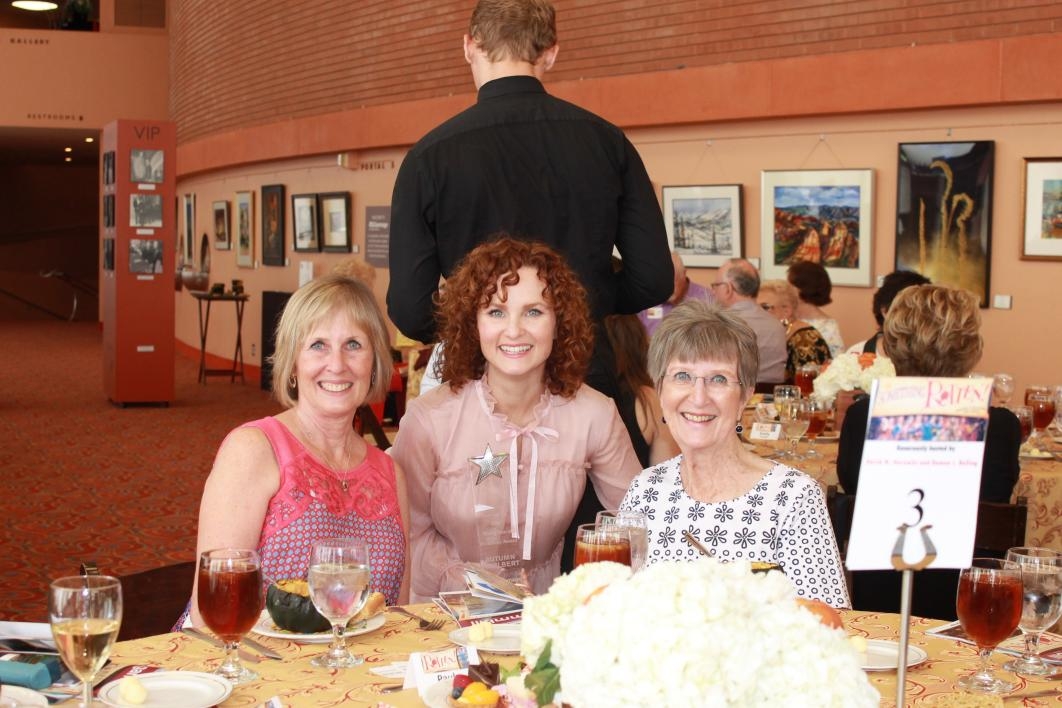 Autumn Hurlbert shows off her award with her grandmother and mother. 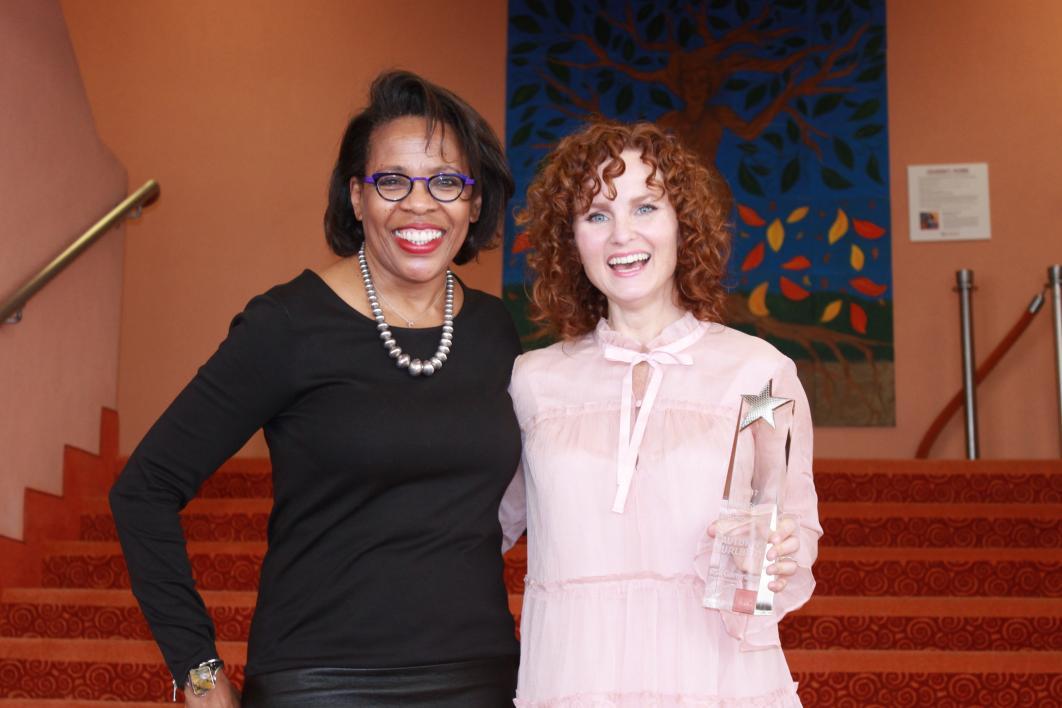 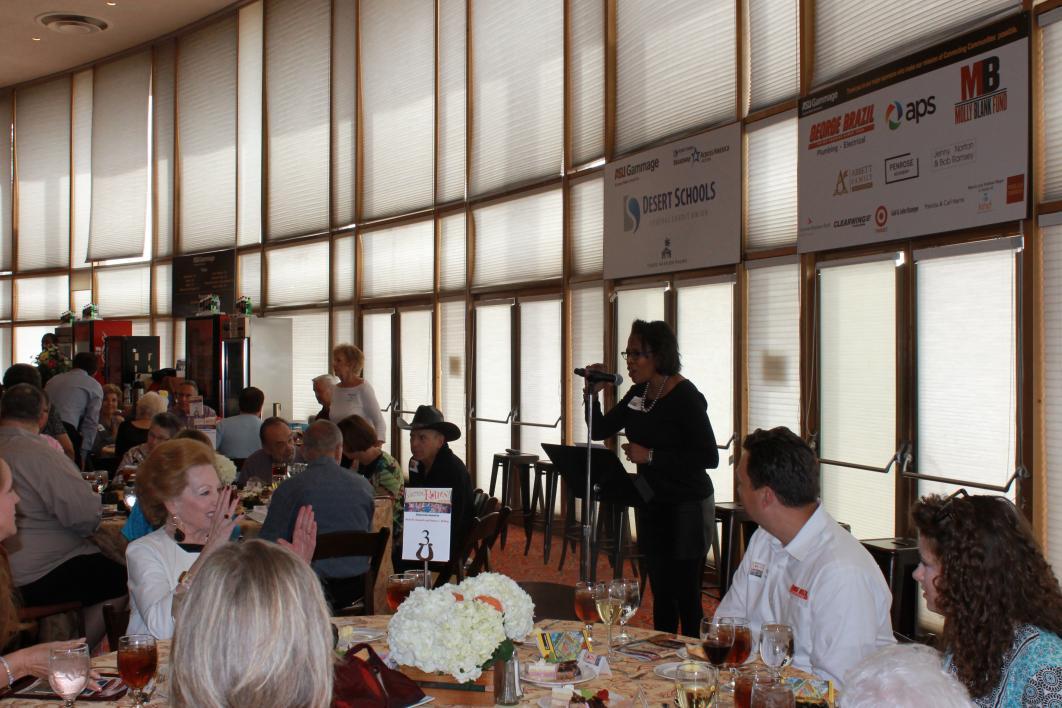 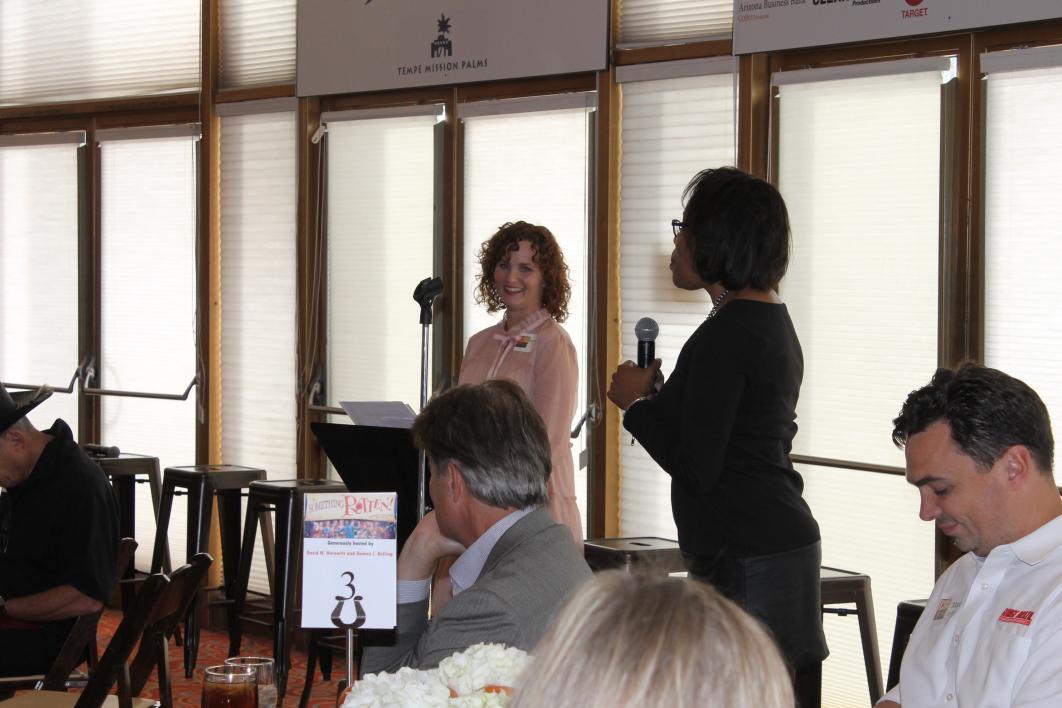 Autumn Hurlbert was awarded the Rising Star Award at a VIP Donor Luncheon during the run of her show "Something Rotten!"