International Standards Organization (ISO) certification has become a common mark of excellence in business, especially in the services and manufacturing sectors, but it’s uncommon in higher education.

Like an Underwriter’s Laboratory (UL) listing for consumer electronics or a Good Housekeeping Seal for household products, ISO 9001 certification signals to a company’s clients and partners that its business practices reliably lead to high quality products and services.

For ASU, ISO certification bridges the gap between the different ways industry and higher education do business, and makes ASU a preferred partner for future projects, according to Sethuraman Panchanathan, executive vice president of Knowledge Enterprise Development and chief research and innovation officer at ASU.

“This accomplishment showcases innovative leadership from KED operations, and affirms ASU’s commitment to its researchers and partners to support and grow high-quality research and partnerships that have a global impact,” he said. “The certification provides a solid quality and service framework to enable our talented people to focus on preventing diseases, exploring the solar system, creating reliable energy sources, and all the other vital work that they do.”

“This certification, and the best-in-class standard it represents, ensures that we provide our researchers, partners and staff members fast, efficient support in the administrative and regulatory aspects of their work,” Deuser said. “We will continue to improve the processes and services we provide to our researchers that help them foster groundbreaking ideas and actions.”

“We want to congratulate ASU on this unique achievement,” said Chris Carson, senior director of strategic business development for DEKRA certification. “The standard was designed to be applicable to all organizations, and they have shown themselves to be a leader in quality for academia.”

Stephen Munk has joined the Biodesign Institute at Arizona State University as deputy director of science and technology. In this role, Munk will focus on the strategic, business and technical operations of Arizona’s single largest bioscience research infrastructure investment.Most recently, Munk was president and CEO of Ash Stevens Inc. in Riverview, Michigan, a pharmaceutical development and m...

Stephen Munk has joined the Biodesign Institute at Arizona State University as deputy director of science and technology. In this role, Munk will focus on the strategic, business and technical operations of Arizona’s single largest bioscience research infrastructure investment.

Most recently, Munk was president and CEO of Ash Stevens Inc. in Riverview, Michigan, a pharmaceutical development and manufacturing company, where he became known for his success in gaining rapid FDA approval for novel therapies. 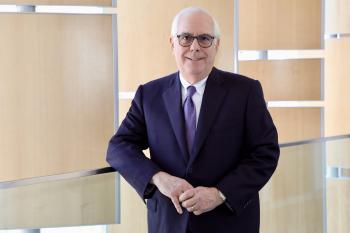 Stephen Munk has joined the Biodesign Institute at Arizona State University as deputy director of science and technology. In this role, Munk will focus on the strategic, business and technical operations of Arizona’s single largest bioscience research infrastructure investment. Download Full Image

“With our aging population and growing threats to our air, energy and water, we need to find new ways to hasten the complicated and time-intensive process that brings new discoveries from the research lab to the world,” said Joshua LaBaer, executive director of the Biodesign Institute.

“ASU has earned its reputation as the top university in the nation when it comes to innovation,” said LaBaer. “Now is the perfect time to engage someone with Stephen’s reputation for taking innovation into the marketplace where it can have its greatest impact.”

Partnering with LaBaer and others at Biodesign, Munk’s primary role will be to help translate scientific discoveries into real-world solutions intended to prevent and detect disease, protect our planet’s natural assets and safeguard national security. He will assist the organization in identifying high-potential partnerships and business opportunities that will lead the growing organization into the next decade. Munk will also work with the leaders of Biodesign’s 16 research centers and more than 100 institute faculty to develop and acquire resources for large, pan-institute scientific endeavors.

“I’m truly excited to be returning to my alma mater and to the university where President Crow has created one of the nation’s leading public research universities,” said Munk. “The dynamic growth of this university and its reputation for innovation is in high-drive, providing a perfect opportunity to return.”

Technology transfer from universities can create high-paying jobs and have a significant impact on area economic development. Since its inception, Biodesign Institute scientists have disclosed nearly 700 inventions, resulting in 97 patents, 53 licensing agreements and 22 spin-out ventures. In its first full decade of operations, Biodesign has had a $1.5 billion impact on the regional economy and supported more than 3,000 jobs. Researchers at the institute currently are studying more than 100 diseases, including cancer, diabetes, Alzheimer’s disease, immune disorders and infectious diseases.

With their game-changing approach to breaking traditional boundaries between biology, chemistry, physics, computing, engineering and mathematics, Biodesign scientists have launched such new technologies as the world’s first mobile metabolism tracker, an effective treatment for Ebola, a $1 diagnostic for Zika, systems for turning algae into clean energy and a diagnostic platform that can detect some 90 diseases with a single drop of blood.

Munk has experience in drug discovery, development and manufacturing both as a scientist and as a manager. A pharmaceutical executive with more than 25 years of experience, Munk left his post at Ash Stevens last year after it was acquired by India-based Piramal Pharma Solutions. He has served on the steering committee of the Chemistry in Cancer Research Working Group of the American Association for Cancer Research, serving as chairman in 2014; the board of directors of MichBio, serving as chairman from 2009-2014; and various grant-review committees for the federal government. He also was a member of the board of directors of the Michigan Opera Theater and the Cascade Hemophilia Foundation. He is currently involved with the Arizona Opera.

Munk’s wife, Barbara, is also an alumna of ASU and is currently a senior lecturer in chemistry at Wayne State University in Michigan, where Munk is an adjunct professor of chemistry. Munk and his wife are co-authors of the book, "Managing the Drug Discovery Process: How to Make It More Efficient and Cost-Effective," published by Elsevier in 2016. Morton Munk, Stephen’s father, has been a chemistry and research professor at ASU’s School of Molecular Sciences for nearly 60 years.