Paola Boivin, the award-winning sports columnist who worked for The Arizona Republic for more than 20 years and now teaches at Arizona State University’s Walter Cronkite School of Journalism and Mass Communication, is being inducted to the Arizona Sports Hall of Fame today. 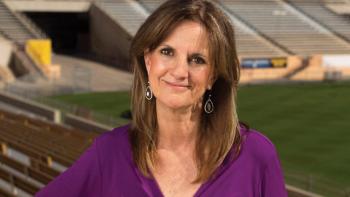 Paola Boivin, the award-winning sports columnist who teaches at the Cronkite School, is being inducted into the Arizona Sports Hall of Fame. Download Full Image

This year’s class is being honored at the Arizona Sports Hall of Fame Induction Ceremony at the Scottsdale Plaza Resort.

“I am floored, especially to be inducted with a group of sports figures that have had such a positive impact on sports in Arizona,” said Boivin, who joined the Cronkite School this year to teach in the expanding sports journalism program.

At The Arizona Republic, Boivin served as one of the main sports columnists. She also appeared weekly on sports radio, did extensive reporting for 12 News, and engaged audiences on social media. She joined the Republic in 1994. Before becoming a regular columnist, she covered sports beats, including ASU football and basketball.

She joined the Cronkite faculty as a professor of practice at a time of significant growth and interest in sports media. The school launched sports journalism degree programs on the master’s and bachelor’s levels in 2015 and also runs summer sports journalism camps for high school students.

“This will be a year I never forgot, from joining Cronkite — a place that so profoundly respects the core principles of journalism — to being honored in the Arizona Sports Hall of Fame,” she said. “Now if I can only learn how to dunk, I will have achieved my life goals.”

Boivin, a graduate of the University of Illinois, was a sports talk show host at KMPC radio in Los Angeles and a columnist for the Los Angeles Daily News before joining The Arizona Republic. Earlier in her career she was a sports editor at the Camarillo (California) Daily News.

She has won numerous awards from Associated Press Sports Editors and National Sportscasters and Sportswriters Association. She also served as president of the Association for Women in Sports Media in 2001.

“For more than two decades, Paola Boivin has been a tremendous journalist and a trailblazer for women in sports journalism,” said Cronkite School Dean Christopher Callahan. “To be inducted into the Arizona Sports Hall of Fame is an amazing accomplishment and a well-deserved honor.”

The Arizona Sports Hall of Fame, operated by the Arizona Sports and Entertainment Commission, honors athletes, coaches, administrators and others who have made significant contributions to Arizona sports. The ASEC is one of the oldest sports commissions in the nation, with the goal of making Arizona the country’s number one sports destination.

“We congratulate each new Arizona Sports Hall of Fame member,” ASEC Executive Director Nikki Balich-Cammarata said. “This class reflects Arizona's great diversity — and each of them has played a role in our state's memorable sports history.”

Catalonia’s official quest for independence from Spain was squashed by the country’s constitutional court Tuesday, temporarily ending the long-simmering separatist movement towards total autonomy.Spain’s central government has now taken direct control of the Catalonian government, sacking more than 100 officials, chasing its former president to Belgium and attempting to restore order to the ... Spain’s central government has now taken direct control of the Catalonian government, sacking more than 100 officials, chasing its former president to Belgium and attempting to restore order to the region.

Catalonia’s bid for succession has placed Spain in its worst political crisis since the 1970s. To gain a better understanding of this complex situation, ASU Now turned to Jeffrey Kassing, a professor of communication studies in Arizona State University's School of Social and Behavioral Sciences who teaches an annual study-abroad class in Catalonia. Question: Can you give us some historical context why Catalonia wants succession from Spain?

Answer: There are several key reasons. First, Catalans see themselves as distinct culturally from the rest of Spain. The history of Catalonia as a European nation state predates modern Spain by several centuries. In fact, Catalonia was a thriving economic/Mediterranean power from the 12th to 15th centuries, which spanned from Barcelona to Naples, Sicily and Athens. Catalonia has its own language derived from Latin that achieved status similar to Spanish, French and Italian during the development of Europe.

Second, there is a history of repression against Catalonia, with their language and government institutions being banned on several occasions. This was particularly evident during Franco’s rule from the late 1930s through the 1970s.

Q: Is there a financial subtext for Catalonia wanting its own government?

A: Catalonia currently and historically has maintained a robust economy. Many Catalans feel that the level of taxation the region incurs does not match the resources re-invested in Catalonia.

Spain would suffer economically if Catalonia would depart. Thus, there is support for keeping Catalonia as part of Spain.

Q: How do Spaniards outside of Catalonia feel about this issue?

A: My impression is that most Spaniards are quite dismissive of the Catalan independence movement. It is not well understood outside of Catalonia, particularly if people do not know the region’s history.

Catalans have a strong cultural identity that is lost on Spaniards generally. This takes the form of maintaining traditional festivals, dances and games as a key part of their culture through active participation in these activities. So their cultural practices aren’t simply folklore that exists in books and museums but rather something that is enacted routinely in public displays. For example, human tower building, or castells, is a unique Catalan sporting tradition. It is practiced widely throughout the region, routinely put on display at festivals and even has a biannual competition that draws the best teams, large crowds and a televised production.

Q: Speaking of sporting traditions, does the role of soccer play a part in this?

A: Yes. FC Barcelona (FCB) has a long and clear association with Catalonia. The team badge carries the Catalan flag on it as does the collar of the team’s jersey. During the Franco regime the stadium was one of the few places large groups could gather. Thus, it became a place where one could go and show their Catalan identity. Although finding itself in a tenuous place at the moment, the club has historically embraced its role and place as a representation of Catalan identity.

A fierce rivalry exists with Real Madrid, the capital club and one that has become synonymous with Franco’s regime and the Spanish state. The rivalry is littered with stories and myths about the advantages Real Madrid received over the years in relation to FCB. So the rivalry between these clubs has mirrored and paralleled the perspective that Catalonia has been persecuted and disadvantaged by the Madrid-based centralized Spanish government.

Q: What do you teach in your class about Catalonia, and what is the work that you do give clarity about this complicated region?

A: The course begins with a focus on Catalan history and culture. We then examine the politics of the independence movement. The final part of the course considers the role sport plays in cultural identity generally, but particularly in Catalonia. The involves a close examination of Barcelona playing host to the 1992 Olympics and the role FCB plays in embodying Catalan identity. All of this is brought together when we visit Barcelona. There we see the distinct art and architecture that makes the city uniquely Catalan. We examine historical sites that remind students of the long history in the region and the struggle against repression (e.g., bomb shelters used in the Spanish Civil War). And we visit the Olympic Village and Museum as well as the FCB stadium and museum.

On the first day of class I ask students to share why they wanted to take the course. Many are interested in studying abroad in Spain. To which, I pose the question, “What if I told you, you weren’t going to Spain but to Catalonia?” This serves to introduce the idea that while part of Spain, Catalonia is a place that sees itself as distinct from Spain.

On the research side, I am preparing to collect data from foreign supporters of FCB related to their impressions of the club and how it represents Catalan identity. This is an exploration of the global brand FCB has developed and the degree to which the club has exported the idea of Catalan identity and independence.