Former secretary of state talks about the state of international affairs at Barrett, The Honor College's Global Leader Series lecture

For the first woman to hold the position of U.S. national security adviser and the second to serve as secretary of state, it should come as no surprise that strength and strategy have always been in play for Condoleezza Rice — especially in the male-dominated world of politics.

Growing up in segregated Birmingham, Alabama, Rice says she deployed tactics she learned from her father to turn racism on its ugly head and used those tactics again when confronted with sexism in her early career.

“My father once told me if someone doesn’t want to sit next to you because you’re black that’s just fine, as long as they move,” Rice told students, faculty and invited guests at the Barrett Distinguished Global Leader Series at Arizona State University on Friday in Tempe. “That was also the attitude that I went in with when people looked at me like I was in the wrong meeting as a young professional. I was never taking somebody else’s sexism or somebody else’s prejudice onto me because when you start doing that, you start thinking ‘I’m victimized’ — now you’ve lost control of the situation.”

Rice’s follow-up advice to emerging leaders who might find themselves in a similar situation: “Walk in there like you mean it, like you believe you belong there because you do; you worked really hard to get there; own the room and they’ll back off.”

The former secretary of state was invited to participate in the Barrett, The Honors College’s new global lecture series by former U.S. Ambassador Barbara Barrett. The two became acquainted in the administration of President George W. Bush. Barrett and her husband, former Intel CEO Craig Barrett, are funding the lecture series and other global initiatives at the honors college as part of their renewed commitment made during Campaign ASU 2020 to their namesake college. The series launched in late September with a lunch meet-and-greet with Elisabeth Rehn, Finland’s first female minister of defense.

Before taking student-submitted questions moderated by Barrett Dean Mark Jacobs, Rice — a noted expert on Russia and current professor of political science at Stanford University — addressed the room of 300 that included Barrett students as well as students from ASU’s Sandra Day O’Connor College of Law and Thunderbird School of Global Management.

Rice offered a background on the current international system, which she described as “chaotic” right now with headline crises in such places as North Korea, Ukraine, Syria, Venezuela and Russia, whose relationship with the U.S. Rice said is in the lowest place it has been since the darkest days of the Cold War.

She said one of the more pressing threats facing the international system right now is the rise of populism, which has had its echoes in Brexit and in Austria and Germany where right-wing populist parties have gained prominence — an event not seen in such frequency since World War II. She also cautioned against the expansion of identity politics, or the idea that everybody is an ever-smaller identity group — each with its own grievance and narrative that tends to divide instead of unify.

On those subjects, Rice called on ASU students to use their time in college to become a part of the solution by finding a passion and acting on it. Passion is something Rice said she found in international politics after coming to grips with the reality that she wasn’t going to be a concert pianist (her first love) or an English literature major (no love lost there). Her message resonated with many of the students in attendance, including Ceci Shell, a first-year law student.

“It was finding that passion that led me to go to law school. So for someone of her caliber — the secretary of state — telling us young people that ‘you too can be that global leader and that change when you find that passion’ really meant a lot to me,” Shell said.

A former athlete now studying sports law, Shell said she had hoped to also ask the former secretary a question about her passion for sports. Rice is well known for her love of football and golf and was recently named chair of the new NCAA Commission on College Basketball.

“Hearing her talk about the importance of going in with confidence and knowing what you want and understanding — that it’s not necessarily you who has to change and conform but to make yourself aware of your surroundings and be confident with those surroundings — was very uplifting and inspiring,” said Maroofi, a sophomore studying biomedical sciences and global health with a minor in French.

Edward Nolan, also a Barrett student, said he was excited when he got a chance to move up to the front row to listen to Rice.

“I don’t know where we’d get this but at Barrett at ASU,” said Nolan, a junior studying political science and biology with an emphasis in genetics and cell development. “She spoke a lot about what we’re learning right now. It was great to hear all of the different areas that she mentioned from just having studied them and from having personal experience. My family is from Colombia, and right along the Colombia border is Venezuela and we talked a lot about the humanitarian crises that are going on along that border.” 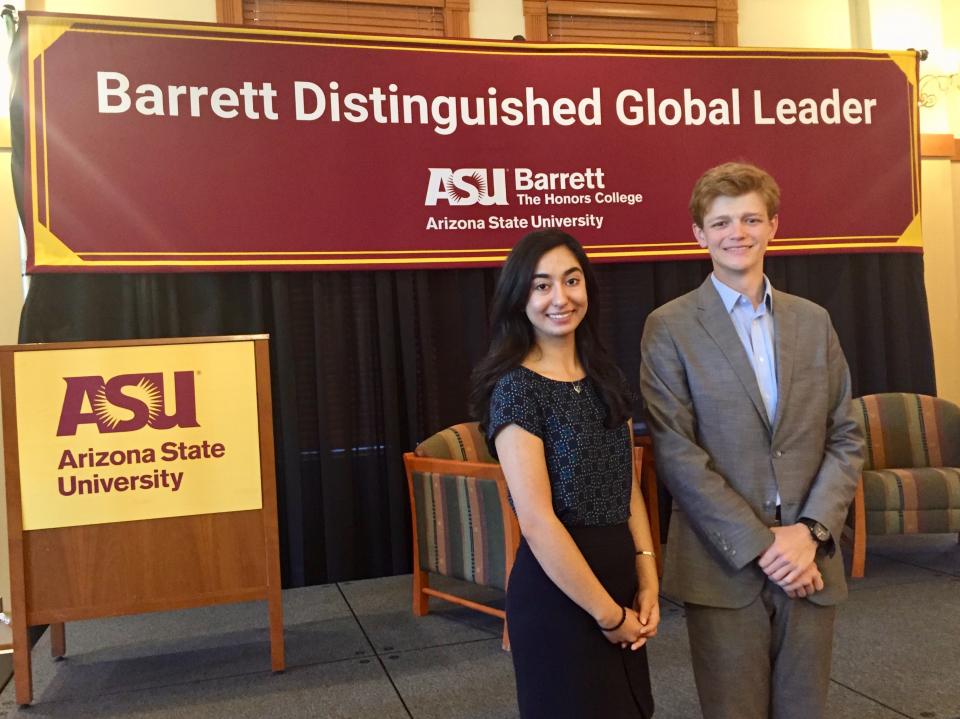 The students say they are looking forward to interacting with more global leaders in the Barrett Distinguished Global Leader Series.

“I think the topic of globalization for college students is very crucial, especially at ASU,” Maroofi said. “We are very passionate about various topics in the Barrett Honors College and being able to combine all of these topics and areas of study into this globalization series is a key aspect to Barrett and the future of our students here.”

In addition to her professorship at Stanford University, Rice is also the Denning Professor in Global Business and the Economy at the Stanford Graduate School of Business, the Thomas and Barbara Stephenson Senior Fellow on Public Policy at the Hoover Institution and a founding partner of RiceHadleyGates LLC. She served as the 66th secretary of the State of the United States from 2005-2009, the second woman and first African-American woman to hold the post. Rice was also the first woman to hold the position of national security adviser from 2001-2005.

Arizona has the eighth-largest migrant student population in the U.S. but only about 20 percent make it further than high school. The College Assistance Migrant Program (CAMP) at Arizona State University wants to see that deficit become history.Since the federally funded program launched at the university last fall, it has made a big impact on students’ lives, providing essential academic, finan... 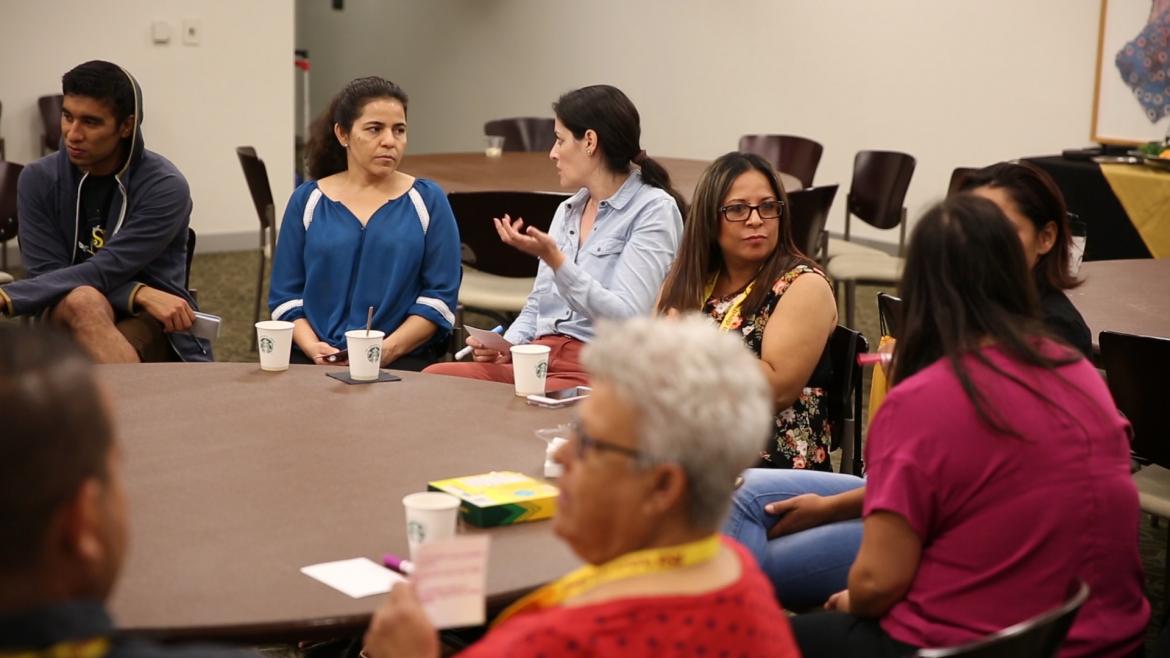 Arizona has the eighth-largest migrant student population in the U.S. but only about 20 percent make it further than high school. The College Assistance Migrant Program (CAMP) at Arizona State University wants to see that deficit become history.

Since the federally funded programThe College Assistance Migrant Program is a 45-year-old U.S. Department of Education-funded initiative to provide academic and financial support to students from migrant and seasonal farmworker backgrounds. launched at the university last fall, it has made a big impact on students’ lives, providing essential academic, financial and emotional support to help them succeed.

“If not for CAMP, I wouldn’t be here,” computer systems engineering freshman Wendy Lara said matter-of-factly.

Despite the success of its first year, ASU CAMP Scholars director Seline Szkupinski-Quiroga saw an opportunity for the program to reach more of those in need of the critical resources it provides.

At group meetings, she heard from CAMP Scholars who told of the difficulties they’d had filling out their FAFSAThe Free Application for Federal Student Aid is a form that is prepared annually by current and prospective college students in the U.S. to determine their eligibility for student financial aid., or registering for the right courses. Not only were they in uncharted territory working all that out as high school students, many of their parents were, too — the majority of CAMP Scholars are first-generation college students.

“We just thought that this information needs to be getting to them before they get here,” Szkupinski-Quiroga said, “before they’re at the point of applying.”

So Friday at ASU’s Memorial Union, CAMP hosted its first-ever Migrant Family Conference, where junior and senior migrant high school students, along with their parents, spent the day at the university attending college-readiness workshops on topics like how to pay for college, admissions requirements and steps to being successful.

Alejandro Villalobos attended with his son Alex, a senior at Queen Creek High School interested in studying software engineering. The elder Villalobos came to the U.S. at the age of 5 and later worked as a member of the United Farm Workers of America. He never attended a four-year university himself, so he was appreciative of the information and resources the conference offered.

Rogelio Ruiz, student recruitment and family engagement coordinator at the School of Transborder Studies, said “It was important for us to involve the parents as well, because they play a significant role in their child’s education.”

It also presented another challenge: The conference would need to be language-accessible for those parents who speak only Spanish.

Ruiz and Szkupinski-Quiroga worked with Access ASU and other units to create Spanish-language flyers and messaging to help spread the word, and presentations on the day of the conference were given in Spanish.

Access ASU also helped train current CAMP Scholars to share their personal stories with the high school students via SPARKS, a student-led service organization whose members visit K-12 students throughout the Valley to inspire them to pursue and succeed in higher education.

“What SPARKS does is train student ambassadors to tell their stories; how they got to college, the challenges they faced, how they overcame those challenges,” said Lorenzo Chavez, director of student and community initiatives at Access ASU.

“We find that the most impact we have is when we connect students with ‘near-peers,’ or individuals with similar backgrounds who they can look up to. Especially high school students, where if it’s not quick and easy, sometimes it’s hard to keep them engaged.”

The migrant high school students who attended Friday’s conference left the university that day with not just inspirational stories but having made actual progress toward becoming an ASU student. Part of the day’s activities included beginning the process of filling out their FAFSA and ASU admissions forms.

Instead, they’re pursuing four-year degrees at the nation’s most innovative public research university.

Savilla said she hopes her son, a freshman at ASU, can be an inspiration to his younger brother, a junior in high school.

“Every time I bring him (Luis) here, I leave happy,” she said in Spanish. “Not sad because I am leaving him here — on the contrary, because I know my son will do great things here.”