What’s the best type of training for an academic professional who teaches in large classrooms and aspires to become a public intellectual? Athletics.

“I embrace situations that are challenging and force me out of my comfort zone,” said Victoria Jackson, a lecturer in the School of Historical, Philosophical and Religious Studies at Arizona State University. “I learned this from sport. Distance running is hard. Practice is hard. Competition is hard. You’re literally working that red line — pushing the boundary between excellence and failure — on a stage where people are watching, evaluating and judging you.” 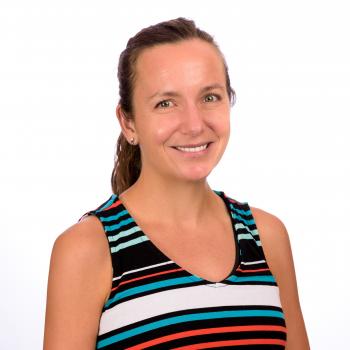 After completing her bachelor’s degree in history from the University of North Carolina at Chapel Hill, Jackson decided to pursue a graduate program at Arizona State University. She came to work with Regents’ Professor Emeritus Peter Iverson, whose research focused on Navajo history.

Jackson was also a student-athlete with two years of eligibility to compete on the Sun Devil Track and Field team with coach Louie Quintana. By her second year with the team, they completed the “trophy trifecta,” finishing in the top four at the 2006 NCAA National Championship in cross country and indoor/outdoor track and field.

“Individually, I earned a NCAA National Champion title in the 10,000 meters and signed a professional endorsement contract with Nike,” Jackson said. “I was partisan — ASU was a Nike school then.”

At the time, Jackson left the doctoral program with a master’s in passing, and plans to return to school. She competed for three years as a professional athlete on the national and international track and field and road racing circuits.

“My experiences as a professional athlete expanded my horizons,” Jackson said. “I began to conceptualize an opportunity I could create.”

In 2009, Jackson returned to the university to complete her doctoral training. She came with a vision to learn the field of sports history and build a curriculum she knew would appeal to undergraduate students. Under the mentorship of her advisor, Brooks Simpson, and Matthew Garcia, the former director of the School of Historical, Philosophical and Religious Studies. Jackson built out the school’s sports history curriculum as a relatively untapped rich research field.

“I wanted to keep that momentum going,” Jackson said. “I took advantage of the opportunity to become a lecturer when I completed my PhD, here at Arizona State University, in 2015.”

Jackson teaches courses on sports in the United States and the history of baseball, college sports, the Olympic movement and more. In 2016, she taught sports history to 922 students at ASU.

“I am in the business of blowing minds,” she said. “That’s what happens in a sports history class for the uninitiated. We take sports seriously and use it as a means to understand the people and societies of the past. Sports matter — socially, culturally, economically, politically — and we gain new knowledge when we take sport into consideration.

Jackson challenges students to think about the world in different ways, to embrace feeling uncomfortable, to question standard modes of thinking, to be bold and to take risks when formulating new ideas. She said she wants her students to leave her classes feeling inspired to learn more.

“The New American University is the perfect place to study spot because it requires interdisciplinarity, collaboration and innovation,” Jackson said. “And what subject has more to say about access, inclusivity and diversity than sport? In many ways, the study of sport falls in line with ASU’s mission.”

Currently, Jackson’s new research project investigates the past, present and future of American football and plays around with conceptions of American exceptionalism. She wants to uncover why Americans play football when the world plays soccer. She’ll also explore what ideas and meanings the sport holds for its creators, players and spectators — and how it demonstrates qualities that are uniquely American as the sport develops institutionally.

“I believe the best way to approach the future is with a strong foundation of knowledge of the past,” Jackson said. “Because sport, historically, has been at the frontlines of social change.”

In 2017–18, Jackson will partner with Sun Devil Athletics to tell ASU’s Title IX story. This research initiative will support a year-long celebration of women in sports and higher education.

“Something is always going on in the sports world that is much bigger than sport,” Jackson said. “We wake up every single day to news that demonstrates the importance of sport in society. It’s invigorating to the point of intoxicating.”

Arizona State University’s Herberger Institute for Design and the Arts has tapped ASU alum Erika Moore to help run one of the first programs of the Herberger Institute’s Projecting All Voices initiative, which aims to give underrepresented groups and first-generation students opportunities for design and arts careers and to explore issues of equality and inclusion in design and the arts.“As ...

Arizona State University’s Herberger Institute for Design and the Arts has tapped ASU alum Erika Moore to help run one of the first programs of the Herberger Institute’s Projecting All Voices initiative, which aims to give underrepresented groups and first-generation students opportunities for design and arts careers and to explore issues of equality and inclusion in design and the arts.

“As an artist of color, I recognize the lack of diversity in executive levels of leadership in art organizations across the nation and in higher education institutions,” Moore said. “We’re looking at institutional change — to be a place where all people, all artists, are included. Institutional change happens not only by including all artists in streams of support but also through the development and practice of equitable framework in those institutions.” 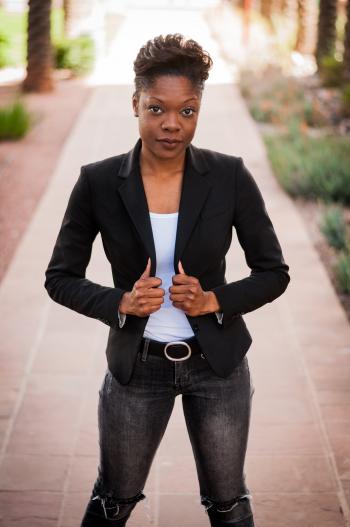 The Projecting All Voices initiative calls for the Herberger Institute to research, design, prototype, implement and disseminate a new system of programs for confronting field-level issues of equity and inclusion in both higher education and the arts. The Ensemble Lab, founded by Institute Professors Liz Lerman, Michael Rohd and Daniel Bernard Roumain, is helping to design the initiative for the Herberger Institute.

“Erika brings lived experience, great collaborative and managerial skills, and a strong point of view to her deep comprehension of working towards an equitable society,” Lerman said. “We are so lucky to have her and will be challenged to reach our aspirations by following her lead. Erika is also a wonderful choreographer, and her artistic practices will inform the way this very important initiative unfolds.”

Moore, originally from Los Angeles, trained at Debbie Allen Dance Academy. She earned both a bachelor's degree in nonprofit leadership and management and an master's degree in dance from ASU. While residing in Arizona she has danced with a variety of companies and produced “Movement Speaks,” which addresses the ban on ethnic studies in the state. In her new role, she will coordinate a program within the Projecting All Voices initiative funded by a $500,000 grant from the Mellon Foundation.

The grant will help establish a cohort of post-graduate fellows, made up of artists from diverse communities. Through the program the fellows will gain access to mentorship, opportunities to develop new work, exposure to key methodologies for expanding their capacities as artists, and opportunities to join conversations about power, race, class, cultural policy and reshaping education and cultural institutes to advance equity and inclusion. Current fellows are Yvonne Montoya, founding director of Safos Dance Theatre based in Tucson, Arizona; Alejandro Tey, a Chicago-based actor, director, writer and teaching artist; and Joel Thompson, a composer, pianist, conductor and educator from Atlanta.

Moore said the program also brings visiting artists to ASU for lectures, performances and workshops as well as to engage in community work with Projecting All Voices and its fellows. Musician, educator and author Ysaÿe M. Barnwell, longtime member of African-American female a cappella group Sweet Honey in the Rock, visited ASU for a weeklong residency with the ASU School of Music earlier this month as the first Projecting All Voices visiting artist.