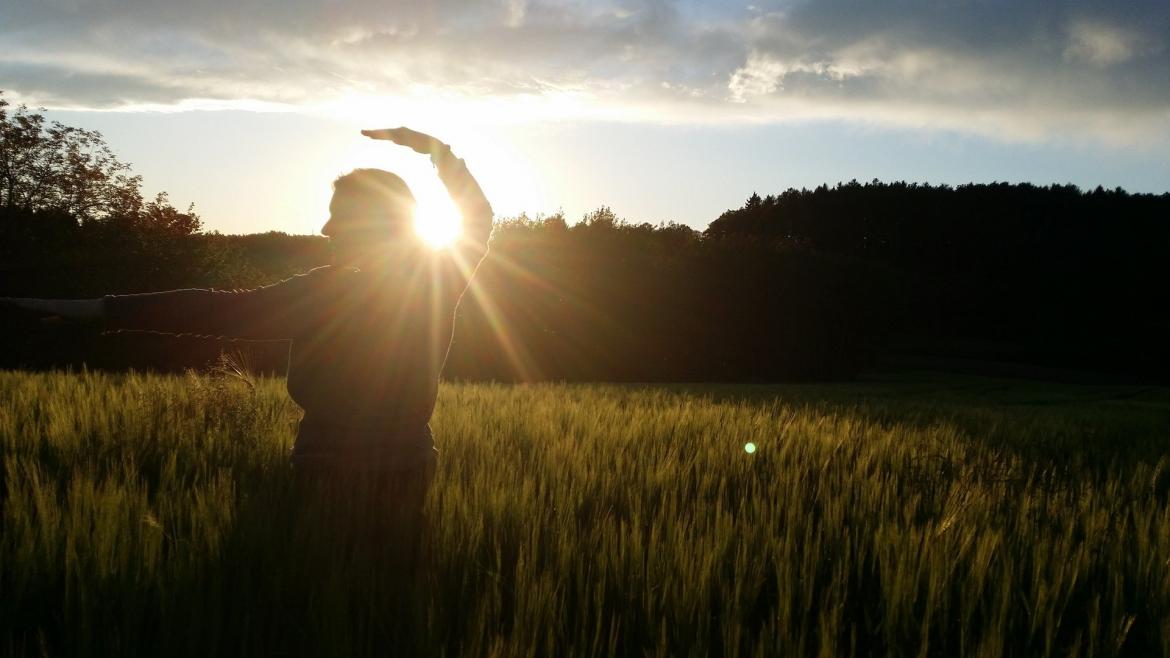 The American Cancer Society estimates that about 250,000 women in the United States will be diagnosed with breast cancer this year. They will join the approximately 3.1 million breast-cancer survivors who have completed treatment or are still undergoing it. Thanks to early detection and improved treatment options, the survival rate continues to increase year after year.

Breast-cancer survivors can experience symptoms long after their treatment has ended, such as fatigue, depression, weight gain, anxiety, cognitive dysfunction, pain and sleep disorders. Linda Larkey, a professor in Arizona State University's College of Nursing and Health Innovation, says practicing mindfulness activities such as qigong and tai chiQigong and tai chi are Chinese exercise systems that use slow, smooth body movements and controlled breath to achieve a state of relaxation in the body and mind.  can help to relieve these symptoms and contribute to a higher overall quality of life.

Question: What is mindfulness, and what benefits does it bring to those who practice it?

Answer: I have a two-fold definition for mindfulness. First, mindfulness is presence in the current moment and awareness of inner and outer environments. These environments occupy our thinking and fill up our senses. Focusing on the present moment has a way of taking one out of the chaos and skirmishes of daily ups and downs. It calls for us to stop, be quiet, take notice and be.

The second definition for mindfulness is only slightly broader than the first, and it incorporates awareness and movement of the body. This is an embodied form of mindfulness, often centered in the heart.

Mindful or meditative movement is particularly impactful for those with an active mind/being. Engagement of all the senses, the experience of movement in the context of being present in the moment, and the rhythm of the breath create an encompassing, powerful experience. 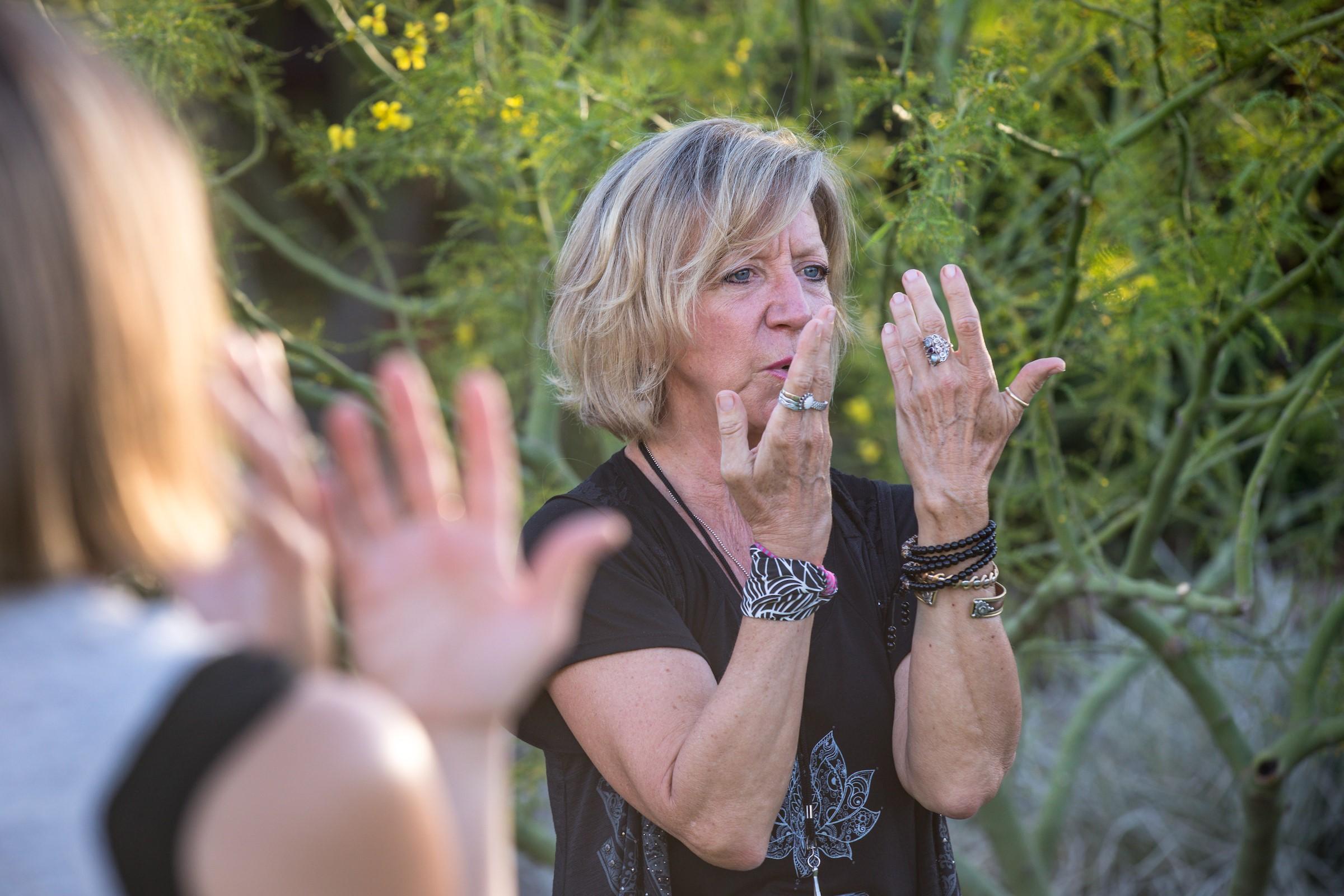 Linda Larkey, professor and certified Tai Chi Easy and qigong instructor, leads a group in the practice of tai chi at the Desert Botanical Garden. Photo by Charlie Leight/ASU Now

Q: How does meditative movement, including qigong and tai chi, help to alleviate the symptoms breast-cancer survivors experience post-treatment? What are the physical and psychological benefits of these activities?

A: The body’s usual responses to stress — an overactive mind, emotional distress, clenching of muscles, shortening the breath — all change in response to the practice of meditative movement. These changes allow the body to do what it does best, which is to make its own medicine, a natural result of calming the mind, deepening the breath and relaxing the muscles during gentle movement. During the practices of qigong and tai chi, the biochemicals that support health and immune function increase, while the biochemicals that produce inflammation, pain and depression/anxiety are lessened.

Some call it the “relaxation response,” but I think it is more than that. There are emotionally soothing, joy-building aspects to these practices that bring a lovely rhythm of the heart associated with healing the mind, body and relationships.

Q: Your research on meditative movement has shown that practicing these types of activities on a regular basis can improve a person’s mental and physical well-being. How are your findings impacting traditional health-care options for breast-cancer survivors? Are physicians incorporating mindfulness into their repertoire of treatment options?

A: My research is a mere drop in the bucket, but every study that demonstrates the physical and psychological benefits of dedicated mindfulness practice is another note in the many orchestrations of evidence that are getting the attention of physicians. Most cancer centers now have integrative medicine as part of their therapy — if they don’t, they are falling behind. Twenty years ago, meditative movement like yoga and tai chi were mostly sought out only by patients themselves in limited numbers and contexts. Now, referrals from health-care professionals to such practices is the norm rather than the exception.

Arizona PBS won six regional Emmy Awards, including one for a special on the legacy of Walter Cronkite as well as the top public service award, while Arizona State University students at the Walter Cronkite School of Journalism and Mass Communication dominated the intercollegiate contest.Arizona PBS won across a range of categories at the 40th annual Rocky Mountain Emmy Awards celebration, hosted ...

Arizona PBS won six regional Emmy Awards, including one for a special on the legacy of Walter Cronkite as well as the top public service award, while Arizona State University students at the Walter Cronkite School of Journalism and Mass Communication dominated the intercollegiate contest.

Arizona PBS won across a range of categories at the 40th annual Rocky Mountain Emmy Awards celebration, hosted Saturday evening by the Rocky Mountain Southwest Chapter of the National Academy of Television Arts and Sciences in Phoenix. The wins included the Governors’ Award as well as the induction of Ted Simons, the managing editor and host of “Arizona Horizon,” into the Silver Circle Society. 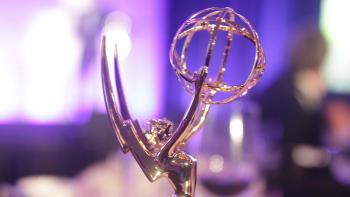 The Cronkite School, the home of Arizona PBS, dominated the Student Production Awards competition, winning seven out of 14 possible awards. Since 2009, the Cronkite School has won 42 student production awards, the most by any university.

“We are extremely proud of our strong showing across the board at the Rocky Mountain Emmys,” said Cronkite School Dean and Arizona PBS CEO Christopher Callahan. “It’s a testament to the dedication and hard work of our talented staff at Arizona PBS and outstanding students at the Cronkite School.”

The Walter Cronkite special, which aired on Arizona PBS, included video from a 2016 Cronkite School event in Washington, D.C., that featured some of the nation’s top journalists, including Scott Pelley, Bob Schieffer and Lesley Stahl of CBS News as well as the late Gwen Ifill of the “PBS NewsHour.”

In the Student Production Awards, graduate student Adriana De Alba won three awards, the most by any student in the competition. She won in General Assignment and Arts and Entertainment/Cultural Affairs as well as in Long Form: Fiction/Non-Fiction for a documentary on bees with fellow students Allison Bailey, Sierra Theobald and Brianna Davis.

“It was an exciting moment for me, my family and faculty at Cronkite,” De Alba said. “It took a year of hard work to get to this point. It was great to work with such an amazing team for our documentary. The award was equally earned by all of us.”

During the event, Arizona PBS also accepted the Governors’ Award, the highest honor given by the NATAS Rocky Mountain Southwest Chapter, in recognition for the public service efforts of Arizona PBS Educational Outreach, which specializes in supporting educators and students in the classroom and families at home with PBS educational content focused on national, common core and state standards. The honor was announced in August.

Also during the event, Simons, the managing editor and host of “Arizona Horizon,” was inducted into the Silver Circle Society of the NATAS Rocky Mountain Southwest Chapter, an achievement reserved for media veterans in the southwest who have shown exemplary service in the industry for more than 25 years.

Since 2007, Simons has moderated discussions with government officials, business leaders and policy makers about the issues, laws and policies that affect Arizonans in their everyday lives on “Arizona Horizon.” Prior to joining Arizona PBS, Simons hosted the afternoon drive news/talk show on KTAR radio, worked as news director/morning show host for KZON-FM and news/sports anchor/reporter at KPHO-TV. Simons was also sports director/anchor at KOFY-TV in San Francisco.

“What a special award,” Simons said. “It’s so nice to be recognized for doing something that I absolutely love to do. And while it’s a little sobering to know that so many years have passed, it’s exciting to think about where we are at Arizona Horizon and where we’re headed. It’s been — and continues to be — a great ride.”

NATAS is a professional service organization dedicated to the advancement of the arts and sciences of television and the promotion of creative leadership for artistic, educational and technical achievements within the television industry. The Rocky Mountain Southwest Chapter represents Arizona, New Mexico, Utah and El Centro, California.