A new NASA study, with support from an Arizona State University atmospheric scientist, provides space-based evidence that Earth’s tropical regions were the cause of the largest annual increases in atmospheric carbon dioxide concentration seen in at least 2,000 years.

Scientists suspected the 2015–16 El Niño, one of the largest on record, was responsible. But exactly how has been a subject of ongoing research. Analyzing the first 32 months of data from NASA’s Orbiting Carbon Observatory-2 (OCO-2) satellite, researchers conclude that impacts of El Niño-related heat and drought occurring in tropical regions of South America, Africa and Indonesia were responsible for the record spike in global carbon dioxide. While each of these regions responded differently, all added to the increase. 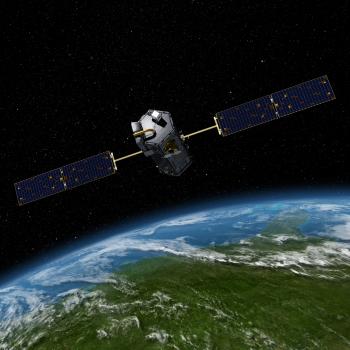 The journal Science is publishing the findings beginning Oct. 13 as part of a collection of five research papers based on this data.

“These three tropical regions released 2.5 gigatons [a gigaton is 1 billion tons] more carbon into the atmosphere than they did in 2011,” said Junjie Liu, lead author of the study and researcher at NASA’s Jet Propulsion Laboratory (JPL). “Our analysis shows this extra carbon dioxide explains the difference in atmospheric carbon dioxide growth rates between 2011 and the peak years of 2015-16. OCO-2 data allowed us to quantify how the net exchange of carbon between land and atmosphere in individual regions is affected during El Niño years.”

They found that the total amount of carbon released into the atmosphere from all land areas increased by 3 gigatons in 2015 due to the El Niño, which is a reoccurring warming of water in the Pacific Ocean. About 80 percent of that amount — or 2.5 gigatons — came from natural processes occurring in tropical forests in South America, Africa and Indonesia, with each region contributing roughly the same amount.

“These important results are a testament to NASA leadership in integrating data from our group and others with state-of-the-art modeling to answer critical questions about our climate future,” said Gurney, an atmospheric scientist and ecologist with the ASU School of Life Sciences.

Gurney, an expert in carbon cycling science, provided one of the core datasets to the simulations reflected in the article. In addition, he assisted with analysis of the study’s results. Also a senior sustainability scientist with the Julie Ann Wrigley Global Institute of Sustainability, he added: “The results of this study reflect another potential accelerant to climate change.”

The team compared the 2015 findings to those from a reference year (2011), using carbon dioxide data from the Japan Aerospace Exploration Agency’s Greenhouse Gases Observing Satellite. In 2011, weather in the three tropical regions was normal and the amount of carbon absorbed and released by them was in balance.

In 2015 and 2016, the OCO-2 satellite recorded atmospheric carbon dioxide increases that were 50 percent larger than the average increase seen in years preceding these observations. These measurements are consistent with those made by the National Oceanic and Atmospheric Administration. That increase was about 3 parts per million per year (or 6.3 gigatons of carbon).

In recent years, the average annual increase has been closer to 2 parts per million of carbon dioxide per year — or 4 gigatons of carbon. These record increases occurred even though emissions from human activities in the 2015–16 are estimated to have remained roughly the same as before El Niño.

OCO-2, a NASA satellite launched in 2014, gathers global measurements of atmospheric carbon dioxide with the resolution, precision and coverage needed to understand how this important greenhouse gas — the principal human-produced driver of climate change — moves through the Earth’s system at regional scales, and how it changes over time.

From its vantage point in space, this satellite can make roughly 100,000 measurements of atmospheric carbon dioxide each day, around the world.

The last El Niño affected the amount of CO2 that Earth’s tropical regions released into the atmosphere.
Image by NASA/JPL-Caltech 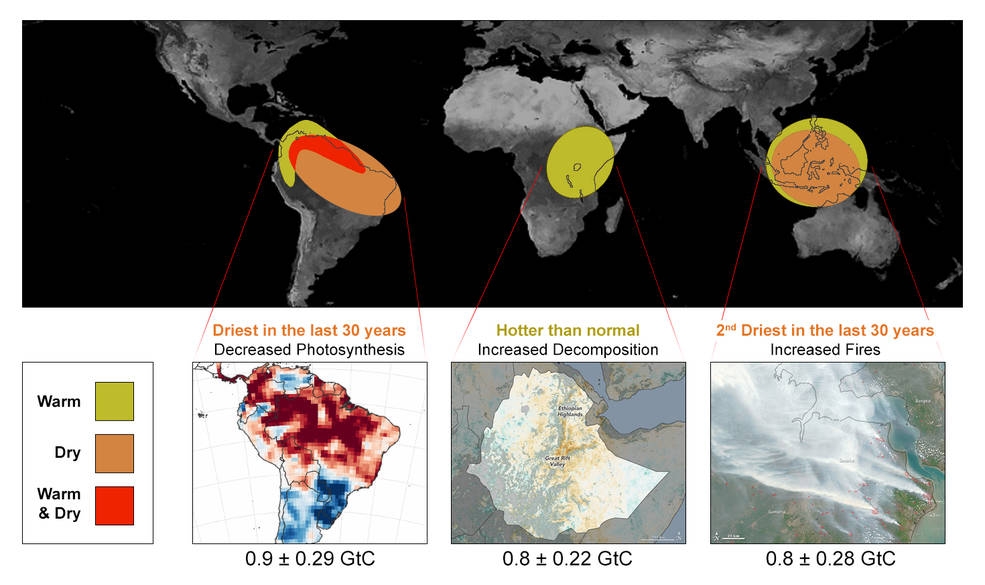 The effects were different in each region.

“Understanding how the carbon cycle in these regions responded to El Niño will enable scientists to improve carbon cycle models, which should lead to improved predictions of how our planet may respond to similar conditions in the future,” said OCO-2 Deputy Project Scientist Annmarie Eldering of JPL. “The team’s findings imply that if future climate brings more or longer droughts, as the last El Niño did, more carbon dioxide may remain in the atmosphere, leading to a tendency to further warm Earth."

The research team also concluded that if future climate becomes more like the climate during El Niño, Earth may lose the carbon-removal services of its tropical forests.

All of Arizona State University celebrates when its students win prestigious awards.The journey to those prominent scholarships and fellowships is long, requiring years of work and reflection, and ASU provides an enormous amount of help along the way. The Lorraine W. Frank Office of National Scholarship Advisement works with students as young as freshmen, providing information sessions, writing he... 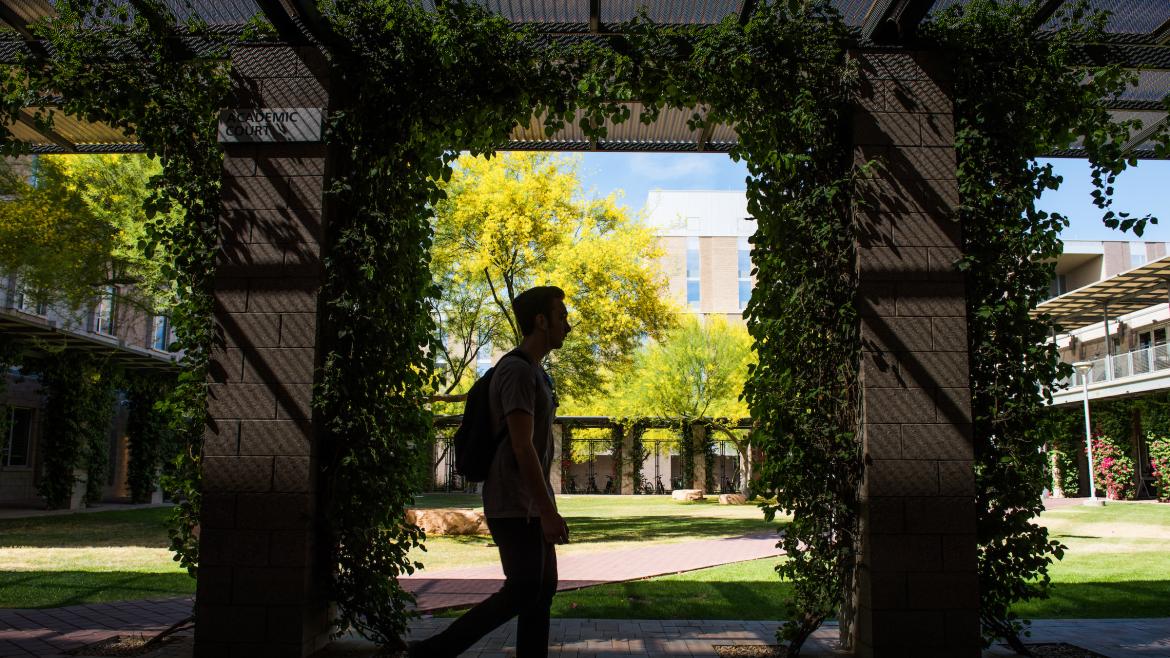 All of Arizona State University celebrates when its students win prestigious awards.

The journey to those prominent scholarships and fellowships is long, requiring years of work and reflection, and ASU provides an enormous amount of help along the way. The Lorraine W. Frank Office of National Scholarship Advisement works with students as young as freshmen, providing information sessions, writing help and practice interviews.

All of that sounds like practical assistance, but guiding these accomplished people as they refine their goals and reflect on their talents can be life-changing in ways that will help the world.

Frank Smith III, who’s majoring in political science, is applying for the Rhodes, Marshall and Schwarzman scholarships this fall. The process has altered his path. 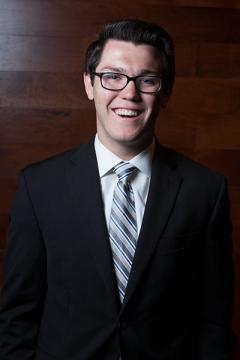 “I’ve done a lot of foster-care reform work. I’ve helped to get bills passed in the state legislature and I’ve gone to the White House,” said Smith, who was in foster care as a child and took a semester off last year to work on Hillary Clinton’s presidential campaign.

“At first I thought that’s what I wanted to do. And yes, I’ll always be an advocate for foster reform. But working on these applications has helped me tie my previous work into a much larger goal of closing the opportunity gap, providing equal opportunity to all.”

Smith, who hopes to get a master’s in public policy, took some time after the campaign and traveled in Europe, then did a study-abroad program in Ghana over the summer.

“The more I’ve gone abroad the more I see that you can’t just look at public-policy issues through the lens of a single nation or single point of view — you need to see it from that global vantage point,” he said.

Bren Ram had a vague idea of wanting to work in the world of academia after acquiring a doctorate, but the Marshall Scholarship application has created a new vision.

“It’s now solid that teaching is the thing I want to do with my life,” Ram said. “I’m passionate about education, research and writing. 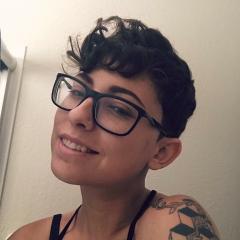 “This process helped me to learn that what I enjoy doing is working with students, and I always want to do that.”

ASU has been raising its profile with elite awards. In March, ASU became one of only four institutions to have winners of the three

Erin Schulte, who earned a degree in global studies, was the 18th ASU student win a Marshall Scholarship. Ngoni Mugwisi (at left in the photo), who earned a degree in electrical engineering, is ASU’s first Rhodes Scholar since 2001. Christopher Balzer, a chemical engineering graduate, was ASU’s first Churchill Scholar. All three are currently studying in England. most prestigious international scholarships – Marshall, Rhodes and, for the first time at ASU, a Churchill Scholar. And ASU has become a top producer of Fulbright winners, with 15 students currently abroad in the U.S. government’s flagship exchange program.

In addition, 19 Sun Devils won a prestigious GilmanThe nationwide Gilman scholarship funds international travel for students who might not otherwise consider study abroad — such as first-generation college students, those with disabilities and underrepresented ethnic and demographic groups. scholarship to study abroad this past summer — the most ever for ASU.

These awards are highly competitive but within reach of many students, according to Kyle Mox, director of the Lorraine W. Frank Office of National Scholarships Advisement at ASU and associate dean of Barrett, the Honors College. He has seen ASU’s students, especially at Barrett, arriving with higher academic ability and more ambition.

“They’re well aware of where they are and what the values are. They feel empowered,” he said. “They made a choice to come to ASU and to benefit from that choice.”

Mox is the president of the National Association of Fellowship Advisers, so he has a good perspective on the national landscape. Many universities have small offices, with a part-time faculty member doing the work. ASU has three full-time and two part-time staffers in its office, housed in Barrett, the Honors College. Besides recruiting students from across the university, including non-Barrett students from all campuses, the office also helps applicants work with faculty to get good letters of recommendation and offers workshops showing examples of successful and unsuccessful application packages.

Most deadlines are in the fall, so the scholarship office ramps up in the spring with information sessions and workshops.

Simply choosing among the many options is another way the office helps, Mox said.

“A lot of students come in and say, ‘What am I eligible for?’ And it could be dozens of awards,” he said, each with varying requirements.

But many have a rigorous application process and students get a lot of help with that.

“My original rough draft for my personal statement for the Marshall was about 700 words over the limit. It was rambling. It was incoherent. It was me talking about my life story and all these things I was interested in,” said Ram, who is majoring in philosophy and creative writing.

But Mox helped Ram whittle away and shape the narrative.

“So I was able to look back on my life and goals and interests with an eye toward how they made me who I am rather than a series of disconnected events,” Ram said. “Even if I don’t get the scholarship, the process of the personal statement has helped me learn about myself in a personal way.” 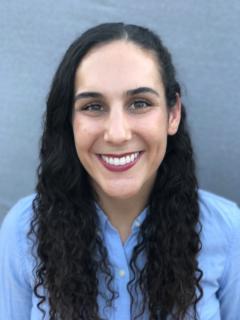 That process can be long, as Cara Popeski found out when she applied for the Marshall and previous scholarships.

“I sent Dr. Mox dozens of drafts of my essays, and I mean dozens,” said Popeski, who said the work is helping as she also applies to medical school. Popeski graduated in May with a degree in psychology and hopes to have a career in behavioral health.

Applicants also get prepped for interviews. Some are practice sessions, but many top awards require the university to endorse or nominate students and that means an interview with ASU staff and faculty. Smith, who won a Truman ScholarshipSmith was awarded the Truman Scholarship for 2015 for his work getting the state legislature to pass a bill that creates a college tuition waiver for former foster children. Then-Gov. Jan Brewer signed the bill in 2013. two years ago, said his interview at ASU was more difficult than with the Truman panel.

“It was the most intense interview of my life,” he said.

“It was confrontational — anything is on the table. And it made me better. It made me think more meticulously about what I say and where I can steer the conversation.”

Ram is actively involved with the forensic debate team and is a confident speaker. But the ASU interview was tough.

“I thought I bombed it. It went well enough that ASU decided to endorse me, but I learned a lot,” Ram said.

“I always think that I can just wing, it but it opened my eyes that I have to be ready.”