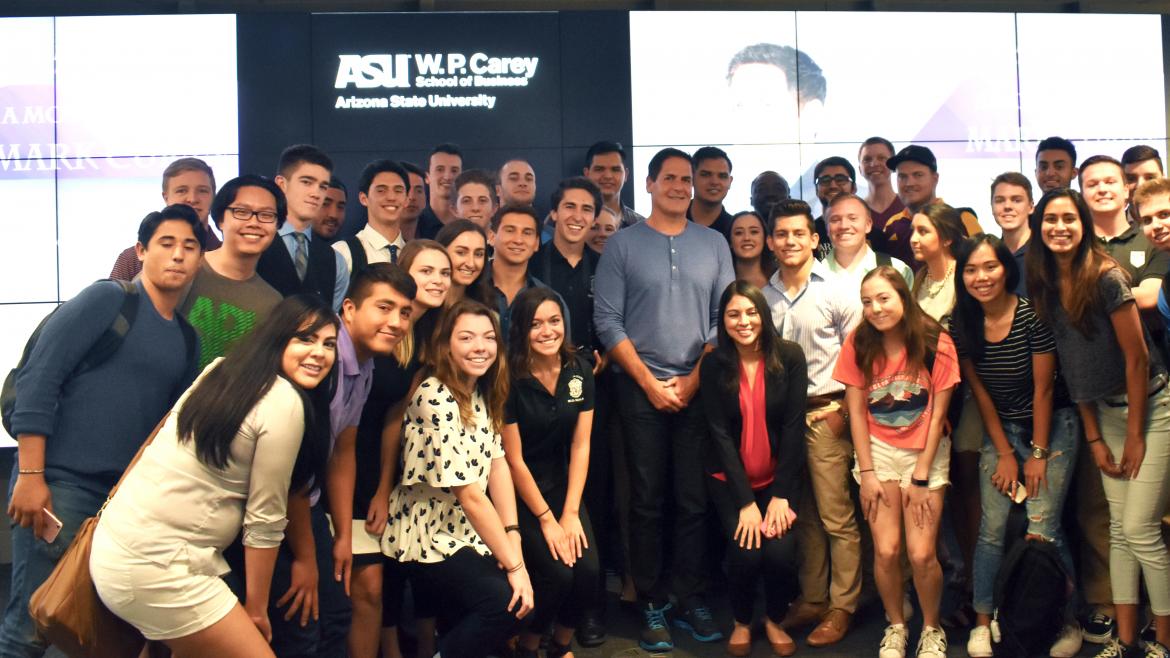 Entrepreneur Mark Cuban tells ASU students: ‘Aspire to be you’

Many ASU students with big dreams aspire to be like a successful leader or to follow in the footsteps of a famous person.

Billionaire entrepreneur Mark Cuban wants them to aspire to be themselves.

“This is your chance to be excited.”

Cuban, who visited Arizona State University at the invitation of the Delta Sigma Pi business fraternity (of which he was a member at his alma mater, Indiana University), told students he wasn’t sure what direction his career would go, but he knew he wanted to be in business.

“One of the advantages I’ve always had is I understand the language of business,” he said. “When people spoke about accounting, I understood it ... I understood marketing, I understood sales, I could walk into any company and know what was going on when they spoke to me about what they were trying to accomplish.”

Cuban, who briefly owned a bar after graduating college and has started many companies since then, encouraged his audience to be entrepreneurial and said the most important person in an enterprise is most often the founder.

“There is nobody more responsible for the sales in the company than the entrepreneur who started it,” he said. “You can’t be dependent on somebody else.”

And he praised the commitment of the students who joined the business fraternity not only for their dedication to their studies, but for absorbing all that they can outside the classroom as well.

“By being part of Delta Sigma Pi, being part of business school, learning about business — not just in classes, but outside of class as well with things like this and things you consume and read on your own — that’s how you give yourself a leg up.” 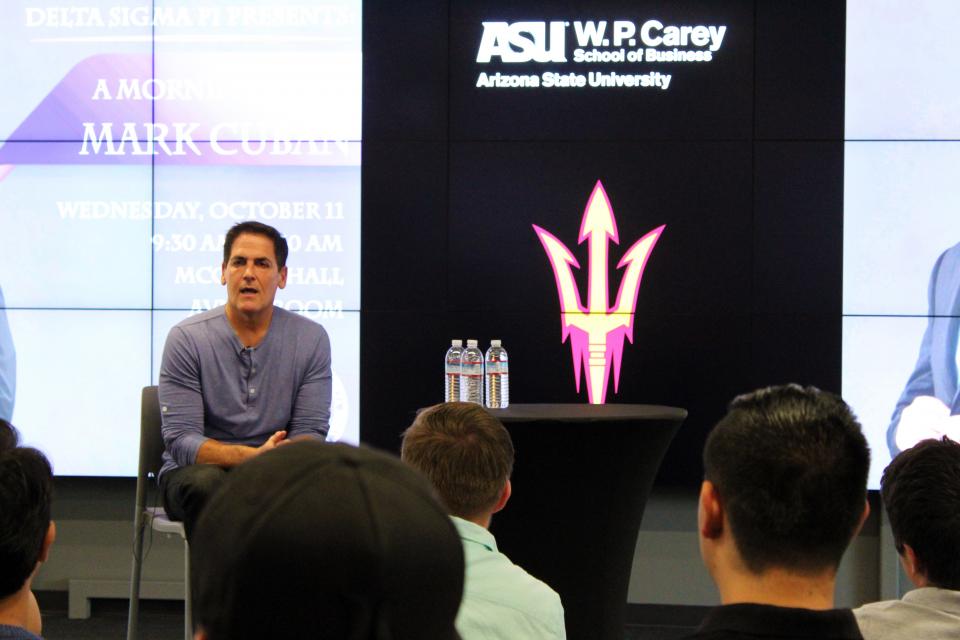 Besides being an American businessman, investor and TV personality, Cuban authored the book, “How to Win at the Sport of Business, “because business is the ultimate sport” he said.

Cuban’s appearance at ASU came about rather abruptly.

W. P. Carey School of Business student and Delta Sigma Pi member Michael Voeller said the event came together at the last minute and the fraternity only had about 30 hours to pull it all together.

“To have two days to rally, invite 150 people and secure an ideal venue was a lot of pressure,” Voeller said. “We had a lot of help from other members in the fraternity to market this event and reach out to as many people as we could.”

For his part, Cuban said he didn’t intend to give a big speech at ASU — he just wanted to have a conversation and offer advice, because business can mean something different to each person in the room, and business can help people with widely different goals.

“… Anyone who is trying to solve a problem is an entrepreneur.”

The AriZoni Theatre Awards of Excellence, Arizona's awards for outstanding theater, recognized Arizona State University's excellence in theatrical productions and individual performances during its 27th annual awards ceremony Sept. 25 at the Tempe Center for the Arts.ASU’s School of Music Lyric Opera Theatre took home seven awards for its 2016–2017 production of “The Magic Flute,” which re...

The AriZoni Theatre Awards of Excellence, Arizona's awards for outstanding theater, recognized Arizona State University's excellence in theatrical productions and individual performances during its 27th annual awards ceremony Sept. 25 at the Tempe Center for the Arts.

ASU’s School of Music Lyric Opera Theatre took home seven awards for its 2016–2017 production of “The Magic Flute,” which received nominations in all 13 musical categories and won the award for best overall musical production. 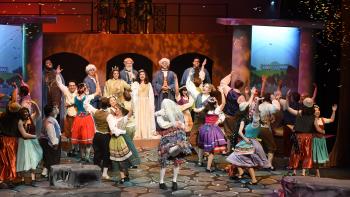 “The greatest strength of our opera and musical theatre program at ASU is the students,” DeMaris said. ​“It is so easy and wonderful to work with such impressive young talent. Not only the cast members on stage, but also the orchestra students are among the best I've worked with at any institution.”

He said many of the students, singers and instrumentalists already have lots of professional experience in Phoenix and beyond, which provides the unique opportunity for everyone to work at a professional level while still helping to train and elevate students in their skills.

“The Magic Flute” received the most nominations of any Lyric Opera Theatre production for the 2016–2017 season.

“I think the opera plays to our strengths, which are that we have a lot of superbly trained vocalists who are also terrific actors and have experience in both opera and musical theater, as ‘The Magic Flute’ is a piece that even in 1791 was a true ‘theater’ piece, not a full grand opera,” DeMaris said.

He said involving cross-disciplinary elements in the design, overseen by Alfredo Escarcega, technical director senior for Lyric Opera Theatre, is something that helped the production resonate in the 21st century.

DeMaris said Dale Dreyfoos' stage direction balanced the worlds of fantasy-comedy and serious drama regarding the ideals of the Enlightenment and a particularly strong cast were heroic in putting the time in to this unusually long and difficult opera.

Faculty, students and alumni of ASU’s Lyric Opera Theatre program received 20 nominations in all award categories and seven of those nominees received awards.

“I think this speaks to the strength of our program as a whole as well as the growth we've been working toward in our technical production process,” DeMaris said. “Our faculty and staff team in the department has been excellent in trying new things, and the students have been terrific in sharing ideas as well as working hard to help ensure that all we do is at the highest level. We have an abundance of talented students, faculty and staff, and people with ideas, energy, drive and a passion to really make our program better each day.”

DeMaris said the audience has returned in full after several years of poor ticket sales and he is excited about the future of the theater’s program.

“We had multiple sold out performances of every single production last year, which is very exciting,” he said. “People know that what's going on here is excellent and they want to be a part of it.”