Politics, elections and governance in the United States are largely viewed through the lens of a two-party power structure of Republicans and Democrats. However, a distinct but ill-defined group of voters is quietly becoming a force that no longer can be ignored. Independent voters are increasingly determining winners and losers in election contests throughout the country and the number of Americans who call themselves independents is on the rise. However, little is known about the America’s independent voters.

The Morrison Institute for Public Policy at Arizona State University and the Schwarzenegger Institute for State and Global Policy have teamed up with one another and Independentvoting.org to examine the independent voter phenomenon and the impact that it is having on the American political landscape. Their findings have been outlined in the briefing paper "Gamechangers?: Independent Voters May Rewrite the Political Playbook," released Oct. 5. 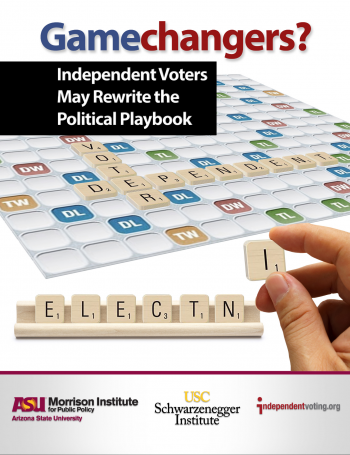 “The rising number of voters in the United States who are registering and identifying as “independent” is a very important phenomenon and is already impacting local, state and national elections,” said former California Governor Arnold Schwarzenegger. “Understanding who these voters are and what they care about is essential to a strong democracy, and I am proud to have my Institute involved with this study.”

Joseph Garcia, a lead author of the report, director of communication and community impact, and director of the Latino Public Policy Center at Morrison Institute added: "This paper provides an important foundation for a better understanding of independent voters, as well as the underreported undercurrent of independent sentiment in a traditionally viewed political world that is still very much controlled by the two major parties. That long-held duo control is becoming more tenuous, however, as more voters disassociate themselves with polarizing partisanship and constricting party lines by joining the independent movement — either by action, name or both."

"Like Einstein's theory of relativity or Galileo's insistence that the earth revolves around the sun, new ways of seeing the dynamics of our world can be gamechanging," Salit said. "In our work with USC’s Schwarzenegger Institute and ASU's Morrison Institute, we're showing the world new ways of seeing the independent voter. This will have a dramatic impact on the politics of our country."

Copies of the reports can be downloaded here.

Arizona State University celebrated the grand opening of the Student Pavilion Thursday night, the newest — and greenest — building on the Tempe campus. The pavilion is the first net zero energy building at ASU, meaning it uses no more energy than it creates.The new building now houses the Undergraduate Student Government (USG), Council of Coalitions, and the Programming and Activities Board, a... 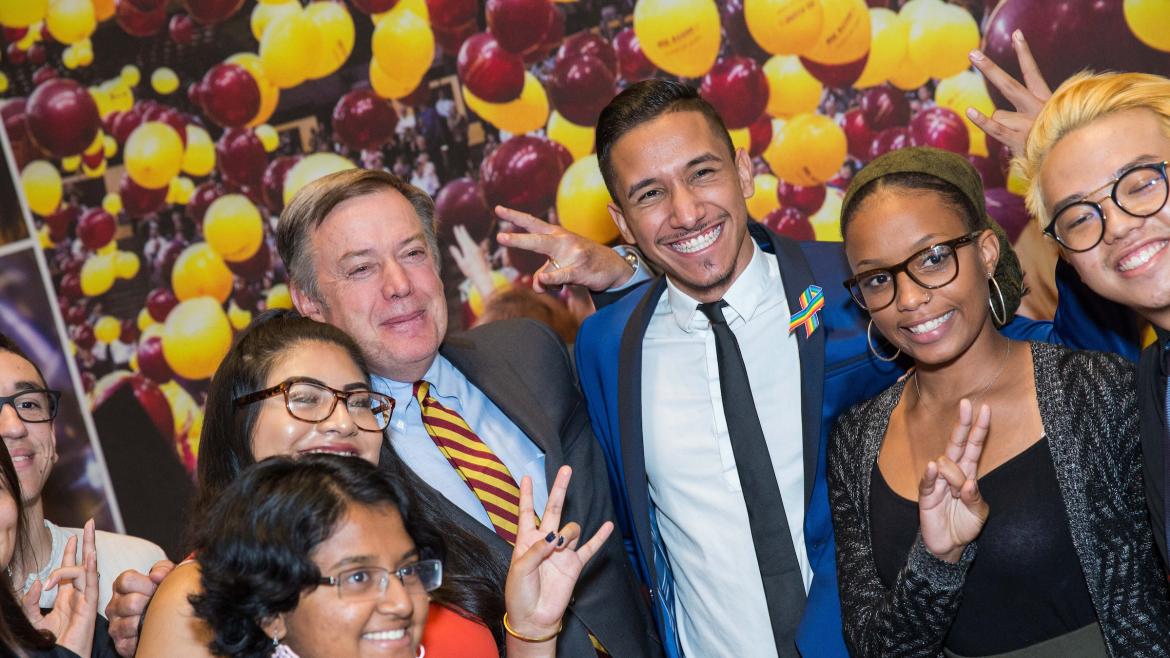 Arizona State University celebrated the grand opening of the Student Pavilion Thursday night, the newest — and greenest — building on the Tempe campus. The pavilion is the first net zero energy building at ASU, meaning it uses no more energy than it creates.

The new building now houses the Undergraduate Student Government (USG), Council of Coalitions, and the Programming and Activities Board, and its sustainable practices have inspired the organizations to incorporate “green” practices in their own events.

“It’s really given us this awesome challenge of figuring out ‘How can we be sustainable at all of our events?’ and really think about the environment as we’re doing them,” said Kavitha Ramohalli, president of the Programming and Activities Board on the Tempe campus.

In addition, a ceremonial ribbon cutting took place, along with the announcement of the burial of a time capsule, to be opened in August 2067, 50 years after the building's opening. Visitors fill the entrance of the new ASU Student Pavilion during the grand opening Oct. 5 on the Tempe campus. 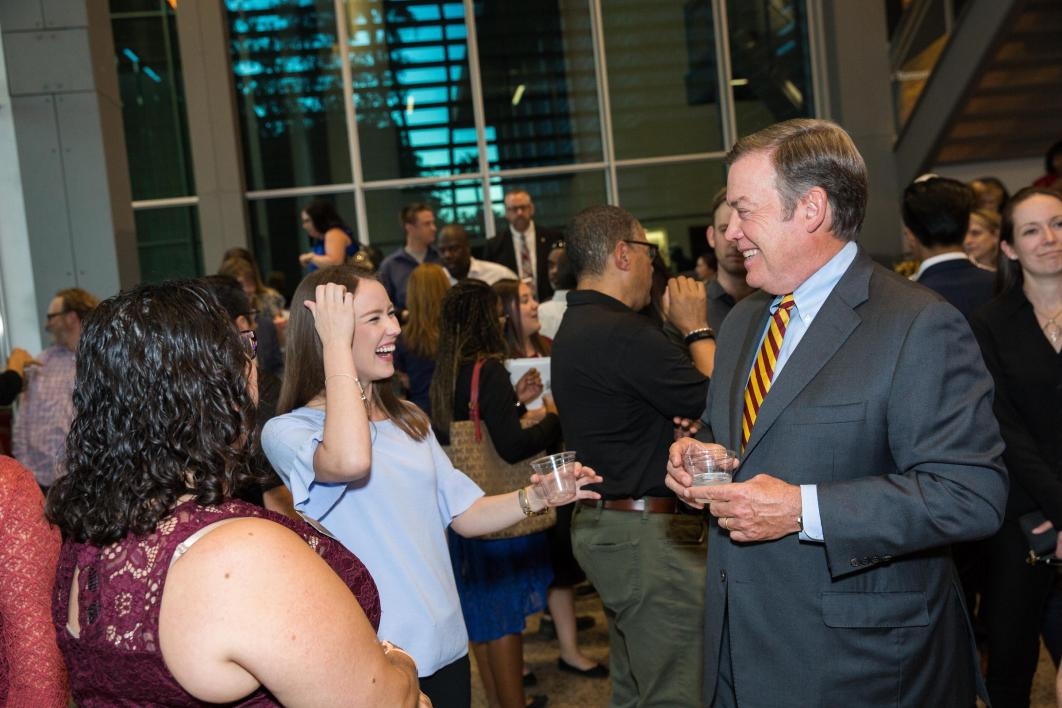 Aundrea DeGravina (center), student regent and a psychology and political science senior, speaks with ASU President Michael Crow during the grand opening of the Student Pavilion. 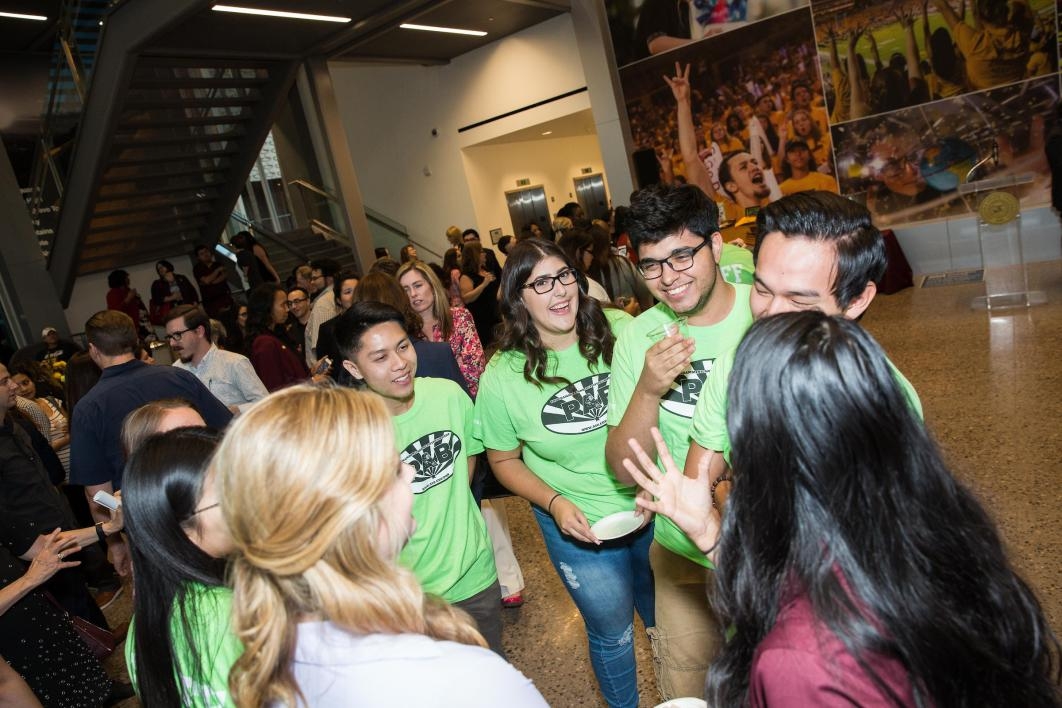 Programming and Activities Board students fill the entrance of the Student Pavilion during the grand opening. 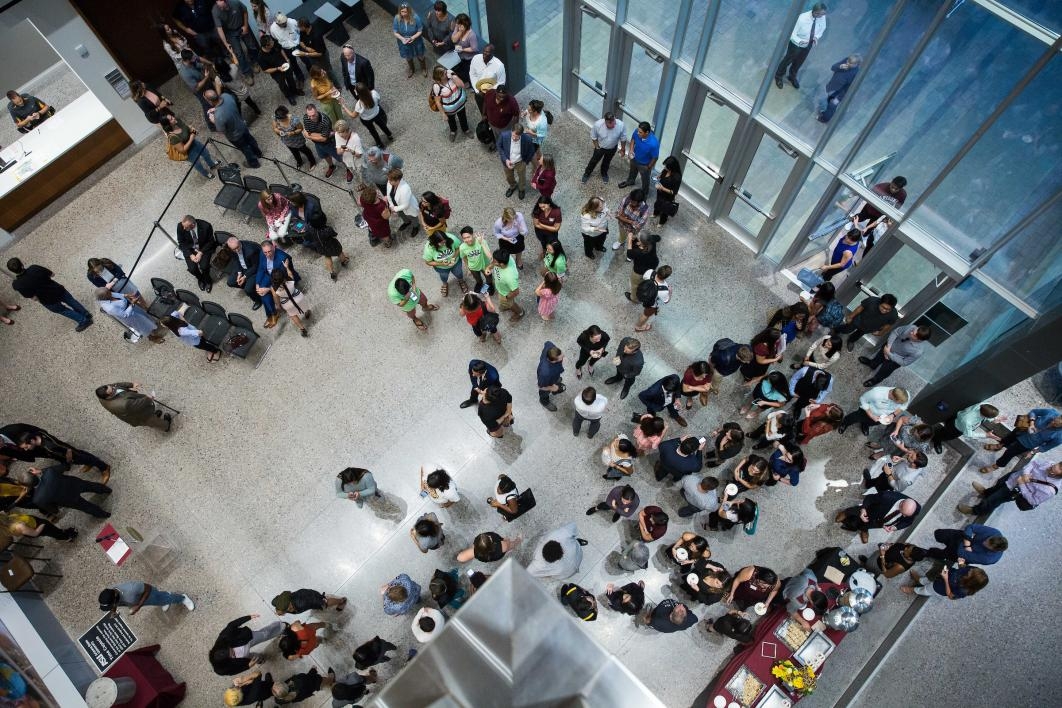 Visitors fill the entrance of the new ASU Student Pavilion during the grand opening on Tempe campus. 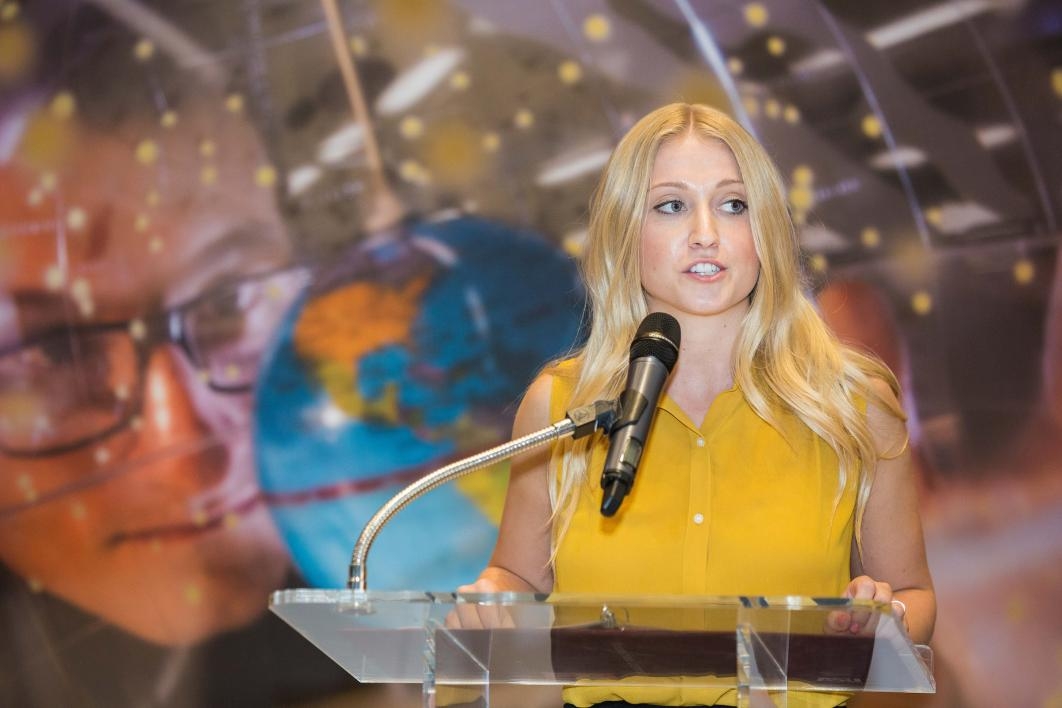 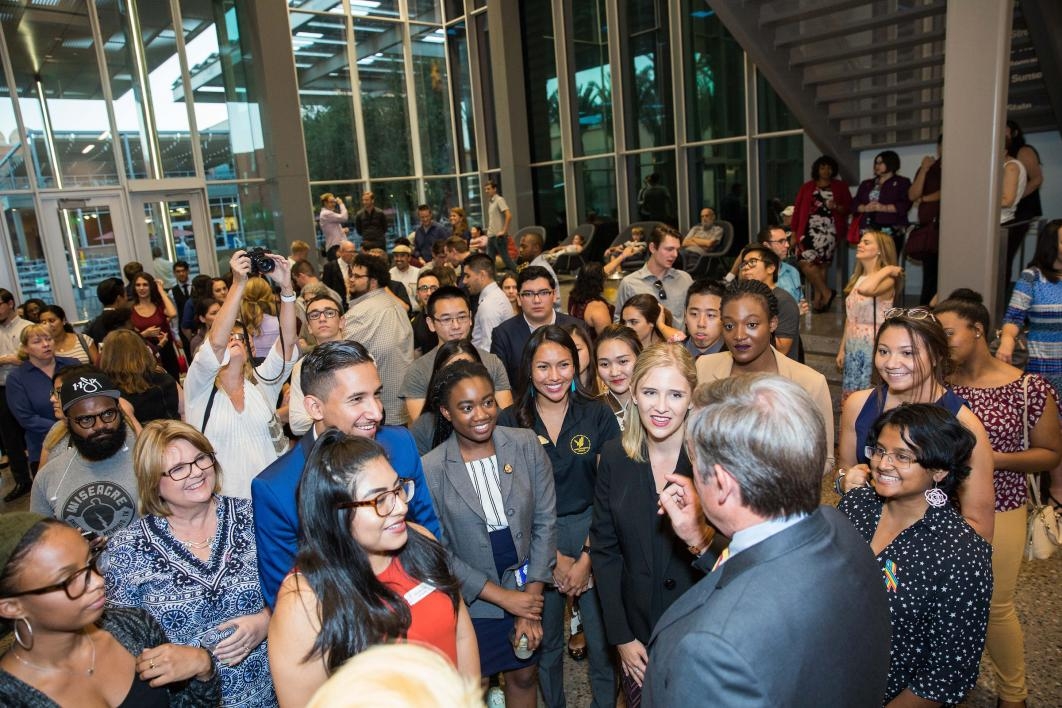 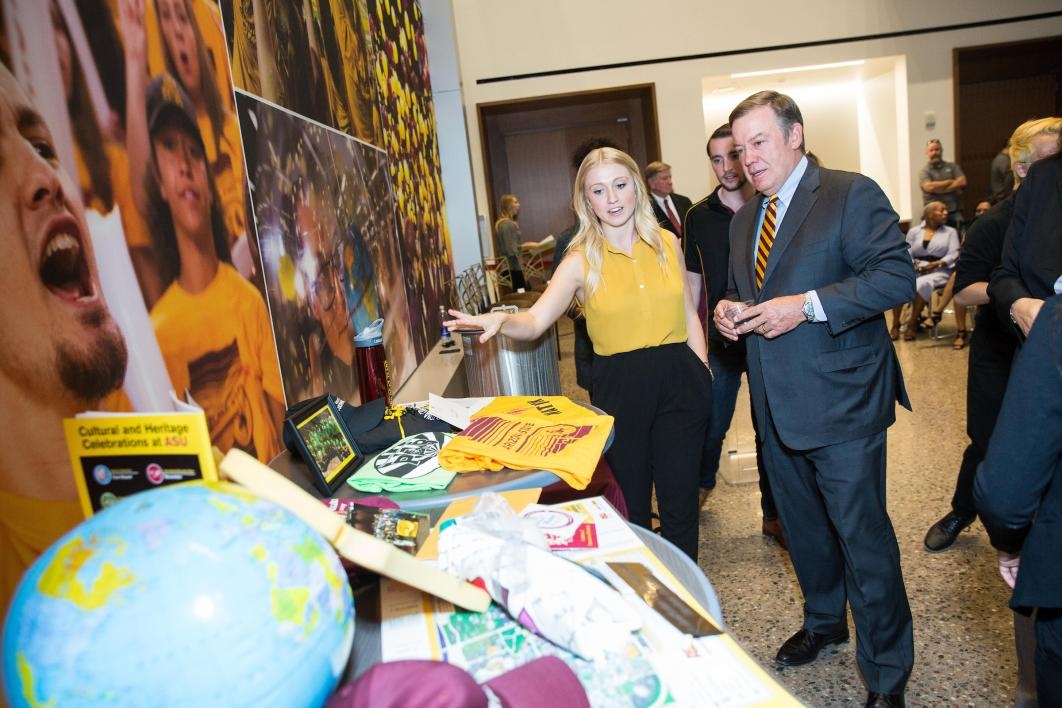 Undergraduate Student Government President Brittany Benedict shows ASU President Michael Crow the items that will be placed in a time capsule, during the grand opening of the Student Pavilion. 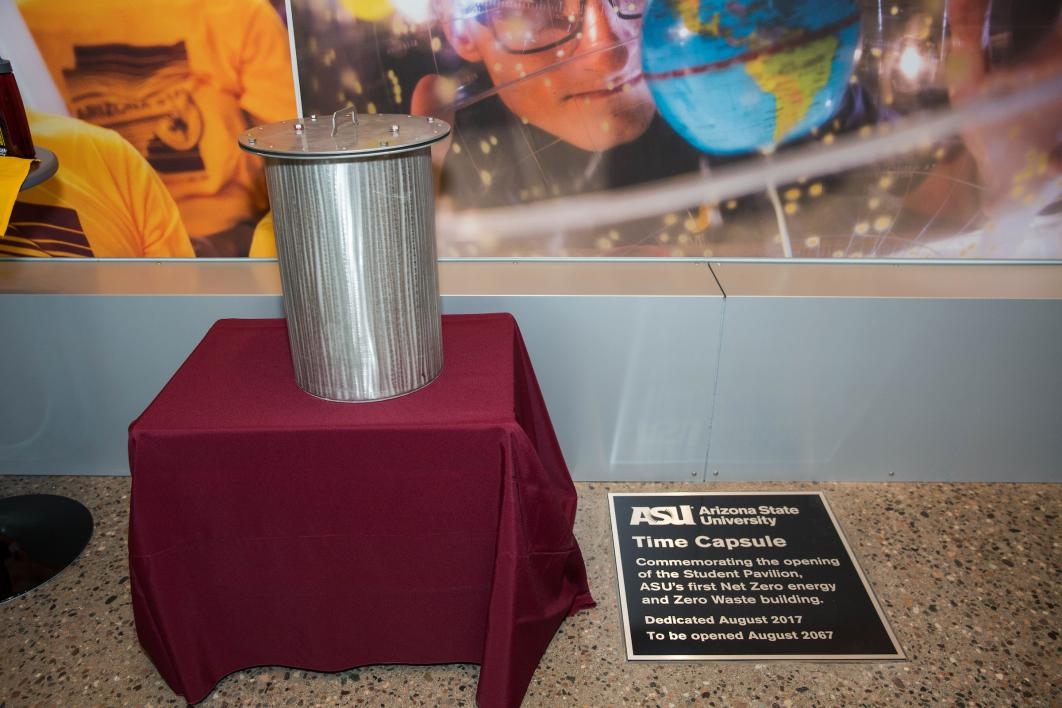 The time capsule that will be kept for fifty years in the new ASU Student Pavilion and opened in August 2067. 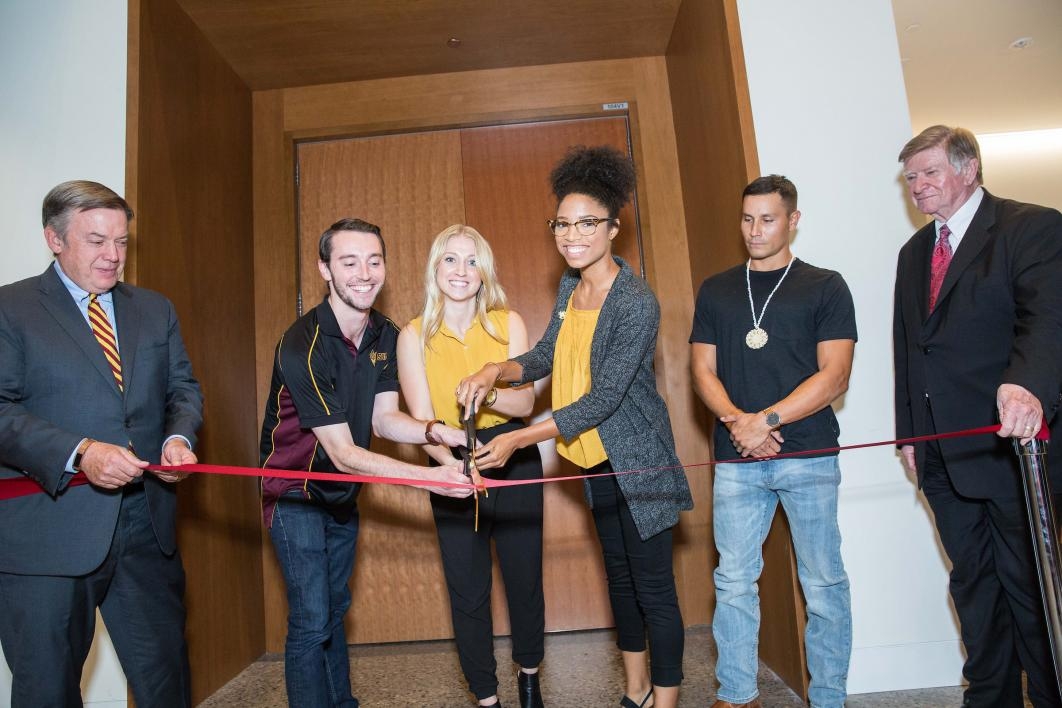 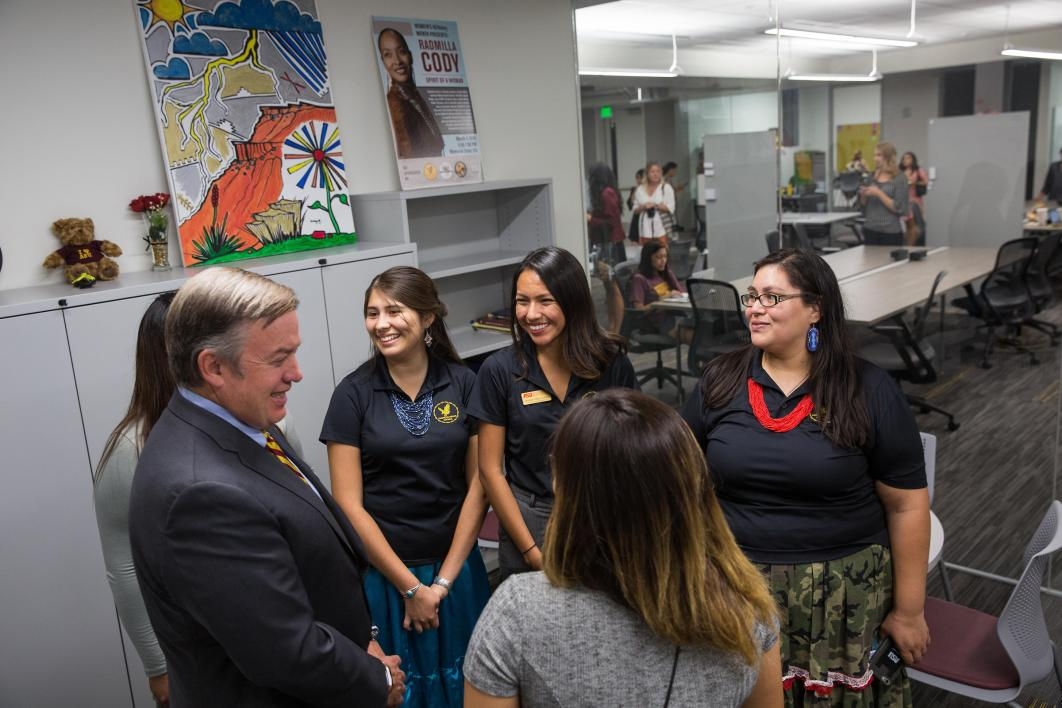 ASU President Michael Crow speaks with students from the American Indian Council during the grand opening of the Student Pavilion.