A message to faculty and staff about athletics compliance

As a member of the National Collegiate Athletic Association and the Pac-12 Conference, ASU is committed to the principle of athletics compliance and the concept that our student-athletes and athletics stakeholders play by the rules, both on and off the playing field.

ASU's Athletics Compliance Office has created a video to provide information regarding the rules that are most likely to apply to you and your interactions with ASU student-athletes and prospects. Download Full Image

The rules governing intercollegiate athletics are institutional in nature, and, therefore, relate to the manner in which all ASU faculty and staff members interact with Sun Devil student-athletes and prospective student-athletes.

On behalf of Sun Devil Athletics, ASU's Athletics Compliance Office created a tip sheet and one-and-a-half minute video to provide information regarding the rules that are most likely to apply to you and your interactions with ASU student-athletes and prospects.

Please review the materials and, if you have any questions about them or anything else relating to athletics compliance, do not hesitate to contact the Compliance Office at 480-965-5760.

Though this story contains the words “Russia” and “hack," an Arizona State University student team's recent trip to Moscow had nothing to do with elections or cybersecurity. Rather, it was the students doing the hacking — bringing home first-place finishes in an international hackathon.The competition, dubbed VisionHack, was the first computer vision for autonomous vehicles hackathon and t...

Though this story contains the words “Russia” and “hack," an Arizona State University student team's recent trip to Moscow had nothing to do with elections or cybersecurity. Rather, it was the students doing the hacking — bringing home first-place finishes in an international hackathon.

The competition, dubbed VisionHack, was the first computer vision for autonomous vehicles hackathon and tasked 27 teams from around the globe with creating an intellectual subsystem for driver assistance, capable of detecting obstacles and other challenges on the road. 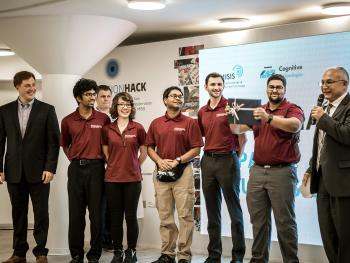 ASU’s solution impressed judges, earning first place for Best Presentation, Most Original Approach and, fittingly, Most Innovative. Dismantling the competition like a stack of Russian nesting dolls, the ASU team finished ahead of the other finalists, which emerged from a field of 242. The hackathon ran Sept. 11–13 at Moscow’s National University of Science and Technology, known as NUST MISIS. The event was organized by the university in partnership with Russian software company Cognitive Technologies.

Team solutions were scored on six obstacles they were charged with teaching the computer to identify: a bridge, a tunnel, windshield wipers, crosswalks, speed bumps and road signs denoting city exits and entrances.

The key to ASU’s approach was prioritization, according to Mian, who served as the student team lead due to his experience with international competitions previously.

“We had six different types of obstacles to account for, so we looked at the problem overall and tried to determine which obstacles, if any, would overlap,” Mian said. “We then prioritized the challenges based on what we thought was most critical — that being the crosswalk.”

Schoepf, who recently earned his doctorate in chemical engineering from ASU, is no stranger to pitching and presentations. Not only did he co-found the startup SafeSIPP, but he has mentored more than 200 EPICS teams and participated in many of ASU’s entrepreneurship and venture development programs. While faculty members weren’t permitted to help with the technical challenges, they could aid in presentation preparation, which is where Schoepf lent his expertise.

“Jared really helped us consolidate our story and find that thread throughout,” Mian said. “I’m not sure many faculty members could’ve helped us as much as he did, whether it was helping us polish our presentation, motivating us to work or just making sure we took a break and ate every so often.”

As well as presenting to a panel of judges — where the ASU team picked up its first-place finishes — there was a purely technical scoring round as well. The team placed fifteenth overall, but first out of the U.S. universities — soundly defeating MIT and Wisconsin — and completed the challenge first. In addition, they submitted only four of the six criteria for judging in this round.

“We were risk-averse,” Mian said. “We determined we potentially stood to lose more than gain on those two criteria, so erred on the side of caution and opted out.”

The cultural and lingual barriers of the competition were particularly challenging, according to the team. The Russia-centric competition’s provided materials introduced a whole system of unfamiliar traffic laws, signs and patterns. No one on the team spoke or read Russian, let alone had an understanding of the Cyrillic alphabet.

Despite being at a disadvantage, the team worked tirelessly through the three-day event, never leaving the enormous hall where all the teams worked. They took shifts sleeping in bean-bag chairs while other teams returned to their hotels, and their constant presence earned them the nickname “Camp ASU,” according to D’Souza.

Though the competition was fierce, getting to know students from other competing universities was a highlight for the entire team.

“I really enjoyed talking to other teams — I learned some things about materials science from the Cambridge team, and about statistics from the Harbin team,” D’Souza said.

In addition to the competition, the team had time for sightseeing and presented at the Moscow Maker Faire, which ran Sept. 9–10. The team set up a human-machine interface demonstration, which D’Souza put together, drawing on his experience working in Professor Subbarao Kambhampati’s lab. The demo displayed the ease of human-machine interaction both online and in person.

The team noted how welcoming and helpful their hosts were. The host university provided cultural presentations and technical lectures from sponsoring companies following the hackathon, as well as student volunteers to serve as guides and translators, taking visitors around the city.

“I really enjoyed exploring different museums around Moscow,” D’Souza said. “It was interesting to see history from another perspective, especially that of the Space Race. I learned some interesting things about that period, such as how the Russians were the first to launch space stations and successfully complete a soft satellite landing on the moon.”

Schoepf was equally enamored with the experience and plans to return.

“It was my first time in Moscow, but it definitely won’t be my last,” Schoepf said. “We had a fantastic experience learning about the Russian culture, the engineering programs at the university and interacting with the students and faculty from the other universities.” 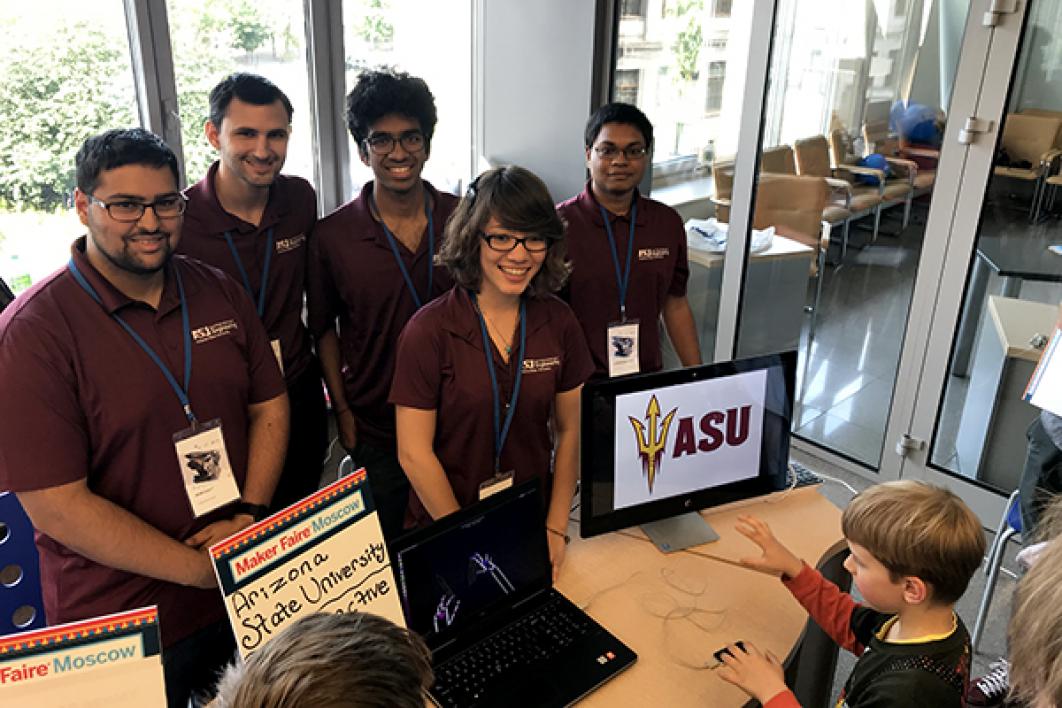 A guest at the Moscow Maker Faire interacts with the ASU team's human-machine interface demo. 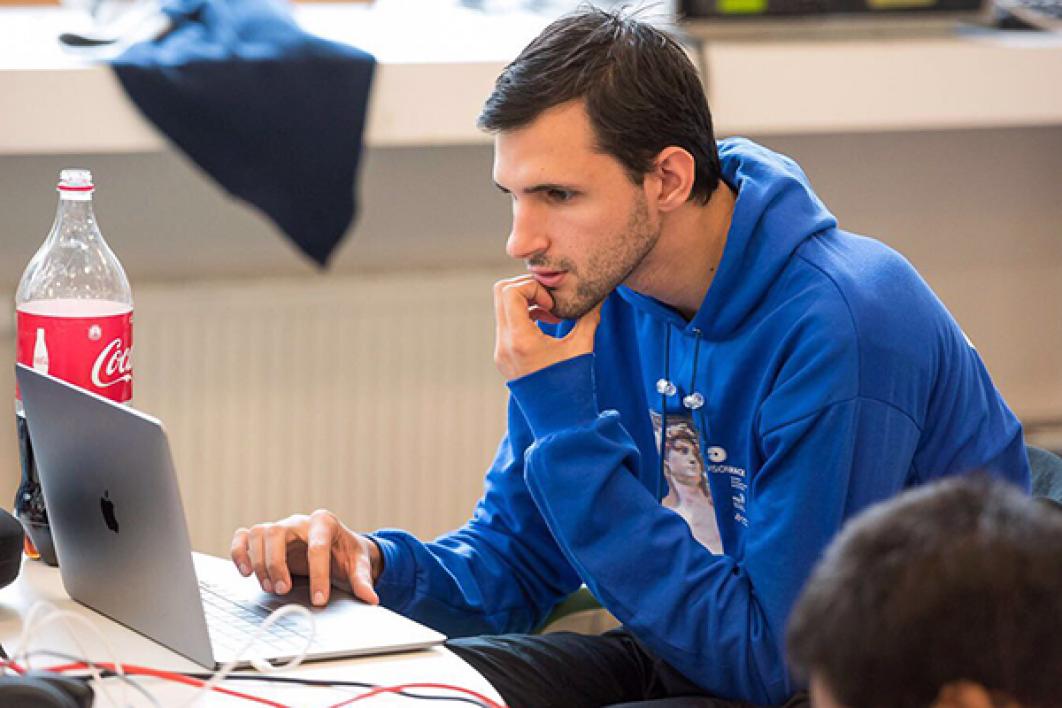 Software engineering graduate student Alexander Lampis Slaughter works on the computer vision challenge during the 2017 VisionHack, held in Moscow on Sept. 11–13. The hackathon tasked teams with teaching a computer to recognize various obstacles and traffic occurrences for use in autonomous vehicles. 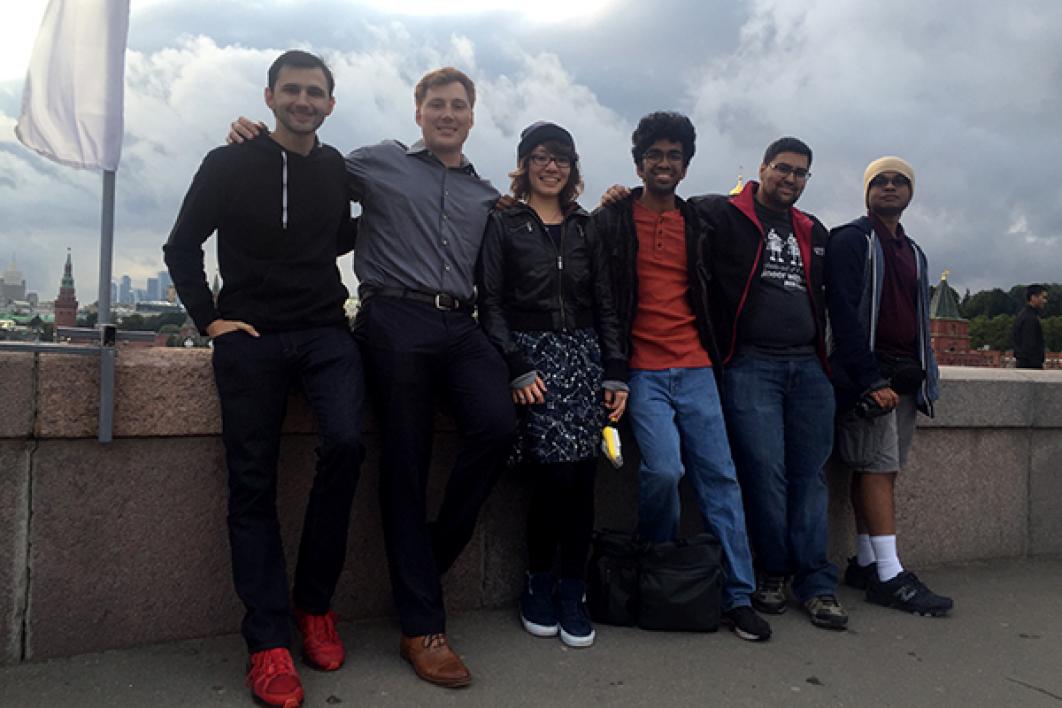 The ASU VisionHack team pauses for a group photo while out sightseeing in Moscow.