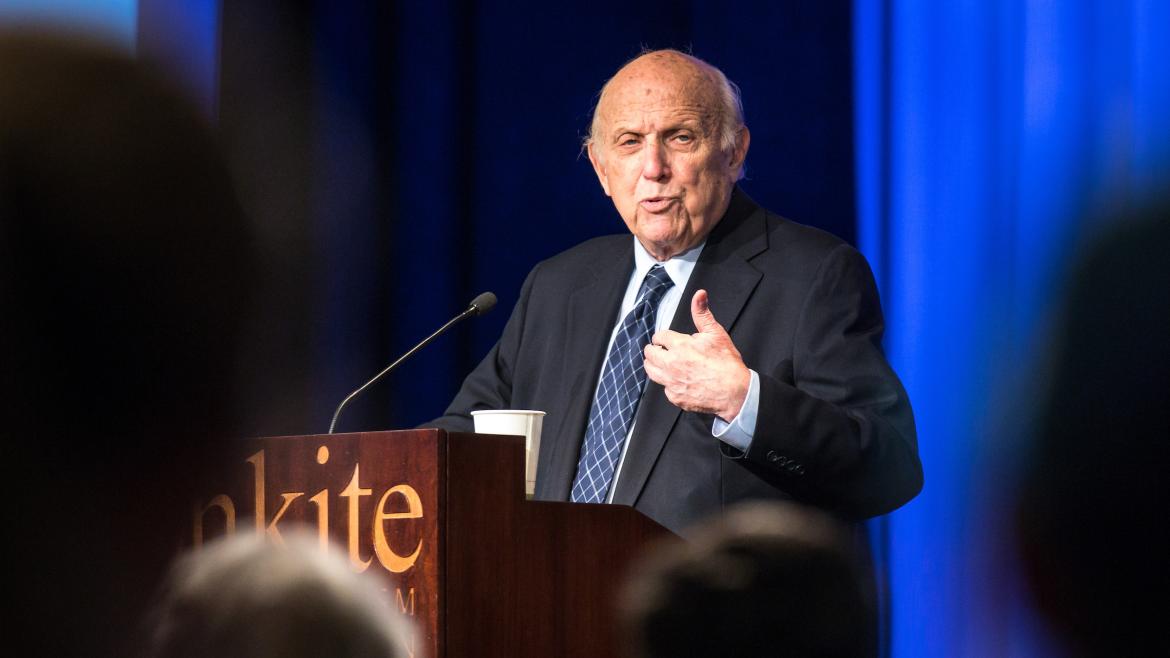 Free speech, one of the most basic rights guaranteed to U.S. citizens, has become a hot-button issue with phrases like “fake news” and “safe space” entering the national lexicon, and arguments raging over what is and is not acceptable conversation for the public square.

Lawyer and author Floyd Abrams — who over the course of a career spanning more than half a century has argued and won many significant Supreme Court First Amendment cases that protected freedom of speech, including the Pentagon Papers case — took the stage Tuesday night to speak on why now, more than ever, free speech must be protected.

“It’s worth thinking about why we protect some speech,” Abrams said, alluding to what many have viewed to be intolerant rhetoric in recent weeks and months. He cited former Supreme Court Associate Justice Hugo Black, who said, “The very reason for the First Amendment is to make the people of this country free to think, speak, write and worship as they wish, not as the government commands.”

The fact that the speech of some may make others uncomfortable is the price Americans pay for the protection of their own speech.

Abrams' talk at the Arizona PBS Studios on ASU’s Downtown Phoenix campus kicked off the 2017–18 lecture series “Free Speech and Intellectual Diversity in Higher Education and American Society,” a series created by the recently launched School of Civic and Economic Thought and Leadership (SCETL) in hopes of encouraging a more productive dialogue in an increasingly heated arena.

In the last year on college campuses, conflicting views about what exactly is protected by the First Amendment have resulted in schisms ranging from fierce debates to outright violence, as was the case when two students were carted off, bloodied and in handcuffs, after coming to blows over alt-right white nationalist Richard Spencer’s visit to Auburn University.

But, said ASU Professor and SCETL Founding Director Paul Carrese, allowing for argument and civil dialogue between parties who disagree is “what universities are all about.”

“This year’s (lecture series) theme rose out of an immediate question facing universities and colleges about speakers on campus sparking protests and even violence, and being disinvited or shutting down the campus,” Carrese said.

“The larger issue is, what is a university or college’s mission? … We thought our mission was not to provide a specific answer but that the School of Civic and Economic Thought and Leadership could be a national space to have the debate about that.”

At Tuesday night’s event — co-sponsored by the Walter Cronkite School of Journalism and Mass Communication and the Sandra Day O'Connor College of Law — Abrams was introduced by Associate Professor of Journalism Joseph Russomanno, who said there may be no one else who has worked so hard to uphold the First Amendment as Abrams.

After being welcomed to the stage, Abrams expressed his pleasure at being the first to speak in such “a series of lectures at time when the country desperately needs to be thinking about free speech and intellectual diversity.”

He then recounted with dismay recent testimony he gave to the Senate Judiciary Committee in which he found it “almost too easy” to list a number of recent incidents involving the misinterpretation or suppression of free speech on college campuses.

In regards to a lawsuit filed just last week against Michigan State University for refusing to provide a space for Spencer to speak, Abrams said, “His views I consider to be ugly in nature, and I am not at all alone in thinking that.”

However, free speech protects even potentially incendiary speakers invited to speak on campuses.

“Discrimination on the basis of message and content cannot be tolerated under the First Amendment,” he said. “That being so, speech must be permitted and campuses must take adequate precautions to prevent violence.” 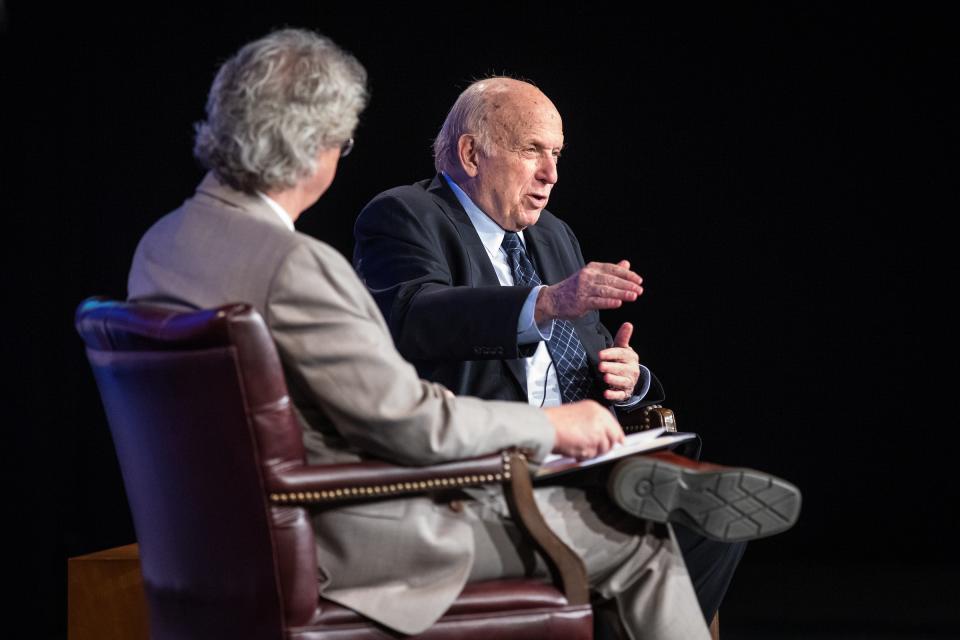 Abrams’ encouragement of the audience to consider the rationale behind free-speech laws echoes SCETL’s goal to involve and educate the university and community at large about civil discourse and fundamental American values and principles.

According to Carrese, if universities lead the way on free speech and the serious, responsible and open exchange of ideas on campus, they can set an example of what it means to be an educated, active citizen for the community beyond the campus.

SCETL is working with ASU’s Mary Lou Fulton Teachers College and Great Hearts Academies in Phoenix to develop a master’s degree focused on classical, liberal education. The school also recently facilitated the acquisition of a first printing of the Federalist Papers, of which only 500 exist. There are plans to collaborate with ASU Gammage on a public exhibition of the document when the Broadway production of “Hamilton” comes to Tempe this winter. (Alexander Hamilton was one of three writers of the Federalist papers. His co-writers were John Jay and James Madison.)

The lecture series and other upcoming panels and events hosted by SCETL — all free and open to the public — are being filmed by Arizona PBS, which will use the content to produce a four-part series that will air next year. The content will also be made into a book, separately.

Next up in the lecture series is a debate between former U.S. Senators Jon Kyl (R-AZ) and Tom Daschle (D-SD), titled “Disagreement and Civil Dialogue on American Politics and Civic Culture.” It is scheduled for 5 p.m. Oct. 12 at the Katzin Concert Hall on the Tempe campus.

“[They have] agreed to share the stage and have a dialogue about why it’s important to keep discussing and arguing with people who hold divergent views from your own,” Carrese said. “That’s what universities are all about.”

Top photo: First Amendment attorney Floyd Abrams, who represented The New York Times in the landmark Pentagon Papers Supreme Court case, discusses free speech on campus before 200 people at the Walter Cronkite School of Journalism and Mass Communication on Tuesday. The talk is part in the "Free Speech and Intellectual Diversity in Higher Education and American Society" lecture series, sponsored by the School of Civic and Economic Thought and Leadership, the Cronkite School and the Sandra Day O'Connor College of Law. Photo by Charlie Leight/ASU Now

Three alumni from the School of Music in the ASU Herberger Institute for Design and the Arts were featured presenters at the quadrennial conference of the International Congress of Voice Teachers (ICVT).The theme for the 2017 ICVT conference, which was held Aug. 2–6 in Stockholm, Sweden, was “Tradition and Science in Harmony.”Kevin Hanrahan, who received a DMA in vocal performance in 2005, ...

Three alumni from the School of Music in the ASU Herberger Institute for Design and the Arts were featured presenters at the quadrennial conference of the International Congress of Voice Teachers (ICVT).

The theme for the 2017 ICVT conference, which was held Aug. 2–6 in Stockholm, Sweden, was “Tradition and Science in Harmony.” 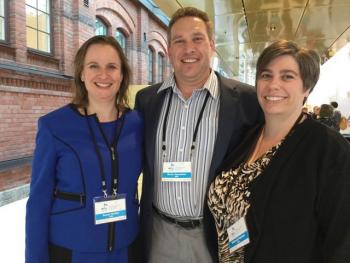 ICVT is an organization of voice teachers, voice scientists and voice researchers from around the world. It meets for five days of sessions, master classes and performances every four years. The conference in Sweden, attended by 400 delegates from around the world, was ICVT’s ninth since its inception in 1987.

Herberger Institute for Design and the Arts School of Music Faculty