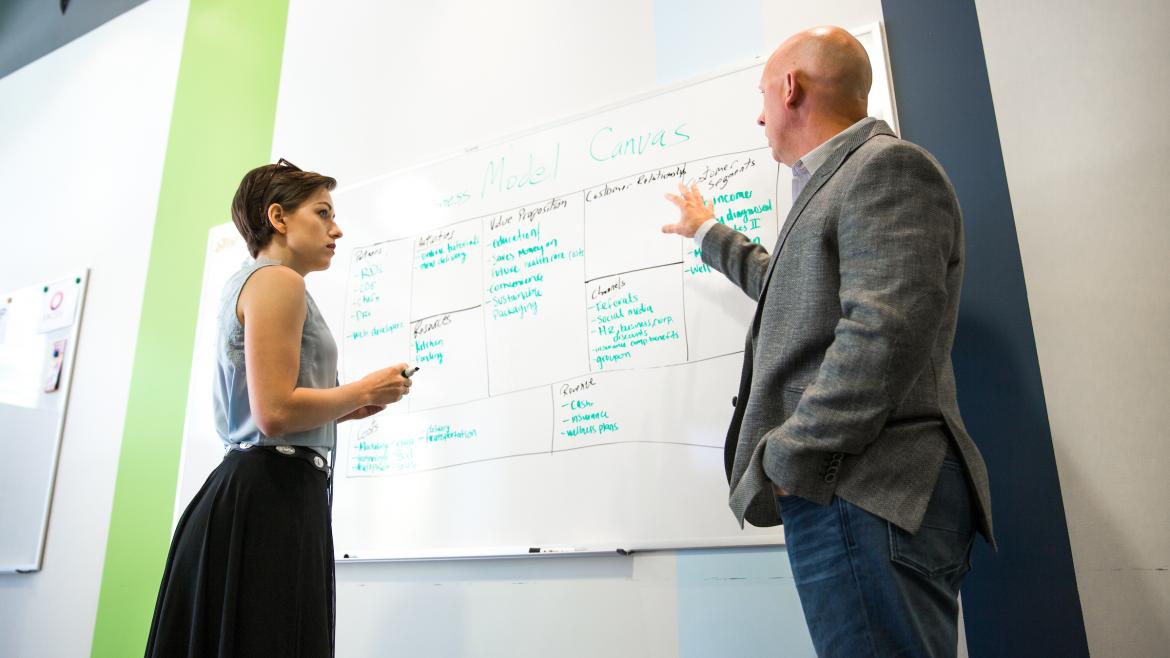 Arizona State University has a reputation for innovation, so it’s no surprise that its schools are brimming with resources to support entrepreneurial and solutions-based endeavors.

But when it came to budding health-care professionals, there was a gap. Healthcare Innovation Program Director and Clinical Professor Rick Hall filled that gap Wednesday with the soft launch of HEALabHEALab stands for Health Entrepreneurship Accelerator Lab. on ASU’s Downtown Phoenix campusHEALab occupies the same space as Taylor Place Kitchen, on the south side of Taylor Place..

Hall pitched the idea of a health- and wellness-centric entrepreneurship lab six months ago to leaders at the College of Nursing and Health Innovation (CONHI) because, he said, “There was a little bit of a vacuum on the downtown campus for entrepreneurial activity. There are great colleges that have students with entrepreneurial aspirations, but we didn’t really have the resources that you see on some of the other campuses.”

There were times when Hall, who teaches entrepreneurial courses for CONHI, was approached by such students and had to refer them elsewhere.

“So now,” he said, “instead of sending students away to SkySong or somewhere else, we have our own lab on campus where we can encourage students to come in, work together to ideate solutions to problems related to health and take the next step, and help them work on things like business plans and marketing, things that they need to start up their solution.”

At Wednesday’s soft launch, Hall was working with dietetics undergraduate Erin Washbon on a business model for her diabetic meal-kit company, which she hopes will help recently diagnosed diabetics adjust to the lifestyle change by providing well-balanced meals along with educational information. 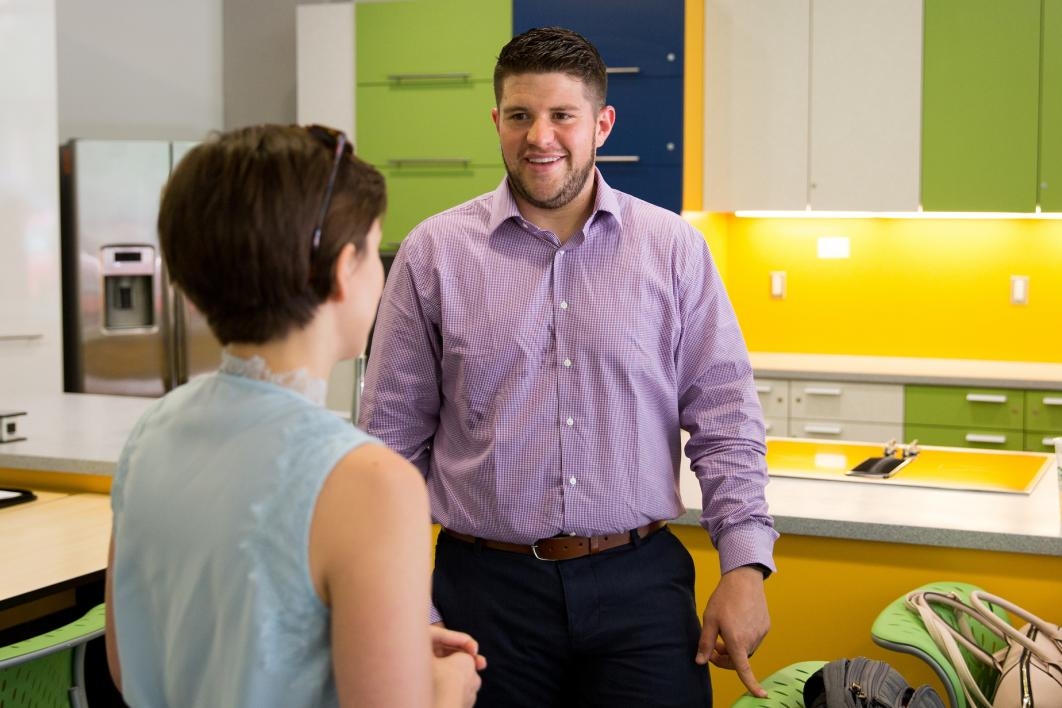 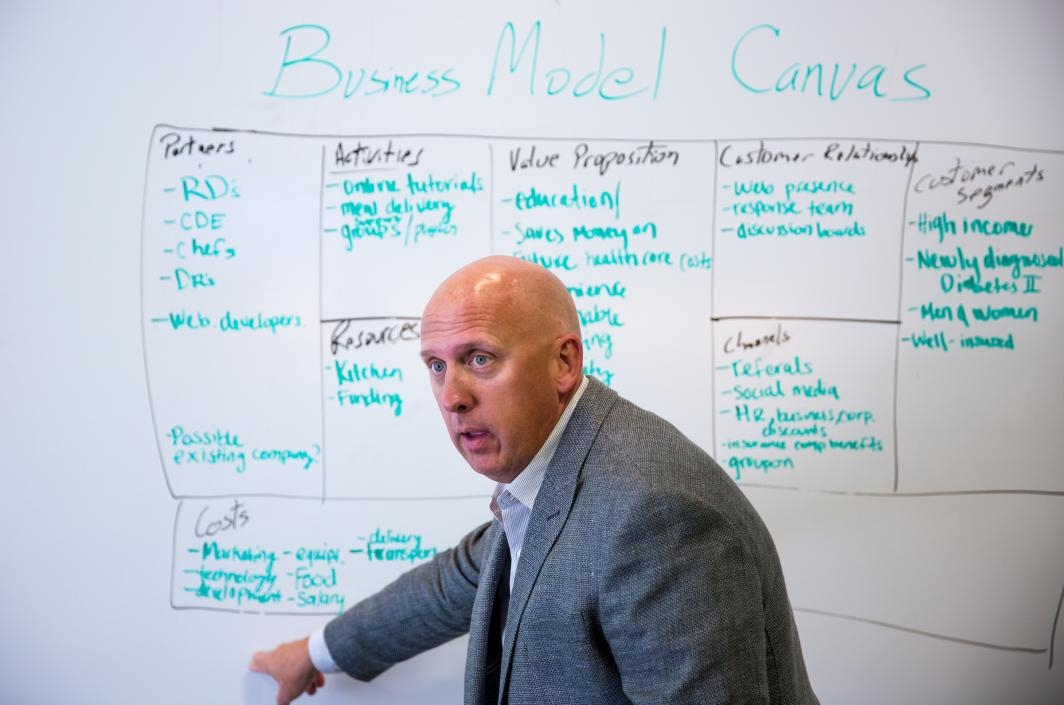 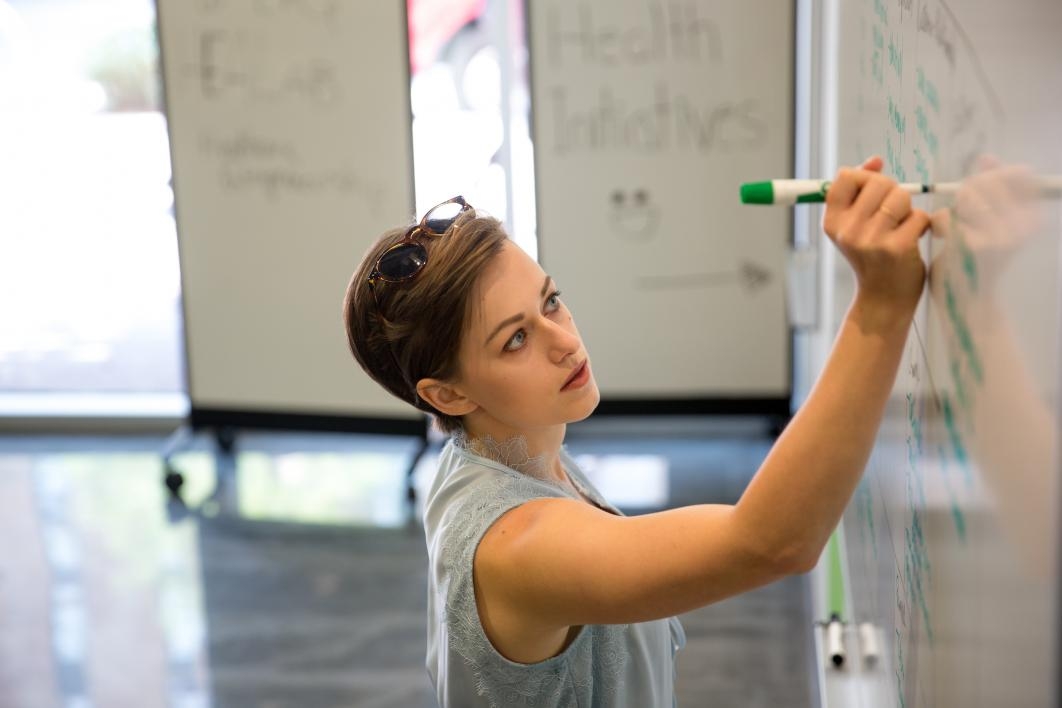 Erin Washbon hopes to create a diabetic meal-kit company to help those recently diagnosed with the disease adjust to the lifestyle change.

The way Hall and Washbon have approached the business plan — fluidly, by writing, erasing and rewriting lists under headers with labels like “resources,” “value proposition” and “costs” on a whiteboard instead of typing up a more traditional, fixed 10-page document — allows for flexible thinking and the ability to adapt as customers, markets and needs change.

It’s a brainstorming process Hall foresees all mentors and mentees at HEALab employing, followed by building a prototype and testing it out. Washbon, a junior, hopes to have a solid enough plan to pitch at one of the many ASU startup competitions before she graduates.

“There are so many invaluable resources at ASU, it would be silly not to take advantage of them,” she said.

And you don’t even have to be a student to do so.

Drew Saenz, a former student of Hall’s who graduated in 2015 with a degree in exercise and wellness, started a successful company called Team Up that focuses on providing fitness training to special-needs kids. He’s looking to branch out into corporate wellness and visited HEALab on Wednesday to brainstorm with Hall on ways to do that.

Hall immediately introduced Saenz to Washbon and urged them to exchange contact information. It’s clear he relishes these kinds of moments, opportunities for like-minded individuals to connect, share and perhaps create something new.

“A year from now, they could have a business together,” Hall said.

There are a handful of other projects Hall has been working with that he hopes to bring into the fold at HEALab, including a fitness app that uses an avatar to show people how their body will change; a nonprofit that hopes to provide detox services to infants of opioid-addicted mothers; and a business that would provide insurance for preventative health rather than treatment.

As it evolves, HEALab plans to offer a monthly speaker series (beginning Oct. 11); weekly networking and idea-generation meetings; pitch competitions; mentoring and office hours; a space in which all that can happen; and more. And it’s all available to students, faculty, staff, alumni and the general public.

“That’s really unique and smart because if we’re helping the community, it just helps us, and it helps with ASU’s mission of social embeddedness in the downtown area,” Hall said.

HEALab will also provide services to participants of Prepped, a free six-week program offered by ASU’s Office of Entrepreneurship and Innovation that began last year as a way to support entrepreneurs from underserved communities start food businesses.

The official grand opening of HEALab will be in October, but Hall encourages anyone interested in what it has to offer to stop by and check it out on the ground floor of Taylor Place, a residence hall on the Downtown Phoenix campus.

“Our goal,” said Hall, “is to connect the dots between these enormous opportunities for innovation and the resources to make them happen.”

For more information about HEALab, visit its webpage at nursingandhealth.asu.edu/healab.

Top photo: Erin Washbon meets with the director of the HEALab, Rick Hall, at Wednesday's soft launch of the entrepreneurial space. The startup incubator is geared toward health and wellness students on the Downtown Phoenix campus but is open to students of any major, as well as faculty, staff, alumni and the general public. Photo by Anya Magnuson/ASU Now

The flooding in Houston was exacerbated by how the city was built. Like many cities, Houston basically paved over the existing landscape, a grassy plain that evolved to handle large rainfalls by acting like a sponge.New ideas on how to build more resilient cities focus on working with nature, rather than trying to master it, says Arizona State University Professor Charles Redman, the founding dire... 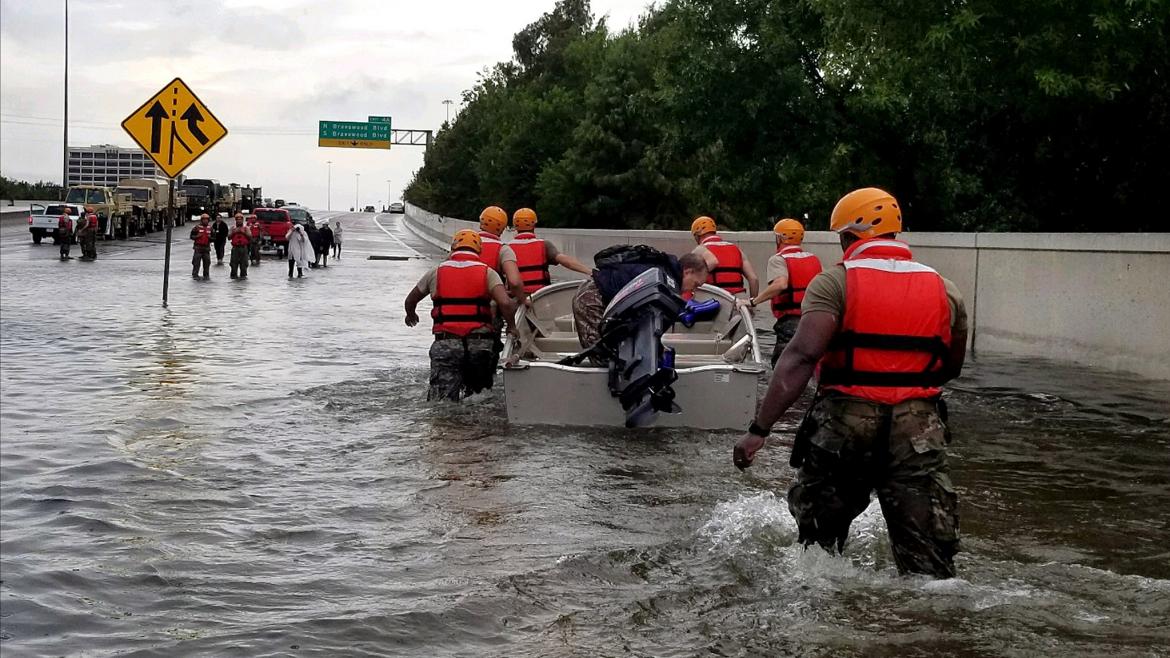 In the wake of Harvey and Irma, ASU's Charles Redman talks about how to make cities more able to weather calamities

The flooding in Houston was exacerbated by how the city was built. Like many cities, Houston basically paved over the existing landscape, a grassy plain that evolved to handle large rainfalls by acting like a sponge.

New ideas on how to build more resilient cities focus on working with nature, rather than trying to master it, says Arizona State University Professor Charles Redman, the founding director of ASU’s School of Sustainability and a distinguished scientist in ASU’s Julie Ann Wrigley Global Institute of Sustainability.

What this means, Redman says, is building infrastructure systems that are safe-to-fail, rather than fail-safe, and recognizing that the city should be able to take advantage of natural features of the land rather than to solidify it with concrete.

Here, he talks about how cities can be better prepared to withstand natural calamities.

Question: What can cities do to be better prepared for events like Harvey and Irma?

Answer: There are two areas of improvement, the first being altering the nature of the “hard” infrastructure, and second to enrich and make more effective the “soft” infrastructure of organization, cooperation, information flow, etc.

The overarching problem with cities like Houston is that they have built over the natural landscape with impervious surfaces, and with impediments to the natural flow of surface runoff. A more effective approach may be to implement infrastructure systems that work with the land to facilitate runoff rather than try to control it, but acknowledge and plan that if a specific threshold is exceeded and the system “fails” in some sense there are backup plans in place that minimize the adverse impacts.

Q: How does a safe-to-fail system operate vs. a fail-safe system?

A: This is about managing risk in an increasingly uncertain world. The fail-safe system assumes you know what is coming and that it can be handled if we build a big enough dam, levee, pipe, sea wall, etc., for protection. The problem is that many extreme events such as Katrina, Fukushima, Sandy and now Harvey go beyond the expected and result in disaster. A fail-safe approach seeks to totally prevent harm related to the weather event; however, if the event does exceed the design of the infrastructure there is little back up protection and disaster ensues.

In each case, much of the disaster might have been avoided or at least minimized through more effective awareness of the threats, better planning and well-thought-out responses. This is at the heart of the safe-to-fail approach that accepts the possibility that the hard infrastructure might be insufficient and has multiple back-up plans to ameliorate the impact. Using green infrastructure with secondary benefits, relying on multiple approaches, and moving people out of harm’s way are among the approaches to minimize negative impacts.

Q: What are some of the “soft” infrastructure approaches to becoming more resilient?

A: Short of changing the physical structure of the city, “safe-to-fail” strategies would focus on how the city prepares and responds to weather-related extreme events. The first is to map the relative vulnerability of people in different locations of the city, and as the event approaches the rescue teams don’t have to wait for 911 calls but can focus on the most likely areas to flood before the disaster develops.

The second is to develop a system of refuge centers that are appropriate to the scale of the potential dislocation and pre-plan strategies for getting people there. In Houston planned shelters were a fraction of the size needed. A separate issue is that two of the Houston’s reservoirs threatened to overtop their embankments. It is a common mismanagement problem that reservoirs are kept too full in order to maximize available water when they should be kept lower during hurricane season.

Q: What are some of the tools being developed in the UREx SRN program?

A: We are focusing on a variety of tools, and more, to build a method of bringing together the diverse elements of city government with relevant citizen groups to plan for future hard and soft infrastructure. Primary among the tools are a variety of green infrastructure constructions that take advantage of natural ecosystem services to ameliorate the impact of extreme weather events and then, in between events, to provide desired amenities like greenbelts and recreation fields. We are also constructing maps of populations most vulnerable to various types of extreme events and systems to minimize the impact on these populations.

Q: How does the program make cities more resilient?

A: We believe there are basic steps in gathering information, planning for the scale and intensity of events that were not common in the past, but are expected more today and in the future. We want to create planning templates that will ensure that cities are more “resilient-ready” to floods, heatwaves, droughts and other weather-related extreme events.

Another category of action that will enhance the capacity of a city to handle extreme events is to build the cooperative attitude of helping each other and working together to face the challenge rather than relying totally on outside interventions. Community members working together is the best line of defense to extreme events and can leverage and fill in with the outside interventions.

Top photo: Soldiers with the Texas Army National Guard move through flooded Houston streets as floodwaters from Hurricane Harvey continued to rise Aug. 28. More than 12,000 members of the Texas National Guard were been called out to support local authorities in response to the storm. Photo by U.S. Army photo by 1st Lt. Zachary West [Public domain], via Wikimedia Commons