ASU Parking and Transit Services (PTS) presented ASU America Reads with a check for $5,439 on Aug. 18. The 2016-17 PTS Benefactor Program recipient received the check in a ceremony at the H.B. Farmer Education Building atrium. 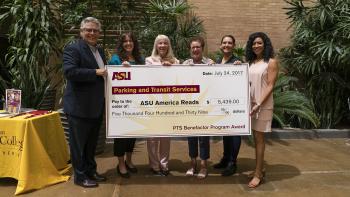 “It is an honor to lend our support to the campus community in a way that heeds the call of the university’s design aspirations,” said Melinda Alonzo, PTS director. “We appreciate the opportunity to assist worthwhile programs with community outreach as well as foster student success.”

“Not only does ASU America Reads benefit the community by increasing academic achievement in elementary and junior high students, but we are also giving ASU students an opportunity to serve a community need and gain real-world job skills,” said Faith Wagner, program coordinator. “We are deeply grateful to the PTS Benefactor Program. These funds will help us significantly as we continue to make a positive impact on our community.”

Benefactor Program recipients are awarded funds at the end of every fiscal year. Current donations will support next year’s recipient, the Hispanic Mother Daughter Program — a middle and high school program to increase the number of first-generation Arizonans who are qualified to attend ASU through direct family involvement.

When your major is just the starting point

Education is what’s left after you’ve forgotten what you learned in school, Albert Einstein said.Curiosity and learning how to learn — what some call being a master learner — are far more powerful indicators of success than a choice of major. A specific field of study might just be a stepping stone to something else.Only 51 percent of college graduates working said their job is related to ... 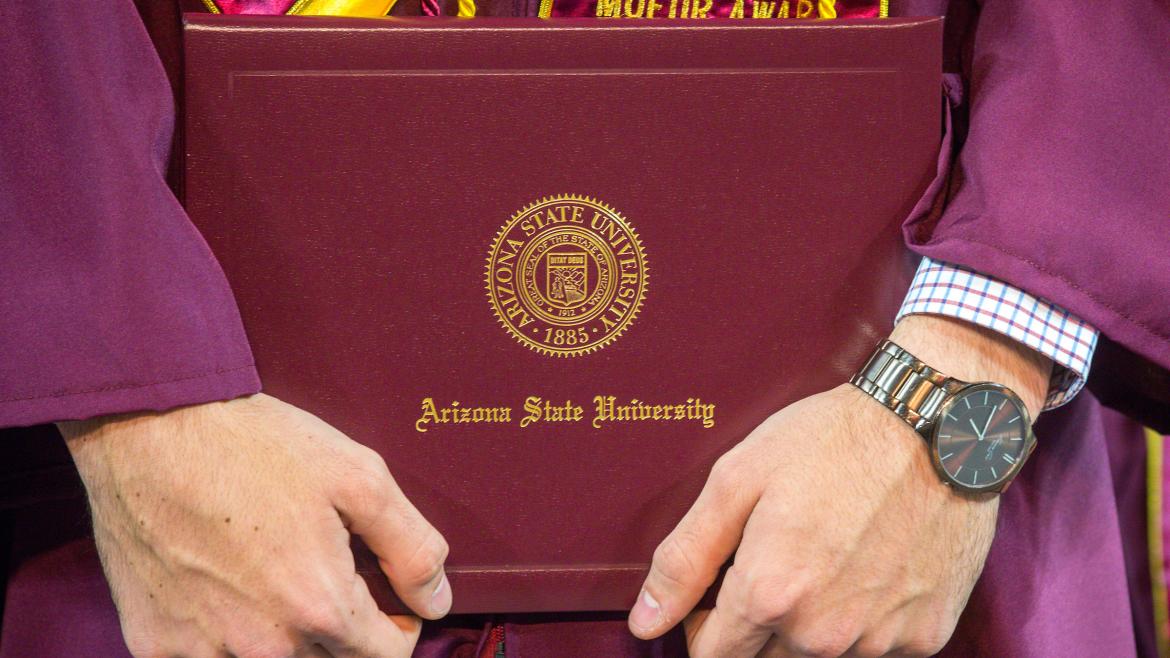 When your major is just the starting point

Your career may not match your degree and that's ok, say these ASU professors.
August 28, 2017

3 ASU faculty aren't doing what they originally set out to — and their lives are better, and more interesting, for it

Education is what’s left after you’ve forgotten what you learned in school, Albert Einstein said.

Curiosity and learning how to learn — what some call being a master learner — are far more powerful indicators of success than a choice of major. A specific field of study might just be a stepping stone to something else.

As crushing as that might sound right now to students immersed in differential equations or thesis wrangling, it’s not the end of the world.

In fact, it might be the beginning of a whole new one. Three of Arizona State University’s most accomplished faculty members aren’t doing what they set out to do, and they couldn’t be happier or more successful.

Rolf Halden is an engineer who practices chemistry. Phil Christensen is a planetary geologist who engineers instruments. Randy Nesse is a psychiatrist who studies biology.

Curiosity carried all three of them away. They more or less fell into what they do now.

Halden has a bachelor’s degree, two master’s degrees and a doctorate. He is the spokesman for the American Chemical Society, but of those four degrees, not one is in chemistry.

“I’ve found a place I really appreciate and love to work in,” Halden said. “I got the job based on being an engineer, but I keep the job by combining chemistry and biology and using the quantitative tools from engineering. It’s a convoluted professional path. It’s also a long one if you look at how many degrees I’ve picked up.”

Christensen has four instruments in space and three more slated for flight.

“For me, it’s really been fun,” he said. “I’ve gotten to the point now where I find coming up with the idea, designing it, making it happen and seeing the end product of this instrument that was a cartoon on the back of an envelope five years ago and now it’s a piece of hardware sitting on a desk — that is really satisfying. … That creative process is almost more fun than the science you do with that instrument once you’ve built it.”

Nesse became curious about evolutionary processes when he was a professor of psychiatry at the University of Michigan. He asked some biologists a few questions about evolution. They laughed at him.

“It was really made possible by these really receptive biologists at the University of Michigan,” said Nesse, founding director of ASU’s Center for Evolution and Medicine. “It really started with curiosity, not just about evolution again, but how things in the body seem out of design. ... A lot of it is we just can’t help ourselves. We get interesting ideas and that’s how we are.”

A chemist who isn’t 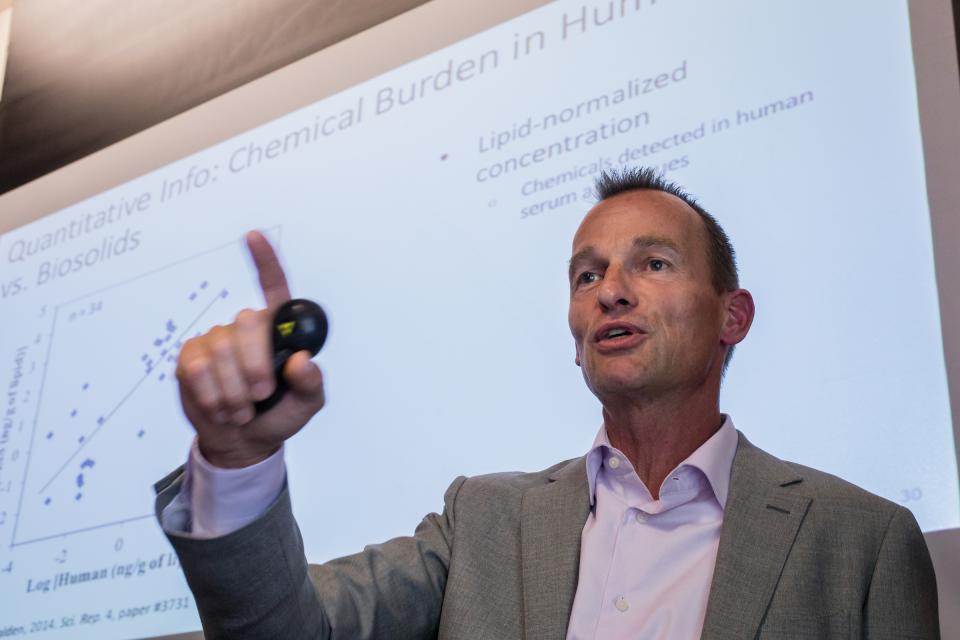 ASU Professor Rolf Halden (during a Feb. 8 lecture about his research on non-degradable toxins that reside for generations in humans' fat layers) is the spokesman for the American Chemical Society — but none of his four degrees is in chemistry. Photo by Charlie Leight/ASU Now

HaldenRolf Halden is director of the Center for Environmental Security at the Biodesign Institute, professor in the Ira A. Fulton School for Sustainable Engineering and the Built Environment, and senior sustainability scientist in the Global Institute of Sustainability at ASU. began his career studying zoology and botany in Germany.

“Then I looked at the job market and found there are not a lot of jobs in that area,” he said.

He specialized in microbiology, biotechnology, and sanitary engineering as a second elective, and earned his diploma.

“Even with those changes, there wasn’t a lot of opportunity,” Halden said.

He then started working on a doctorate in genetics: “I also thought this is probably not going anywhere good.”

He rebooted as an engineer by leaving Germany and studying civil engineering in the U.S.

“What I took from the biology was an understanding of microorganisms,” Halden said. “When I went into engineering, I used engineering quantitative tools to design remediation strategies for cleaning groundwater and soil.”

However, “neither engineering nor biology work well if you don’t have a good understanding of chemistry,” he said.

Halden always liked chemistry. When he started working in engineering, he worked on dioxins, cancer-causing agents that pollute groundwater and soil. He was in soil remediation, looking at how to move these carcinogens, using microorganisms that are supposed to gobble them up. In order to see what worked, he had to extract chemicals from soil and analyze them with tools like high-resolution mass spectrometers.

“In order to complete my studies I needed to learn analytic chemistry,” he said. “I always had an appreciation for chemistry. A lot of people don’t like chemistry. It’s just painful. I see chemistry as a unifying scientific discipline that brings all aspects together.”

Halden is a board-certified professional civil engineer, but he runs a mass spectrometry facility and is one of the experts for the American Chemical Society.

“They have selected me as a spokesperson to best represent their science, although I don’t carry a degree in chemistry, which is a bit bizarre,” he said.

A bug for space 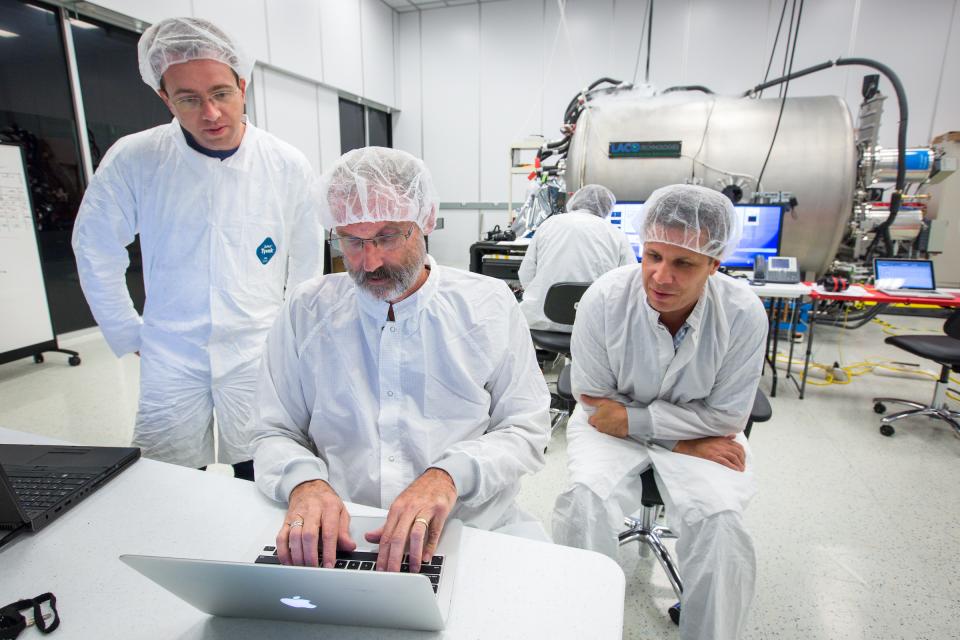 Phil Christensen (with doctoral student John Hill, left, and project engineer Greg Mehall last summer in the thermal vacuum test chamber on the Tempe campus) went from working on other's space instruments to proposing his own, to eventuallying helping design and build his own. The geologist has four instruments in space and three more slated for flight. Photo by Charlie Leight/ASU Now

Christensen was always interested in geology. When he was in high school, he watched the moon landing and became intrigued with space.

“But it never occurred to me growing up that I could work for NASA,” said the Regents' Professor in ASU's School of Earth and Space Exploration. “That was smart people.”

He got a degree in geology. During his senior year at UCLA, he worked for a guy who was building an instrument to go on a NASA mission to Mars.

Christensen went on to earn a doctorate in planetary geology.

“But that involvement with a mission ... that was an addictive process. It was so much fun,” he said. “You wake up every morning, and you go in and you see new pictures coming back from Mars today that no one has ever seen. Early on I really got this bug of wanting to be involved with missions: the exploration part, the new data, the new discoveries.”

Christensen knew he could be a part of someone else’s mission. A faculty member at Arizona State — Mike Malin, now CEO of a San Diego company that designs, develops and operates instruments to fly on unmanned spacecraft — said to Christensen, “Why don’t you propose your own instrument?”

Christensen called up an engineer he knew through his adviser and said he wanted to propose an instrument.

“I was 30 at the time. I knew nothing,” he said. “This man — Stillman Chase, who is still one of my best friends — was amazingly supportive. Here’s this young kid, calls him out of the blue, says, ‘Sure, come out to Santa Barbara. We’ll talk. We’ll see how this goes.’”

Christensen went out to the Santa Barbara Research Center, became a lead scientist and proposed an instrument.

“To everyone’s amazement, including my own, NASA selected that instrument to go on a mission,” he said.

Jump forward 20 years. The Santa Barbara company closed down. ASU wanted to build more capability on campus. About five years ago Christensen suggested hiring some of the engineers to come work for him at ASU.

“Now suddenly I find myself the CEO of a little aerospace company,” he said. “I’m now an engineer, working with 20 engineers. They look at me as sort of a pseudo-engineer: ‘OK, Phil — we’ll take it from here.’”

Jobs that don’t even exist yet 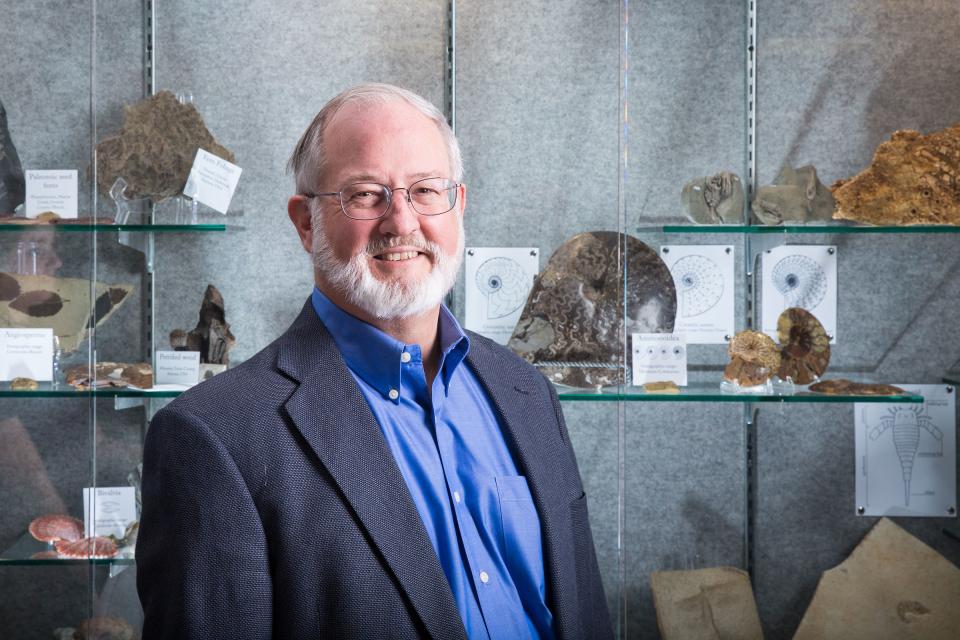 Randy Nesse was laughed at when, as a professor of psychiatry, he began asking biologists about evolution. He's now one of the world's preeminent researchers in the field of evolutionary medicine and is the founding director of ASU's Center for Evolution and Medicine. Photo by Deanna Dent/ASU Now

There are some pitfalls to avoid when transitioning from one field to another. Halden has a long and distinguished track record — his resume is 67 pages — of chasing chemistry through food and water and soil into people, but he is humble.

“I know I lack a lot of knowledge, which is a risk when you move into an area where you have not been formally trained,” he said. “There are things you are not aware of. You can make mistakes that others would not make, but you also bring more creativity and awareness of other fields with you.”

Now he builds instruments to go to strange places like asteroids and Jovian moons and study strange objects.

“It’s been this wonderful transition and it’s been a lot of fun,” he said. “I really enjoy what I do now.”

A lot of people in school right now will ultimately perform in a job that doesn’t even exist or for which there are no training programs, Halden said.

“That might sound odd, but if you look at the environment and the marketplace and how quickly it’s changing — self-driving cars and solar power and decentralization of a lot of services — people have to be willing and able to work in areas where they have not been trained,” he said. “It really pays off if you have engineering training because there are certain things you can always use that are always applicable.”

Nesse, a professor in ASU's School of Life Sciences, said he doesn’t consider his path as switching fields.