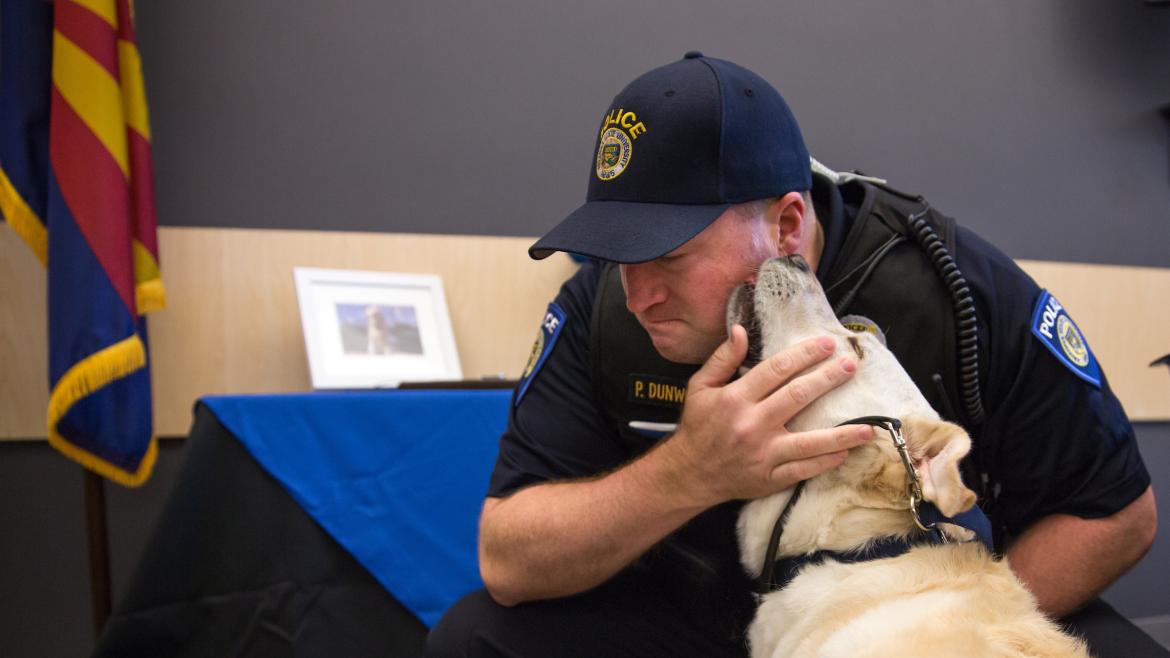 K-9 officer Disney has helped Arizona State University's Police Department take a bite out of crime for the past eight years, and now it's time for her to hang up her collar. In an event fit for a dog, Disney was honored for her service as an explosives-detection canine at an official retirement ceremony Aug. 23.

Members of the ASU and local community — many whose Disney's service has touched personally — came out to say farewell and thank the beloved dog who, as ASU Police Chief Michael Thompson said, was "an ambassador for police to the citzens that we serve."

Disney helped pave the way for the ASU Police Department's current K-9 program, and throughout her career she was deployed more than 300 times for special events, public demonstrations and crime scenes. She will retire with her human partner, Officer Parker Dunwoody, and his family.

"She's taken me on some good adventures," Dunwoody said during the ceremony. "She's the star; I just held the leash." 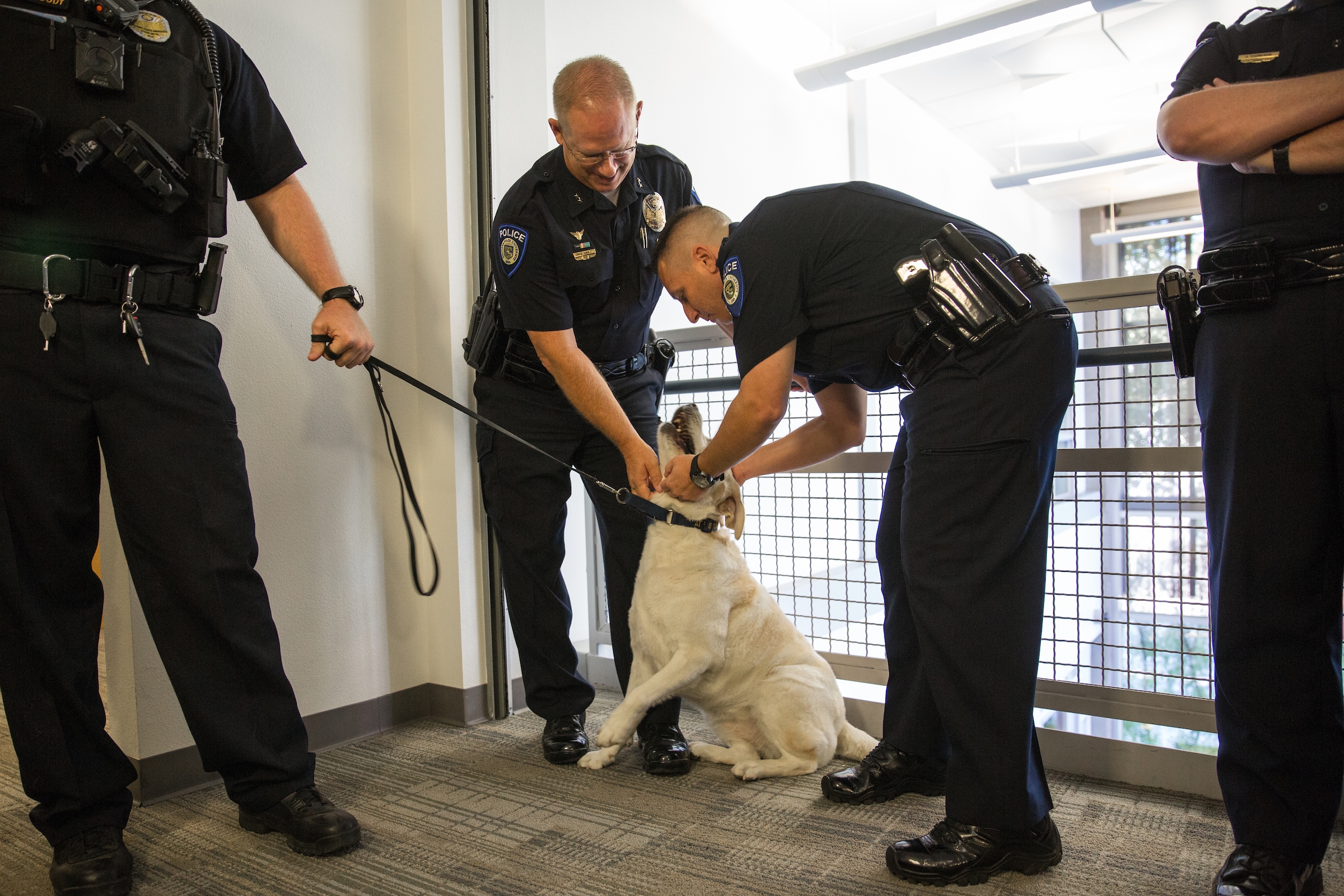 Officer William Orr (left) and Officer Chris Speranza play with Disney before her retirement ceremony in the ASU Police Department Building on Aug. 23. The ceremony was attended by ASU police officers, family, friends and four other trained K-9s. 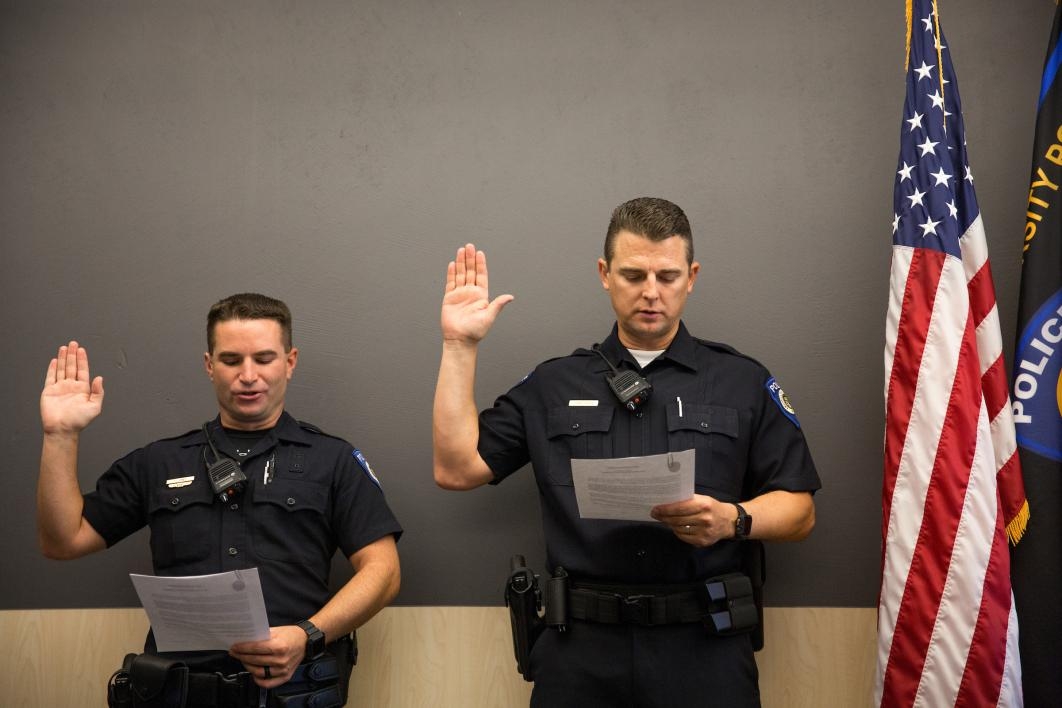 Officers Curtis Jones and Cory Zimmerman are sworn in at the beginning of Disney's retirement ceremony. ASU Police Chief Michael Thompson (left) presents Disney with a plaque to honor her eight years of service as an explosives-detection K-9 for the Arizona State University Police Department. Disney began her career in the Puppies Behind Bars program and graduated from the Bureau of Alcohol, Tobacco, Firearms and Explosives Canine Training Center on July 24, 2009. 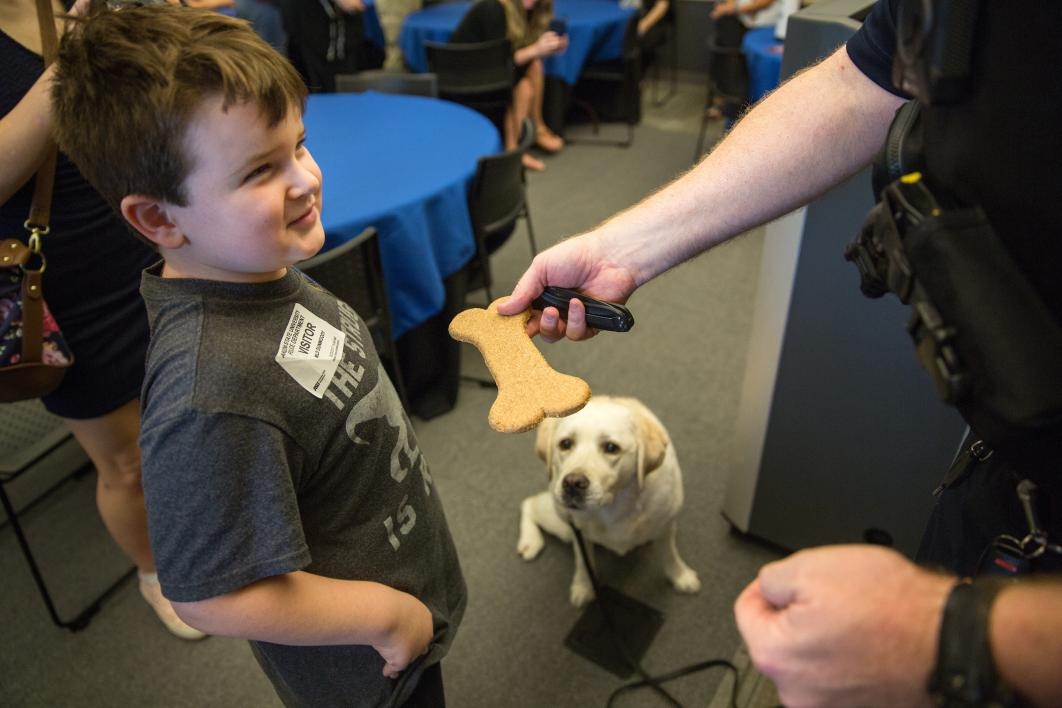 Officer Parker Dunwoody offers his son, Milo, the chance to feed Disney a treat. Because Disney was trained as a food-reward dog, the only person who was allowed to feed her during her eight years of service as a explosives-detection canine was her handler, Dunwoody. 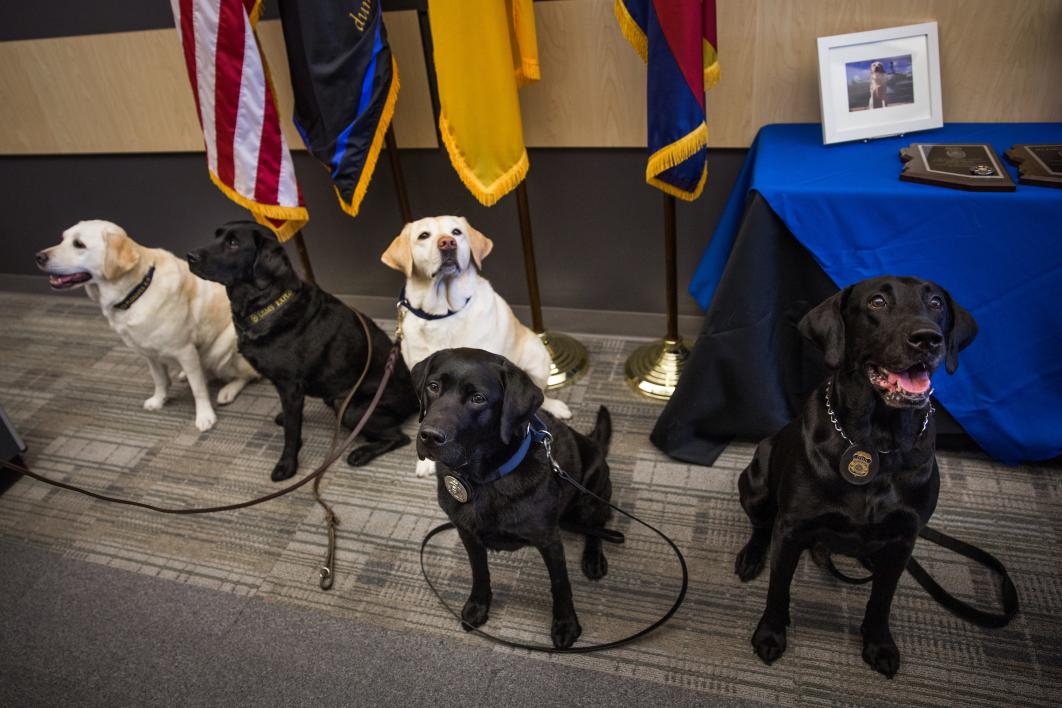 Disney's retirement ceremony is attended by four other trained K-9s: Joy, Aggie, Spring and Striker. All the dogs posed for a group photo at the end of the ceremony, with Disney on the far left. Bureau of Alcohol Tobacco, Firearms and Explosives (ATF) Special Agent Terry Besta instructs his explosives-detection K-9, Aggie, to jump up to the podium for a treat. Aggie began her career in the Guiding Eyes for the Blind Program and began training for her role as an ATF explosives-detection K-9 on Dec. 10, 2012. She currently works with the ATF in Arizona and New Mexico.

AZLoop off to SpaceX competition

The future of transportation left Phoenix in the back of a truck last week.After two years of work, thousands of man-hours, almost $1 million, hundreds of pages of documentation and one baby, Arizona’s multicollegiate effort to build a hyperloop pod left for competition in California.  “Fastest pod to the end without crashing wins,” team co-lead Josh Kosar said.The hyperloop is a high-speed... 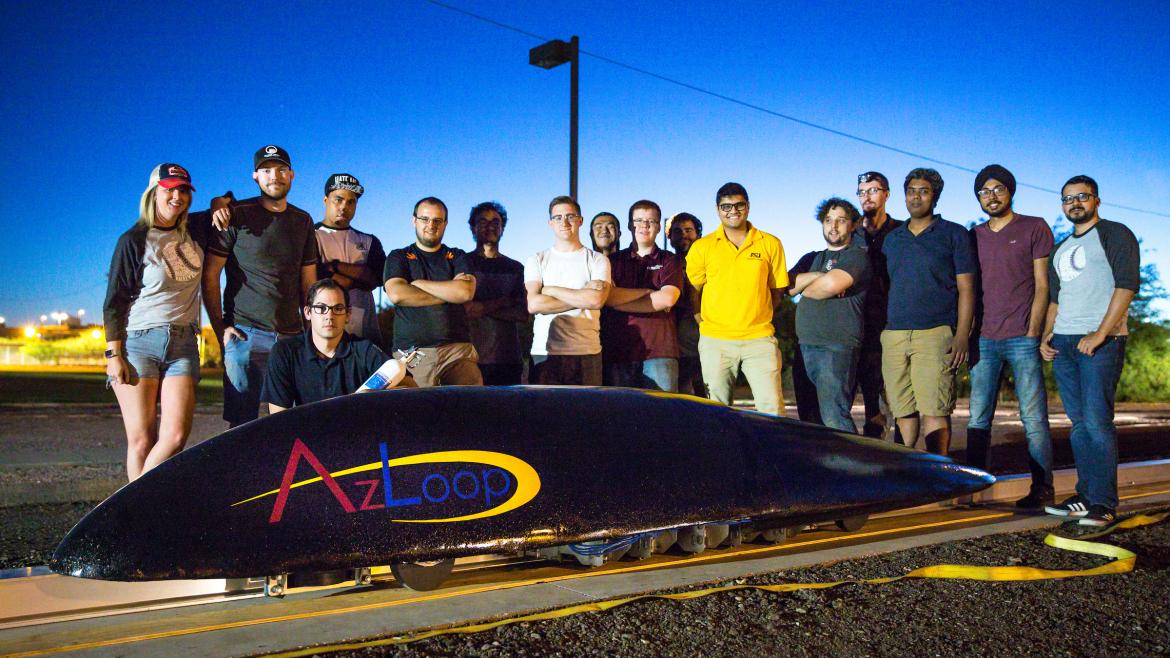 AZLoop off to SpaceX competition

The future of transportation left Phoenix in the back of a truck last week.

After two years of work, thousands of man-hours, almost $1 million, hundreds of pages of documentation and one baby, Arizona’s multicollegiate effort to build a hyperloop pod left for competition in California.

The hyperloop is a high-speed mode of transportation envisioned by entrepreneur and SpaceX founder Elon Musk. If it comes to fruition, the result will be a pod traveling through a vacuum tube, without friction, at speeds up to 700 mph. A trip from Los Angeles to San Francisco would take 35 minutes to travel the 350-mile distance.

The Arizona team, made up of students from Arizona State University and its Thunderbird School of Global Management, Embry-Riddle Aeronautical University and Northern Arizona University, built and tested the pod at ASU’s Polytechnic campus.

AZLoop is one of 17 teams selected from a field of more than 1,000. The team is seeded second. Competition is slated for Sunday at SpaceX headquarters in Hawthorne, California.

Not every generation gets to work on a completely new mode of transportation.

The final assembly phase “is actually really difficult,” team co-lead Lynne Nethken said. “You plan and you have this idea in your head of how it’s going to go, and then you put bolt to wrench and for whatever reason it just doesn’t quite fit like it’s supposed to. Those are all the little things we’re working through right now.”

It has taken two years of work, including eight months with the full team of 120. All team members were required to work at least 10 hours per week. The core group put in about 30 hours each week; Kosar has worked on the pod for about 70 hours a week since October. (He also welcomed a baby boy into the world, factoring into the gray bags under his eyes.)

Co-lead Nethken has also been putting in 70 hours per week. “Just between the two of us, you’re up to thousands of hours,” Kosar said.

No one got away with resume stuffing. Kosar fired 160 students over the course of the project.

“It was hard at first,” he said. “It gets easier and easier.”

The pod, a sleek black bullet packed with electronics, batteries, magnets and wiring, cost just under $1 million to build. Funding came from in-kind donations, faculty members and the ASU Foundation. The Polytechnic School and the Ira A. Fulton Schools of Engineering heavily supported the project, Kosar said.

“These are the final weeks,” Nethken said. “No matter what we do or how hard we plan, there’s something called Murphy’s Law. In fact, the last week I always refer to as Murphy’s Law Week. Something will go wrong. It will throw off the plans. But that’s the importance of having this wonderful team we have. It doesn’t matter what it is. We’re going to figure it out, we’re going to tackle it, and we’re going to be ready to go when we ship out for final competition.” 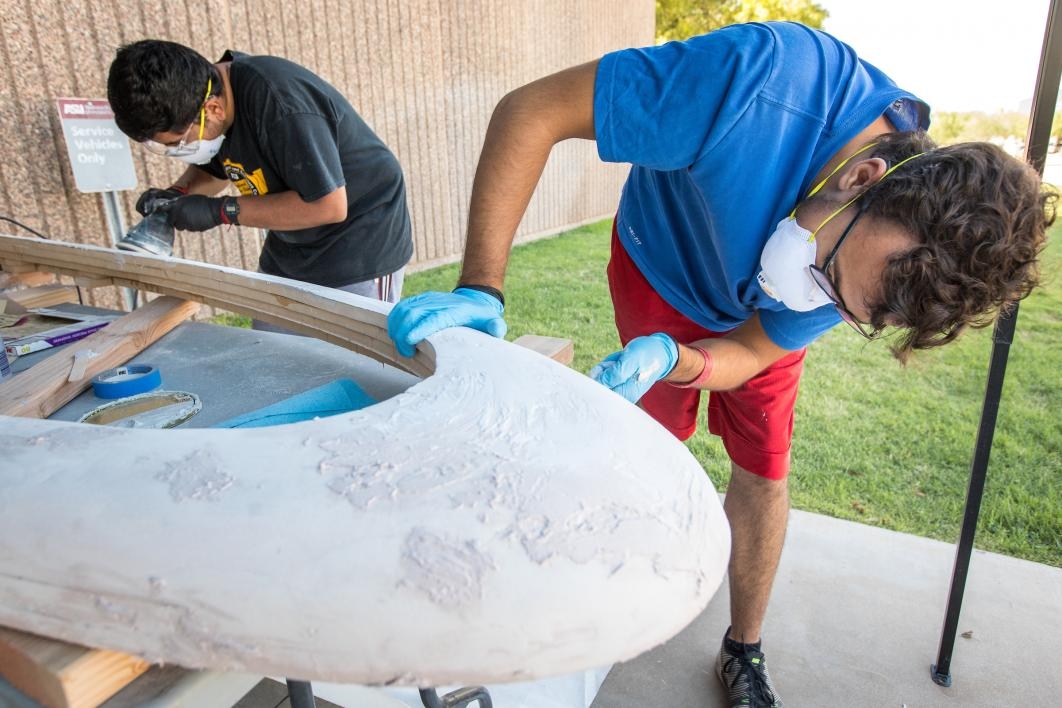 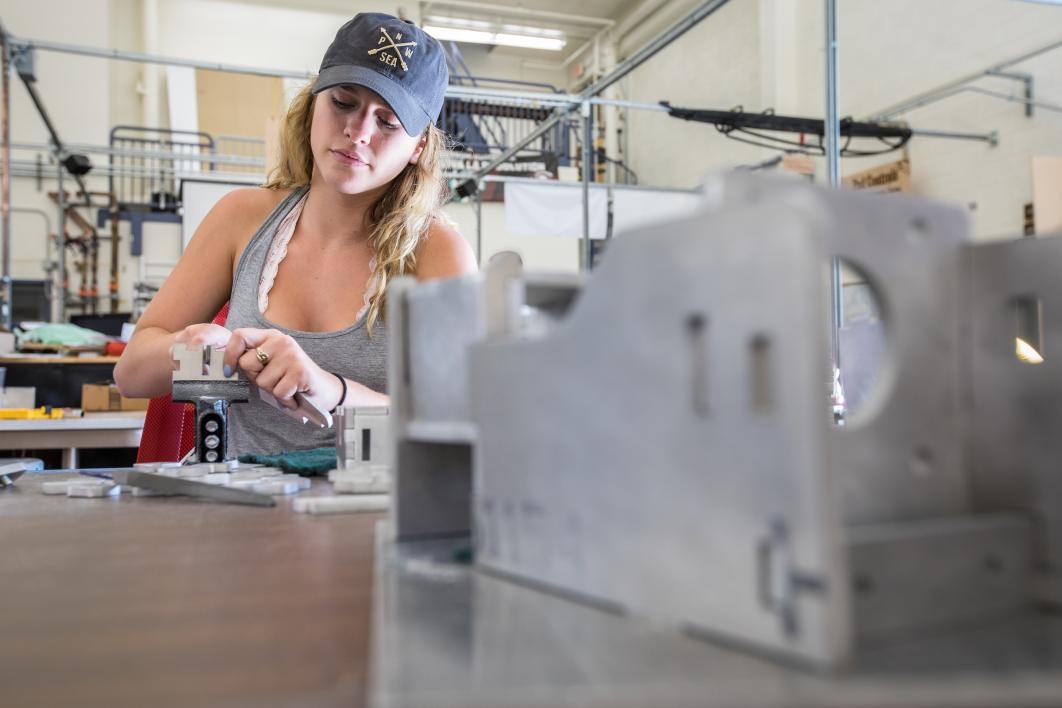 Levitation lead Megan Moore, a physics senior, sands components to get them ready for welding on July 28. 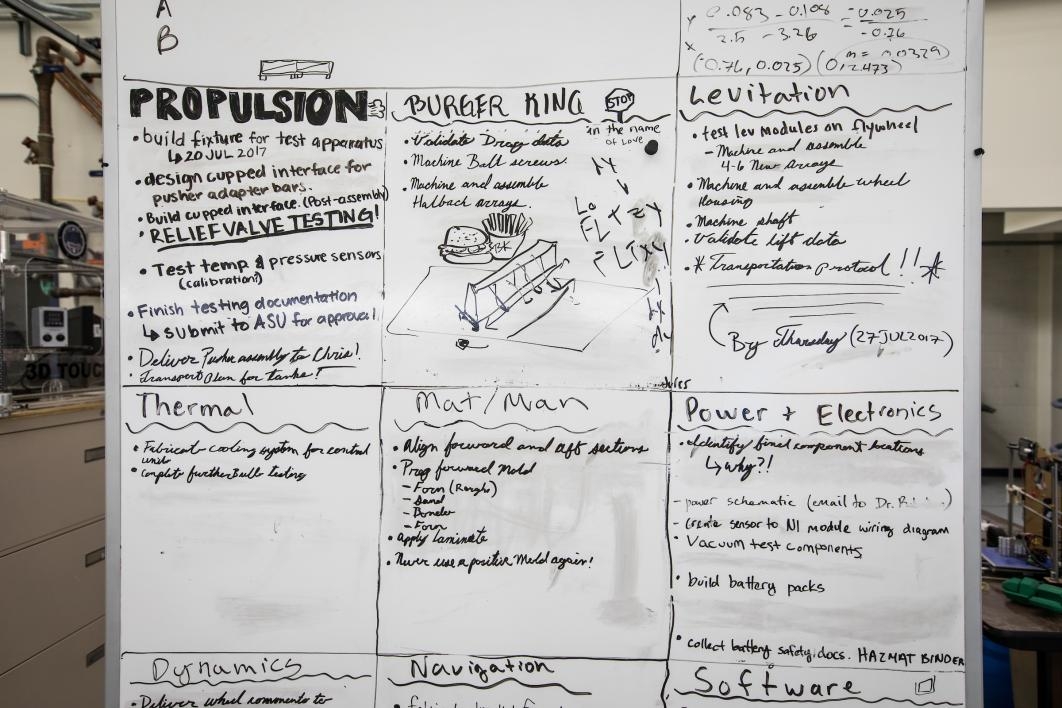 If any team member has a free moment, the task board has a vast list of needs to be completed for the AZLoop team's hyperloop vehicle. 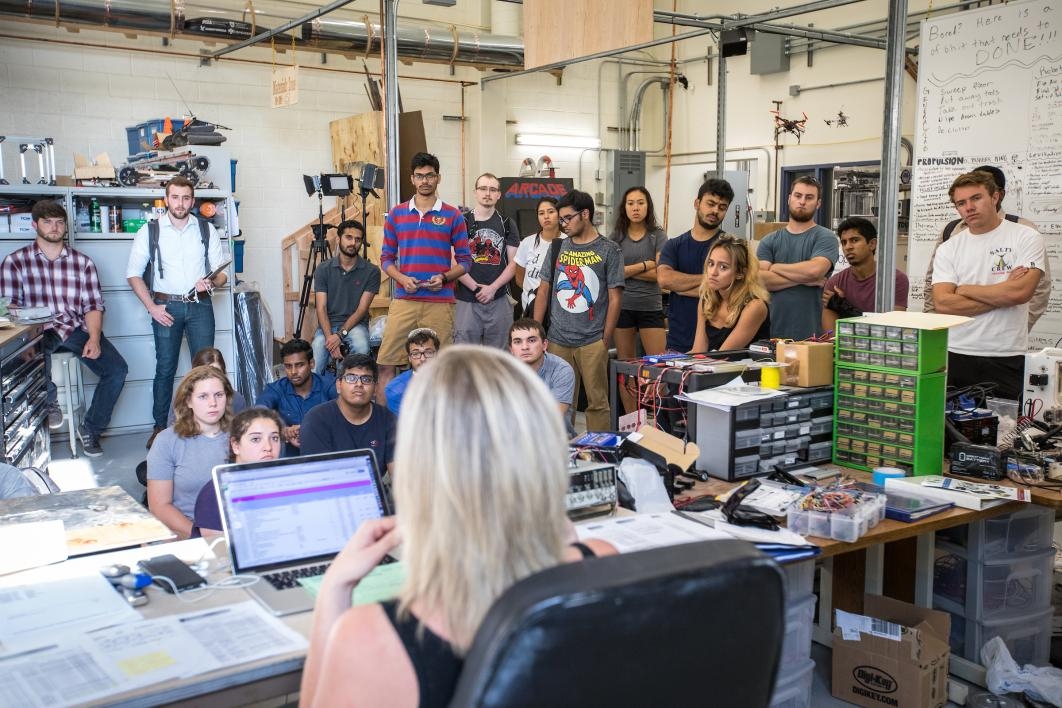 Team co-leader Lynne Nethken (front center) reviews what AZLoop team members need to do to get the vehicle finished during the group meeting July 28 at the Polytechnic campus. Manufacturing team lead Himanshu Dave and Kylie Graham discuss the process of the task of applying the first of three layers of carbon fiber to the back half (right) of the AZLoop team's vehicle model on Aug. 2. Graham is a friend of team members and works as a carbon fiber technician in the aerospace industry. The pod model is covered in plastic, which is painted with resin before team members (including mechanical engineering senior Brendan Trang, left, and Kylie Graham) apply more resin on the first of three layers of carbon fiber Aug. 2. The carbon fiber becomes the hull that goes over the pod's chassis. 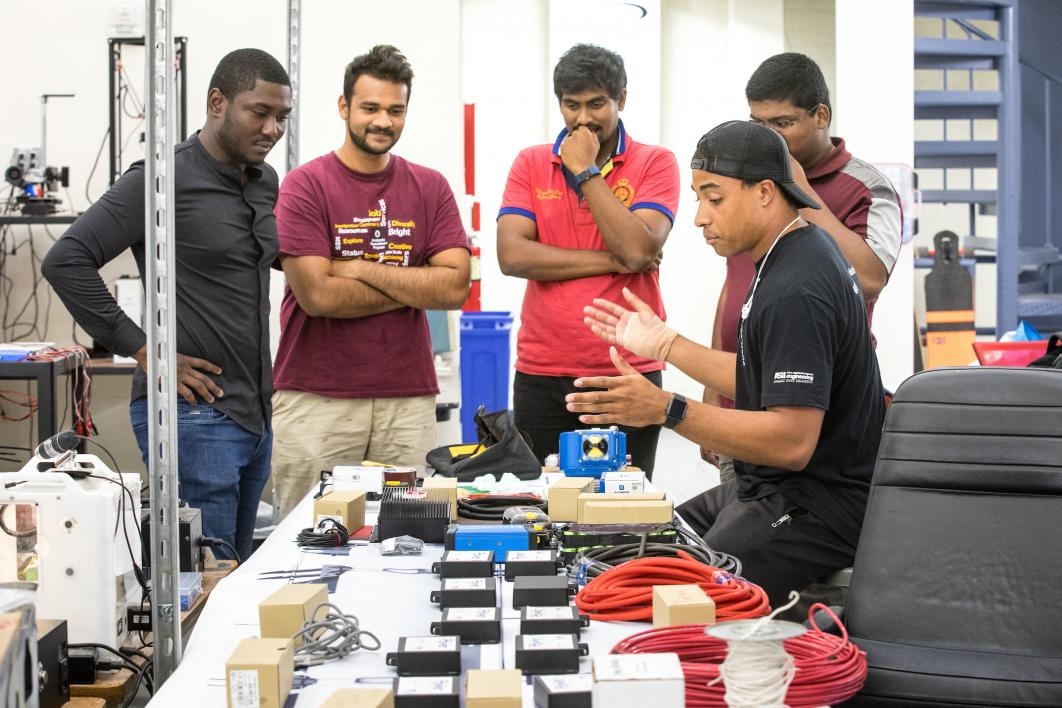 Mechanical engineering sophomore Jared Gates shows other members of the power and electronics team some of the components they'll soon be attaching to the chassis Aug. 2. The test dummy stands by as Marcos Valenzuela works on connecting wiring harnesses on the AZLoop chassis Aug. 14. At this point, there was less than a week, and a lot of testing to do, before the team took the vehicle to the SpaceX competition near Los Angeles. 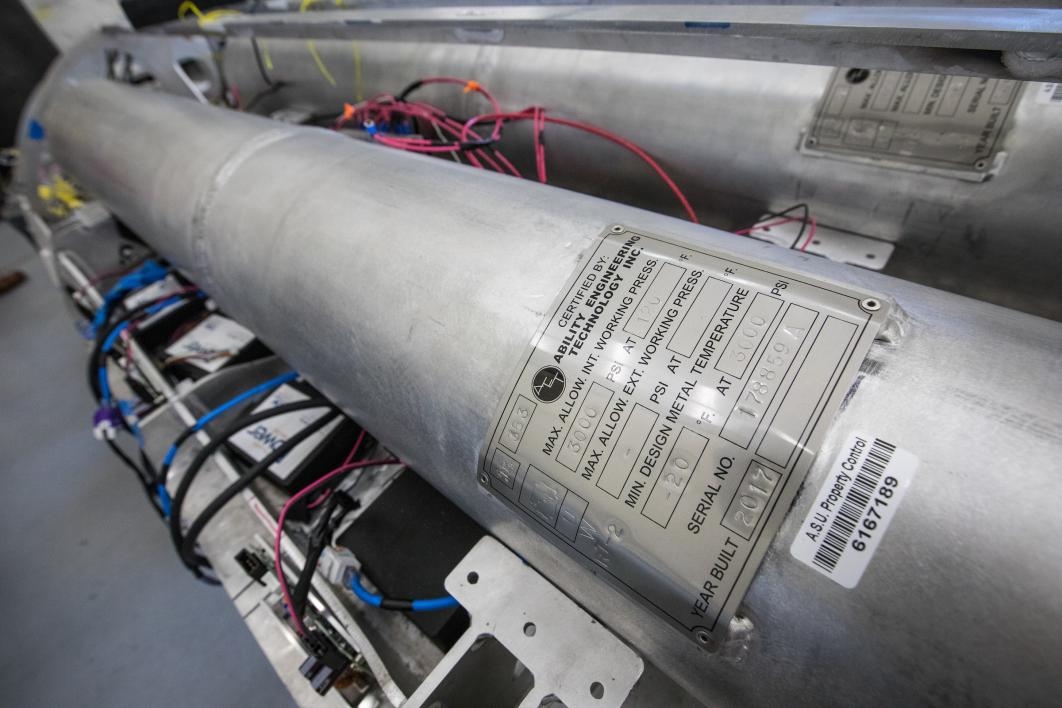 The high-pressure propulsion tanks will be filled with a fuel that will send the AZLoop pod down the track at 300 mph. 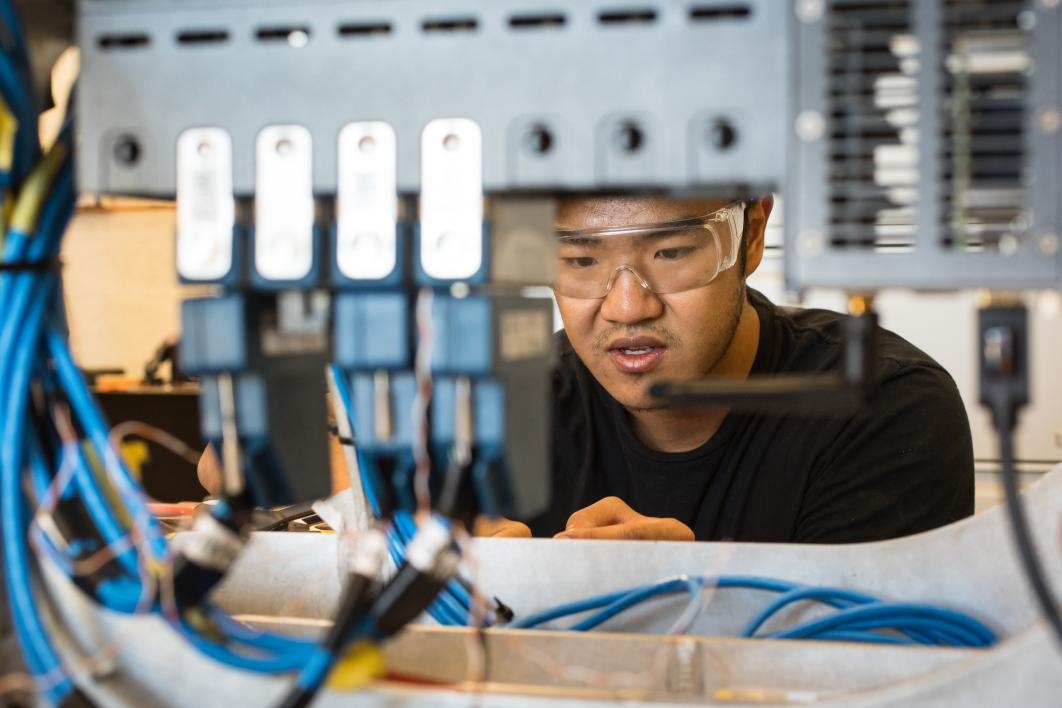 Mechanical engineering senior Brendan Trang mounts one of two kill switches on the side of the AZLoop pod chassis in the group's Polytechnic campus lab on Aug. 17. 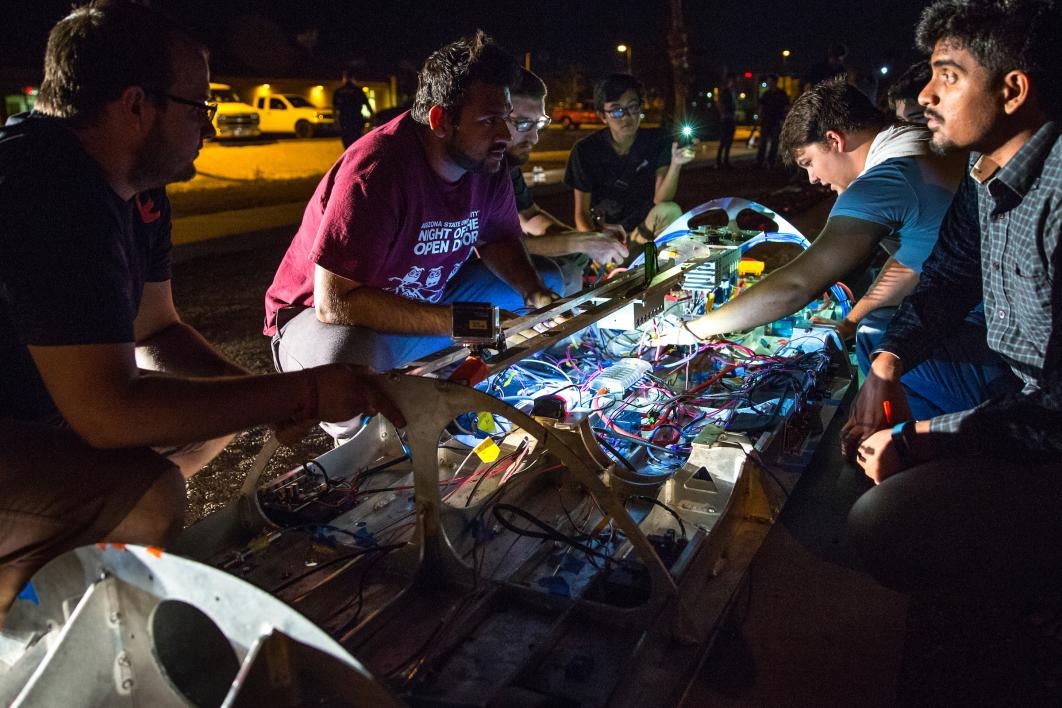 The AZLoop team works on the pod chassis at the group’s 150-foot test track on the Polytechnic campus in the pre-dawn hours of Friday, Aug. 18. The team would finish testing and finessing that day before packing up the vehicle and driving it to the SpaceX competition in California. 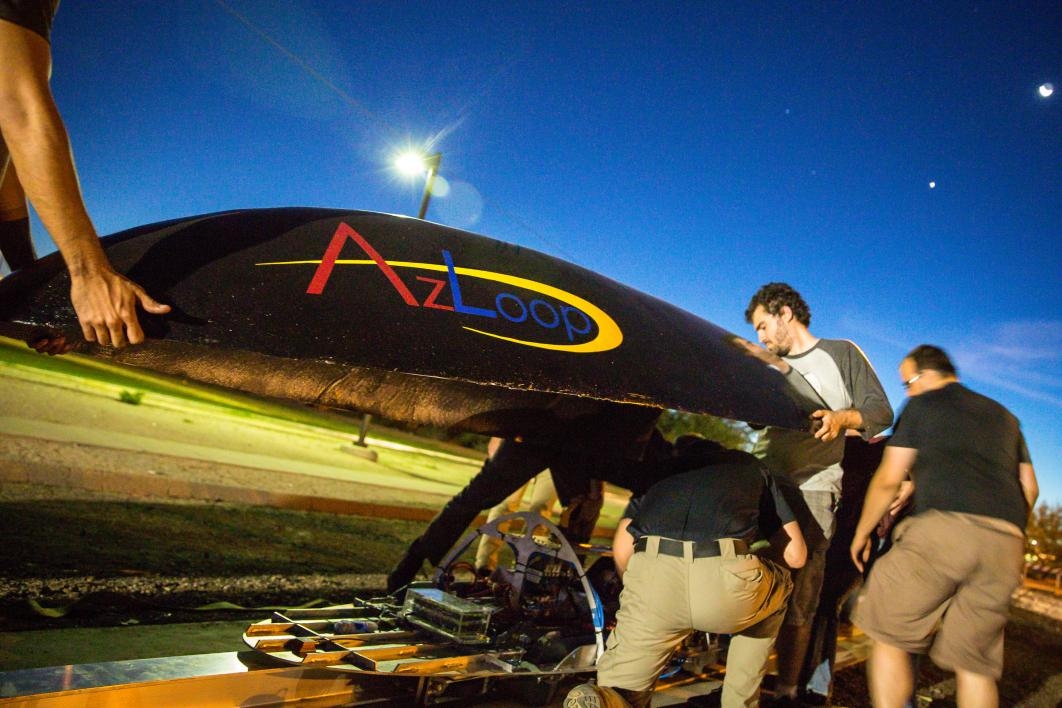 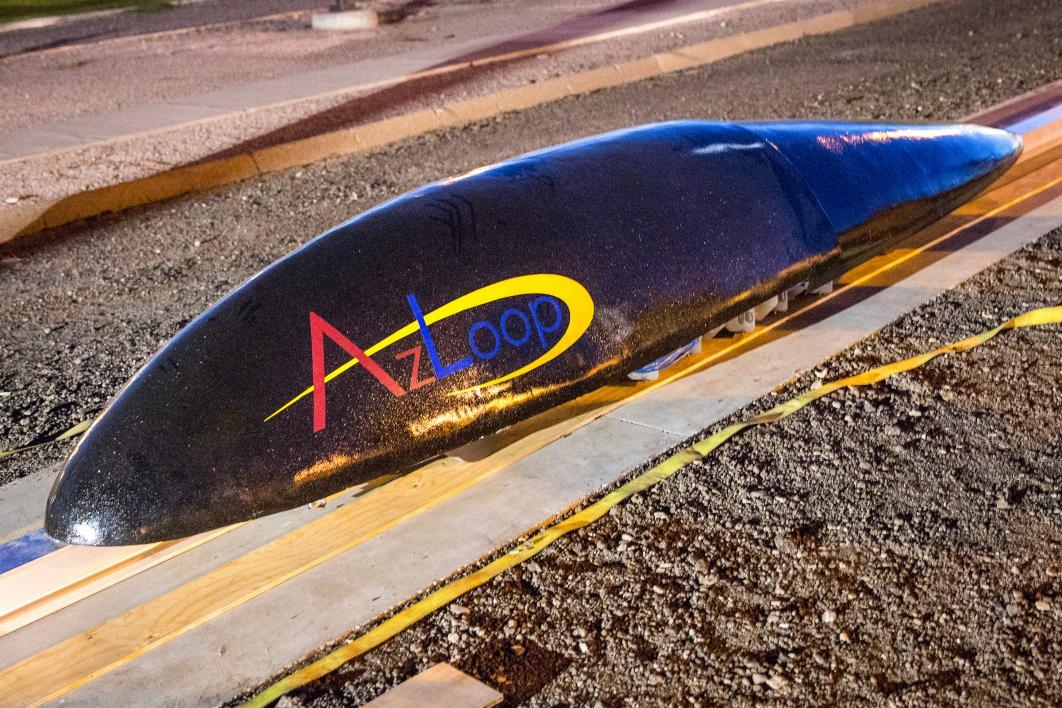 Success! A completed pod on the track. And now ... on to the SpaceX competition. Follow the ASU Now Twitter account at twitter.com/asunews for updates from Sunday's competition.

They did the engineering and analysis, then moved into a production team. “We have to make this into one final unit, so our team needs to be one final unit,” Nethken said.

Documentation for the final design package ran at about 400 pages. Safety procedures were incorporated into a separate 150-page document submitted to SpaceX. The magnets used for levitation are so powerful they can crush fingers and break bones.

“We’ve had to outline all of those details so we make sure we’re doing so in a proper fashion that’s safe and efficient,” Nethken said.

Ernest Poteat is production manager. His job is to think 10 steps ahead and identify problems before they appear.

“It’s basically me running around like a chicken with its head cut off, trying to solve problems that aren’t there yet,” he said.

“As with any large group of people working on one project, there’s always the slight shortfalls or the little things here and there that nobody thought about or thought to think about, and we’re meeting those challenges and for the most part we’re exceeding them,” Poteat said. “We’re trying not to let that stuff stand in our way. As an overall assessment of the team, this is one of the finest teams I’ve ever worked with. I see us doing great things.”

“Every piece of this is because we made it happen,” Kosar said. “It’s definitely a team effort.”

Poteat said a lot of people are going to be surprised at the end of the day at what ASU is capable of.

“It’s a direct relationship between the people who are supporting us from the top, and the leadership that they’ve instilled here at this level,” he said. “It’s exciting. I’m interested to see where it’s going to go.”

Top photo: Members of the AZLoop team pose with the competition pod at the group’s 150-foot test track on ASU's Polytechnic campus in the pre-dawn hours of Friday, Aug. 18. Photo by Ken Fagan/ASU Now