Ants genetically engineered to lack their “sense of smell” became unable to communicate, forage or compete to be a queen, as their antennae and brain circuits failed to fully develop. For the first time, researchers successfully shut down a crucial portion of the ant’s olfactory system by using the CRISPR-Cas9 technology.

This finding, stemming from a recent study conducted by Arizona State University scientists and their colleagues from New York University, University of Pennsylvania and Vanderbilt University, was published online today in the journal Cell. 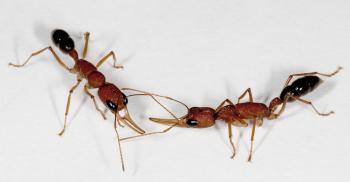 “While ant behavior does not directly extend to humans, we believe that this work promises to advance our understanding of social communication, with the potential to shape the design of future research into disorders like schizophrenia, depression or autism that interfere with it,” said corresponding author Claude Desplan, professor at New York University’s Department of Biology.

“We found that a species of ant may be the first model to enable in-depth functional analysis of genes that regulate social interaction in a complex society,” said study co-author Danny Reinberg, a professor with the NYU School of Medicine and investigator for the Howard Hughes Medical Institute.

Jürgen Liebig, an associate professor with ASU’s School of Life Sciences and expert in social insect societies, is also encouraged by the results.

“Having studied the behavioral plasticity, colony organization and chemical communication of the ant Harpegnathos saltator for more than two decades, I am happy to see that this charismatic species is finally maturing into a genetic model,” co-author Liebig said.

The current results are based on the fact that ants communicate through pheromones, secreted chemicals that trigger responses. Such odors are used to spread alarm as a predator approaches, leave a trail to food, indicate social (caste) status and signal readiness to mate, all within cooperative societies that achieve complex tasks. Ants can receive such signals because they have proteins called odorant receptors on their antennae, with each protein the right shape to bind to a specific odorant chemical.

For any odor or pheromone to be processed in an ant’s brain, however, past studies had shown that both the right odorant receptor protein and a shared, common partner protein called Orco must be present. The current team successfully engineered the genetic loss of Orco protein, which resulted in ants that could no longer perform some, if not all, pheromone-based social interactions.

Specifically, the altered young ants, unlike their nestmates without the changes, spent much of their time wandering out of the nest. They failed to interact with other members of the colony and were unable to forage and bring food back to the nest. Furthermore, mutant females no longer groomed males, a pre-mating behavior.

The current study focused on the Indian jumping ant, Harpegnathos saltator, which is unlike many ant species in which only the queen can mate and pass on genes to the next generation. Any Harpegnathos female adult worker can be converted into a queen-like state in the absence of the queen or other queen-like workers.

This is because the queen secretes a pheromone that suppresses the ability of workers to mate and lay eggs. If the queen is removed, the most aggressive females, after winning a series of antenna duels, undergo this transition, and can go on to produce progeny, which is essential for colony survival.

The current study found that, without Orco, the females cannot process pheromones, which makes them much less likely to engage in dueling.

“This ant system allows dissecting the organization of a society in which social interactions of all individually marked colony members can be tracked easily,” Liebig added. 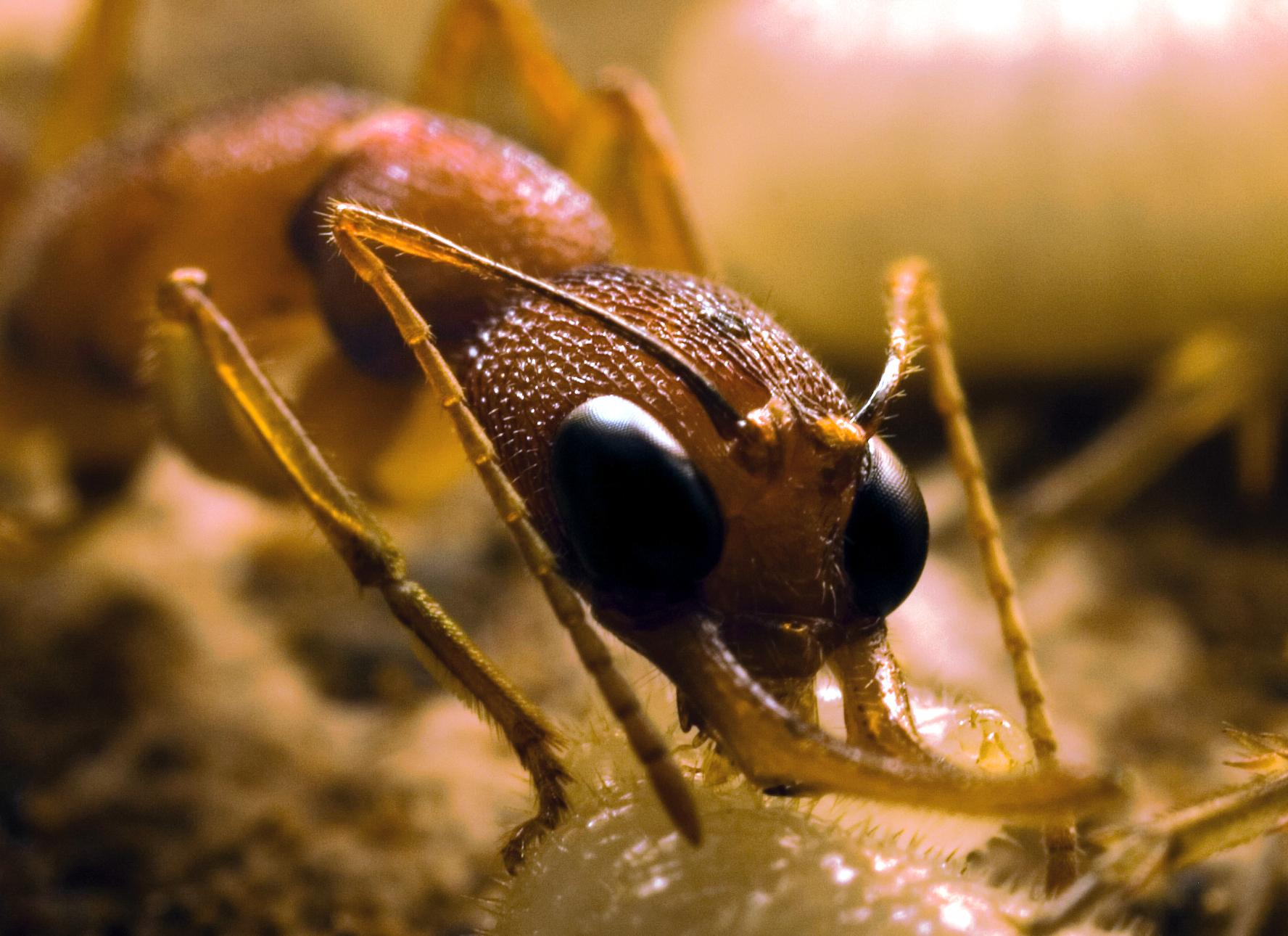 Another study result proceeded from the fact that each neuronal cell (odorant receptor neuron) capable of processing the presence of a given pheromone on the surface of an ant’s antennae sends out extensions that converge in a specific blob-like brain structure called a glomerulus. Information about that odor is processed there.

Past studies have suggested that, in solitary insects like mosquitoes, fruit flies and moths, the connections between odorant receptors and glomeruli are “hard-wired,” i.e. their neural development is independent of receptor activity. To the contrary, mammals appear to have odorant receptor cells with extensions capable of homing in on the correct glomeruli based on which odorant receptors they express. This makes the function activity-dependent in mice (and humans), in contrast to the hard-wired context of flies, say the study authors.

The new research suggests that Harpegnathos ants may also have evolved to have flexible, activity-based patterning of nerve connections, which has led to their expanded repertoire of olfactory receptors for detecting pheromones. This flexibility is required for communication based on the pheromone sensitivity and resultant activity of their olfactory neurons, say the authors. Accordingly, the loss of the Orco gene left female ants, on average, with just 62 of the 275 glomeruli that they would normally develop to process pheromone sensing.

Diamonds are among the most coveted objects in the world. As gemstones, they are brilliant, rare and symbolic. As a raw material, they are a physicist’s best friend.If you think about certain characteristics of a material — hardness, for example, or ability to conduct heat — diamonds are usually at one extreme end of the spectrum.“It’s surprising that a material so simple, just carbon at... 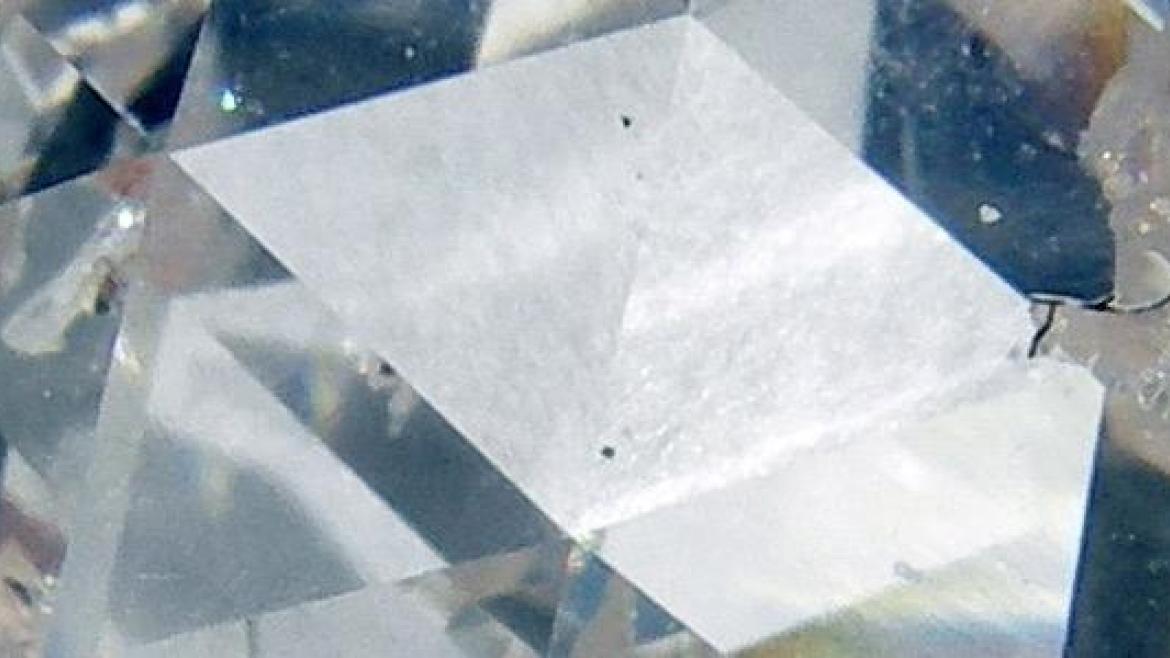 Diamonds are among the most coveted objects in the world. As gemstones, they are brilliant, rare and symbolic. As a raw material, they are a physicist’s best friend.

If you think about certain characteristics of a material — hardness, for example, or ability to conduct heat — diamonds are usually at one extreme end of the spectrum.

“It’s surprising that a material so simple, just carbon atoms arranged in this cubic crystal system, has such unusual properties in so many ways,” said Robert Nemanich, a Regents’ Professor of physicsThe Department of Physics is a unit of the College of Liberal Arts and Sciences. at Arizona State University.

As one of the world’s foremost experts on diamonds, Nemanich knows what they are capable of. And he has a different sort of proposal for how to use them.

Diamonds are the overachievers of the materials world. They can sustain incredibly high temperatures and electric fields. They also conduct heat better than any other material. These properties make them ideal for very specific applications.

Currently, silicon dominates the electronics market. It’s used to make everything from your cellphone computer chip and laptop processor to microwave ovens. But as versatile as silicon is, there are certain areas where it falls flat.

“When it comes to high-temperature, high-power, radiation-hard devices, silicon doesn’t work as well. In fact, it doesn’t work at all,” said Manpuneet Kaur Benipal, a postdoctoral researcher in Nemanich’s lab.

Benipal and her colleague Brianna Eller both received their doctorates from ASU. With Nemanich as an adviser, they are now starting a company, ADVENT Diamond, to make electronic devices out of diamond.

But we’re not talking about using recycled wedding rings. Eller and Benipal are working with doped diamond layers grown on small diamond plates. The ASU team even has a patent in the works for part of the growth process, called doping.

Take a tour of Robert Nemanich's lab and learn more about doping diamonds.

The term “doping” may conjure images of athletes illegally growing their muscles, but in the materials field, doping allows scientists to grow diamonds specifically for electronic purposes. Here’s how it works: You take a diamond substrate, or a small sample of diamond, and immerse it in a plasma composed of a mixture of chemicals. The atoms from the added chemicals organize themselves on the surface of the diamond, replicating the crystal structure of the substrate.

The lab-grown diamond layers that result include impurities that change the material’s electrical properties. Benipal and Eller use microfabrication processing of the doped diamond layers so that they behave precisely in the way they want. The process works so well that a small diamond can do the same work as materials that are much larger in size.

Does this mean we can expect to see tiny diamonds in our smartphones soon? Not exactly. Silicon continues to be more cost-effective for low-temperature applications, like cellphones and laptops. But diamond is a good choice for anything with a high-powered engine, such as an electric vehicle or an aircraft. Because diamond is excellent at conducting away heat, it would completely replace the need for a cooling system. Diamond also works well at very high pressures, which makes it perfect for deep-earth drilling.

We know diamonds’ ability to withstand extreme heat and pressure makes them superheroes in the world of electronic devices. But they have another power that scientists are harnessing to improve an entirely different field — cancer treatment.

Diamond is radiation-hard, meaning it takes much longer than most other materials to degrade under X-rays, gamma rays and fast charged particles. This property makes diamonds an ideal material to build radiation detectors for a variety of applications, including proton beam technology. This is a form of radiation therapy that precisely targets and destroys tumors with highly charged subatomic particles called protons.

Researchers at Nemanich’s lab, along with proton beam experts at Mayo Clinic Arizona, are working together to see if the use of diamond detectors can further enhance proton beam’s benefits to patients. Mayo Clinic is currently the only site in the Southwest to offer the technology.

Mayo Clinic’s intensity-modulated proton beam therapy features pencil beam scanning, which deposits streams of protons back and forth through a tumor. The beam closely targets the tumor, while largely sparing surrounding healthy tissue and organs from its radiation.

The researchers are studying to see if diamonds can be used as a detector for the pencil beam to go through. This could possibly help radiation oncologists further fine-tune the path of the protons, which could be particularly beneficial for pediatric patients.

“It’s most important in children to spare healthy tissues because those tissues are still growing, so we have to be very careful to treat as little of the healthy tissue as possible,” said Martin Bues, a proton beam physicist and researcher at Mayo Clinic’s Phoenix campus who is working with Nemanich and the ASU team on this project. 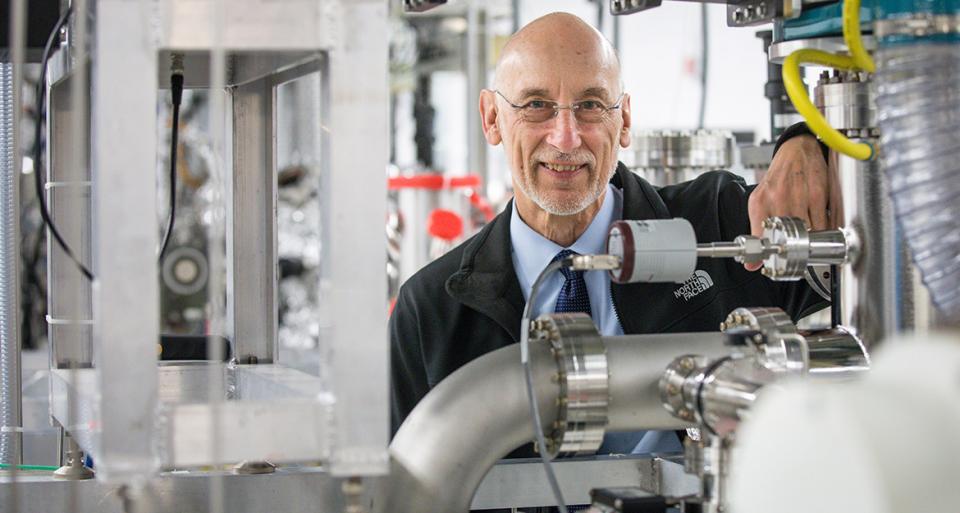 “It’s surprising that a material so simple, just carbon atoms arranged in this cubic crystal system, has such unusual properties in so many ways,” said Robert Nemanich, a Regents’ Professor of physics at Arizona State University. Photo by Charlie Leight/ASU Now

A diamond in the sky

If diamond is a material superhero, perhaps it’s only fitting that scientists want to send it into space. Nemanich was recently awarded a grant from NASA to build diamond electronics for a rover that will explore the surface of Venus.

How hot, exactly? To give you an idea, 450 degrees centigrade is about 842 degrees Fahrenheit. In comparison, the hottest weather ever recorded on Earth was a mere 129 degrees F, in Death Valley, California, in 2013.

Through the NASA grant, Nemanich and his team are building an amplifier, a device that increases the power of an electrical signal. But Eller said that diamond could be useful for other parts of the rover as well, since very few other materials can function in such extreme heat.

As demand for high-powered electronics increases, diamonds will have an even larger role to play. Space exploration, electronic vehicles and deep-earth drilling only scratch the surface of potential applications.

Just as silicon brought about a new era of electronics, novel materials often drive the progress of new systems and devices. Perhaps the most exciting applications for diamonds are those that haven’t been thought of yet, since diamond would enable them to be built.

“There is always a need for something bigger, something better, something more efficient, something that works at higher temperature or higher voltage, which we think diamond can do,” Eller said.