The Summer Health Institute, led by senior director of academic services Nate Wade, has provided nearly 100 high school seniors the opportunity to experience various aspects of health and health care prior to enrolling in college. For the first two cohorts, 100 percent enrolled in either a community college or a four-year university. 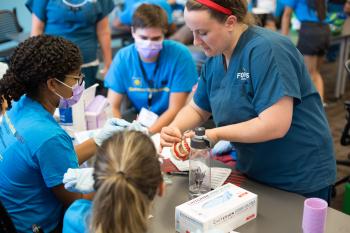 “Half of our Summer Health Institute alumni have enrolled at ASU with many also choosing to join Barrett, The Honors College,” Wade said.

“This program wouldn’t be possible without the dedicated financial support, time and energy from our sponsors and volunteers,” Wade said.

Over the course of the weeklong program, the students connected with members of the medical community and had a taste of what they do on a daily basis. Through three hours of daily simulations at the ASU Simulation Center and the University of Arizona College of Medicine-Phoenix campus (scrubbing, gowning and gloving, taking vitals, IVs, suturing, ultrasound, intubation, cadaver examination), they engaged in hands-on activities most college undergraduate students would not have had the opportunity to experience until professional school.

They also toured health care facilities located within the health corridor of Arizona, including Creighton University School of Medicine at Dignity Health St. Joseph’s Hospital and Medical Center, which was a new addition to the program.

The students who participated in this year’s activities — along with program counselors like ASU student Joshua Slusher — enjoyed their exposure to health fields they did not even know existed. Slusher is a medical studies major in the College of Health Solutions and a Residential College Student Leader. He and the participants interacted with nearly every component of the medical professions: physician assistants, nurses, hospital residents and medical school students, dental hygienists, physicians, physical and occupational therapists, and administrators within hospitals and medical schools.

Camp participants met and talked with some outstanding professionals in the medical field, including Dr. Richard R. Heuser, a world-renowned cardiologist and member of ASU College of Health Solutions’ Development Council (who demonstrated a sheep-heart dissection and stents); Dr. Randy Richardson, a radiologist and the Phoenix regional associate dean at Creighton University School of Medicine; and Dr. Teresa Wu, emergency medicine attending physician and director of Emergency Ultrasound Program and Fellowships for Banner University Medical Center-Phoenix.

The experience was not only enlightening, but it gave both the students and the Summer Health Institute counselors the opportunity to exercise their networking skills, which they will need in the near future to build their professional connections. 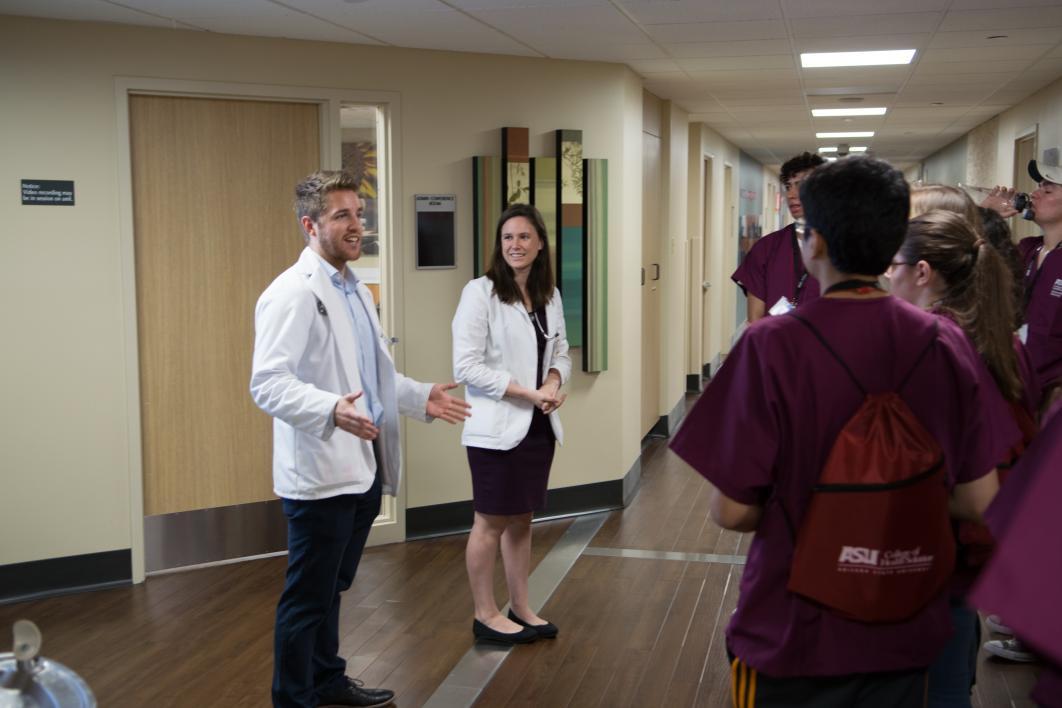 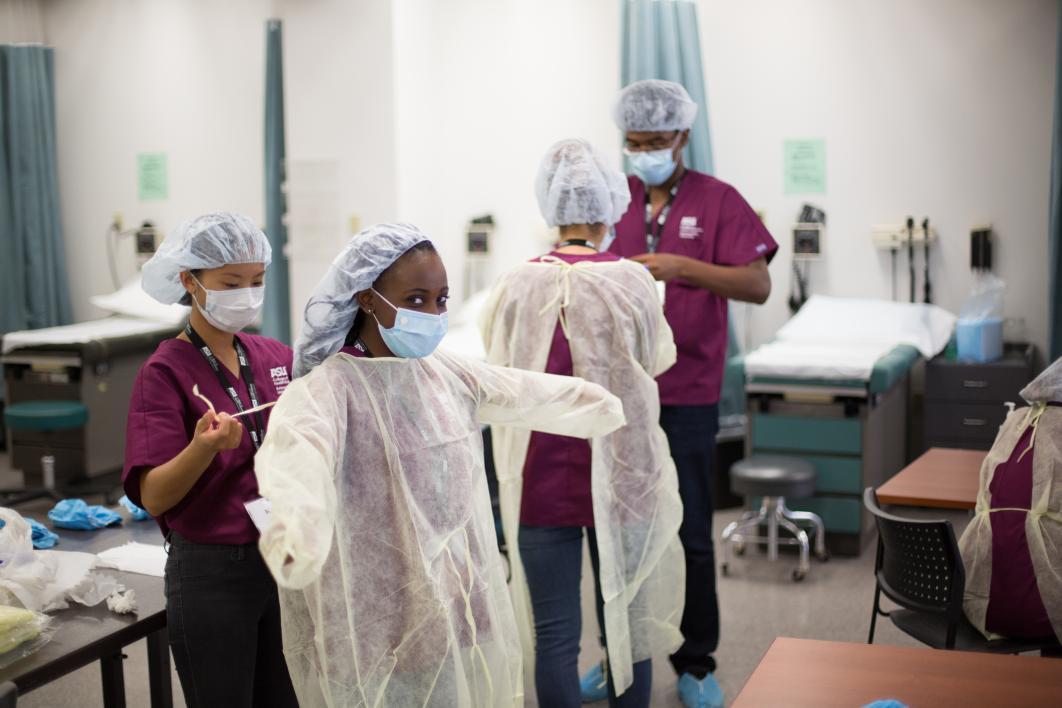 Summer Health Institute participants learn the proper procedures for gowning and gloving prior to entering an operating room. 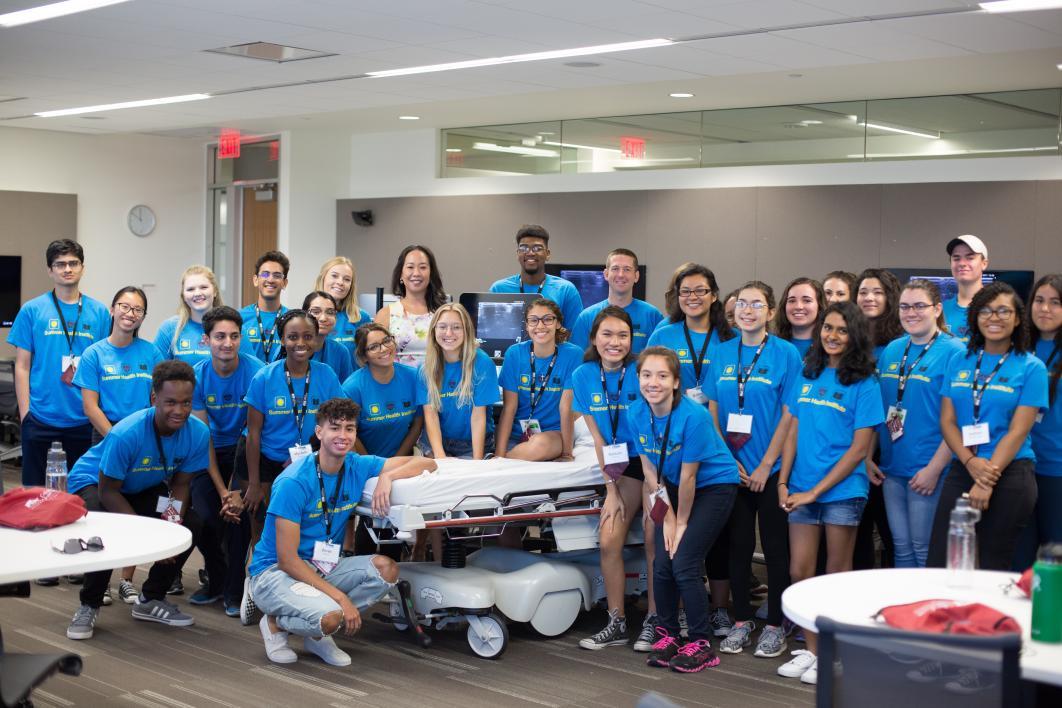 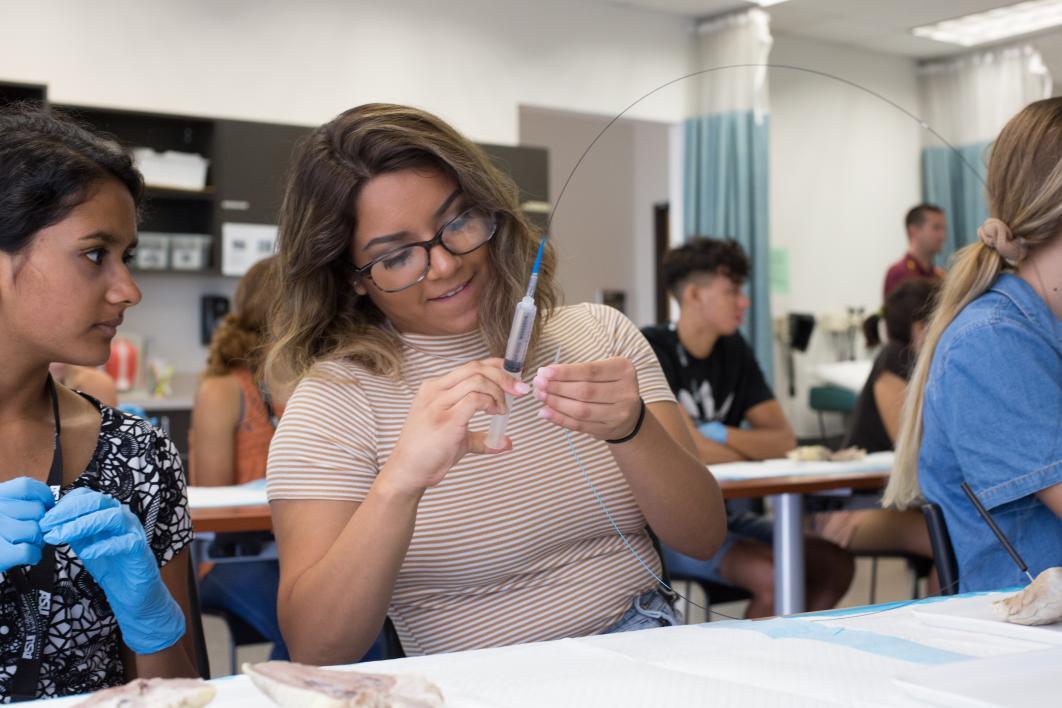 Summer Health Institute students use a syringe to see how a stent would be used to open up a clogged artery. 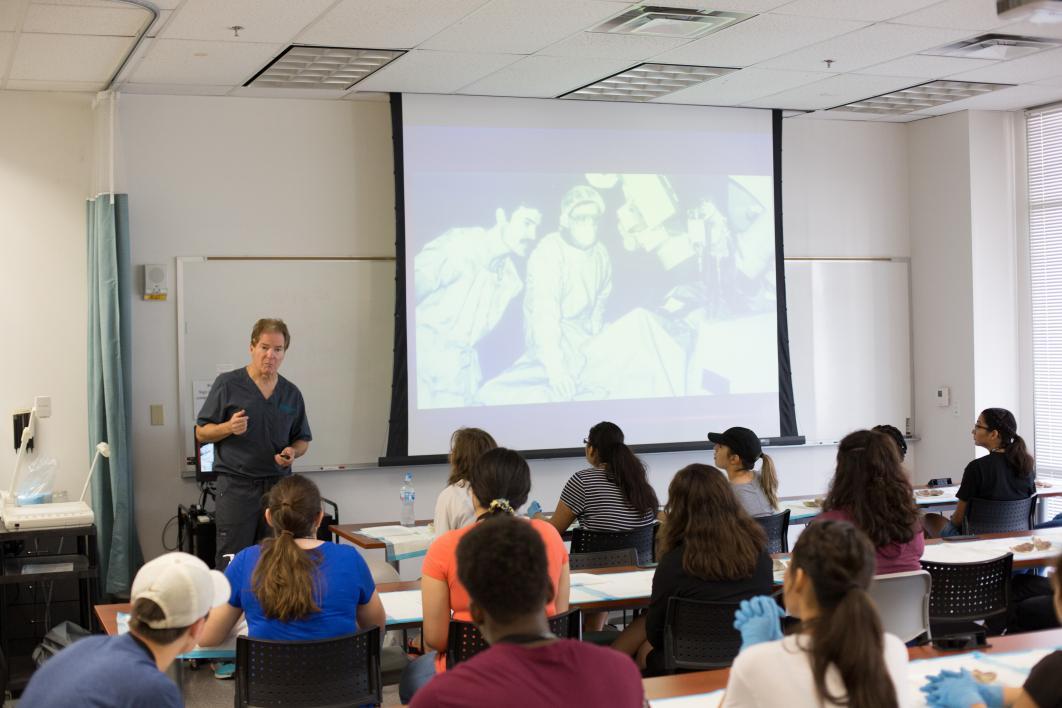 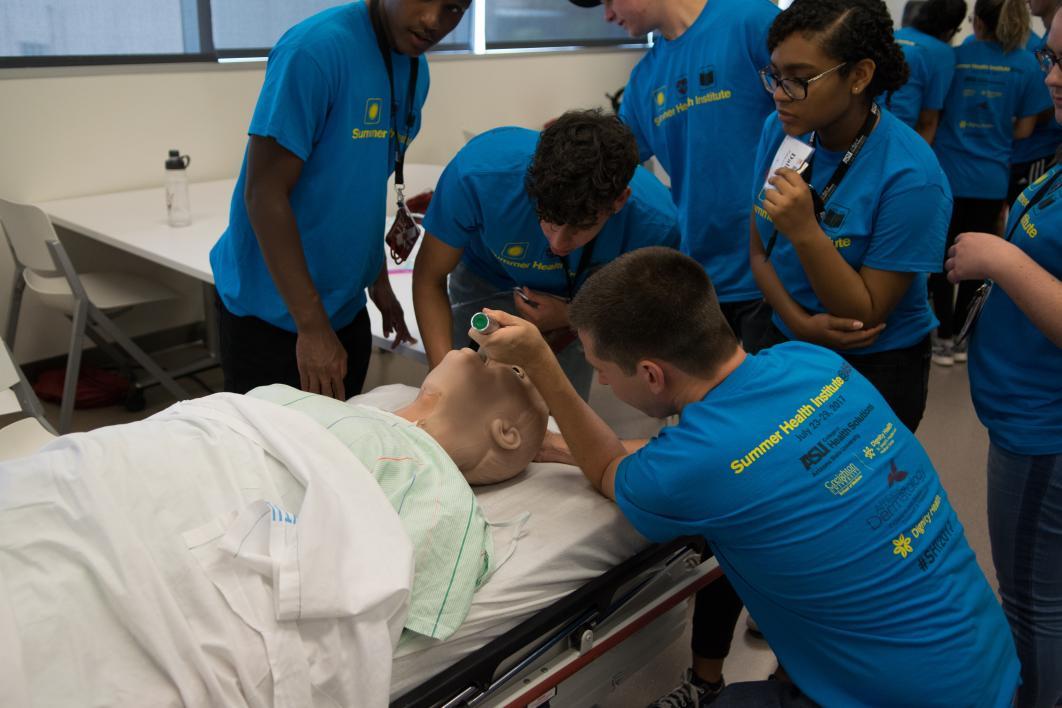 Nate Wade shows students participating in the Summer Health Institute how to identify the vocal cords when performing intubation. Clinical professor and interim director of the School for the Science of Health Care Delivery Dr. Alison Essary demonstrates how to take vitals. 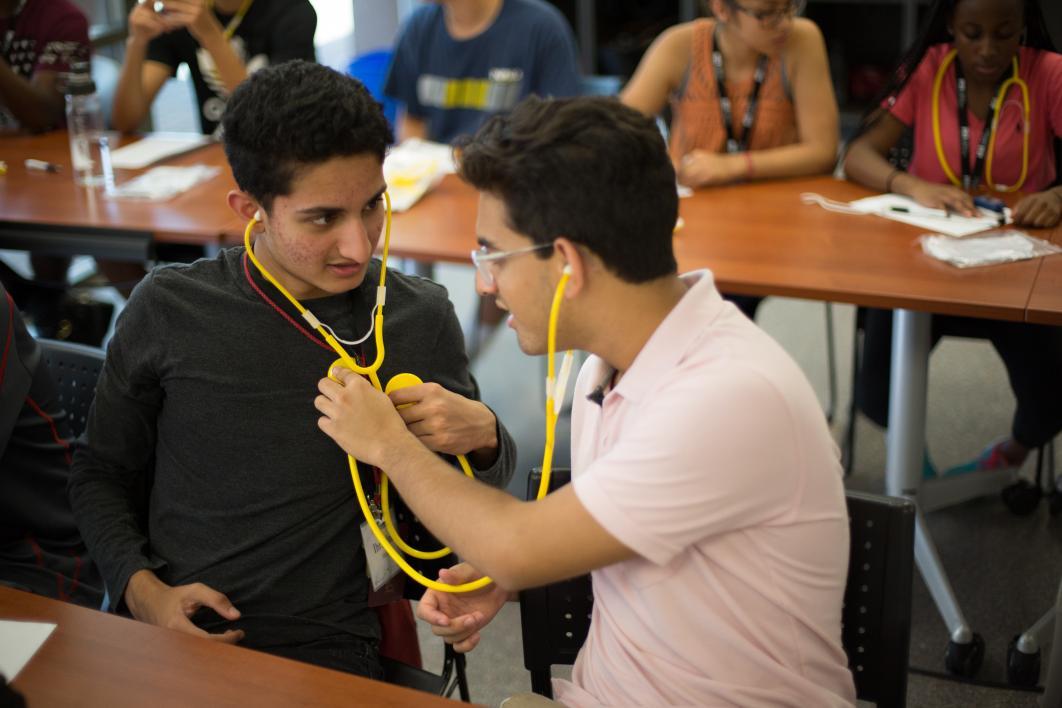 A Summer Health Institute student listens with a stethoscope to a fellow participant’s heartbeat.

The students were divided into four groups and were provided a case study that they investigated to identify one of four genetic disorders. They researched the disorders throughout the week and presented to a panel of professional judges during their final day.

"The Summer Health Institute at ASU provides a unique opportunity for rising high school seniors interested in fields within the health care arena to come together for one week and learn both as an individual and as a member of a team,” Mullens said. “This culminated with the creation of four exceptional college-level presentations on various health diseases; educating their peers and guests, an essential component for any health care professional and life-long learner."

ASU student Keana Nguyen also served as a camp counselor this year. When Nguyen was a high school senior three years ago, she was part of the Summer Health Institute’s first cohort.

“From a young age, I had always been interested in helping others and I wanted to be involved in the medical field," she said. "Going through this program, it intensified the drive in me to become a pediatrician even further. Doing all the activities and simulations and talking to people about their careers was so cool to me.”

“Going through the program a second time as a counselor made me realize how much impact the first time had on me as a high school student,” Nguyen said. “It’s a great way for high school students to get a first-hand look into the medical field before they start their college careers. Thanks to the Summer Health Institute, I believe that I have the right combination of skills, resources and knowledge to make it through my last two years as an undergrad and will continue on to graduate school with confidence.”

All costs associated with the 2017 Summer Health Institute were generously underwritten by Affiliated Dermatology, Creighton University School of Medicine, and Dignity Health.

The ASU School of Film, Dance and Theatre’s upcoming season offers something for everyone, from dance concerts and film screenings to cutting-edge theatre and collaborative productions between different art forms. A highlight of this year’s season is “Six Stories Tall” — a joint theater and dance production.“One of the goals of this collaboration is to explore interdisciplinary forms ...

The ASU School of Film, Dance and Theatre’s upcoming season offers something for everyone, from dance concerts and film screenings to cutting-edge theatre and collaborative productions between different art forms.

A highlight of this year’s season is “Six Stories Tall” — a joint theater and dance production. 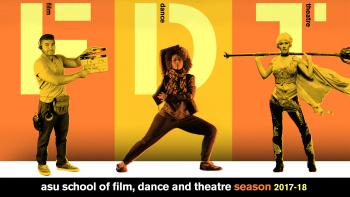 “One of the goals of this collaboration is to explore interdisciplinary forms that move beyond traditional approaches to art making,” said Mary Fitzgerald, assistant director of dance in the School of Film, Dance and Theatre.

“Six Stories Tall” is a vibrant collection of hip-hop fairy tales that celebrates urban culture through dance, music and storytelling.

“The innovative practices that have emerged from urban dance (movement and spoken word) can take the production in entirely new directions, perhaps helping to blur the boundaries between the disciplines of dance and theatre,” Fitzgerald said.

Guests interested in dance also have the chance to see several dance concerts this season, including Fall Forward!, a dance showcase featuring new works that explore an exciting range of aesthetics, movement styles and new media platforms that redefine dance and live performance. Emerging Artists and Transition Projects put a spotlight on student work, and SpringDanceFest highlights some of the best pieces from the year.

Two theatre productions in the fall, Jennifer Haley’s “The Nether” and Herberger Institute Professor Michael Rohd’s “The Compass,” tackle sci-fi stories set in the near future. “The Compass” puts a teenager in serious trouble after she consults a decision-making app that tells users what they would do in any situation. The audience acts as the jury in this inventive work that promises a different ending each night.

The last two theatre productions of the season are Pulitzer Prize-winning “The Flick” and “By the Way, Meet Vera Stark,” both set within the film industry. The first follows the lives of three employees at an old movie theatre, and the second tells the story of an African American actress in 1930s Hollywood.

Film lovers should also check out the two Senior Film Showcases, one at the end of each semester. Audiences have the opportunity to screen a series of films selected by ASU film faculty and industry professionals. Produced by graduating student filmmakers, these works include short films and documentaries as well as cinematography and editing reels.

Purchase tickets at filmdancetheatre.asu.edu/events. In addition to these events, the School of Film, Dance and Theatre also presents a range of other performances and events, from student productions and faculty work to workshops and performances by guest artists. Some of those include the Performance in the Borderlands series, Sol Motion series, Scholarship Series and FilmSpark events. Visit filmdancetheatre.asu.edu for more information.

The Nether
Written by Jennifer Haley
Directed by William Partlan
7:30 p.m. Oct. 13–14, 19–21; 2 p.m. Oct. 15, 22
Lyceum Theatre
Welcome to the Nether — a network of virtual reality realms. Plug in. Choose an identity. Indulge your every whim. In this near-future, sci-fi thriller, a young detective faces off against the creator of a virtual world that offers a disturbing brand of entertainment. “The Nether” is a tense interrogation of the darkest corners of the human imagination. (Contains unsettling content and mature themes.)

The Compass
Written and Directed by Michael Rohd
7:30 p.m. Nov. 11, 16–18; 2 p.m. Nov. 12, 19
Paul V. Galvin Playhouse
A teenager finds herself in serious trouble after she consults a decision-making app that tells users what they would do in any situation. Should she be held responsible? Did the app make her do it? Do her motivations matter? You’re the jury in this inventive, near-future work of science fiction.

The Flick
Written by Annie Baker
7:30 p.m. Feb. 16–17, 22–24; 2 p.m. Feb. 18, 25
Nelson Fine Arts Center 133
Winner of the 2014 Pulitzer Prize for Drama, “The Flick” peers behind the scenes of a rundown Massachusetts movie theatre where three employees struggle with friendship, heartbreak and betrayal. “The Flick” is a hilarious and moving parable for our times.

By the Way, Meet Vera Stark
Written by Lynn Nottage
7:30 p.m. April 13–14, 19–21; 2 p.m. April 15, 22
Lyceum Theatre
Vera Stark, an African-American maid and aspiring actress in 1930s Hollywood, sets out to land a role in a southern epic alongside her white starlet employer. Several years and several films later, Stark disappears, leaving scholars to debate her legacy, mine old interview footage for clues and examine her tangled relationships behind-the-scenes of the film that made her famous. Discover Stark’s story in this comedy that takes an irreverent look at race in Hollywood.

SpringDanceFest
7:30 p.m. April 20–21; 2 p.m. April 22
Paul V. Galvin Playhouse
SpringDanceFest showcases the breadth of creativity in the dance program, featuring student choreographers and performers in some of the most innovative work of the 2017-2018 season. The concert also includes pieces created by faculty, visiting artists and alumni.