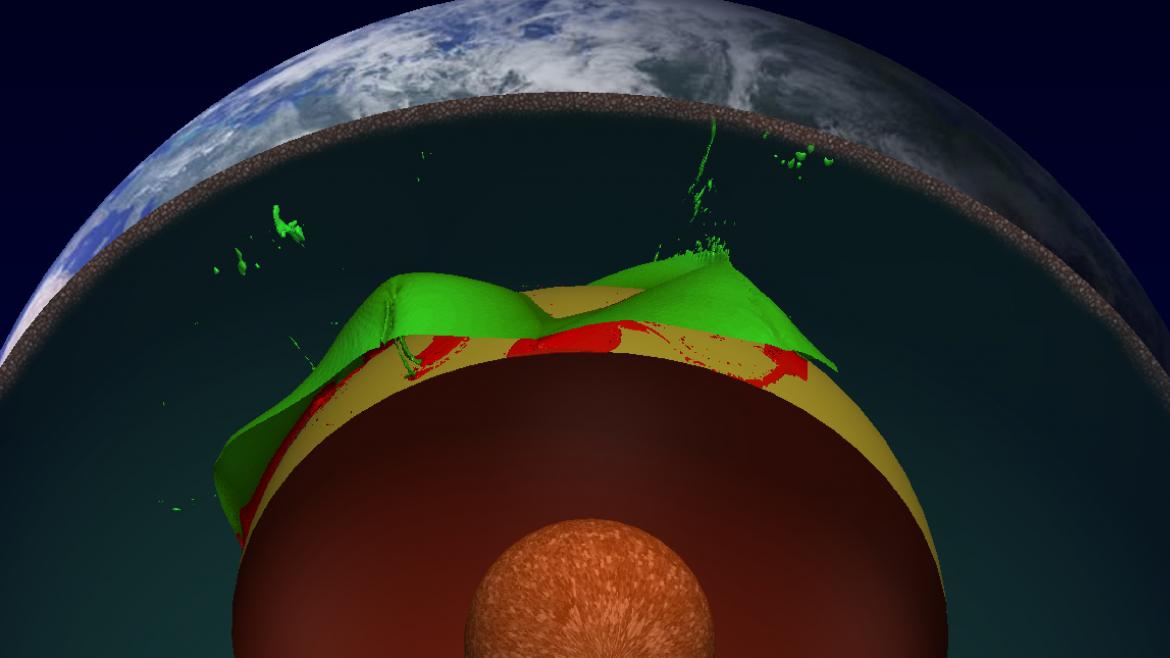 A team led by geoscientists from Arizona State University and Michigan State University has used computer modeling to explain how pockets of mushy rock accumulate at the boundary between Earth's core and mantle.

These pockets, lying roughly 2,900 kilometers (1,800 miles) below the surface, have been known for many years but previously lacked an explanation of how they formed.

The relatively small rock bodies are termed "ultra-low velocity zones" because seismic waves greatly slow down as they pass through them. Geoscientists have thought the zones are partially molten, yet the pockets are puzzling because many are observed in cooler regions of the deep mantle.

"These small regions have been assumed to be a partially molten version of the rock that surrounds them," said Mingming Li, lead author of the study, which was published today in the journal Nature Communications. "But their global distribution and large variations of density, shape and size suggest that they have a composition different from the mantle."

Li joined ASU's School of Earth and Space Exploration this month as an assistant professor. He was a graduate student of former ASU Associate Professor Allen McNamara, also a co-author on the paper; McNamara is now at Michigan State's Department of Earth and Environmental Sciences. The additional co-authors are ASU Professor Edward Garnero and his doctoral student Shule Yu.

“We don’t know what ultra-low velocity zones are,” said McNamara. “They are either hot, partially molten portions of otherwise normal mantle, or they are something else entirely, some other composition."

Because seismic evidence allows both possibilities, he said, "We decided to model mantle convection by computer to investigate whether their shapes and positions can answer the question.”

Do pockets relate to blobs?

About year ago, Garnero, McNamara and School of Earth and Space Exploration Associate Professor Dan Shim reported that two gigantic structures of rock deep in the Earth are likely made of something different from the rest of the mantle. They called the large structures "thermochemical piles," or more simply, blobs.

"While the origin and composition of these blobs are unknown," Garnero said at the time, "we suspect they hold important clues as to how the Earth was formed and how it works today."

What the big blobs are made of and how they formed still remain unknown, said Garnero. "But the new computer modeling explains how these ultra-low velocity zones are associated with the much bigger blobs."

Li said, "The ultra-low velocity zones are generally around tens of kilometers tall, and hundreds of kilometers wide or less. They are mostly located near the edges of the much larger blobs, but some of them are detected both inside the blobs and well away from them." 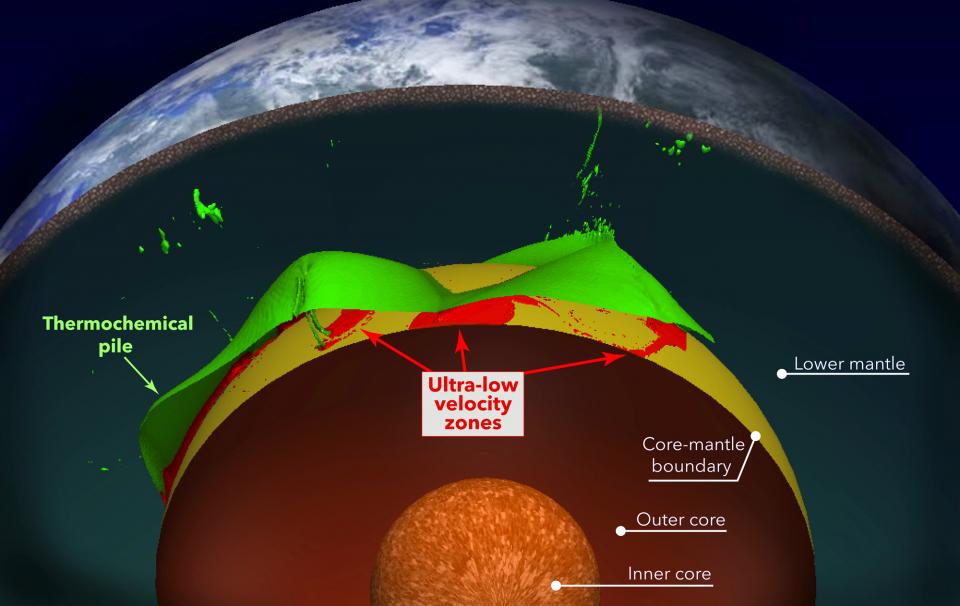 Tiny regions of compositionally distinct rock (red material, known as ultra-low velocity zones), collect at Earth’s core-mantle boundary (tan surface), nearly halfway to the center of our planet. Small accumulations of this distinct rock collect near the margins of large thermochemical piles (green) that reside at the base of Earth’s mantle. Image by Edward Garnero/ASU

"The margins of the thermochemical piles are where mantle flow patterns converge," McNamara said, "and therefore these areas provide a 'collection depot' for denser types of rock."

The force driving this movement is heat, which powers convection in the mantle.

Earth's mantle is made of hot rock, but it behaves more like fudge simmering slowly on a stove. In the mantle, heat comes both from radioactivity within the mantle rock and from the planet's core, the center of which is about as hot as the sun's surface. Mantle rock responds to this heat with a slow churning — convective — motion.

"The details are not completely clear," Li said. But the modeling shows that rocks of different composition respond to the convection in a way that gathers compositionally similar materials together. This moves the small pockets of chemically distinct rocks to the edges of the hotter blobs above the core-mantle boundary.

"We ran 3-D high-resolution computer modeling, and we developed a method to track the movement of both the small pockets of ultra-low velocity zones and the much larger thermochemical piles." Li explained. "This allowed us to study how the small pockets move around and how their locations can be related to their origin."

McNamara said, "What was new about our approach — and also computationally challenging — was that the modeling simultaneously took into account vastly different scales of motion." These ranged from global mantle-scale convection patterns, to the large thermochemical piles in the lower mantle, and down to the very small-scale pockets of ultra-low velocity zone at the bottom.

"What we ultimately found," he said, "is that if ultra-low velocity zones are caused by melting of otherwise normal mantle, they should be located well inside of the thermochemical piles, where mantle temperatures are the hottest."

But he added, "If the ultra-low velocity pockets of rock have a composition different from the ordinary mantle rock, then mantle convection would continually carry them to the edges of piles where they collect.

"This is consistent with what we see in the seismic observations.”

Where do the different materials in the deep mantle come from in the first place?

Garnero said that where the rock in ultra-low velocity zones originally came from is currently unsolved. But the process of collecting this material into small pockets of rock is clear.

"You can have various mechanisms, such as plate tectonics, that push rock of differing chemistries into the deepest mantle anywhere on Earth," he said.

"But once these different rocks have gone down deep, convection wins and sweeps them to the hot regions, namely, where the continental-sized thermochemical piles reside."

Arizona State University’s alumni base, now 496,000 strong, is filled with Sun Devils who have used their ASU education to help others, enrich the community and make the world a better place. The community is officially invited to help the ASU Alumni Association locate candidates for three upcoming award programs, which will honor graduates of the institution who have made significant contribut...

Arizona State University’s alumni base, now 496,000 strong, is filled with Sun Devils who have used their ASU education to help others, enrich the community and make the world a better place. The community is officially invited to help the ASU Alumni Association locate candidates for three upcoming award programs, which will honor graduates of the institution who have made significant contributions in a variety of areas of achievement.

Nominees are currently being sought for the following awards: 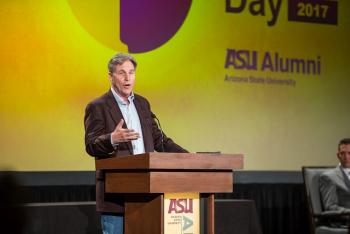 This year, the awards will be presented at halftime of the ASU-USC Homecoming game on Oct 28.

The Alumni Association's Founders' Day Awards Dinner is one of the organization's signature events. Honorees at this event include faculty, staff, alumni and philanthropists whose contributions to the university and the community at large exemplify the pioneering spirit of the founders of the institution.

This event highlights ASU’s incredible history of entrepreneurial leadership and celebrates the achievements of Sun Devil-owned and Sun Devil-led businesses across the country.

The deadline for nominations for all three award programs is 5 p.m. Sept. 15.

For additional information on these awards, to make a nomination, as well as learn about the Alumni Association’s other community awards, visit https://alumni.asu.edu/services/community-awards.