ASU researcher talks about worker turnover and production in colonies, brutal places that won't ever make a 'best spots to work' list

Imagine working for the harshest corporation in the world.

Naturally, they want to maximize production and growth. This is done by investing in lots of low-wage employees, rather than fewer well-paid workers. When production needs to be ramped up, more workers are brought on like holiday employees at a warehouse.

When they’re of a certain age, they’re sent out to die working, with no further help from corporate. All of this produces a large, thriving company.

Ant colonies will never make the list of best places to work, but those are some of the ways they grow successfully. A new study by Arizona State University scientists revealed what makes a thriving colony.

“People will be interested to know there’s a lot more going on below the surface here in terms of organization and similarity to us than you might expect just by looking at ants scurrying around on the surface,” said lead author Christina Kwapich.

The study took a year and a half, and it involved counting almost 300,000 individual ants. The researchers were interested in how colonies performed in terms of worker loss and production, and how that affected colony reproduction.

“We went out and measured how many foragers, or ants that came out to collect food, died in a single year and then how many of those workers a colony was able to replace,” said Kwapich, a postdoctoral researcher in the School of Life Sciences at ASU. “We did that because big colonies produce more new queens and males than small colonies, and we wanted to see why some colonies are better or worse.”

Ants bring out their dead. Two and a half acres of colonies produce enough dead ants to weigh as much as a house cat or a newborn baby.

The colony, which is the entire community of queens, workers, larvae and so on, is like a factory. There’s a division of labor, like Henry Ford’s production line. As ants age, they change jobs. The colony needs to allocate labor in an adaptive way. 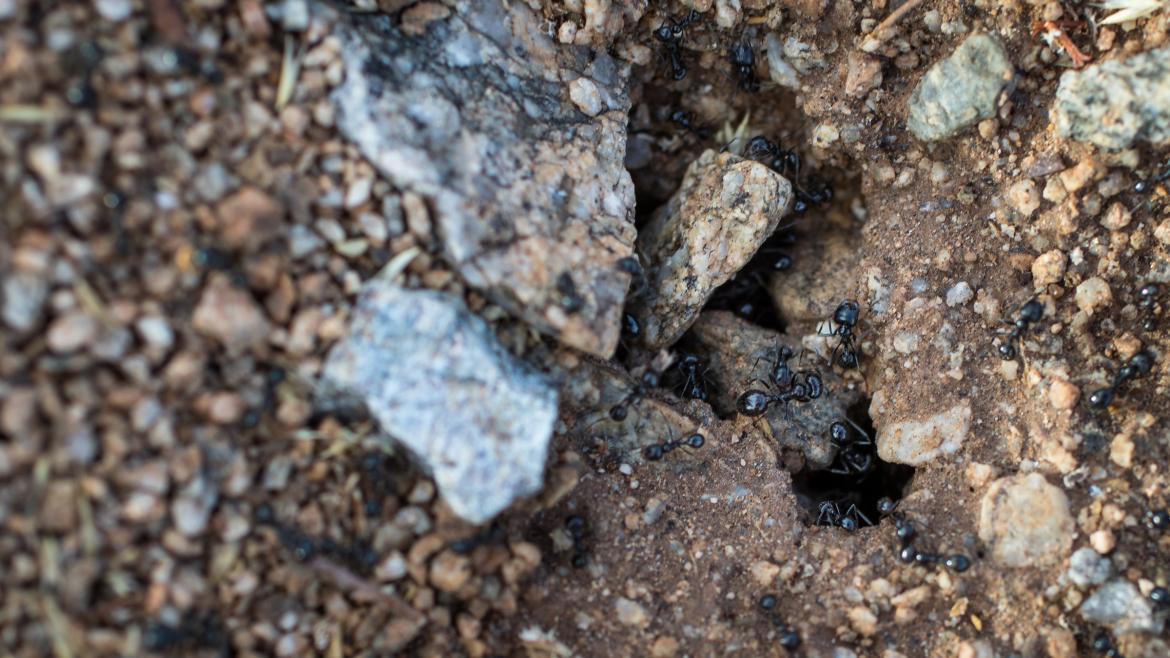 Christina Kwapich says ant colonies
around South Mountain Park/Preserve
can be 20-30 feet deep or more,
with the queen residing at the bottom and
food stores in the midsection.

“In one of our other studies, we showed that the proportions of colonies of ants who do certain jobs change throughout the year in a way that facilitates the production of new queens and winged males and workers at different times,” Kwapich said. “They’re maximizing production by changing the labor ratios in the colony.”

“When the ant comes to the surface and begins collecting food, that’s at the very end of her life,” Kwapich said. “She’ll do that for about 18 days before she dies. The ants had the amount of investment that is corresponding to the life they’ll have on the surface. The colony doesn’t keep investing in them once they start doing this job. They don’t waste the fat young ones; they stay deep in the nest.”

Myrmecologists — entomologists who specialize in ants — know that if a colony has multiple queens, there’s going to be more worker production. That wasn’t the case with desert seed-harvesting ants, the subject of the study.

“What we actually found was that all the colonies had just a single queen, and what differed was the number of fathers that occurred in each colony,” Kwapich said. “We found that colonies with fewer fathers did better than colonies with multiple fathers. What this means is that during the mating flight, a queen either mated with more or less males before starting her colony and letting it grow into this creature with a division of labor and all sorts of interactive parts.”

The paper will be released in the August issue of Behavioral Ecology and Sociobiology. Kwapich’s co-authors were Bert Hölldobler and former ASU faculty member Juergen Gadau.

Incidentally, Kwapich was inspired to go into myrmecology by reading Hölldobler’s Pulitzer Prize-winning book “The Ants” when she was a kid.

Top photo: ASU entomology postdoctoral researcher Christina Kwapich takes a sample of ants from a colony in a wash in the South Mountain Park/Preserve in Phoenix on July 18. Her recent research has focused on counting the annual turnover of worker ants within colonies. Photo by Charlie Leight/ASU Now 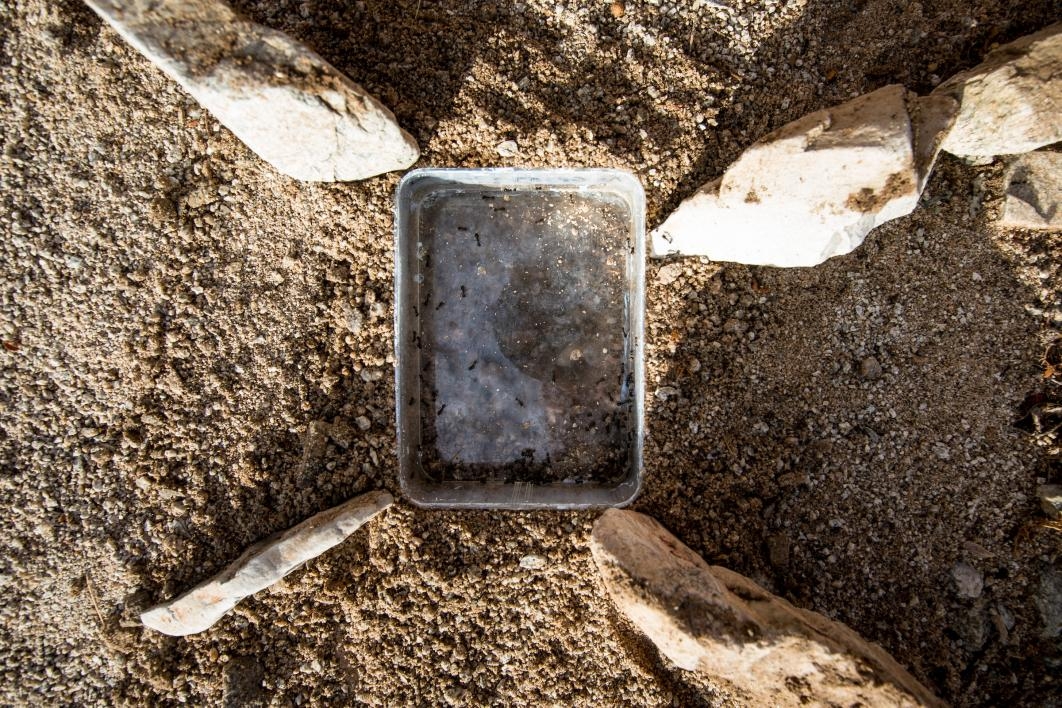 How do you trap and count ants? Kwapich digs a small hole in the middle of a foraging line, inserts a clear plastic sandwich box, then covers it with a shallow layer of sand and dirt. She arranges rocks along the foraging line to direct the ants towards it, then waits for the line to restablish itself.

“I like to direct them with rocks,” she said. “It’s real preschool stuff.”

It doesn’t take long. Soon enough (about 12 minutes), the black line of workers is traveling atop the sandwich box. Kwapich takes the top off. Now it’s a pitfall trap, the type of thing used to catch tigers in Burma before the Second World War.

“They just slip right in,” she said. “You can actually catch thousands of ants this way.” 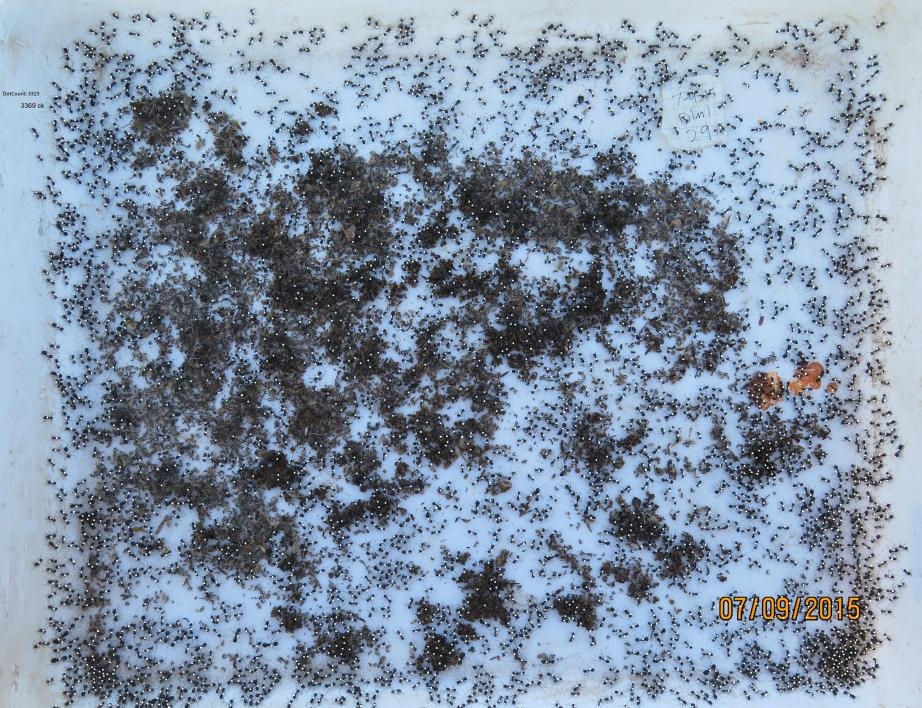 Once they’re caught, Kwapich paints them using fluorescent paint and a perfume sprayer. She shakes them into a geological sieve to get all the gravel out, them dumps them into a white plastic tray. She will photograph the tray and count the ants in the photograph by marking the photo with dots. 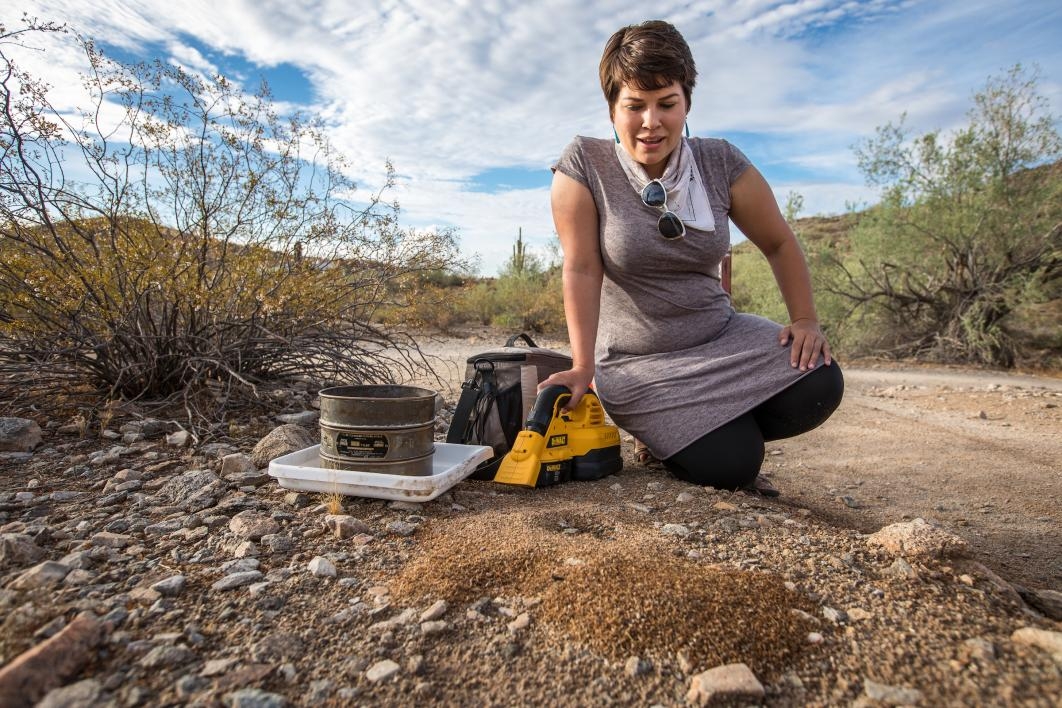 Twenty-four hours later, Kwapich returns to the same colony and repeats the process. It’s called the mark-and-recapture method, commonly used in ecology to estimate an animal population's size, usually when counting all the individuals in a population is impossible. 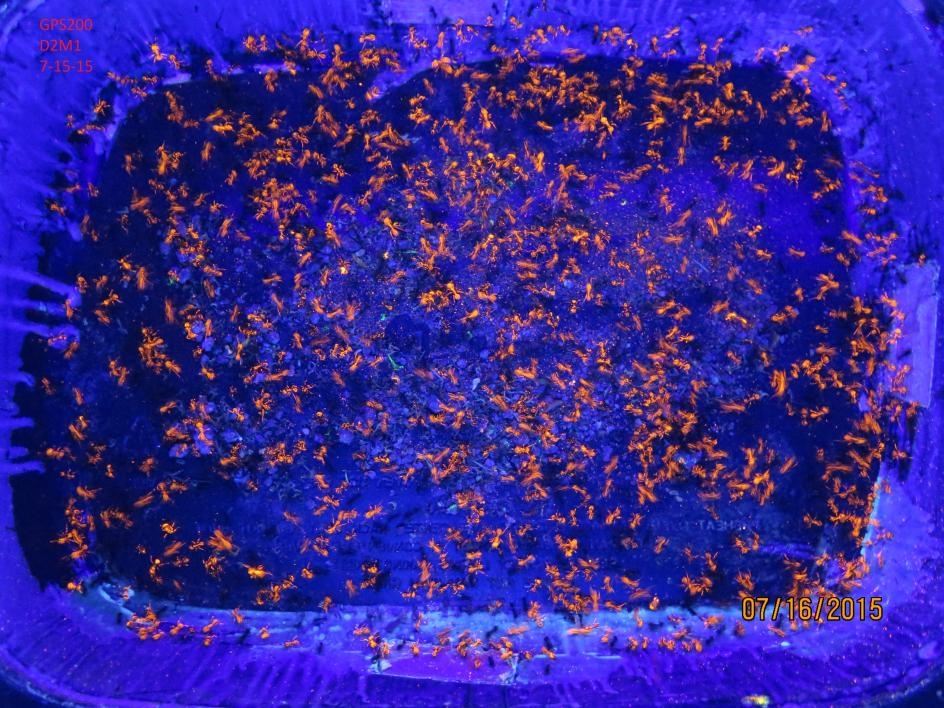 Study: Female doctors less likely to be referred to by title

The title of doctor, whether medical or academic, carries a certain weight. After all, you don’t become one without a great deal of time, dedication and expertise.ASU Professor Patricia Friedrich and her husband, ASU Associate Professor Luiz Mesquita, are both doctors. Yet when they attended professional events together, she noticed an odd discrepancy.“People would refer to him as ‘doctor’... 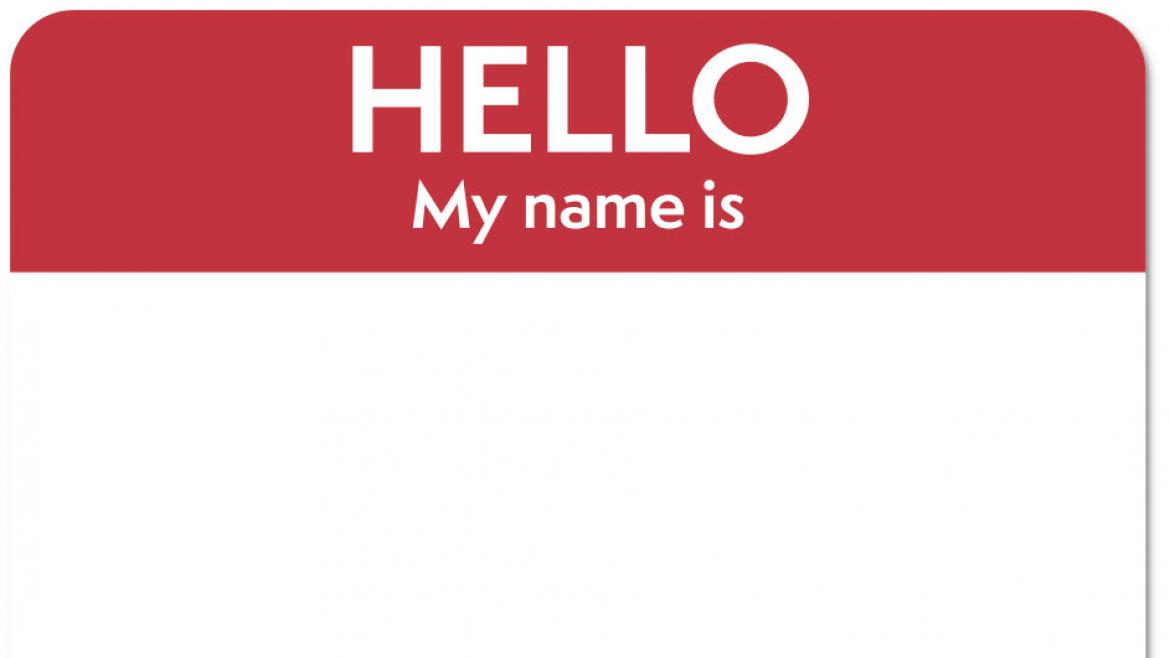 Study: Female doctors less likely to be referred to by title

The title of doctor, whether medical or academic, carries a certain weight. After all, you don’t become one without a great deal of time, dedication and expertise.

ASU Professor Patricia Friedrich and her husband, ASU Associate Professor Luiz Mesquita, are both doctors. Yet when they attended professional events together, she noticed an odd discrepancy.

“People would refer to him as ‘doctor’ and, in the same breath, refer to me as ‘Patty,’” she said. As a sociolinguistSociolinguistics is the descriptive study of the effect of any and all aspects of society, including cultural norms, expectations and context, on the way language is used and the effects of language use on society., it made her wonder.

Unbeknownst to her at the time, the same thing had other female doctors scratching their heads; in particular, doctors Anita Mayer and Julia Files from Mayo Clinic Arizona, who recruited Friedrich and her linguistic skills to look further into it. The research team, which also included two of Friedrich’s students, Trevor Duston and Ryan Melikian, published a study on the phenomenon recently, which found that female doctors introduced by men at formal gatherings were less likely to be referred to by their professional title than were male doctors introduced by men.

The researchers analyzed video footage of 321 speaker introductions at two separate formal medical gatherings. Various data were codified by pairs of researchers, one female and one male, to ensure as little bias as possible.

They found that regardless of the speaker’s gender, female introducers were 96 percent more likely to use professional titles compared with 66 percent of male introducers. This is consistent with researchers’ expectations based on past studies that have found that women tend to use a more formal register across the board compared with men, Friedrich said.

That’s statistically significant, Friedrich said, and was something female researchers on the team had anticipated based on personal experience.

“We wanted to see if the differences that doctors who happen to be women were noticing in their own professional lives could be quantified,” said Friedrich, who is in the New College of Interdisciplinary Arts and Sciences. “And that is what we were able to confirm.”

One of the things she and the rest of the research team agree on is that the discrepancy is not necessarily intentional. According to Friedrich, one male doctor reported that addressing female doctors by their first name instead of their professional title was an attempt to convey that they were equals.

Another reason behind the discrepancy could be that forms of address for men vs. women are so strongly socially embedded in us that we don’t realize we’re differentiating, Friedrich added.

Either way, the possible repercussions are real.

“Some people say, what’s the big deal? It’s such a minor thing, why should anybody care?” she said. “As a social linguist, my belief is that little things in language are often indicative of social practices that usually do have ramifications.”

Those ramifications can include roadblocks to professional development, being perceived as having less authority and being taken less seriously in one’s profession.

And it happens across multiple professions in which titles are common, such as academia, law and among members of the clergy, Friedrich said.

Since the results of the study were published, one of the formal medical gatherings from which the research team gathered data has changed its standard of introductions, advising attendees to include formal titles in introductions of all speakers.

“I think this is one of those linguistic situations where we called attention to something that might not be intentional but now we have the ability to try and change it by initiating practices that are more even across genders,” Friedrich said. “Sometimes language changes because society changes, and sometimes society changes because language changes.”

Friedrich and the team were pleased that the study proved to be so productive and are motivated by the results to build on it in the future, considering, as she said, that “it’s applicable to so many realms.”