Fernanda Santos, an award-winning author and Southwest correspondent for The New York Times, is joining the Walter Cronkite School of Journalism and Mass Communication as a Southwest Borderlands Initiative Professor, Arizona State University has announced.

Santos, who covers Arizona and New Mexico for the Times, has reported extensively on border and immigration issues as well as wildfires in the Southwest. Her recent book, “The Fire Line: The Story of the Granite Mountain Hotshots,” covered the deadliest wildfire in Arizona history. 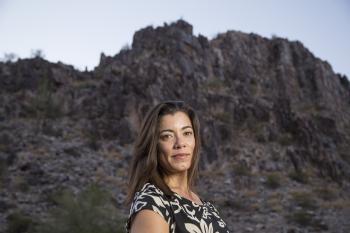 Santos, who starts Aug. 16, will teach short- and long-form narrative journalism to undergraduate and graduate students. She will hold the rank of professor of practice.

“I’m a firm believer in sharing my knowledge, and I can think of no better way to do that than to work with the next generation of journalists at Cronkite, a school that believes in diversity of culture, background and point of view — diversity in its true form,” Santos said. “This is an amazing opportunity to help students become better writers and to mentor them.”

Since joining the Times in 2005, Santos has covered New York City’s public school system, Mayor Michael Bloomberg’s City Hall and the New York borough of Queens as well as rural and suburban communities in the state of New York. Her story on the first year of freedom for a wrongfully convicted man won awards from the Associated Press Media Editors and the Society of Silurians.

As Phoenix bureau chief, she has reported on the ongoing issues surrounding President Donald Trump’s plan to construct a wall along the U.S.-Mexico border as well as on a Frank Lloyd Wright-designed home in Phoenix that was once targeted for demolition.

“Fernanda’s stories for the Times have brought national and international attention to the important issues of the Southwest through skilled reporting and powerful narrative,” said Cronkite School Dean Christopher Callahan. “We are thrilled she will be sharing her passion for storytelling with our students and are excited for her to be an integral part of our school.”

Santos, who speaks four languages — English, Portuguese, Spanish and French — got her start in journalism in her home country of Brazil, where she found a passion for storytelling in Rio de Janeiro. There, she said she witnessed “violence, inequality and immeasurable hope.”

In 1998, she came to the U.S. and started reporting for newspapers in Massachusetts. At the Eagle-Tribune, in Lawrence, Massachusetts, she was part of the reporting team that won the Society of Professional Journalists’ Sigma Delta Chi Award for Public Service for a multipart series on racial relations in New England.

She went on to work at the New York Daily News and People Magazine before joining The New York Times.

Santos also was a fellow at the International Reporting Project, hosted by Johns Hopkins University’s Paul H. Nitze School of Advanced International Studies in Washington, D.C., in 2005. For the fellowship, she traveled to Colombia to explore the reasons behind a steep decline in the rate of violent crimes in Bogotá.

“I've been a journalist for 20 years, 12 of those at The New York Times, where I learned from some of the best editors and reporters in the business,” she said. “This was the perfect time in my career to step away from daily newspapers. Cronkite gave me a home when I took a leave of absence from The Times to write a book about the deadly wildfire of 2013. I’m honored to be joining the full-time faculty at the school, and I can't wait to bring my passion and skills to the classroom.”

Published in 2016, “The Fire Line” provides a narrative of the Yarnell Hill Fire in Arizona, which killed 19 firefighters. The book received the Western Writers of America 2017 Spur Award for Best First Nonfiction Book.

At the Cronkite School, Santos will be part of the ASU Southwest Borderlands Initiative. The borderlands initiative, created in 2001 to enhance research and teaching focused on the Southwest and the U.S.-Mexico border, has more than two dozen faculty members across a wide array of disciplines.

Santos will join Cronkite’s Southwest Borderlands Professor Rick Rodriguez, the former executive editor of The Sacramento Bee and the first Latino president of the American Society of News Editors. Santos, Rodriguez and Vanessa Ruiz, a former lead anchor on 12 News Phoenix and an award-winning bilingual correspondent who also starts at Cronkite next month, are part of a growing cadre of faculty members specializing in coverage of the border and Latino issues.

She holds a master’s degree in journalism from Boston University and a bachelor’s degree in communications and sociology from Pontifícia Universidade Católica in Rio de Janeiro.

“Joining Cronkite is truly an honor,” Santos said. “This is an incredible opportunity to be part of a stellar faculty in one of the best journalism schools in the country.”

Editor's note: This story is being highlighted in ASU Now's year in review. To read more top stories from 2017, click here.Last fall the nation’s most innovative university and the world leader in patient care and research formalized a dynamic relationship of more than a decade with the announcement of the Mayo Clinic and Arizona State University Alliance for Health Care, a collaboration aimed a... 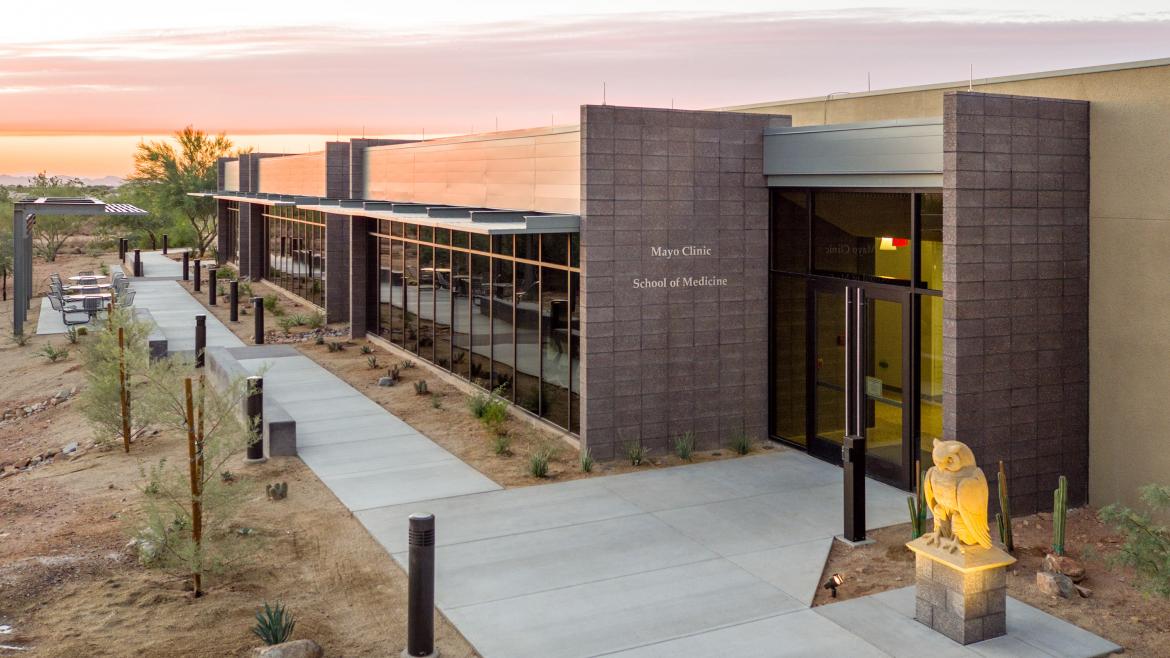 Medical school a key next step for Mayo Clinic and ASU Alliance for Health Care.
July 18, 2017

Last fall the nation’s most innovative university and the world leader in patient care and research formalized a dynamic relationship of more than a decade with the announcement of the Mayo Clinic and Arizona State University Alliance for Health Care, a collaboration aimed at transforming medical education and health care in the U.S.

This week the alliance will experience an important next step when Mayo Clinic School of Medicine welcomes its first cohort of 50 students in Scottsdale. The inaugural class was chosen from more than 3,000 applicants. By 2020, the school’s four-year medical training program will mushroom to 200 students — doubling the overall size of Mayo’s national medical school to more than 400 students across campuses at Mayo Clinic sites in Rochester, Minnesota, and Jacksonville, Florida, along with Arizona.

The curriculum that will guide these future health care providers expands upon a traditional medical education. It will include courses that focus on the science of health care deliveryThe jointly developed courses will focus on how patients receive care to improve quality of the patient experience, outcomes and cost jointly developed by experts at both the Mayo Clinic and ASU under the alliance. The courses in this nascent field will be taught by ASU and Mayo Clinic faculty, many of whom currently conduct joint research.

Michele Halyard, who specializes in radiation oncology at the Mayo Clinic, will serve as dean of the new school, which is ranked in the top 20 for research by U.S News & World Report. She said both institutions bring complementary skills and abilities to this latest venture in curricular advancement.

“Mayo has a long history of excellence in patient care through research and education, and ASU is a top-tier research university,” she said. “Both are committed to excellence, innovation, advancing learning and collaborating to achieve those goals.”

The expansion of Mayo medical school to the Arizona campus and the forward-thinking courses further solidify each institution’s national reputation and commitment to the future of health care and transformative education.

“The students of this school’s inaugural class are highly talented,” Halyard said, “and I’m hoping that ultimately, this will lead to them one day coming back to Arizona to practice medicine here.”

The curriculum for the school was designed with an eye to the future. The fields of science and medicine are changing at a rapid clip, Halyard said, so health care education needs to evolve with them, while still maintaining an emphasis on the quality and value of patient care.

With that in mind, experts at the Mayo Clinic defined six core competencies that physicians of the future will need: person-centered care; population-centered care; high-value care; team-based care; health policy, economics and technology; and leadership. To that, experts from ASU’s first-in-the-nation, School of Health Care Delivery, added their knowledge in the area of the science of health care delivery and experience in designing online courses through ASU’s EdPlus development unit.

“Mayo defined the core competencies and care standards, and ASU helped us put the meat on the bones,” Halyard said.

“What we prioritized and further learned with ASU has become the foundation for whole new courses in the science of health care delivery, or as the American Medical Association calls it, ‘health systems science,’ ” said Daniel Johnson, one of the Mayo Clinic Arizona physician leaders developing the new SHCD curriculum. In fact, this program emerged from ASU’s School of Health Care Delivery, which launched in 2013 and academically aligned with the Mayo Clinic Robert D. and Patricia E. Kern Center for the Science of Health Care Delivery.

Students at all of Mayo’s campuses will receive a medical degree from Mayo Clinic as well as a certificate in the science of health care delivery, jointly conferred by ASU and Mayo Clinic. They also have the option to pursue a master’s degree in the science of health care delivery from ASU (as three students at the Rochester school have already committed to) by taking an additional 12 credit hours, which are also available online.

Mayo medical students also have the option of pursuing a dual master’s degree in a variety of disciplines from ASU. These include health informatics (part of the department of biomedical informatics co-located at the Mayo Clinic Scottsdale campus), biomedical diagnostics, mass communications, business administration and law.

In addition to the newly formed programs, ASU and Mayo have a rich history of collaboration that includes a Cronkite speaker series and fellowship program, as well as Poesía del Sol (Poetry of the Sun), an ASU Project Humanities collaboration with the Mayo Clinic Center for Humanities in Medicine and the English Department’s Creative Writing Program. Poesía del Sol pairs ASU master’s students with palliative care patients at the Mayo Clinic Hospital in Phoenix. The students interview the patients and their families, then create poems that they present to them as a gift and celebration of life.

“This expansion of the Mayo medical school is a historic milestone in our relationship with Mayo,” said Mark Searle, ASU executive vice president and university provost. “This adds a new dimension to all the great things we’re doing together.”