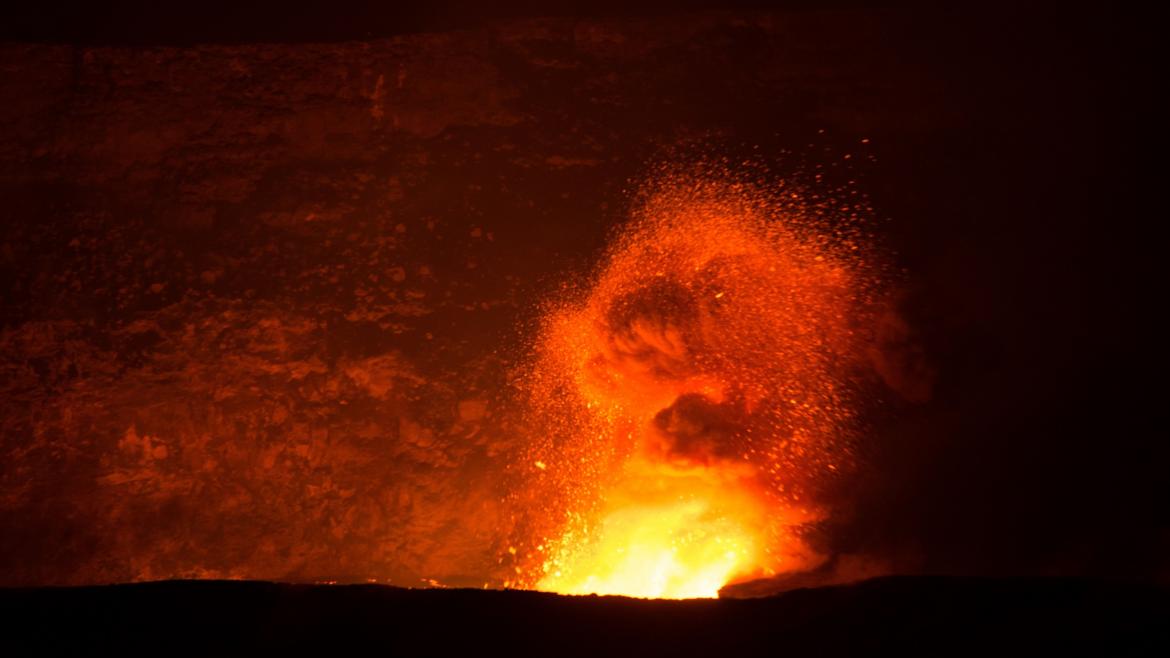 Supported by an NSF early-career grant, Christy Till embarks on 5-year study to take some of the mystery out of eruptions

From Italy to Iceland to Indonesia, volcanoes have been worshipped and venerated for centuries, seen as the abode of angry and capricious gods mollified only by fish, pigs, and holy relics.

It’s human nature to ascribe divinity to mysterious natural processes, and to want to make them go away with a chicken or a lock of hair. No one, even scientists, really knows what the signs of an imminent eruption look like.

On Savo, an island in the Solomon Island archipelago, the local volcano has erupted at least three times in recorded history. The 3,000 inhabitants keep oral traditions of history. They know that when a major eruption is imminent, the crater fills with water, earthquakes and tsunamis occur, and vegetation dies off.

An Arizona State University assistant professor is embarking on a five-year study to take some of the mystery out of volcano eruptions by identifying coming eruptions.

Christy Till, an igneous petrologist in the School of Earth and Space Exploration, has been awarded a grant from the National Science Foundation for about $575,000.

“We’re even a little further behind in volcano studies,” Till said. “We don’t even have early warning systems yet.”

What causes bodies of magma to form? What causes them to erupt? Scientists have notions of what those processes are, but they don’t know where they fit in the time frame of an eruption. Till will search for markers in her study.

“We’re still trying to understand the science,” she said. “What are the events that head up to the eruption, so we can look for them on the surface. ... We have all those clues about how to look at volcanoes, but we don’t know how to decode them very well yet.”

Till will study past eruptions as clues. 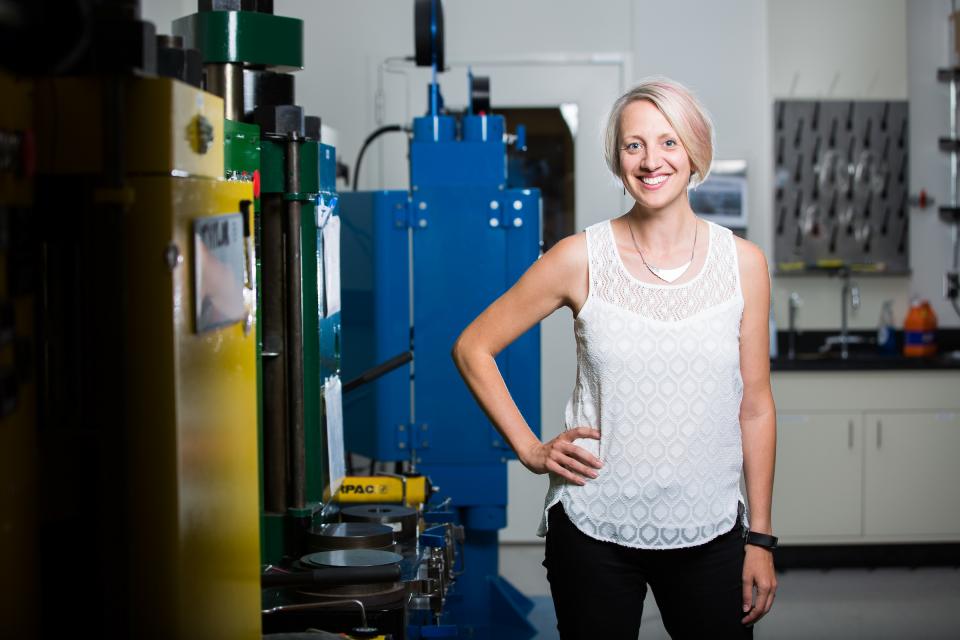 ASU Assistant Professor Christy Till (shown in her lab in Tempe on June 8) is embarking on a five-year study to take some of the mystery out of volcano eruptions, supported by a grant from the National Science Foundation's Early Career Development (CAREER) Program. Photo by Deanna Dent/ASU Now

When magma erupts, it’s a combination of hot liquid, solid rock incorporated into the liquid, gases and crystals that formed when the magma was in the subsurface and cooled down.

“These crystals are time capsules of information and they tell us about the composition of the magma they were growing from, the temperature of the magma,” Till said. “If there was a sudden event in the magma chamber, they recorded that and we can use that to construct the life history of the magma leading up to its eruption when the crystal was erupted onto the surface.”

Volcanoes are somewhat like people. Their stories vary throughout their lives, and they are very different from each other.

“They’re not all the same,” Till said. “Trying to understand why those variations exist and what they mean about the likelihood of an eruption is something we spend a lot of time thinking about.”

The grant will also be used for an education component in science communication.

The NSF Faculty Early Career Development (CAREER) Program offers awards in support of early-career faculty who have the potential to serve as academic role models in research and education and to lead advances in the mission of their department or organization.

The awards are not aimed at one specific question.

“They’re more of a vision of a direction for you to take your research for the next five years,” Till said. “You’re defining a body of work you’re going to do, not just one project.”

The Sun Devils women’s golf team had a lot of ups and downs this season, according to Head Coach Missy Farr-Kaye. But they ended the year at the very top: Arizona State University won the national championship for the eighth time in the program’s history — the most of any NCAA Division I program.It was Farr-Kaye’s third NCAA title. She won the first while a senior on the ASU golf team, in ... 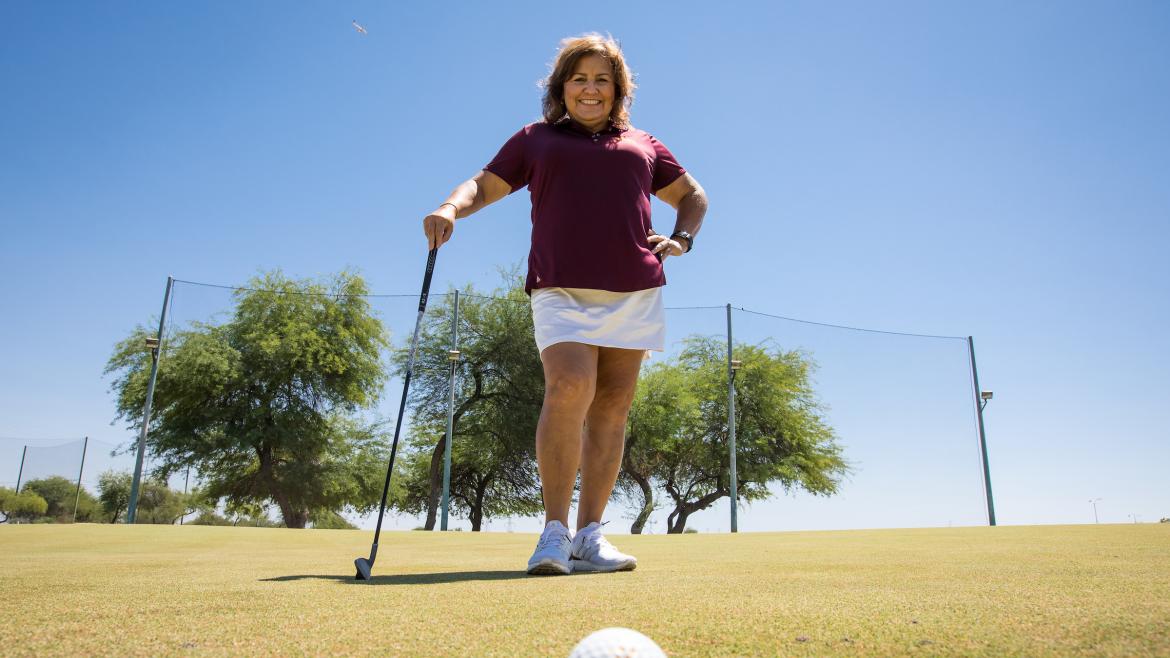 The Sun Devils women’s golf team had a lot of ups and downs this season, according to Head Coach Missy Farr-Kaye. But they ended the year at the very top: Arizona State University won the national championship for the eighth time in the program’s history — the most of any NCAA Division I program.

The golf season runs from September to May, and Farr-Kaye started the season last fall without an assistant coach, which, she said, was a blessing in disguise.

“It worked out well to have a couple of months by myself because I really had a chance to connect with my players. When you’re the only resource, they come to you for everything,” she said. In November, Michelle Estill, a former professional golfer and a teammate of Farr-Kaye’s at ASU in the 1980s, was hired as the assistant coach.

Besides the team victory, Sun Devil Monica VaughnVaughn was named winner of the Honda Award, the Pac-12 Tom Hansen Medal of Honor and the Pac-12 Women's Golfer of the Year. won the NCAA individual title, two weeks after graduating with a degree in communications.

Vaughn said the key to Farr-Kaye’s coaching success is that she’s more than coach. 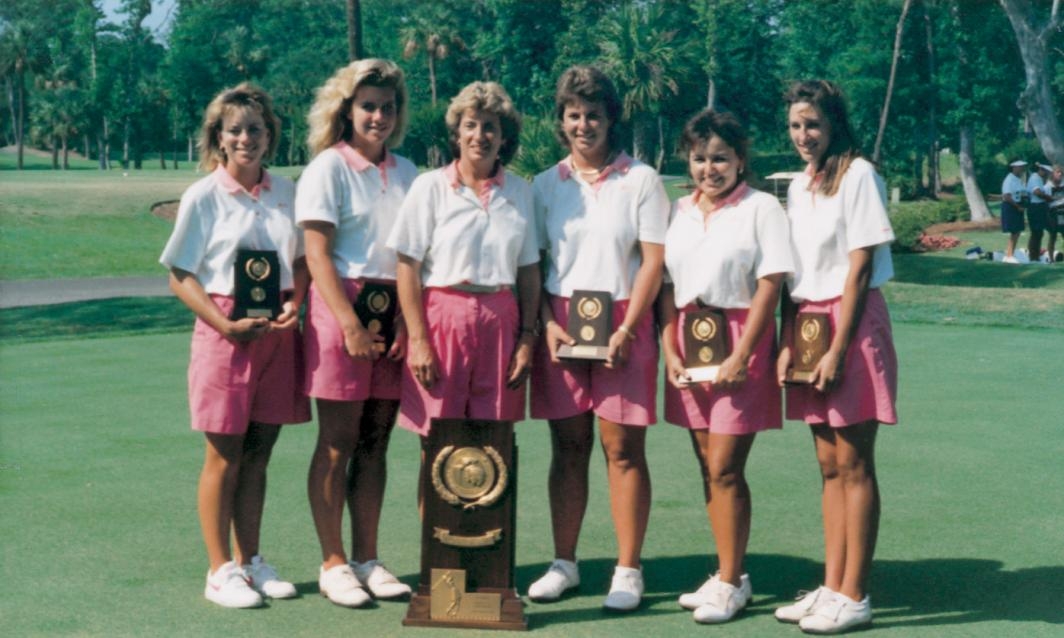 Missy Farr-Kaye won her first NCAA golf title while she was a senior on the Sun Devils women's golf team in 1990. She's second from the right. 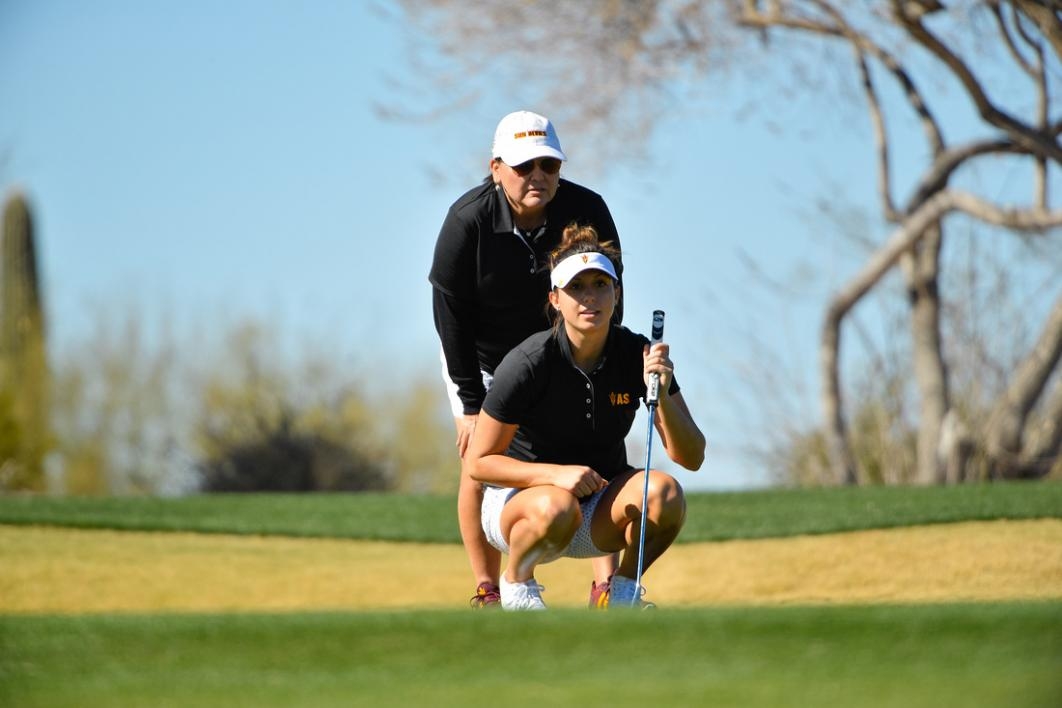 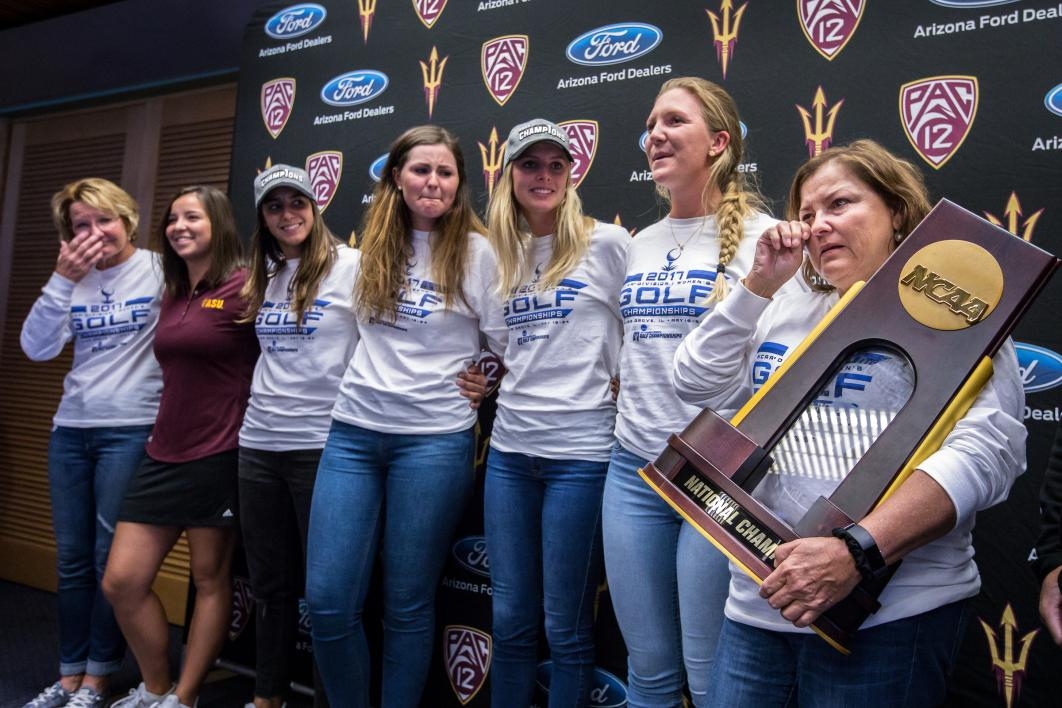 Head Coach Missy Farr-Kaye wipes away a tear while addressing family, friends and the media at the celebration in Sun Angel Clubhouse at the ASU Karsten Golf Course on May 25, the day after the Sun Devils won the championship. 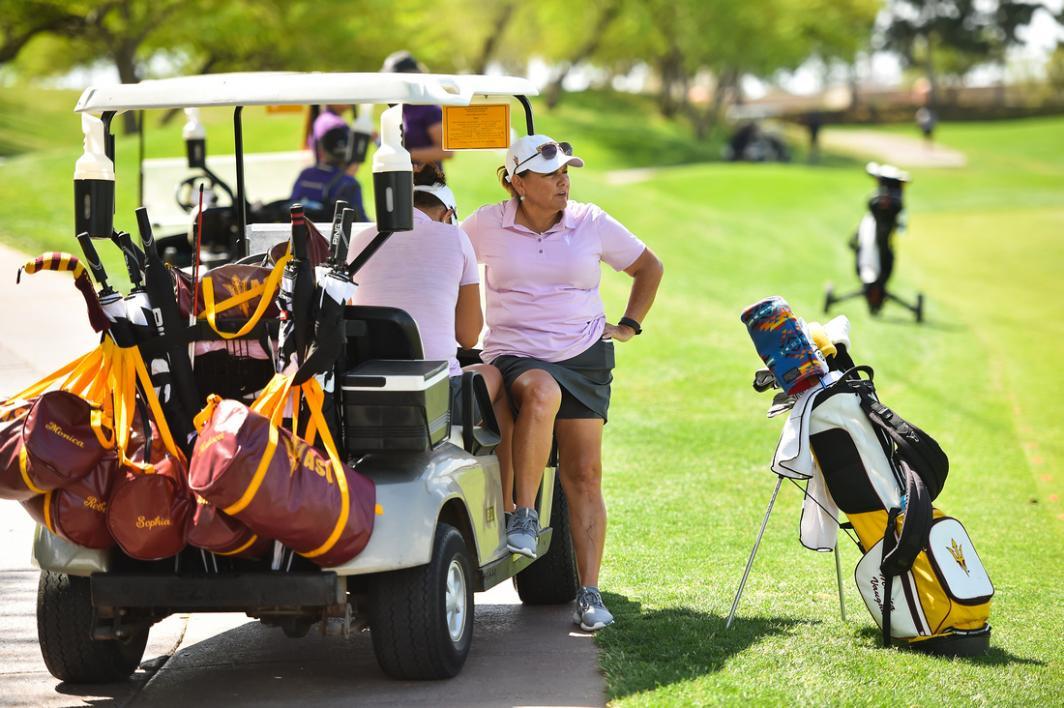 Missy Farr-Kaye led the women's golf team to the national title in only her second year as head coach.

“She’s a mom away from home, and she’s a mentor. She’s a doctor when she needs to be,” she said.

“That’s helped to create such a great bond. She lets us know that she cares more how we are as people than how we are as golfers.”

Farr-Kaye talked to ASU Now about how she worked throughout the season to lead the team to the pinnacle of success.

1. She found inspiration in different places.

“I realized the most important thing we needed to do was to be a team that was mentally strong and gritty.

“I love to watch what the good coaches are doing, and I spend a lot of time reading. I watched a TED Talk on grit by Angela Duckworth, who also wrote a book about it [‘Grit: The Power of Passion and Perseverance’] that’s on my nightstand and that I keep highlighting.

“I started following Jon Gordon, who mentors many coaches and wrote ‘The Power of Positive Leadership.’ ”

2. She asked for a commitment to the very end.

“In January, we had a team retreat. We brainstormed how we wanted the entire season to look up until the last day. We had to be all in until May 24, the last day of the finals.

“It’s easy to get a little burnt out at the end of the season. They miss their families. We had Monica as a senior, with the pressure of graduating and ‘what will I do next?’

3. She personalized her coaching.

“It’s really important to know the individual players. What I say to one player is not going to resonate with the next one.

“You have to have those relationships where you know who needs a tougher love — ‘Come on. What are you doing?’ And that the other needs to hear, ‘You’re fine. It’s all right.’

“It takes a lot of time and intuition to learn what makes each of them tick.”

4. She built up the players' mental toughness.

“We struggled at conference. We had a bad first day in our minds, and the girls were devastated. I told them we had a fantastic year. We won our home tournament for the first time in 10 years. We’re not going to let one bad day ruin it. Let’s take apart what we need to. Let’s be smart about his. [The team won the PING/ASU Invitational by 20 strokes in April but finished in sixth place in the PAC-12 Women’s Golf Championship in Tucson later that month.]

“I think it worked well for us that we played poorly at conference because it helped us reset. They dug a little deeper, practiced a little harder and showed what they were made of.

“I pulled an article out of the Arizona Republic, ‘Mental toughness cannot be underrated.’ We had a meeting about it. I said, ‘Bring your highlighters’ and we talked about it.

“These are qualities that are really important that will hold you through difficult times.”

5. She balanced the work with play.

“That was something I really focused on at the end of the year. I wanted them to have fun on the journey.

“And we did. We had team songs. There are Snapchats of me dancing. That’s not something they always see in me.

“We were about to walk to the tee to play for the national championship and I put my music on and made Robbie Liti dance with me. That was good for her to get her relaxed.

“Our song was by Shawn Mendes, ‘No Holding Back.’ We played it in the cars, and they nicknamed the trophy Shawn.”

Top photo: Missy Farr-Kaye, head coach of the Sun Devils women's golf team, won her third NCAA title in May. Her first was as an ASU player, in 1990, and the second was as assistant coach, in 2009. Photo by Charlie Leight/ASU Now