Nearly 100 high schoolers from tribal nations in Arizona work on research projects, live in the dorm and connect with ASU resources

It was day three of ASU’s 2017 Inspire program, the weeklong camp that offers high schoolers from tribal nations in Arizona a taste of college life, and the Arizona State University Memorial Union’s Changemaker space was abuzz.

The young scholars were working in 19 student teams, brainstorming and mapping out the action research plans they’d share with peers and families at the closing Capstone Project Showcase at week’s end. Their topic choices were informed by their own interests and the previous day’s panel presentations and discussions related to indigenous education; health; tribal sovereignty; and planning, architecture and construction in Indian Country.

The team of Kristen Sanderson, Darian Wauneka, Mackyl Ortega and April Yazzie, all rising high school seniors, had decided to pursue a research action plan related to health and well-being.

Sanderson’s career interests are nursing or dentistry. Wauneka leans toward optometry. Ortega is interested in working with pharmaceuticals, and Yazzie said she’d like to work for a company like Apple or Intel.

As a group, they eventually settled on elder neglect by deciding to draw one topic lottery-style, Wauneka said.

Having done a lot of internet research in Inspire’s indigenous reading and writing workshop that morning, they worked quickly at the whiteboard, referring to the saved data on their phones and adding a few more ideas as they saw the flow of their research coming together.

A neighboring team had chosen to explore land conservation on tribal nations, and what can be done about the U.S. government’s pollution of the land.

“Some of the land appears to be unused; there’s no homes or burial grounds, so the government thinks, ‘Why can’t we build out here?’ In reality, that land is used for grazing or for growing crops and the ecosystem is thrown off by it,” said Noah Anaya, a 12th-grade student.

Another group looked at the election of the Navajo Nation president and how during the race the candidates’ focus on tradition and government affect the outcome.

“If the value placed on government is too high, it’s seen as a conflict with traditional values. I would like to see these values balanced, rather than one taking precedent over the other,” senior Vanessa Lee said.

“Outstanding work!” English Professor Jim Blasingame encouragingly shouted to all, as he finished a first lap around the room offering feedback to teams. “These are topics doctoral students are doing dissertations on.

“You’re worldly and you have your heads in the right place. Remember, you are your best resource,” he continued, as he offered tips about how to discern solid, reputable research facts from opinion. “Be wary of sources that use words like would, should, could, might. That author just wants to sell you on their ideas.”

“You’re all capable and you’re going to learn new things and will grow,” said Jacob Moore, ASU assistant vice president for tribal relations, in his welcome to participants and their families on June 18. “Open your mind to possibilities and you may see some things differently than maybe what you’ve seen in high school. This is a chance for you to envision yourselves on campus and to see for yourself what being in college is like.”

During Inspire, students experienced university life in a Tempe campus residence hall. They ate in dining halls and enjoyed free time and team-building sessions in the Sun Devil Fitness Center. They worked with their peers and instructors in different buildings on the Tempe campus. They also enjoyed sessions at the Desert Botanical Garden, the Heard Museum and the Indian Legal Program at ASU’s Beus Center for Law and Society on the Downtown Phoenix campus.

Throughout the program the high schoolers were guided by 11 ASU indigenous students who served as team mentors, providing tips and advice that come best from near-peers.

“Living on campus has been interesting. Sharing a room and talking with someone else who has similar interests in going to college is great,” said senior Tyler Salt. 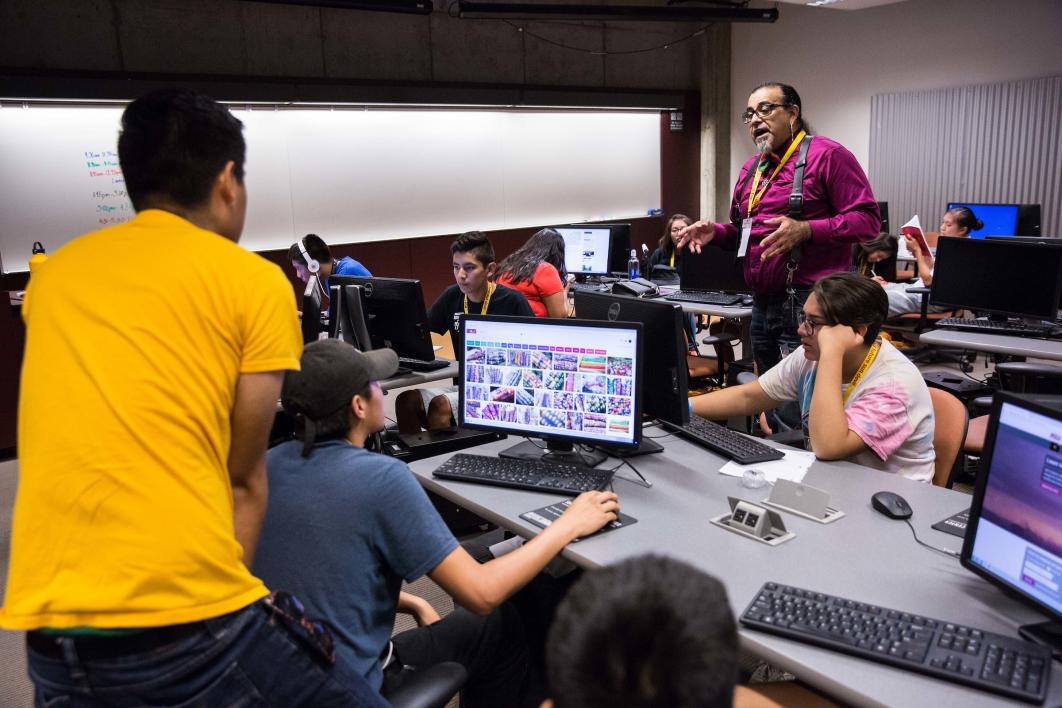 ASU English instructor and mentor Henry Quintero talks with students about indigenous and non-GMO corn during a writing workshop in the Lattie Coor Building in Tempe on June 23 as part of ASU's Inspire program for Native high school students. 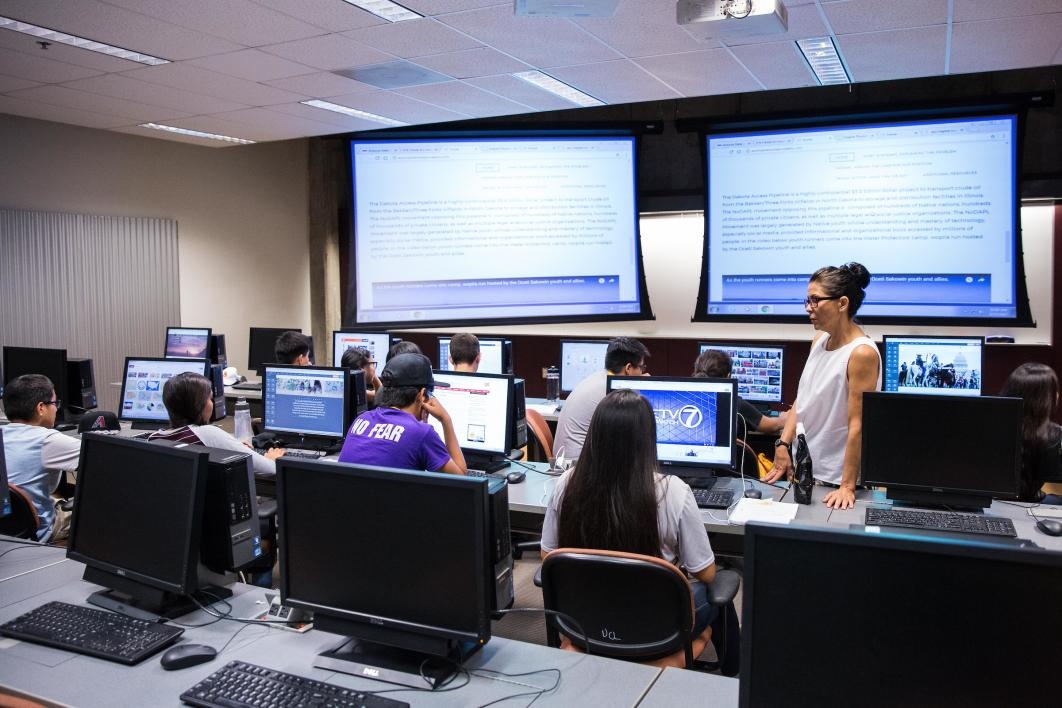 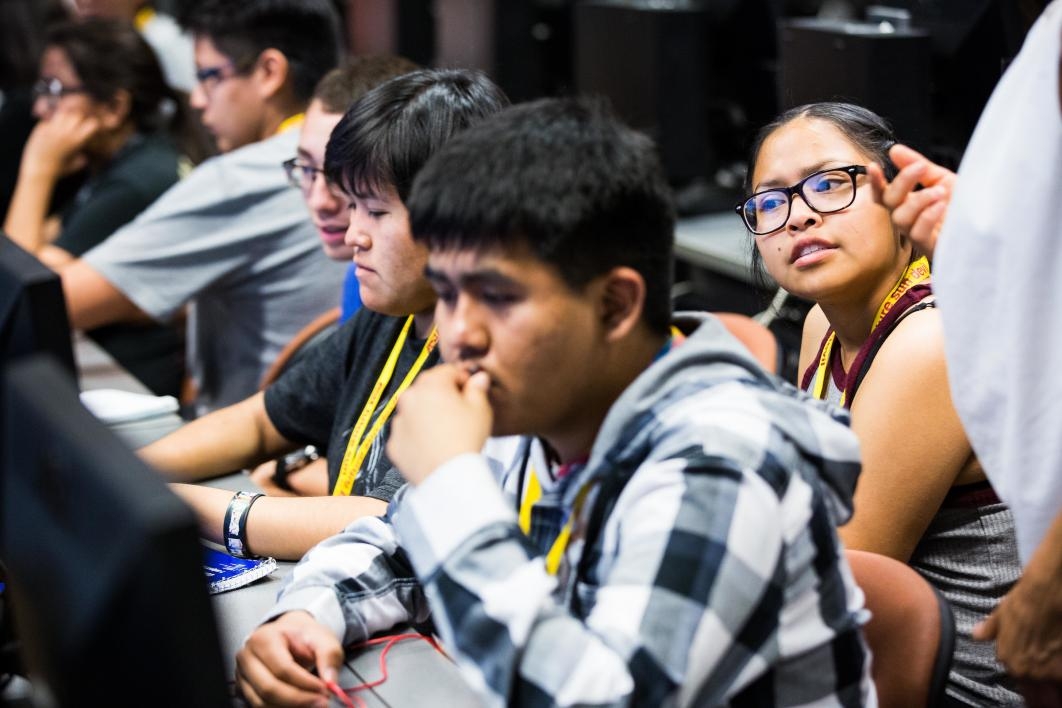 High school student Irvina Miller (right) listens to mentor feedback as she and her team create their website on the Dakota Access Pipeline. 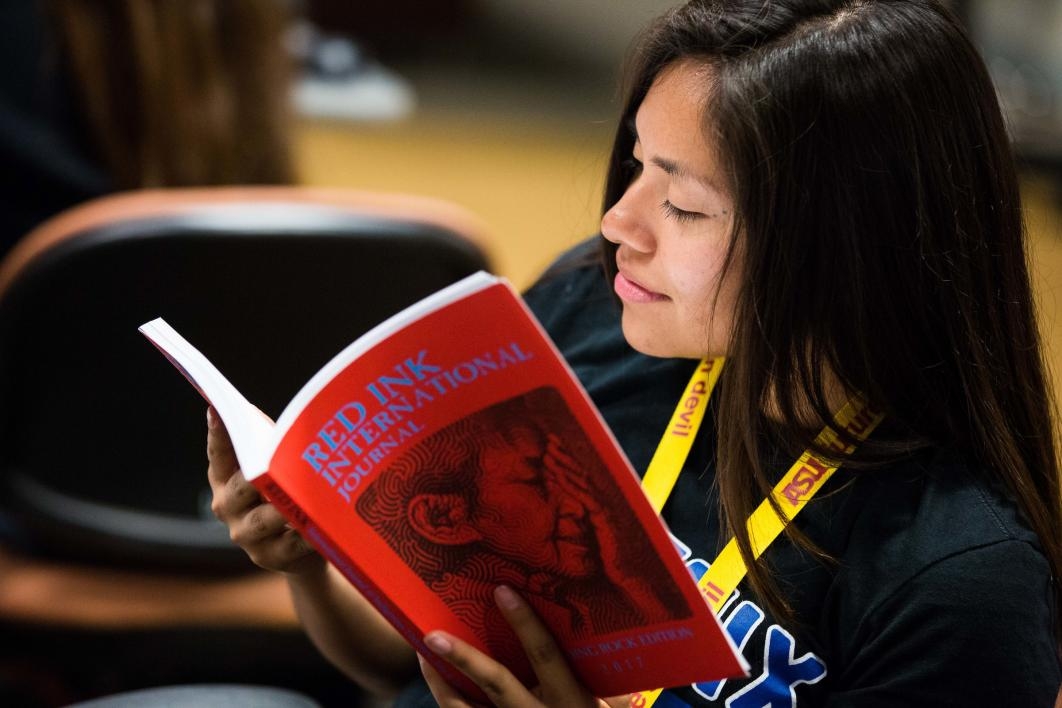 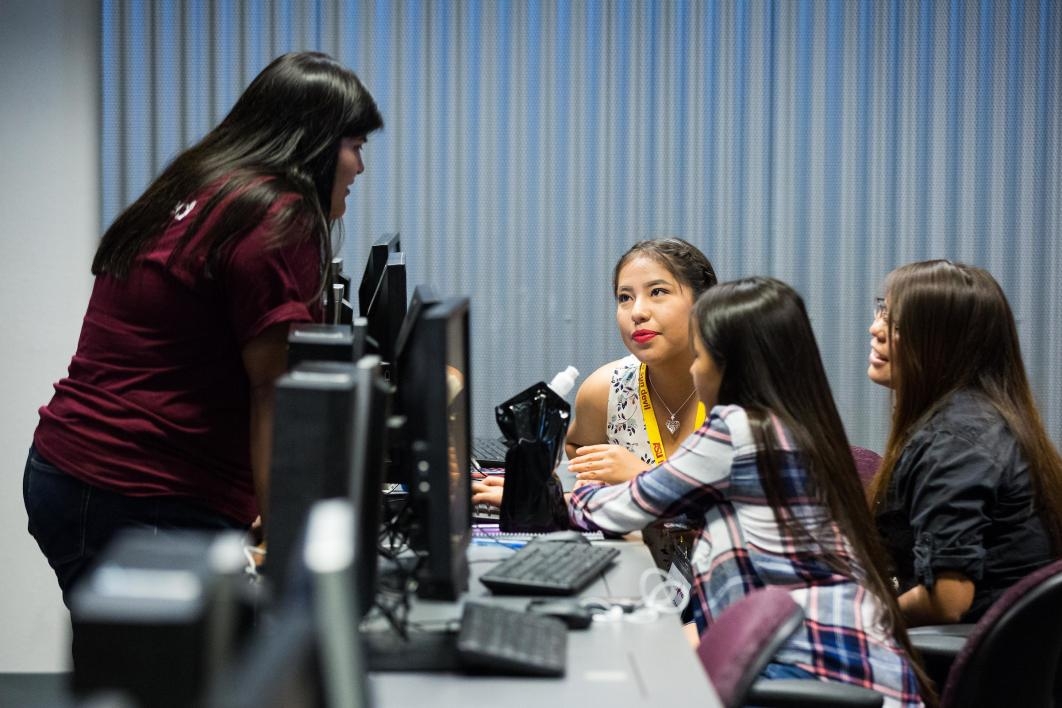 Mentor and education intern Samantha Toledo (left) works with high school students (seated, from left) Kayla Chee, Alexus Amick and Krishna Riggs on their project focusing on culture and language for their community. 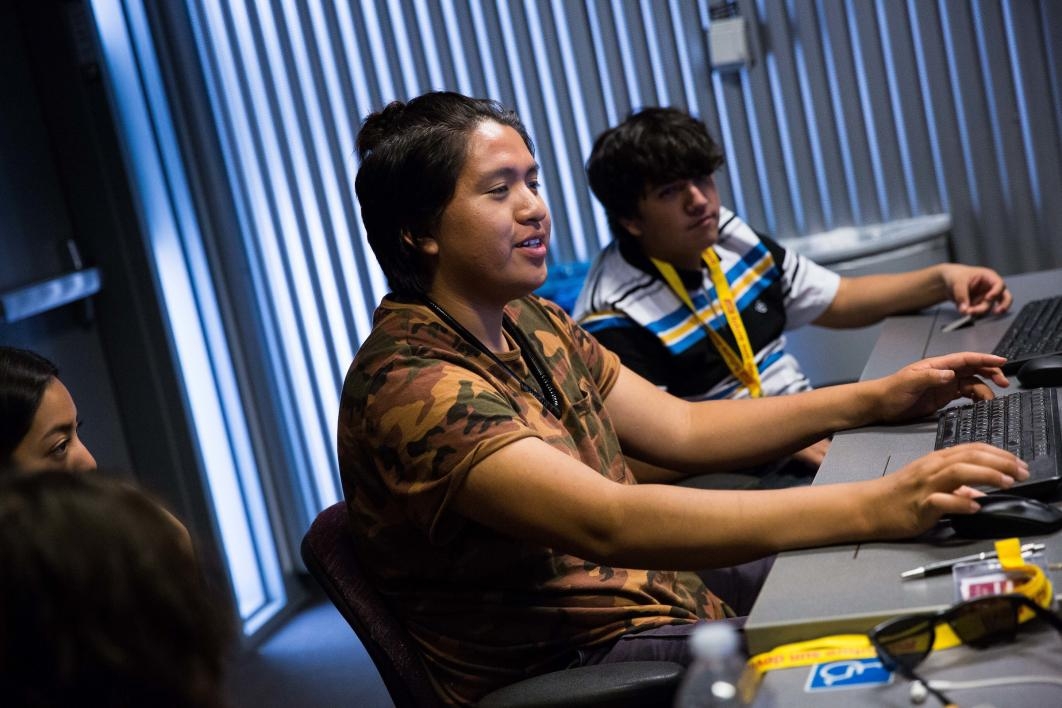 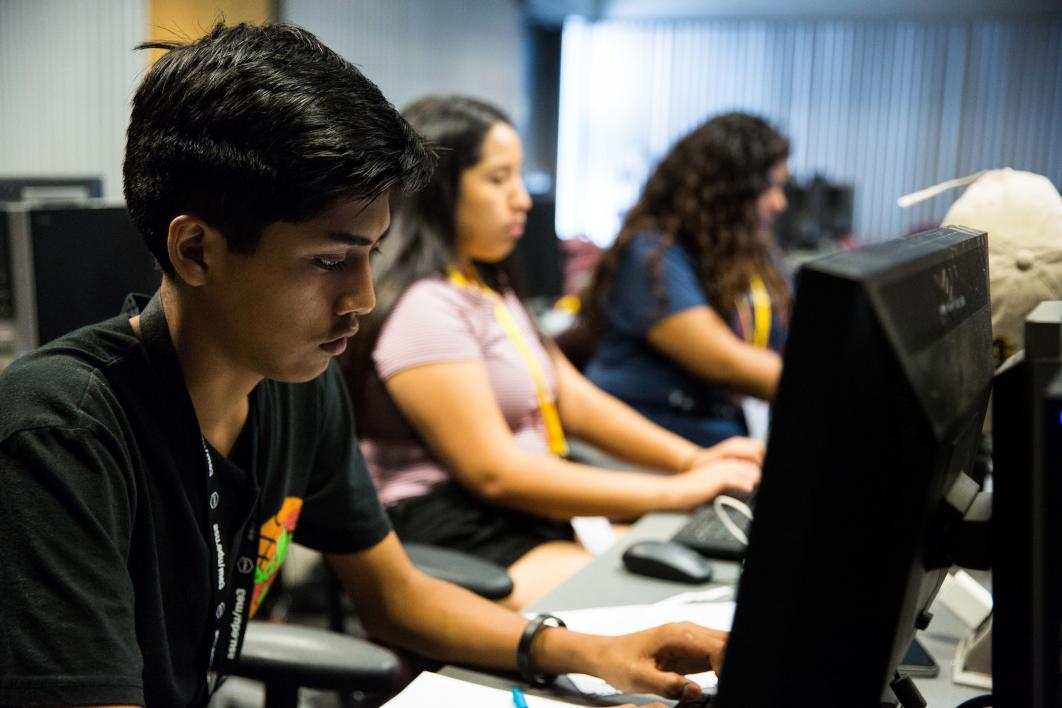 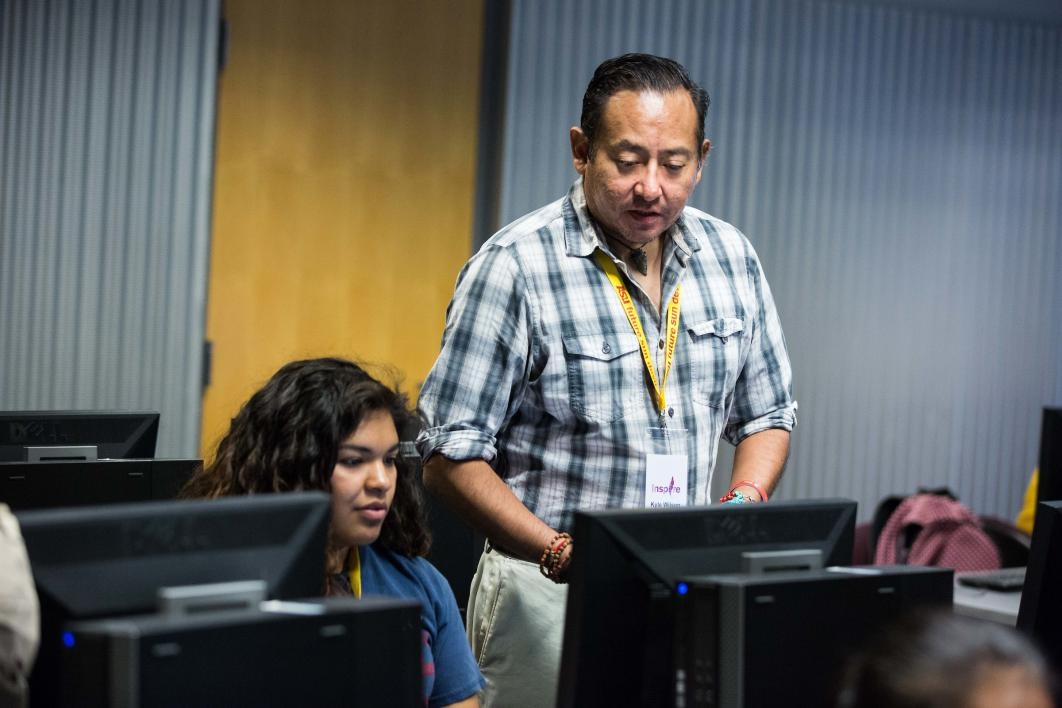 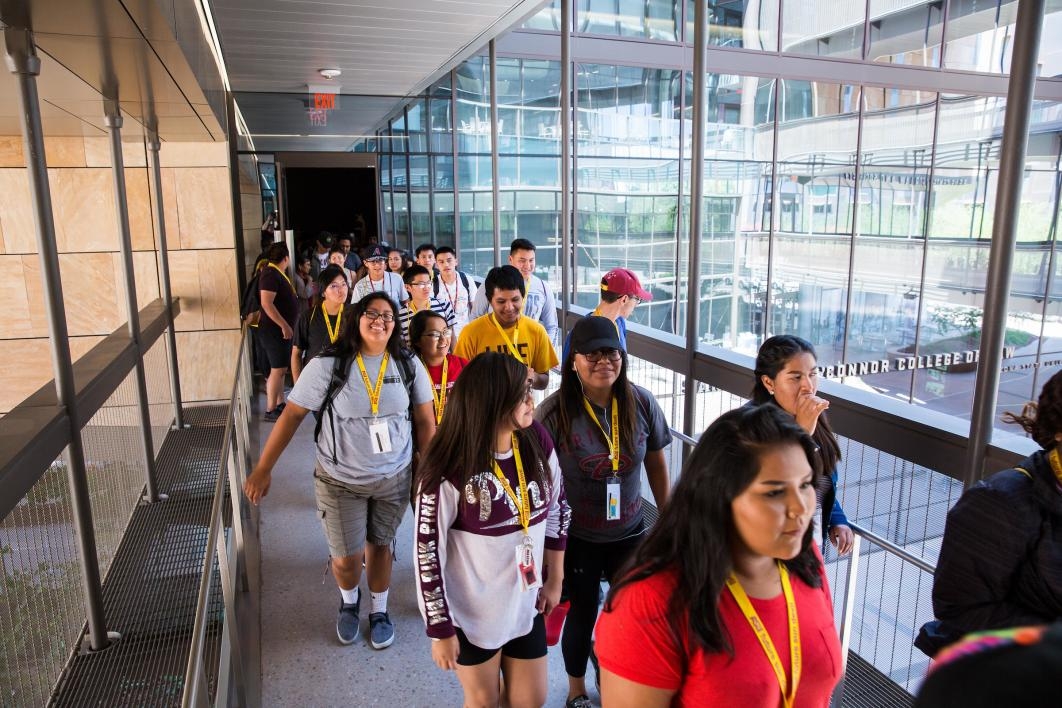 Inspire students make their way to the Indian Legal Program in ASU’s Beus Center for Law and Society at the Downtown Phoenix campus on the morning of June 23. 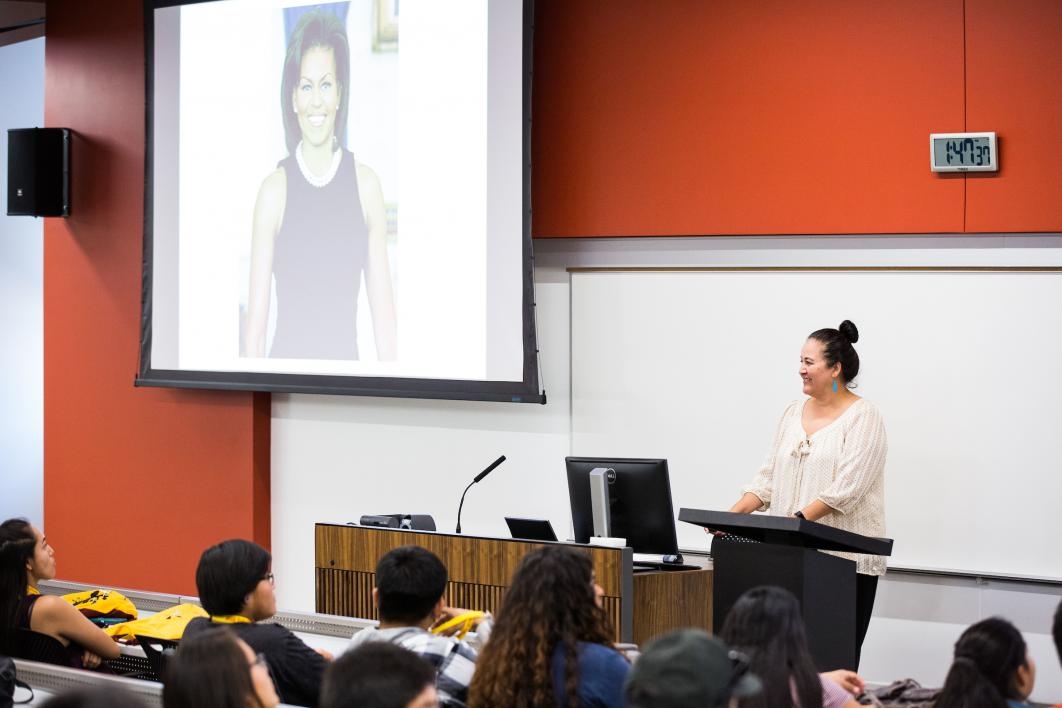 Kate Rosier, executive director of ASU’s renowned Indian Legal Program, talks to Inspire participants about the work of the program. 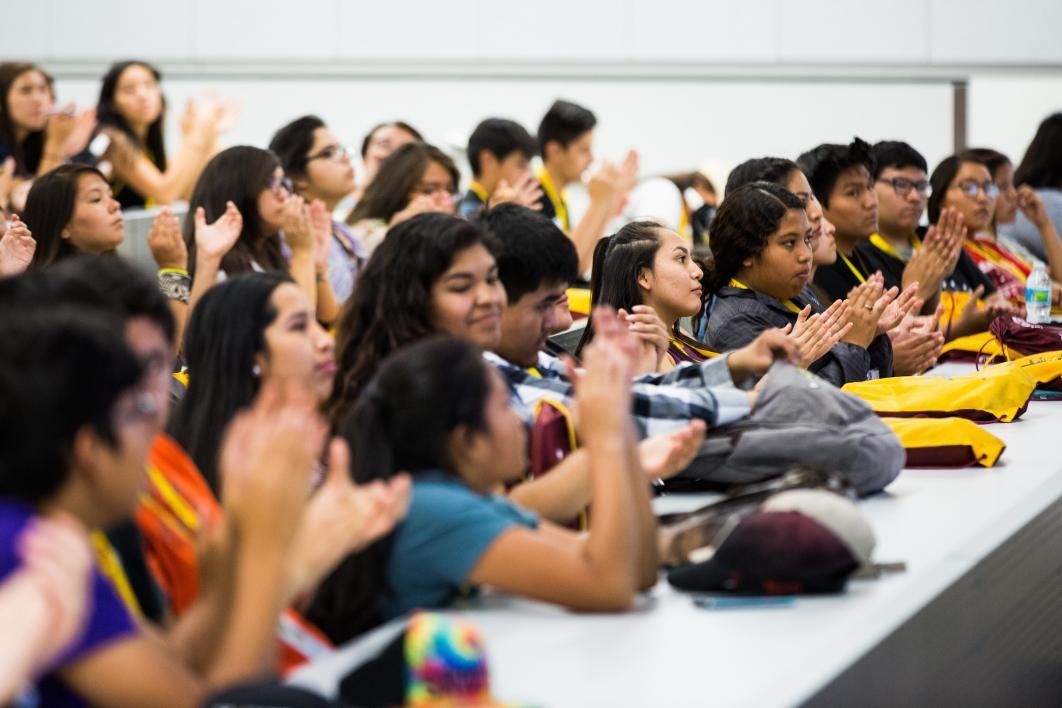 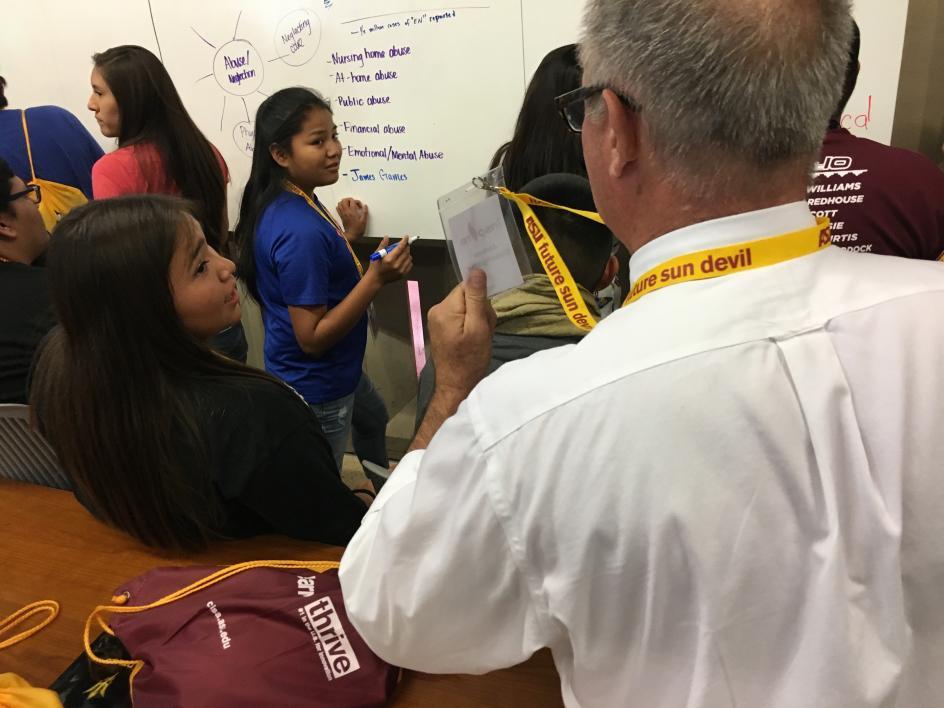 ASU English Professor and Inspire instructor Jim Blasingame checks in with the student team of (from left) Mackyl Ortega, Kristen Sanderson, Darian Wauneka and April Yazzie as they brainstorm their action research project on elder neglect, at Changemaker Central on ASU’s Tempe campus. 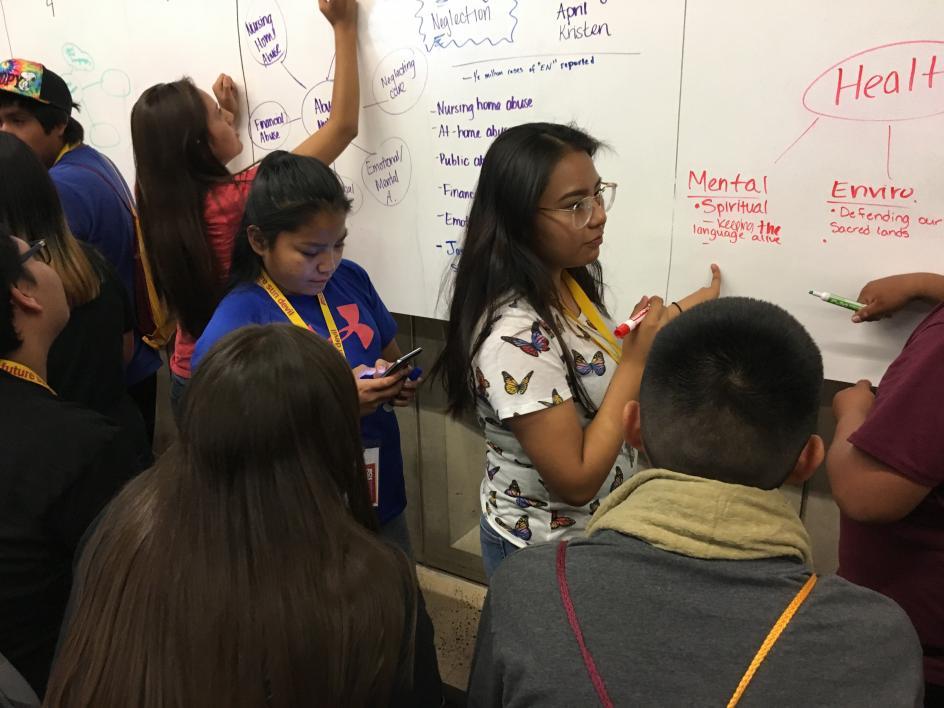 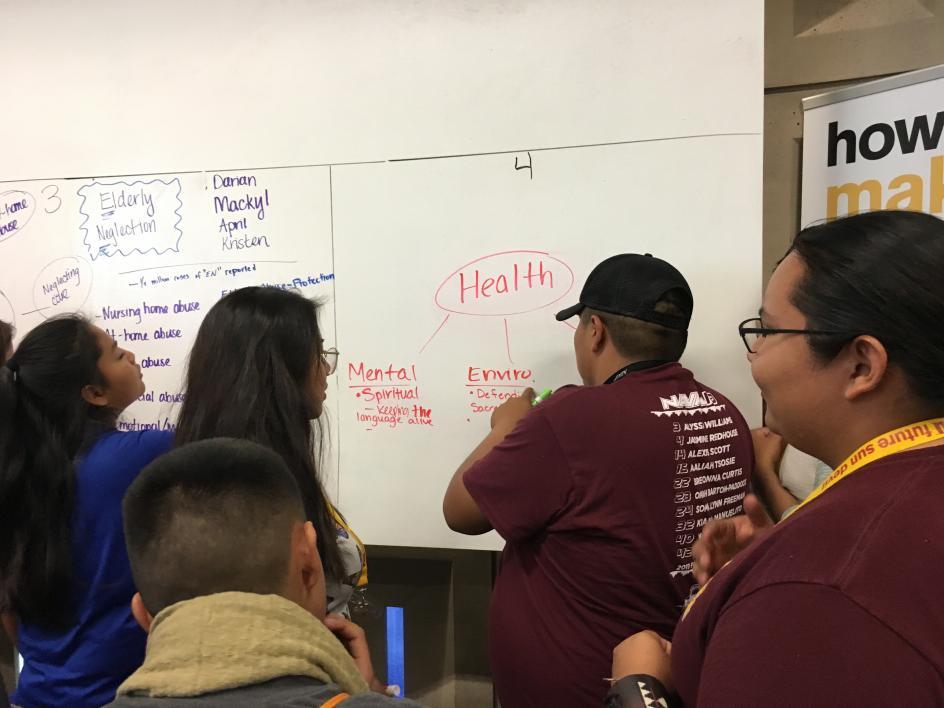 During one of the sessions, the students used the me3 tool to explore majors and careers that interested them, providing a glimpse of their future after high school.

“The career exploration has been my favorite part. I’ve always wanted to be a business administrator, and this is giving me the motivation to pursue it when I come [to ASU] next year,” said senior Hailey Veltha.

“I wanted to be a lawyer, but this has showed me different opportunities that are available to me in the different programs,” Anaya said.

By the end of the program, participants were connected with American Indian students, staff, faculty and support services at the university.

“Programs like Inspire are designed to motivate high school students to begin pursuing higher education, and so it’s important to connect them to the university in general,” said Lorenzo Chavez, director of family and student initiatives for Access ASU.

The program, now in its second year, emphasized the accessibility of the different resources at each of the ASU campuses with a resource fair representing ASU’s schools and colleges.

“We want Inspire participants to feel welcome and comfortable at ASU and understand the many opportunities they’ll find in terms of academics and support. Of course, we hope they will decide to apply to, enroll in and graduate from ASU in the future,” said Jeanne Hanrahan, director of community outreach for the College of Integrative Sciences and Arts, and University College.

“We received about 250 applications for this year’s program and could afford to offer places to 100 students. It's clear that interest in a program like this is strong,” she added.

This year’s Inspire program was sponsored by a grant from the Tohono O'odham Nation to ASU's University College and the Office of American Indian Initiatives, with support from Access ASU.

Chavez and Annabell Bowen, director of American Indian initiatives in the ASU Office of the President, presented a session for parents and families on the opening morning of Inspire. Bowen spoke about the cultural environment at ASU, and Chavez shared information about applying to the university, financial aid and what families can do to help their students in their decision about college.

“We have more than 2,800 American Indian students at ASU, making it one of the largest Native student bodies in the country,” Bowen told family members, “and enrollment numbers have been increasing every year.”

As part of her work in the Office of American Indian Initiatives, Bowen heads up the university’s Tribal Nations Tour program, in which current ASU students, faculty and staff travel to all of the tribal communities in Arizona in outreach to K-12 students.

“We even talk with kids in Head Start programs,” said Bowen. “It’s never too early to encourage children to start thinking about college and to have them get firsthand knowledge of the first steps they need to take to be ready.”

Will Argeros contributed to this story; william.argeros@asu.edu.

Top photo: Students make their way to the Indian Legal Program in the Beus Center for Law and Society at the ASU Downtown Phoenix campus during ASU's Inspire program for Native high school students. Photo by Deanna Dent/ASU Now

The flexible future of electronics

Think your tech is cool? Wait until you see what Umit Ogras is working on.“If we accomplish this, smartphones and tablets will have a new form,” said the electrical engineer at Arizona State University. “You don’t always carry your phone. You always wear a shirt.”Umit OgrasFlexible hybrid electronics can be bent or stretched. Picture pulling a wand from your pocket, unfurling a scroll, a... 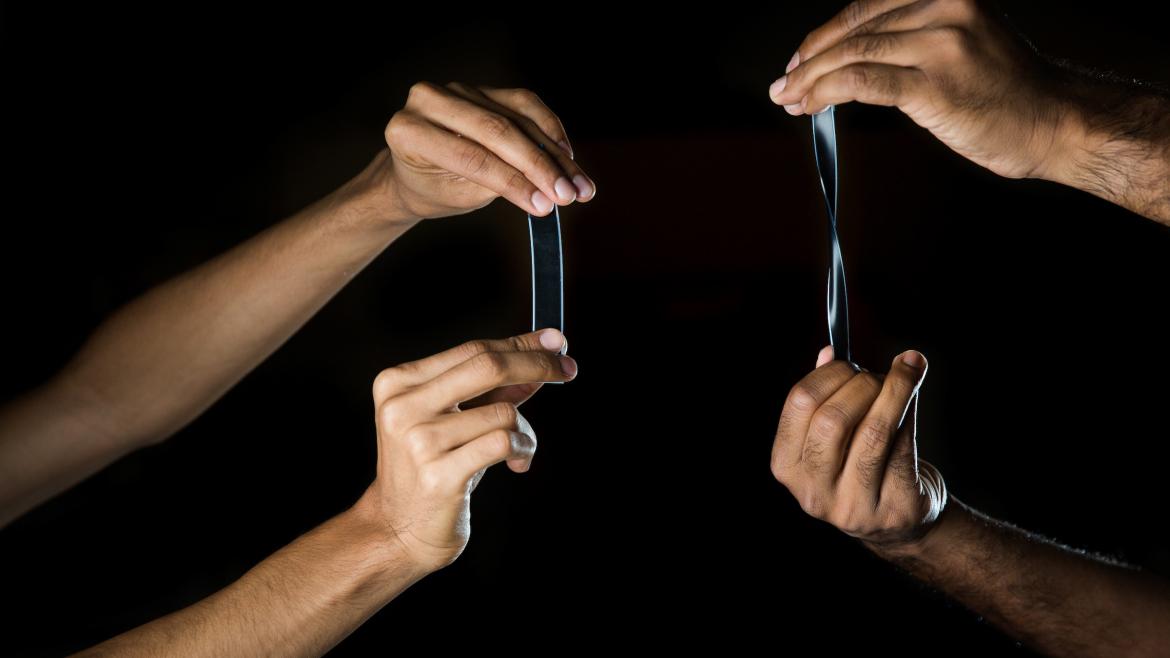 The flexible future of electronics

Think your tech is cool? Wait until you see what Umit Ogras is working on.

“If we accomplish this, smartphones and tablets will have a new form,” said the electrical engineer at Arizona State University. “You don’t always carry your phone. You always wear a shirt.” 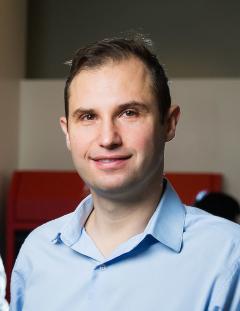 Flexible hybrid electronics can be bent or stretched. Picture pulling a wand from your pocket, unfurling a scroll, and watching a movie on a desktop-size screen.

Watching TV at home? Wave your arm and change channels. In the hospital? A disposable patch on your arm will use wireless connections to transmit data about blood pressure, heart rates and other vital signs to doctors and nurses. Wear a Fitbit watch when you go for a jog? That’s going to disappear into your sleeve, and it’s going to have scores more functions.

Ogras, an assistant professor in the School of Electrical, Computer and Energy Engineering in the Ira A. Fulton Schools of Engineering, recently won a five-year, $500,000 early-career development grant from the National Science Foundation to continue developing flexible hybrid electronics.

“It makes wearable devices beyond watches,” Ogras said. “We want to make them totally flexible.”

Computers have gone from room-size in the 1950s to desktops in the 1980s to handhelds today. Ogras’ research takes them into the next realm.

“The smartphone can disappear if we wear it in our clothes,” he said.

Health, motion and gesture monitoring will revolutionize personal devices. Ogras envisions mute people wearing a glove that will interpret sign language and literally “voice” communication. Wheelchairs will be controlled by arm motion instead of a joystick. Maps and GPS can be incorporated into devices.

“It knows your location in the house and where you want to go,” Ogras said. 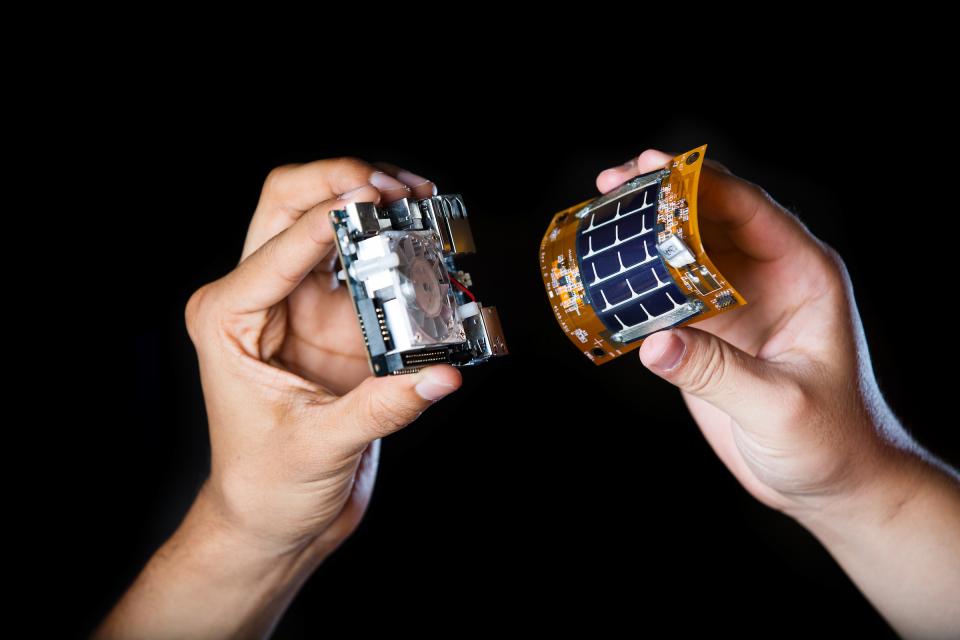 Graduate students show an example of a traditional electric board (left) and the flexible, solar-powered board that can be used in wearable monitors in ASU Assistant Professor Umit Ogras' lab in Tempe on June 28. Photo by Deanna Dent/ASU Now

Three of the biggest problems Ogras is working to crack are the cost, size and battery.

Ogras has been working on the research for three years. He worked at Intel Corporation on smartphones — systems running on chips. His devices will run systems on polymer.

“We hope other people will start working in this domain,” he said.

The NSF Faculty Early Career Development (CAREER) Program offers awards in support of early-career faculty who have the potential to serve as academic role models in research and education and to lead advances in the mission of their department or organization.

Top photo: ASU students show an example of a silicon-based element with embedded electrodes that will be able to sense movement in body parts in Assistant Professor Umit Ogras' lab. Photo by Deanna Dent/ASU Now