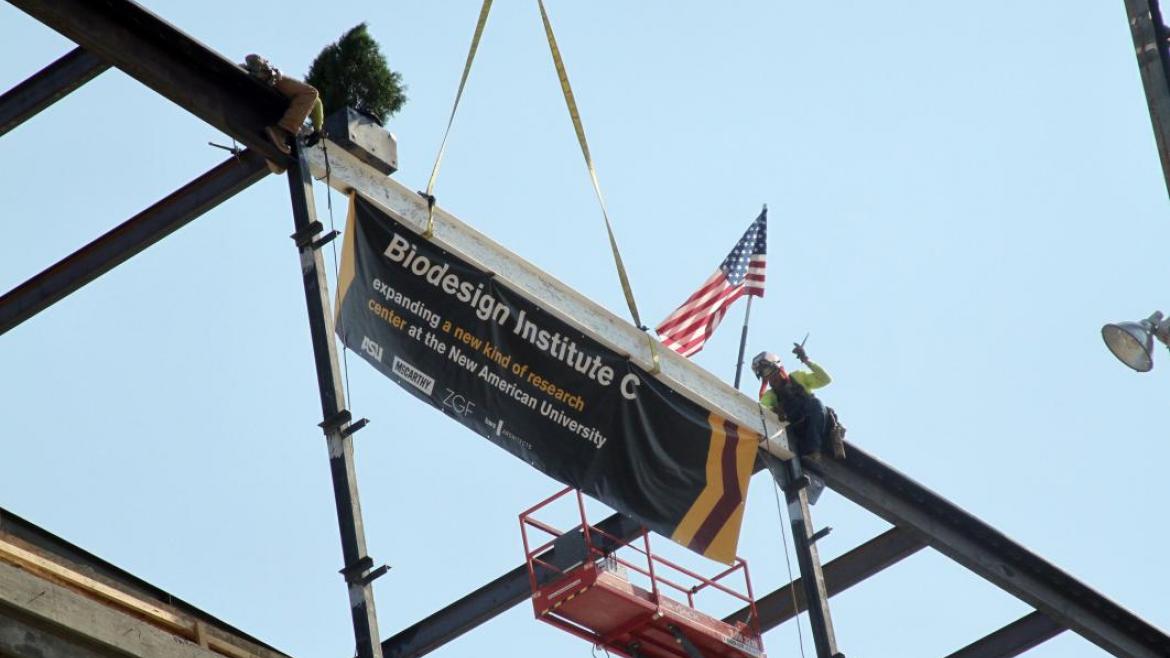 The ceremony officially commemorated the completion of the main structural work and gave the community a preview of future benefits when the third building in the ASU Biodesign Institute’s master-planned, 14-acre complex located on the main campus in Tempe, Arizona, is completed in the summer of 2018.

Joshua LaBaer, Biodesign’s executive director and a renowned cancer researcher, sees the addition of this new space as concrete evidence of ASU’s significant commitment to leading the field with discoveries that keep people and the planet healthy.

“Powered by intellect, energy and innovation, our researchers believe they can accomplish what others often find impossible,” said LaBaer. “With the addition of Biodesign C, we will soon have nearly 700 scientists of all kinds — biologists, engineers, chemists, physicists, mathematicians, computer technologists — and students working together to find creative and clean solutions for energy, air and water. We will invent new diagnostics and treatments that are accessible and affordable, and in some cases, we expect to be able to halt disease before it even begins.”

After a welcome address from Tamara Deuser, acting chief operating officer for the Biodesign Institute and associate vice president of research operations at ASU's Knowledge Enterprise Development (KED), the final beam was hoisted aloft — a 21-foot-long, quarter-ton metal beam placed by workers for McCarthy Construction, which oversees the construction of the nearly 200,0000-square-foot building. Attached to the beam were an American flag, Biodesign banner and a pine tree, traditional emblems of topping-out ceremonies for steel-constructed buildings.

“Topping out marks a significant milestone in the construction process, signaling the final beam placement of a new structure,” said Justin Kelton, president of McCarthy Building Companies’ Southwest division. “For a research facility of world-class caliber like Biodesign Institute C represents, topping out is even more meaningful because it brings with it significant hope for our future and the promise of new discoveries and innovations.”

Biodesign Institute C will house a key drug discovery and bioenergy research tool — the world’s first compact free-electron X-ray laser — a super X-ray that will peer deep inside proteins to better understand both the action of molecules critical to cancer and other devastating diseases and better understand how plants convert sunlight into renewable energy. Scientists of varying disciplines will be in the lab’s “neighborhoods,” a layout of close proximity that encourages collaboration. The design is modeled after state-of-the-art research complexes like the J. Craig Venter Institute in La Jolla, California, which was also built by McCarthy. 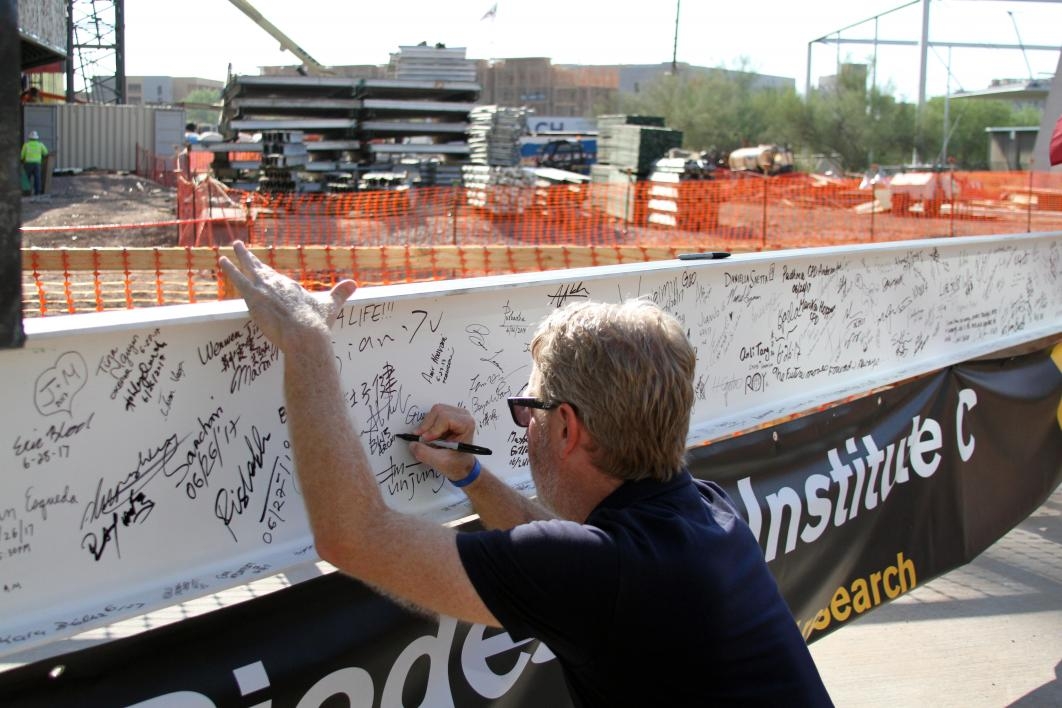 People sign their names to the final beam before it is hoisted to the top of Biodesign Building C on Wednesday morning in Tempe. 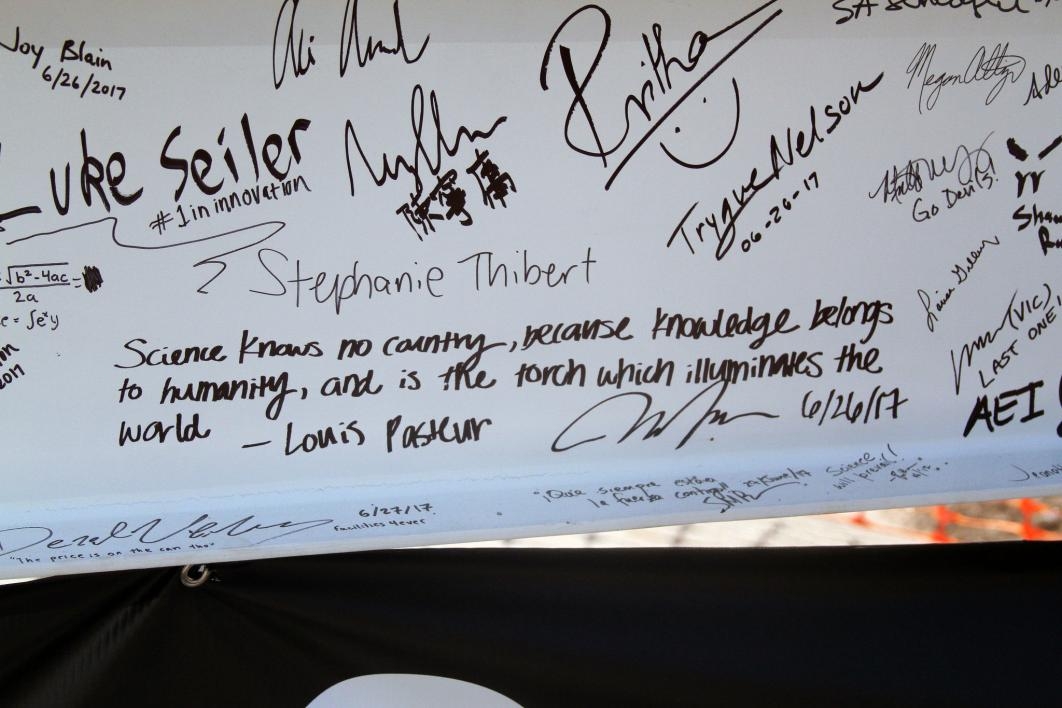 Amid the signatures are inspiring messages. 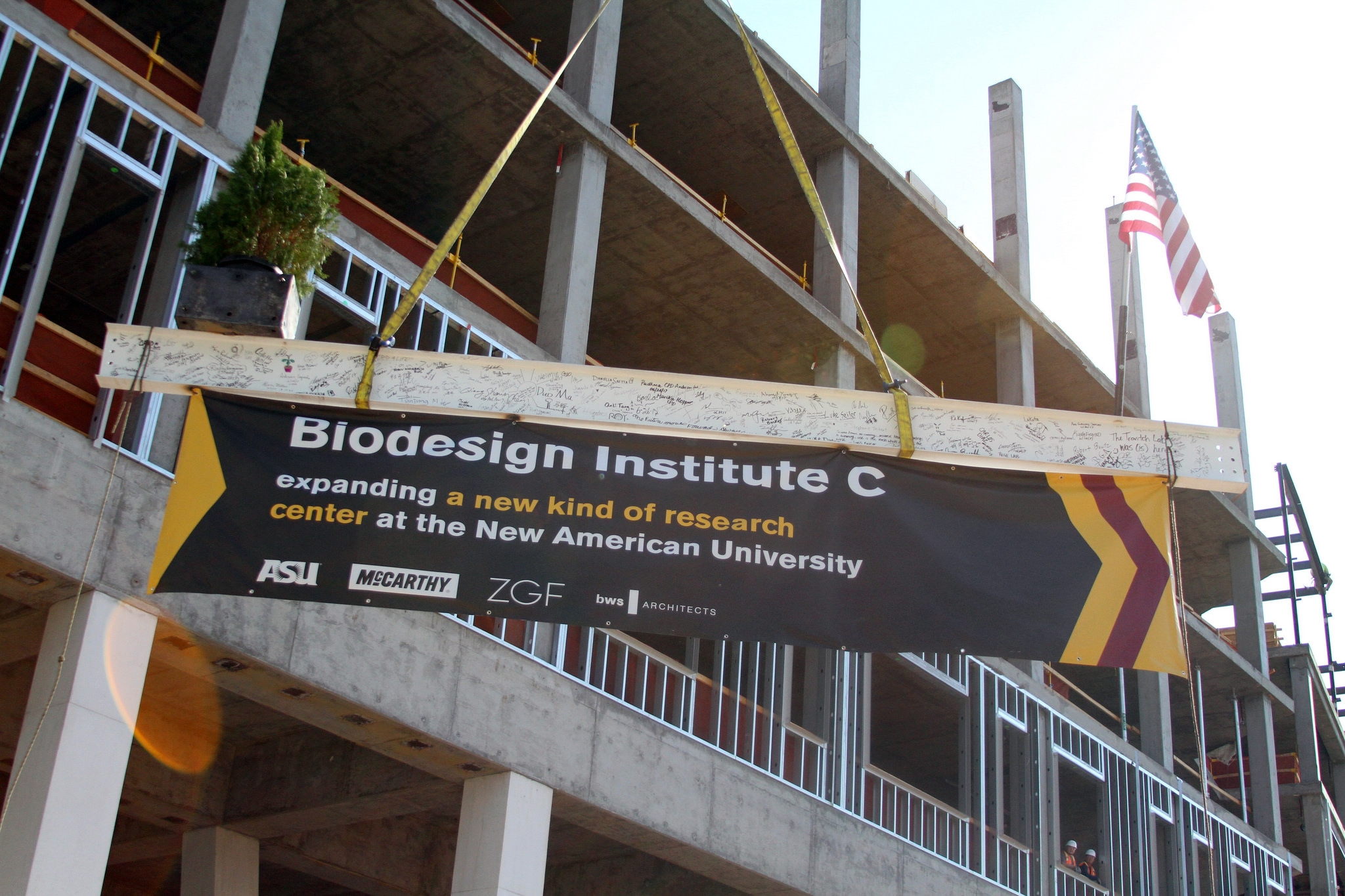 In addition to a Biodesign banner, a pine tree and an American flag are attached to the beam — traditional emblems of topping-out ceremonies for steel-constructed buildings. 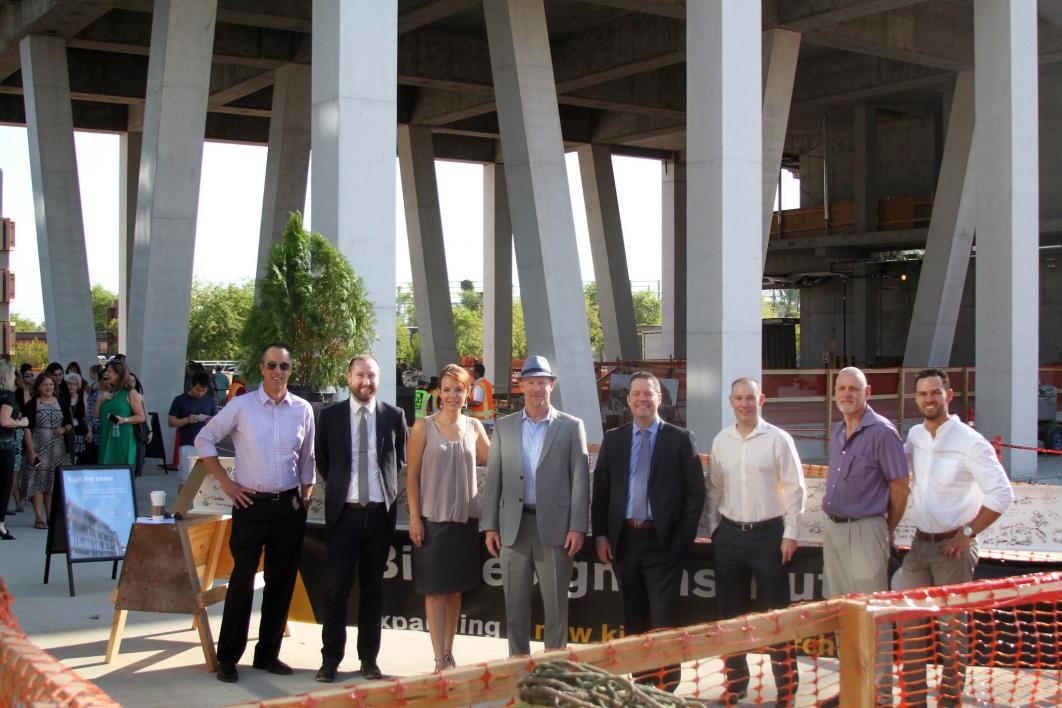 Dignitaries from ASU, McCarthy Construction and architects Zimmer Gunsul Frasca and BWS Architects are on hand to celebrate the milestone.

Major research highlights include the following:

The new research facility includes five stories, a mechanical penthouse, plus a basement that connects with the ASU Biodesign Institute B building and will house the X-ray laser facility. The building’s adaptable design will accommodate multiple types of scientific research, including chemistry, biological sciences and engineering research. The building, composed mostly of wet laboratories and offices, also includes high-bay spaces.

The project team, which includes architects Zimmer Gunsul Frasca and BWS Architects in addition to general contractor McCarthy Building Companies, is employing the latest in virtual-reality technology and modeling to successfully execute this project for fast-track completion in spring 2018.

Some of the design and construction solutions implemented to date include:

The targeted official opening date of Biodesign C is June 2018.

Arizona State University's Herberger Institute for Design and the Arts is the recipient of a National Endowment for the Arts Our Town grant, as recently announced by NEA chairman Jane Chu. The 89 awards, totaling $6.89 million to support projects across the nation, included a $100,000 grant to support the Creative Placemaking Policy Fellows program at ASU's Herberger Institute.The NEA received 2...

Arizona State University's Herberger Institute for Design and the Arts is the recipient of a National Endowment for the Arts Our Town grant, as recently announced by NEA chairman Jane Chu. The 89 awards, totaling $6.89 million to support projects across the nation, included a $100,000 grant to support the Creative Placemaking Policy Fellows program at ASU's Herberger Institute.

“The arts reflect the vision, energy and talent of America’s artists and arts organizations,” Chu said. “The National Endowment for the Arts is proud to support organizations such as the ASU Herberger Institute for Design and the Arts, to cultivate vitality in their communities through the arts.”

The Herberger Institute will partner with the Center for Performance and Civic Practice, which is led by Herberger Institute Professor Michael Rohd, to establish a Creative Placemaking Policy Fellows program with practitioners who have led successful partnerships between the arts and community development fields. Fellows will work together to identify potential barriers to successful creative placemaking and strategies for overcoming them and to find ways to infuse the work across the community development field. They will also produce training tools, such as a podcast, video or piece of writing, for dissemination.

For a complete list of projects recommended for Our Town grant support, visit the NEA website at arts.gov. The NEA recently relaunched the creative placemaking web page, which has multiple resources.