The presenter went around the conference room on Friday morning, asking participants if they thought of themselves as entrepreneurs.

Not one of them — eight Native American business owners — raised their hand or said yes.

“We’re taught to be humble in that sense, not to boast,” said Kelsey Haake, a Phoenix-based certified financial manager and estate planner. “We haven’t been ingrained to think ourselves of that way.”

Haake (pictured above, center), originally from the Inupiaq Tribe in northwestern Alaska, said humility is heavily emphasized in Indian Country and that Native Americans are taught not think of themselves as better than others or go out of their way to stand out from the crowd.

Host Traci Morris smiled knowingly, anticipating the reason. But she wanted everyone to give themselves a pat on the back for a job well done.

“I never called myself an entrepreneur either, but I would argue that you’re all innovators, business people and entrepreneurs,” said Morris, ASU’s American Indian Policy Institute director and Inno-NATIONS founder. “If we weren’t great innovators and adaptors, we wouldn’t have survived Colonialism. I think Native Americans are the greatest entrepreneurs of all.”

The goal is to support up-and-coming Native American businesses and ignite their enterprises to fuel sustainable tribal economies by rejuvenating and modernizing traditional trade networks.

Morris said by spearheading innovative partnerships and leveraging resources from ASU, tribes and community organizations, she hopes that Inno-NATIONS will create a “collision community,” causing a ripple effect of economic change in tribal communities.

This year marks the inaugural cohort with Native entrepreneurs, which met from June 22-24. After an opening reception in downtown Phoenix, they got down to business. Through a learning lab, strategy discussions, multimedia presentations and mentorship, the eight participants worked on and learned about business pitches, storytelling, indigenous innovation principles, strategic planning sessions, startup models and business goals. They also read financial statements, took quizzes, watched videos and read several articles by ASU professors.

Morris said after this weekend, they’ll also receive six months of follow-up business counseling, webinars, membership in the Arizona American Indian Chamber of Commerce and a feature article in The Visionary magazine.

The information learned in these sessions was valuable, said Chickasaw Nation citizen Kristen Dorsey. She traveled from Los Angeles to participate.

“These activities were really helpful to me in defining markets and speaking to them effectively,” said Dorsey, who has a Southeastern-inspired line of jewelry. “It was definitely worth the trip.”

For Hopi Tribe member Delvan Polelonema, who owns Naqwatsveni Skateboarding, it was more about receiving confirmation that he was on the right track.

“It’s helpful to know someone else who's been there believes in what you’re doing,” said Polelonema. “I now have more confidence in myself and my product.”

So does Haake, who by the end of the session started to get used to the idea of calling herself an "entrepreneur.”

“I’m more open to the label of calling myself an entrepreneur after this formal business training,” Haake said. “I can say it now without feeling strange about it.” 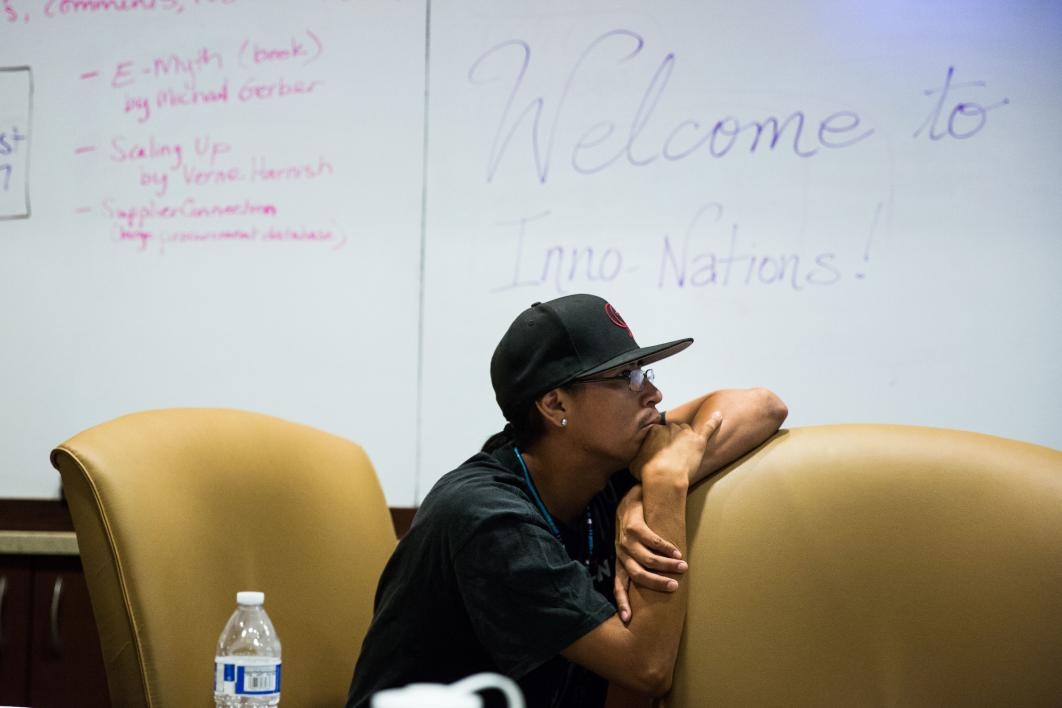 Delvan Polelonema, Hopi Tribe member and owner of Naqwatsveni Skateboarding, listens to speakers during ASU's Inno-NATIONS entrepreneurship training for Native American business owners in downtown Phoenix on Friday morning. Polelonema said he now has more confidence in himself and his product after receiving feedback during the seminar. 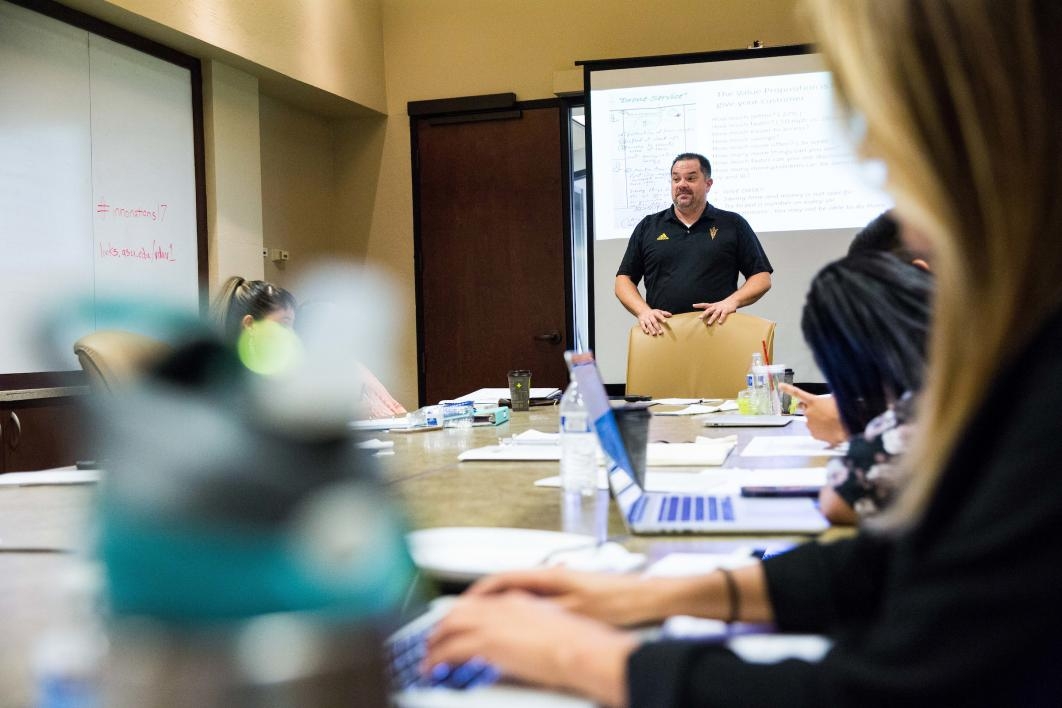 Chickasaw Nation citizen and jewelry designer Kristen Dorsey traveled from Los Angeles to participate in the cohort. “These activities were really helpful to me in defining markets and speaking to them effectively,” she said. “It was definitely worth the trip.” 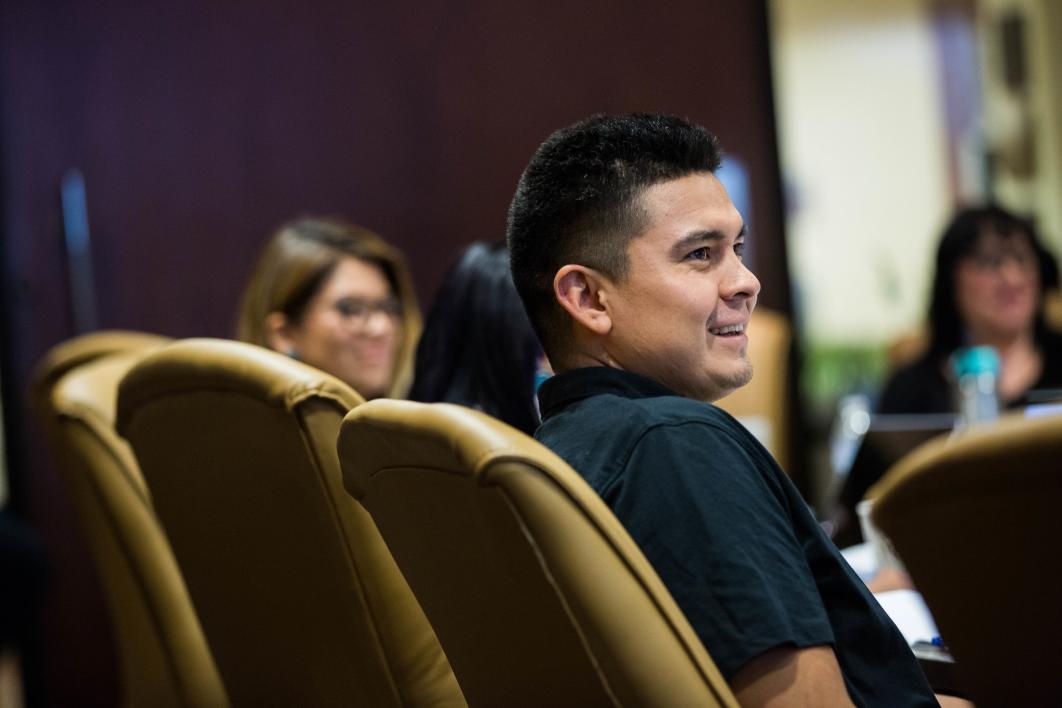 ETD Inc. owner Adrian Dotson listens to speakers Friday in Phoenix. The members of the cohort will receive six months of follow-up business counseling, webinars, membership in the Arizona American Indian Chamber of Commerce and a feature article in The Visionary magazine. 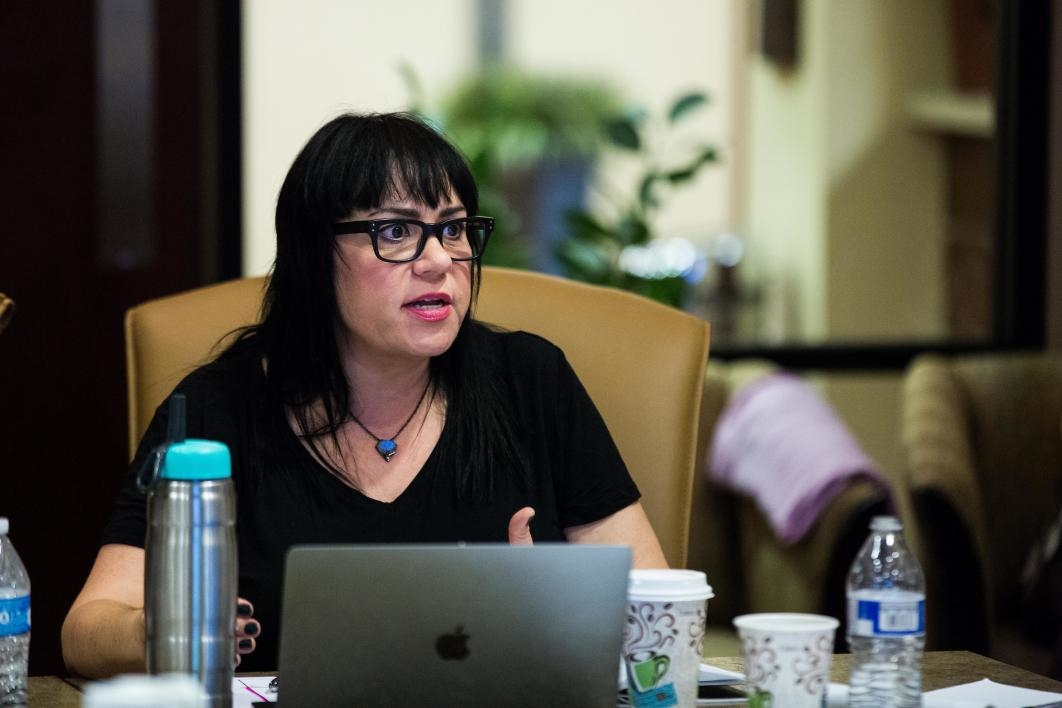 Editor's note: Lluis Algue Sala is a doctoral student at the School of International Letters and Cultures at Arizona State University. In between his studies, Sala travels, biking across countries and continents. He believes in connecting with locals, enriching himself through authentic experiences. While he "bikepacks" independently of his linguistic work, Sala enjoys observing the way people int...

Editor's note: Lluis Algue Sala is a doctoral student at the School of International Letters and Cultures at Arizona State University. In between his studies, Sala travels, biking across countries and continents. He believes in connecting with locals, enriching himself through authentic experiences. While he "bikepacks" independently of his linguistic work, Sala enjoys observing the way people interact and overlap despite their language differences. Read his story in his own words.

"During my summer breaks, and after the pressure and hard work from the academic year, I feel that I need to travel as many other people do. I like to do it (and I reckon I have no alternative) in a simplistic way that lets me reset my mind to face all the new challenges that following course always has in store. For me, it is as important to end a course being satisfied with the job done as starting the new one excited and ready for whatever that might come. Traveling in summer, among other things, serves this purpose. 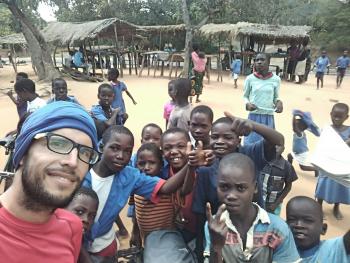 "For the last 10 years, moving around the world has become some kind of lifestyle to me. I have worked in five different countries, and I have extensively backpacked around Europe and Asia, where I settled and taught Spanish in a Chinese university for six years.

"Some years ago, while I was enjoying tea and sunset in the colossal Naghsh-i Jahan square in magical Isfahan, Iran, I felt that my trips were slowly becoming meaningless, feeling somehow empty, tired of travelling, and I realized that backpacking was gradually becoming, in a way, boring and monotonous. As an eager traveller, that feeling certainly worried me and I spent a couple of years without much travelling when settled in China.

"One winter, during the Chinese New Year Holiday, I somehow reluctantly bought a flight to Sri Lanka just because it was cheap and I needed a break from China and personal issues, but I was not really excited about the trip itself. While on the plane, I suddenly decided that once I landed in Colombo I would buy a bicycle and would start cycling and see what might happen.

"Twenty-five days later I had circumnavigated the island with a $25 bicycle and super-rudimentary gear, having the time of my life. I had fallen in love with bikepacking and once again I did it on the cheap and going local; first-world comfort was never necessary.

"From then, whenever I have some time off (summers), I cycle, or bikepack. I have done 1,500- to 2,000-mile trips in Uganda, western China, British Columbia, Alaska and right now I am in Lusaka, capital city of Zambia, halfway between the 4,000 miles separating Nairobi and Cape Town, starting point and final destiny of my summer trip. I have cycled through Tanzania and Malawi, and after Zambia I am headed to Namibia. 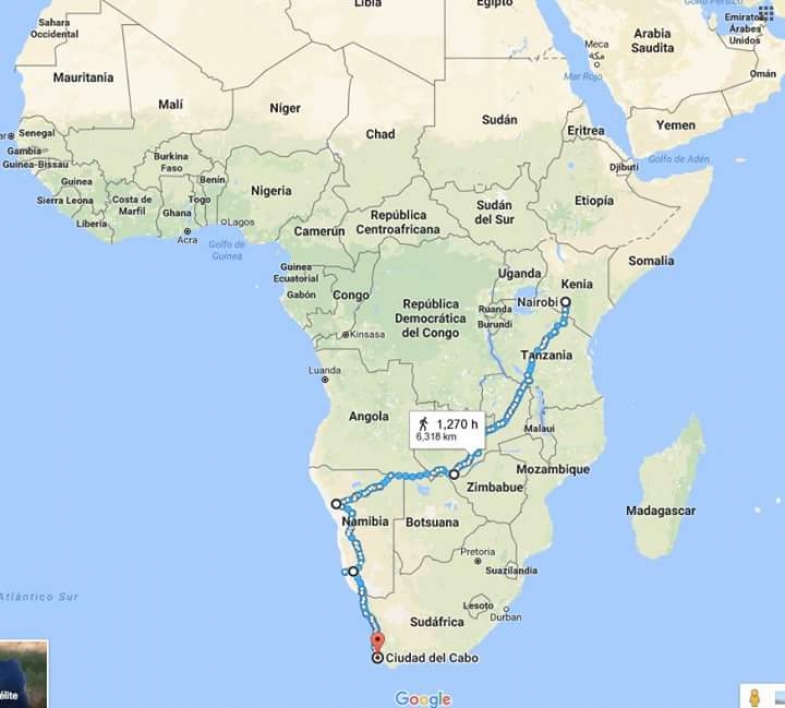 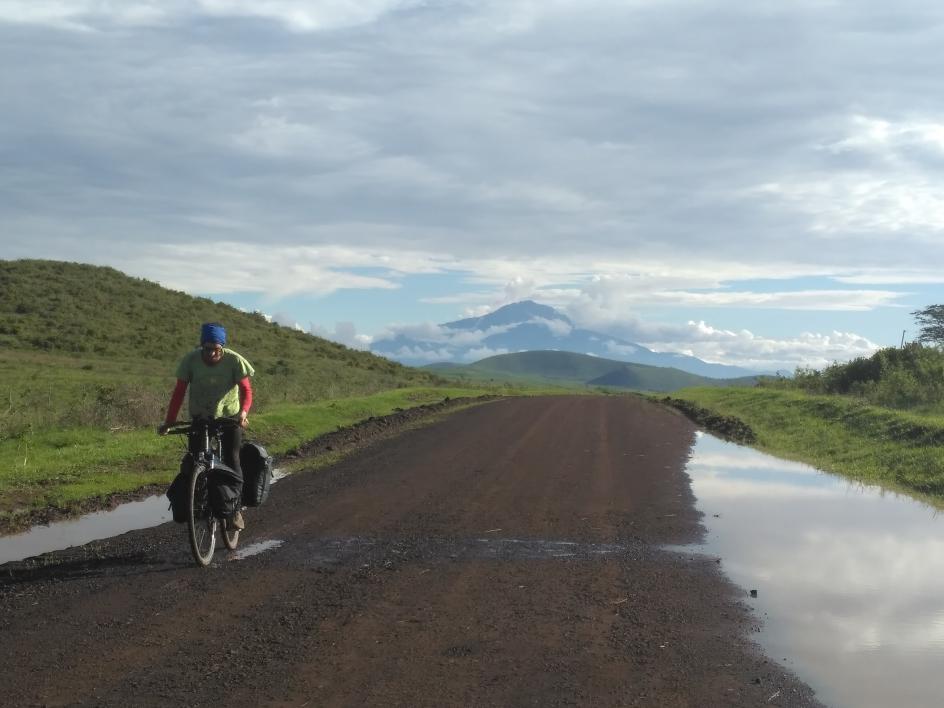 "Cycling an average of 50 miles a day for 85 days, this is the longest cycling trip I have ever done. I eat what the locals eat and sleep where the locals sleep. When cheap accommodation is not available, I just ask permission and pitch my tent wherever the local leaders allow me. Believe me, it's lots of fun.

"I remember a friend of mine telling me that 'cycling lets you go where touring buses don't go.' Well, it's a little bit more than that. By cycling, I pass by hundreds of settlements where not even local buses stop, which provides me a deeper contact with local people and their cultures. It becomes priceless knowledge about cultural differences and living realities that is impossible to get otherwise. There is a big difference between reaching a village in a Jeep with AC than doing it after having cycled 70 miles, sweaty, dirty, thirsty, hungry and smelly.

"Somehow, the distances between them and you fade easily; learning from each other becomes an easier game that I feel enriches us mutually. For instance, as a linguistics PhD student, it amazes me to see how people who literally have nothing have become bilingual or even trilingual, due to the rich cultural and linguistic diversity they are continuously exposed to in their communities. I might learn some words of a local language (please, thanks, hello, bye-bye) which will not be understood some miles away, and this really fascinates me. At the same time, when preparing my trips, I do extensive readings and research about my destinations, and experiencing how readings and reality intersect or not is always some kind of surprise box.

"However, it's important to note that such an experience is not a walk in the park, because getting so close to local cultures also lets you see things that you might not like, might not expect or sadden you, such as the prevalence of poverty and many other associated issues. Sometimes the reality in underdeveloped countries is sweetened by certain Western accounts ('They are poor, but they are happy'). But once you find yourself there, you come to realize that such statements are, at least, arguable.

"For example, last week I cycled a stretch of 200 miles where all the men living in those little villages were inebriated all day long due to the lack of opportunities and future in the area they lived, spending all their scarce monetary resources on alcohol with all the implied consequences for their families and communities. I felt really hopeless about them, and the whole situation truly frustrated and hurt me, realizing again how tough life can get in the certain parts of the world.

"Still, for good or bad, I try my best to pile up all the stimuli that I can during my trips. It goes without saying that everything contributes a lot to my personal and professional growth, especially when dealing with differences, not only interculturally but also between classes. Despite the fact that 'wealthy' is not an adjective to describe a TA at all, I still live, unlike them, in a land of material abundance and with future opportunities and I am logically seen and perceived as such. Establishing an intercultural dialogue under these circumstances is also something from which one learns a lot and prepares him/her for successfully facing the challenges that our global world presents. Needless to say, my long rides also allow me to reflect a lot on what happens around me, put some order in my life and continuously reassess my goals and direction in every aspect of my life.

"Moreover, I am strongly convinced that as scholars it's essential to get out of the books, libraries, papers and authors' bubble and experience what's happening out there and set bridges with reality, which at times might become idealized by academia. In the fast-changing world we live, I believe that being in the field as much as possible is a key factor to keep updated on our development."

Learn more about SILC by going to https://silc.asu.edu/