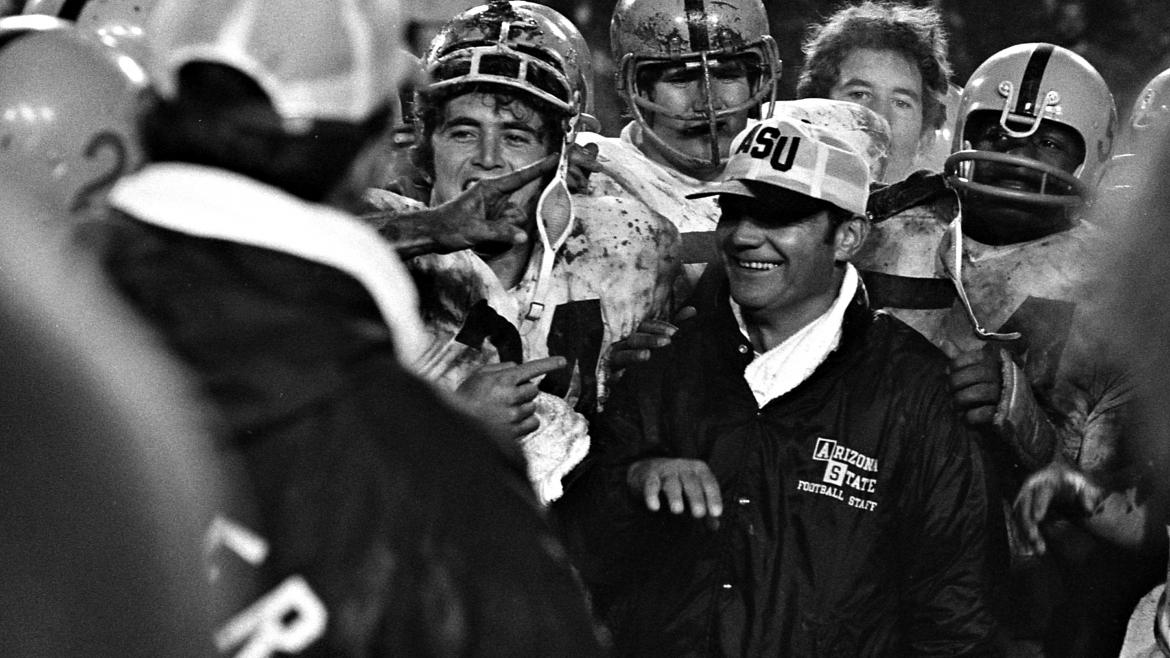 Winningest coach in ASU football history died Thursday at age 88, hailed as the man who built the university into national power

Frank Kush, Arizona State University and College Football Hall of Fame inductee and the winningest coach in Sun Devil football history, died Thursday at age 88. Kush was a part of the ASU family since 1955 and served in many roles over the years, most recently as an ambassador for Sun Devil Athletics. 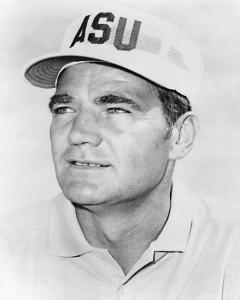 "Coach Kush built ASU into a national football power,” ASU President Michael M. Crow said. "He taught us how to make football work, and he put ASU on the map long before it was a full-scale university. Throughout his life he maintained his strong connection to ASU, working with coaches and devoting time to the football program. By growing ASU football he helped us build the whole university into what it is today. He will be sorely missed.”

Kush went on to win 176 games — the most in school history — across 21.5 seasons and was elected into the College Football Hall of Fame in 1995. He led his team to seven Western Athletic Conference Championships and guided the Sun Devils to winning seasons in 19 of his 22 years. The Hall of Famer also holds the ASU football record for most postseason victories.

“Frank Kush is Sun Devil football,” said ASU Vice President for University Athletics Ray Anderson. “… Today, he and his family are in our hearts." Frank Kush won 176 games, the most in ASU history, across 21.5 seasons and was elected into the College Football Hall of Fame in 1995. 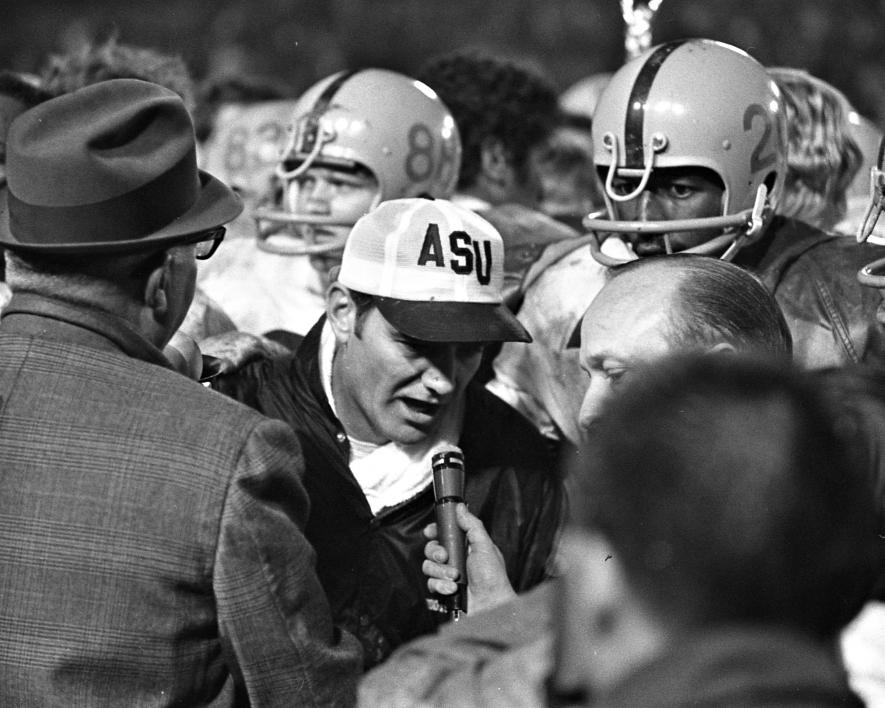 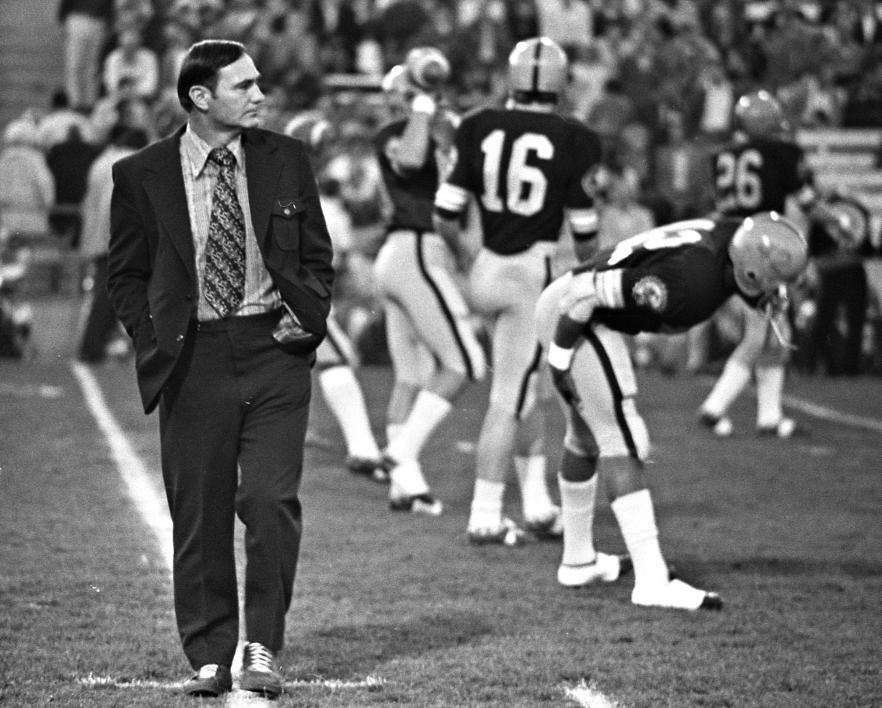 The Hall of Famer also holds the ASU football record for most postseason victories. 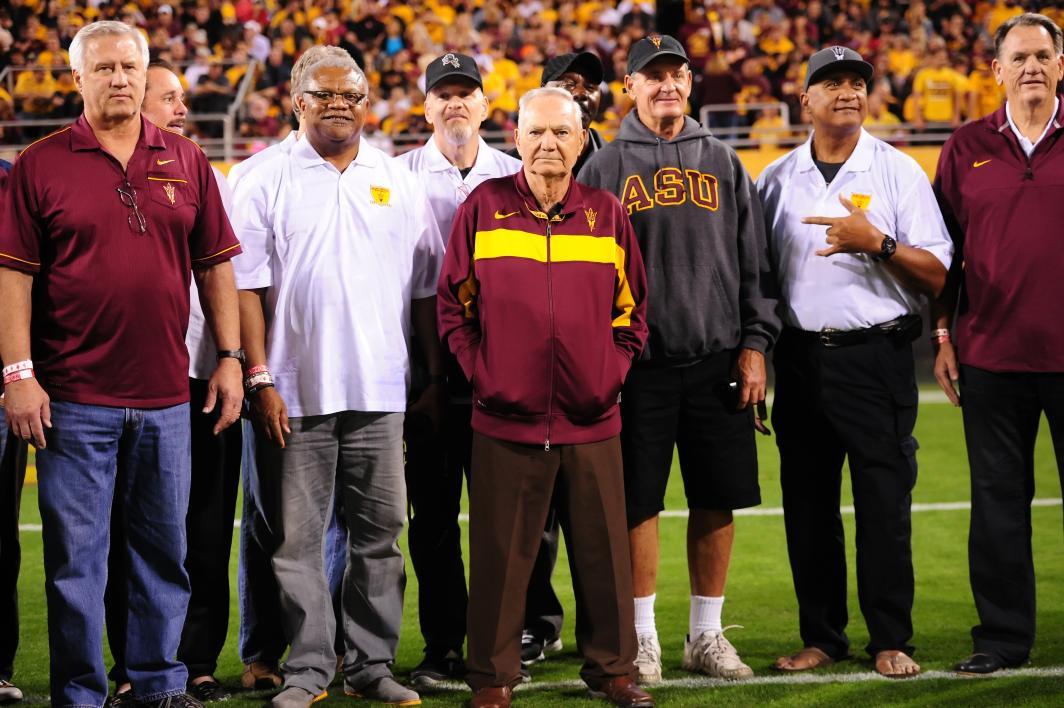 After his coaching career ended in 1979, Kush went back to ASU 21 years later and served as a special assistant to the athletics director and then as an ambassador for Sun Devil Athletics.

Read the full story about Kush and his impact on the university on the Sun Devil Athletics site here.

In the players' words

In October 2011, Kush and players from his 1958–1979 teams gathered at ASU for the Legends Luncheon. Watch the memories and hear what players had to say about their coach.

What's in a name?

In the late 1950s, efforts were afoot to change Arizona State College's name to Arizona State University. There were strong feelings on both sides.

Kush was among those who played a key role in drumming up support for the "university" change. Hear Kush and others speak about what it was like during that time.

When the United States withdrew from the Paris climate agreement earlier this month, it ignited a debate over what should happen next to address the inexorable changes in our environment.That debate was taken up by the Julie Ann Wrigley Global Institute of Sustainability at Arizona State University with three experts who approached the issue from distinct viewpoints.The panel discussion, held June... 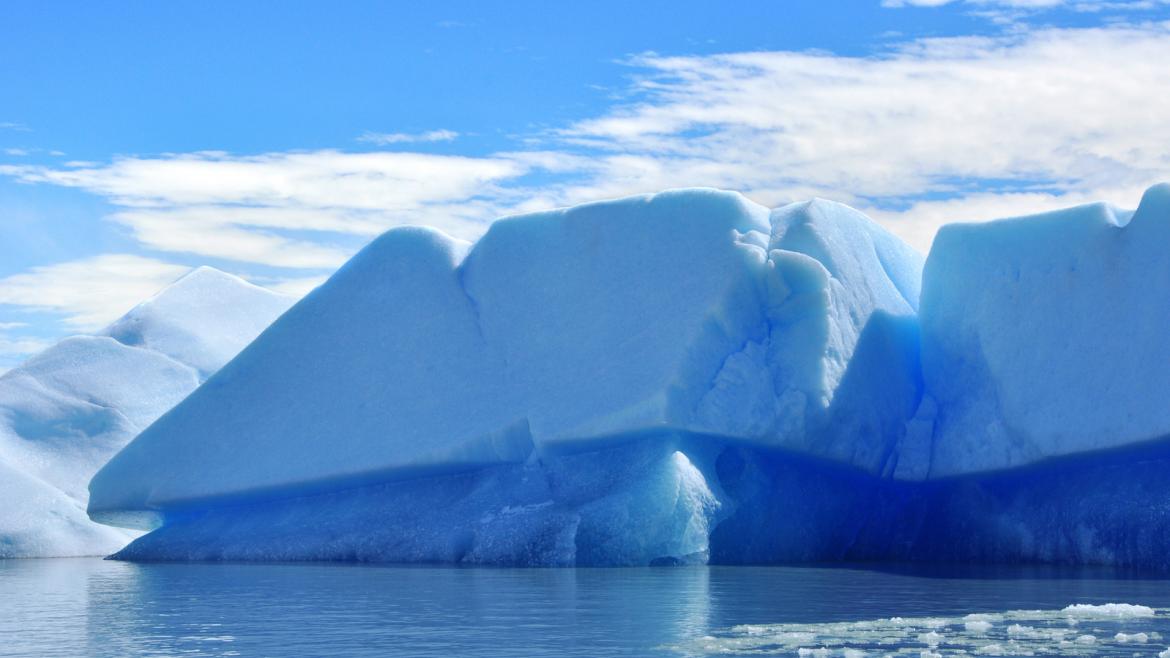 Phoenix mayor joins ASU panelists from sustainability, economics fields who have opposing views on value of US commitment

When the United States withdrew from the Paris climate agreement earlier this month, it ignited a debate over what should happen next to address the inexorable changes in our environment.

That debate was taken up by the Julie Ann Wrigley Global Institute of Sustainability at Arizona State University with three experts who approached the issue from distinct viewpoints.

The panel discussion, held June 21 at ASU's Downtown Phoenix campus, was moderated by Rob Melnick, executive director of the institute and a professor of practice in ASU’s School of Sustainability. ASU faculty speak at the "Paris Departure: What Lies Ahead" panel discussion at the Downtown Phoenix campus on Wednesday. From left are Rob Melnick, executive director of the Julie Ann Wrigley Global Institute for Sustainability; Sonja Klinsky, senior sustainability scientist at the institute, and William Boyes, founding director of the Center for the Study of Economic Liberty at ASU. Photo by Charlie Leight/ASU Now

In December 2015, 195 countries signed the agreement, committing to voluntarily reduce carbon emission. Afterward, 147 countries ratified the pact, including the U.S. — although it was sanctioned by then-President Barack Obama, not Congress. On June 1 of this year, President Donald Trump withdrew the U.S. from the pact. Individual cities cannot technically sign the agreement, but in the United States, 330 cities — including Phoenix, Tempe, Flagstaff and Tucson — have committed to the goals of a 26 to 28 percent reduction in carbon emissions by 2025.

“The nations got together not to debate whether there was a changing climate. The question was, what can nations do about it?” said Melnick, who asked each panelist to summarize their starting positions.

Sonja Klinsky, senior sustainability scientist in the Julie Ann Wrigley Global Institute of Sustainability and assistant professor in ASU’s School of Sustainability: “One thing we have to remember is that that we can’t actually leave the globe. We have to work together. It’s not just about climate — when you have an agreement, it affects how you work with a variety of other issues. It was entirely voluntary for every country and it was completely universal, except for Syria and Nicaragua.”

Greg Stanton, mayor of Phoenix: “Even when President Obama signed us up for the Paris accord, mayors knew it would be up to cities to meet the requirements. He may have taken credit for signing on, but we knew it would be local communities around the country that would do the heavy lifting. Our chief sustainability officer has a very ambitious 2050 climate action plan that will make Phoenix carbon neutral in that time.”

William Boyes, founding director of the Center for the Study of Economic Liberty in the W. P. Carey School of Business at ASU: “With this issue, which is so emotionally hot, the seen overrides the unseen. The seen is the seas rising and ice melting, but what we don’t look at is the costs to implement something like the Paris accord. The decline in the number of jobs in the United States would be 600,000 by 2035. Income loss of $20,000 per family of four by 2035. Those are devastating impacts for something that would have a benefit of .03 degrees Celsius at best.”

Highlights from the discussion

Question: Were there economic arguments for countries to sign onto the Paris accord?

Klinsky: Does anyone know what per-person emissions are in the U.S. now? It’s around 22 tons per person. In China, it’s about six tons. In India, it’s around two. For most of Africa, it’s less than one. China is starting much lower and will peak at less than half of emissions per person than we will. So far, when China has made promises they’ve kept them in the climate space because they are so vulnerable to climate change. 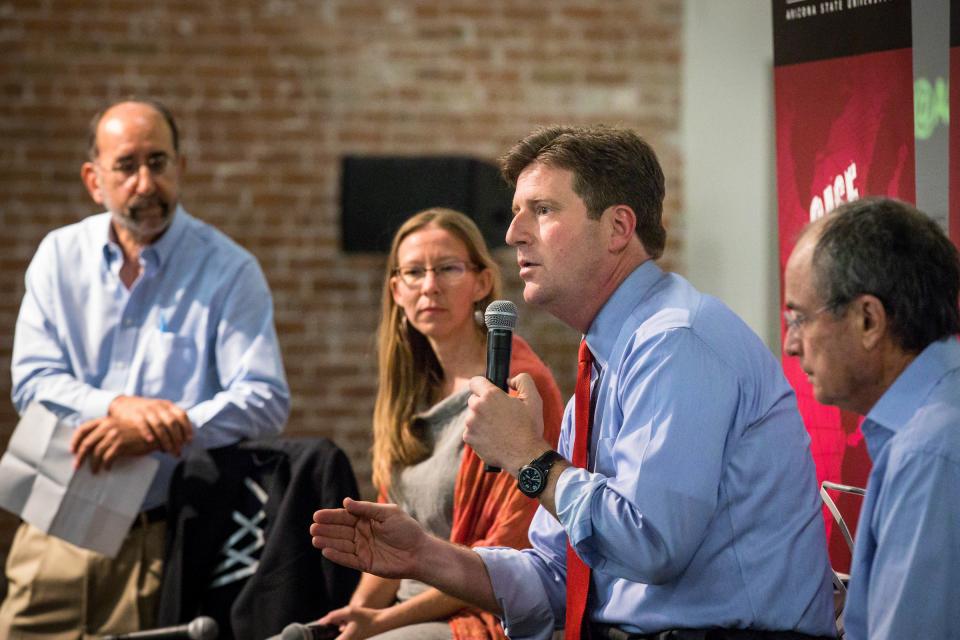 Stanton: Phoenix took the lead in investment in light rail in our community. Now we have $9 billion in private-sector investment. If we only look at it as a dollar-for-dollar thing, the cost of not being successful is too great.

Q: While President Trump has taken one position, many cities are making their own commitments. What effect does this have?

Stanton: The city-federal relationship is certainly at its lowest point right now since I’ve been involved in public life. It’s not going to change a thing about how we implement public policy.

Klinsky: For the first time, many city governments were included in many international delegations to participate in negotiations, which is an important element of how we think about how we’ll govern — to recognize the power of local government.

Q: If you support the agreement, what’s bad about it? If you don’t support it, is there anything good about it?

Klinsky: The Paris Agreement cannot say very much about how we deal with vast domestic inequality. There are communities in America where if we took away their main source of revenue, a coal power plant, we have no idea how to deal with them. There is a gaping hole that does not clearly listen to the needs of the lowest-income members of a country.

Stanton: I would say the biggest weakness is that it doesn’t allow mayors to directly sign on. It would have a level of commitment form the participating countries that the rest of the world could better rely on.

Boyes: I worked in very poor countries like Botswana and China 30 years ago, and I have a strong belief in allowing individual freedom and with that freedom, they’ll innovate. One of the problems with this agreement, and so I don’t think there is anything good about it, is that the government dictates what the individual can do.

Q: What about carbon fees?

Klinsky: I think it’s a great idea. There are many ways of putting a price on carbon. By creating some kind of a cost that recognizes that we should not treat our resources as though they have no value — what could be more valuable than our atmosphere? — you are creating a system where companies are incentivized to innovate.

Boyes: It’s an issue that economists have been involved with for a long time. It’s a real possibility. If the government makes something free, everybody overuses it.

Q: How do we move forward on climate change without increasing the partisan divide?

Boyes: I think the example is fracking. That has had the biggest impact on declining emissions in the U.S. than any other event and it’s not government-run or -controlled. It’s actually restricted by the government. If there’s a profit, individuals will jump in and innovate.

Klinsky: I think we’re swimming with opportunities. There are large-scale technological investments. The cost of air pollution to people’s health is astronomical. That’s a public health debate. There’s a social justice perspective. How will we deal with agriculture? Find your skill set and apply it.

Stanton: For some reason this became a partisan issue for a while, but I’m an optimist that this will become a bipartisan way to move forward.