The Surdna Foundation awarded a $250,000 grant to the Herberger Institute for Design and the Arts at Arizona State University as part of its Thriving Cultures grant program.

The Surdna Foundation seeks to foster sustainable communities in the United States – communities guided by principles of social justice and distinguished by healthy environments, strong local economies and thriving cultures. Its Thriving Cultures program celebrates the belief that “communities with robust arts and culture are more cohesive and prosperous, and benefit from the diversity of their residents,” according to the Surdna website.

The grant was awarded to support the Creative Communities Institute, a partnership with the Arizona Commission on the Arts and prototype for a comprehensive strategy to cultivate, facilitate, measure and visualize new intersections between the arts, ASU, and the larger communities of Arizona.

Kenja Hassan is a champion of diversity at Arizona State University. She is passionate about creating connections between the university and diverse communities throughout the state of Arizona.Hassan, director of community relations on the Downtown Phoenix campus, started the State of Black Arizona (SBAZ) — a continuous report on the status, issues, concerns and achievements of African-Americans...

Kenja Hassan is a champion of diversity at Arizona State University. She is passionate about creating connections between the university and diverse communities throughout the state of Arizona.

Hassan, director of community relations on the Downtown Phoenix campus, started the State of Black Arizona (SBAZ) — a continuous report on the status, issues, concerns and achievements of African-Americans in Arizona — in 2008. The report creates an ongoing connection between the state’s African-American community and Arizona State University. 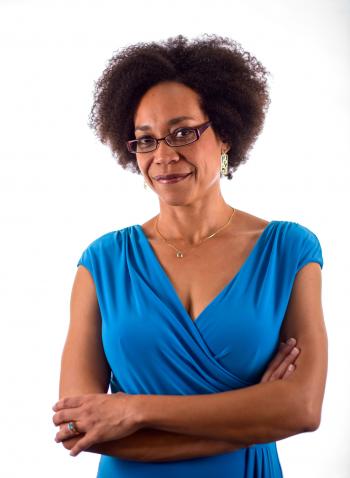 “It is the biggest honor and it is huge. There couldn’t be anymore of a meaningful way for me to be acknowledged,” said Hassan.

Hassan says that SBAZ has been her most tangible work here at ASU. She hoped that through this project people would be able to engage in meaningful dialogue, feel connected to their roots and to ASU. Most importantly, SBAZ recognizes the work of community members through the luminary awards.

“Kenja has been engaged with the State of Black Arizona since its inception and there’s no one better at visualizing a concept and making it happen,” said Angela Creedon, associate vice president of ASU’s Community and Municipal Relations and one of Hassan’s nominators for the award. “She is a strong and thoughtful leader who is passionate about her support of our community and rarely seeks praise for her work.  This recognition is well deserved.”

The program continues to thrive. Hassan launched SBAZ as part of a project for ASU, but now more communities continue to create their own reports. Faculty members, staff and students have started other reports on the Asian-American and Pacific Islander, Latino, Indian Country and LGBTQ communities.

“The fact that so many communities wanted to come together and have something like this was amazing,” said Hassan.

Hassan continues to build communities for ASU and within the community. She has orchestrated forums for ASU in Washington, D.C. and other cities, which engage experts from across the country on issues of pressing importance. She has also established an African and African-American Faculty and Staff Association at the university and currently serves on the board of Asian Pacific Community in Action and the Arizona Community Foundation’s Black Philanthropy Initiative Task Force.