Cocaine trafficking in Central America, a long-known and often discussed topic, is having a surprising impact — shrinking tropical forests.

A recent study, published in the journal Environmental Letters, estimates that up to 30 percent of the region’s tropical forest has been cut down and cleared out over the past 10 years as a by-product of the drug trade. 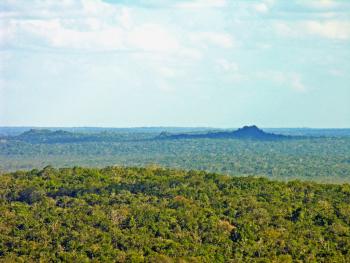 “Drug trafficking not only affects areas where drugs are produced or consumed but also areas of transit,” according to Karina Benessaiah, a doctoral student with Arizona State University’s School of Geographical Sciences and Urban Planning and one of the paper’s co-authors.

Large, rapid forest clearings correlate with the movement of drugs through the region, particularly in Caribbean Honduras, Guatemala and Nicaragua.

“Over the same period of rapid deforestation, U.S.-led supply-side militarized interdiction drug policies that target the production and movement of drugs has pushed cartels from flying planes into Mexico and into overland, air and marine routes in Central America to move the cocaine northward,” said Elizabeth Tellman, also a co-author of the paper and doctoral student with the ASU’s School of Geographical Sciences and Urban Planning. “Interdiction pushes the movement of drugs into remote, forested regions of Central America.”

It’s not just the movement of the cocaine that is impacting the forest. The money produced from the drug trade also leaves its mark on the land. “An estimated $6 billion of illegal profit is left in Central America as a result,” said Tellman. “This money needs to be legitimized, or laundered, and it is often done so by converting forest into other land uses, like oil palm production and cattle ranching.”

Swaths of land across the region disappearing could create irreparable changes to the ecosystem. The region, known as the MesoAmerican Biological Corridor, is home to 7 to 10 percent of the world’s endemic species. It is estimated that between 30 percent and 60 percent of the deforestation is taking place within biodiverse and internationally protected areas.

“Drug trafficking — and the cat-and-mouse game between traffickers and law enforcement in the war on drugs — affects local people and the environment,” said Benessaiah. “Forests are lost, and that matters for conservation but it also matters because people are losing their livelihoods.”

The region is home to more than 80 ethnic groups and many impoverished farmers who depend on the land for survival. The high rate of deforestation poses a direct threat to these groups’ livelihoods and security.

According to the researchers, the “war on drugs” has only exacerbated the issue and pushed the drug trade deeper and deeper into the forests. Their proposed solution? Environmental policy and drug policies can no longer live in silos.

“Conservation policy must be better aligned with drug policy, with the recognition that supply-side interdiction efforts may cause severe environmental damage in this biologically and ethnically diverse, sensitive region,” said Tellman.

You can read their full paper in the May 2017 issue of Environmental Research Letters.

Photo used is courtesy of Dennis Jarvis, licensed under CC BY 2.0.

ASU student learns how to give justice to the hungry

The word “justice” evokes thoughts of courtrooms, police officers, lawyers and judges for most people. But Arizona State University student Alexa Kirkpatrick thinks of justice more often in terms of food.“I’ve always been really interested in the culture of food. I think it’s a very fascinating and a very relevant subject that affects everyone,” she said. “Aside from the fact that yo...

ASU student learns how to give justice to the hungry

“I’ve always been really interested in the culture of food. I think it’s a very fascinating and a very relevant subject that affects everyone,” she said. “Aside from the fact that you literally need food to survive, there’s something really important to the ways we preserve food or withhold food from certain people without realizing it.” 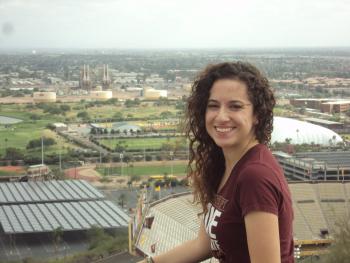 Alexa Kirkpatrick is working on her masters in justice studies in the School of Social Transformation. Download Full Image

In 2013, Kirkpatrick received a Bachelor of Interdisciplinary Studies with a focus on justice studies and chemistry from ASU. After a couple years in the workforce, she decided to pursue a master’s degree in justice studies with an emphasis on “food justice” from the School of Social Transformation in the College of Liberal Arts and Sciences.

When Kirkpatrick decided to attend graduate school, she had a daughter and was working full-time. She said striking a balance between work, school and family is difficult. But, as a lover of food, she still finds time to learn new recipes and pursue her research interests.

Part of Kirkpatrick’s focus in graduate school is the institutional barriers underprivileged communities face in securing access to enough food. She said she’s also fascinated by the culture of food and its importance to communities. These two interests combine in an environment in which she said the primary goal of many of the students is to find a way to help.

“It’s hard not to be increasingly sympathetic to people who don’t have food. And it’s people who you may share classes with and you don’t realize. And that’s something really important for people in the School of Social Transformation. People here really care about other people. There’s a strong humanitarian tie to whatever we’re studying. Just because I might be able to afford food one week, doesn’t mean I should stop fighting for people who can’t.”

Kirkpatrick also said there are many misconceptions about land development, which directly contributes to the scarcity of food for certain people. She said one of these is the view that development and progress happen through urbanization; that is, the conversion of farmland to urban land.

She also said it’s necessary to question whether development and progress equal prosperity for any given community. The communities in question often can’t speak for themselves because they lack the influence to do so.

“People have these needs every day, all around the state and around the nation,” she said. “Giving a voice to people who find it difficult to speak for themselves is probably one of the most important things that I’m trying to pursue.”

Kirkpatrick said she’s been most appreciative of ASU’s resources. The School of Social Transformation has helped her get in touch with the right people in order to be successful. Specifically, for her upcoming master’s project, Kirkpatrick needs to find a project committee, which will oversee its progress. She said her professors have helped her get in touch with people to be on the committee.

“I really have enjoyed the networking possibilities that are made available specifically because of ASU,” she said. “If you need help or if you need resources, someone is there whether or not it’s the person that you initially go to. They can help you connect with other people. It’s like a huge web, a huge network of people who are dedicated to a really similar goal.”

In the meantime, Kirkpatrick doesn’t know exactly what her future looks like post-graduation. She said she’s planning to work in community engagement, with the intention of facilitating programs to make food more readily available to underprivileged communities. She said she might return to ASU for a doctorate in the future.

“I don’t exactly know what kind of career I might go into, but the pursuit of knowledge has been the most worth-it cause I’ve ever pursued,” she said.