What is South Phoenix? Students, ASU prof attempt to find out and celebrate it.
May 23, 2017

The way Alberto Rios tells it, it’s like it was fated to happen: He was going to lead a public art project to celebrate South Phoenix, but he didn’t know how until “it occurred to me that we could play the street.”

The idea that turned into the performance event “Story Days: Music in the Landscape” came together after a year of work that started when Rios, ASU Regents’ Professor of English and Arizona’s inaugural poet laureate, recruited Jenny Irish, assistant director of the university’s creative writing program, and a group of students to be his “army of 100 ears.”

The team set off on various excursions throughout the city to listen, observe and record. During some of those first explorations, Rios began to notice certain imagery: birds perched on telephone wires; tomatoes lying in furrows in Harmon Park; the eyes of masked lucha libre wrestlers in a wall mural — they all looked like musical notes.

It came to fruition recently when students at Dunbar Elementary on Seventh Avenue and Grant Street played piano pieces they had composed based on photos taken in and around the area.

“Whatever you think of South Phoenix, it is ours,” Rios said. “When they play this music, they touch place. This is them; they are playing their world.”

He and his team found their way to Dunbar Elementary after overhearing children at parks. They were unfiltered and honest, and could provide a unique perspective on how the community viewed itself.

Rios connected with the school and knew the students shared his vision when a few of them pulled a friend up to the front of the classroom and told her to frown. Wrinkles appeared across her forehead, and dotted along the lines were freckles: Music, they told him.

And so they were off, taking their own photos of music in the landscape. Photos of rocks lying in scored lines of cement. Photos of bananas with stickers in neat rows at a supermarket. Photos of bouncy balls in tidy metal cages. 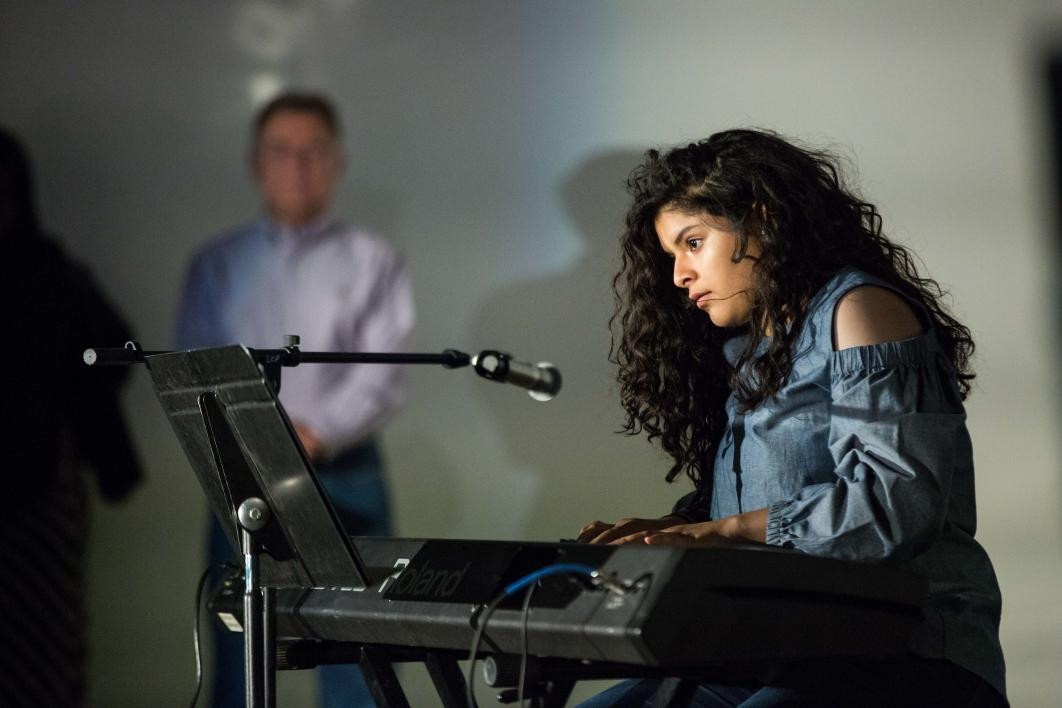 Dunbar Elementary eighth-grader Emely Tinoco plays her piece, "Skyline Over the Moon," at the performance event "Story Days: Music in the Landscape." Creative writing MFA student Marco Pino outside Harmon Library in South Phoenix during a July 2016 excursion to listen, observe and record the sights, sounds and smells of the city. He pointed out how musical notes can be seen in the square blocks on the wall. 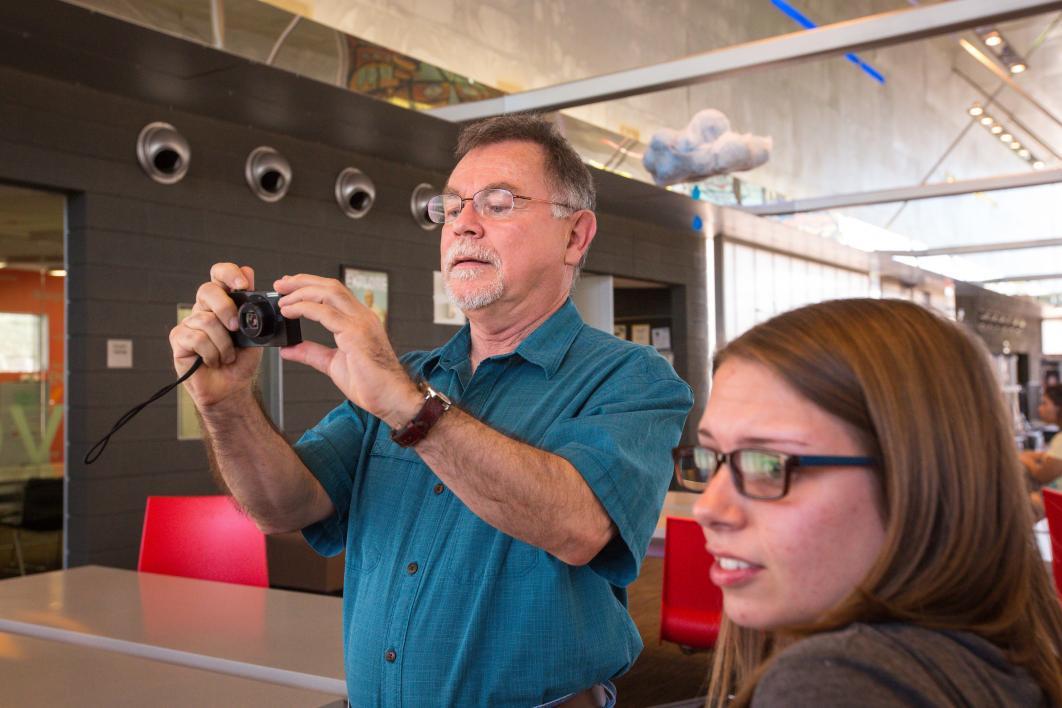 Over time, they converted what they saw in the photos into notes, and then into songs.

Eighth-grader Emily Tinoco performed a piece she titled “Skyline Over the Moon.”

“I really liked the concept of making music out of things we see every day,” she said.

What came out of the speakers as other students played on May 17 was sometimes somber and sometimes uplifting.

The project was funded by the National Endowment for the Arts Our Town Grant, and coordinated by the City of Phoenix Office of Arts and Culture Public Art Program.

Gail Browne, executive director of the Phoenix Office of Arts and Culture, said it was a great opportunity to “explore the connections of Phoenix residents to the places in which they live.”

Though the focus of the performance event was music, there were other elements to the project.

From the beginning, he knew language would play a part in it, which was the initial reason behind his “army of 100 ears” in the form of ASU student volunteers.

Greguerias are short, witty or philosophical statements, popularized by Spanish writer Ramón Gómez de la Serna. Rios read some of them aloud at the event:

“Ocotillos and porcupines are cousins.”

“Gray was on sale the day they made South Phoenix.”

Some of the greguerias are to be set in concrete blocks in the city.

Sight and sound weren’t the only senses Rios and his team put to work; scent was a big part of the adventure.

Irish, a skilled perfumer, wanted to know what smells came to people’s minds when they thought of the city. Overwhelmingly, they told her about the smell of the dirt after it rains, and creosote bushes and orange blossoms.

One day at Harmon Library, Irish discovered they had a seed collection. She took some home and planted them, and as they grew, so did the project. When they were ready, Irish mashed them up to extract their natural oils and fragrances, which she passed out along with the new seeds they bore.

“When you plant seeds, they become something else. It’s the same way when you plant words,” Irish told those in attendance. “Like the seeds, now one thing becomes another.”

Her sentiment echoed that of Rios, who expects “Story Days” to have “far-reaching tentacles.”

“I hope this will have an impact well beyond tonight, and lead to new pathways toward solutions” for improving community pride and engagement, he said.

Rios concluded the evening with a serendipitous tale of the man Dunbar Elementary was named for. Paul Laurence Dunbar, it turns out, was a poet. And one of his most well-known poems, “The Dove,” reads as follows:

“Out of the sunshine and out of the heat / Out of the dust of the grimy street / A song fluttered down in the form of a dove / And it bore me a message, the one word — Love!”

The top scientific institute in the Netherlands, the Amsterdam Institute for Advanced Study (IAS), has announced that it will sponsor Adam Nocek’s Geomedia research project. Nocek, an assistant professor in the School of Arts, Media and Engineering, will be a fellow at the IAS this coming year. “This bolsters Arts, Media and Engineering’s worldwide profile as a unique site for transdisciplin...

The top scientific institute in the Netherlands, the Amsterdam Institute for Advanced Study (IAS), has announced that it will sponsor Adam Nocek’s Geomedia research project. Nocek, an assistant professor in the School of Arts, Media and Engineering, will be a fellow at the IAS this coming year. 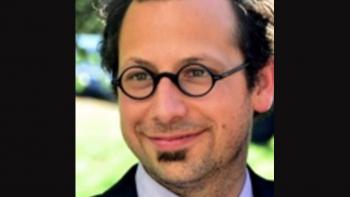 University News Herberger Institute for Design and the Arts School of Arts, Media and Engineering