When Sophie Olson started working toward her engineering degree in 2013, she didn’t think she would graduate until 2020. 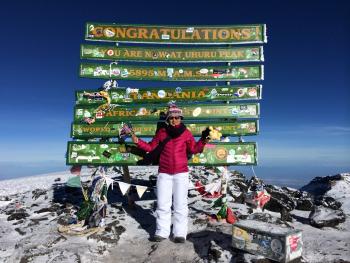 Sophie Olson stands atop Mount Kilimanjaro in Africa at the completion of the first marathon in her seven-continent marathon tour. From 2013-2016, Olson ran seven marathons, one on each continent, while working full time and pursuing her bachelor's degree in materials science and engineering. Photo courtesy of Sophie Olson Download Full Image

If it seems like seven years is a long time to finish a bachelor’s degree, try doing so while working full-time and raising three children — and running a marathon on all seven continents. Needless to say, Sophie Olsen knows a thing or two about perseverance: She will be walking in this spring’s convocation ceremony.

Though she had always been interested in engineering, Olson took a what she describes as a “standard route” in education, earning her bachelor’s degree in English literature from Aoyama Gakuin University in her native Japan. In 1992, she completed a master’s degree in political science from Florida State University.

She returned to Japan to work for Amkor Technology, a semiconductor product packaging and test services provider, and hoped to someday return to the United States. In 2005, she got her chance, and relocated to Chandler to work in Amkor’s business operations department.

Olson recalls that it was tough starting over in a new place, but fortunately her children — ages six and eight at the time — were well-positioned, having attended an international school in Japan.

While working for Amkor in Arizona, she became interested in product development, but such positions required an engineering degree. So in 2011, she started taking community college classes, slowly working toward attending a four-year university.

“I took a few credits at a time, but eventually I ran out of classes to take, so I transferred to ASU,” she said.

Though she says she “had a clear goal to become an engineer,” Olson was unsure what degree program to pursue, but eventually settled on materials science and engineering, enrolling in the Ira A. Fulton Schools of Engineering.

“I didn’t know much about materials science — but looking through the programs, to be in any kind of product development, you need to understand the fundamental, atomic-level ways things work and change,” Olson said.

At ASU, Olson continued taking a few classes at a time, decided she wanted to graduate at the same time as some of her fellow classmates.

“I missed seeing the same people, and I was motivated to try and graduate with the friends I’d made,” she said.

While still working full time, she committed to 18 credit hours in fall 2016, advancing her projected graduation considerably. She’s kept up the high-intensity workload, but she says it wasn’t easy.

Olson, however, is no stranger to pushing her limits. From 2013 to 2016, she ran a marathon on each continent. What started as a challenge to get back in shape after giving birth to her third child grew dramatically in scope.

“While I was running [the Phoenix Women's Half Marathon in 2013], a woman I spoke with mentioned she was running a marathon on each continent,” Olson said. “I thought, ‘that sounds fun.’ So I decided to do it too.”

And she did, running races in between semesters. Her first took her to Africa, where she ran up Mount Kilimanjaro, followed by marathons in Chile, Antarctica and New Zealand, which she counted as close enough to the Australian continent. Her final three marathons brought her back home for the Rock 'n' Roll Arizona Marathon, then to Belgium and finally finishing her quest at Cambodia’s Angkor Wat Marathon.

While Olson’s determination is also reflected in her academic career, she credits the support systems at ASU as a driving force in helping her graduate.

“If I hadn’t gone to school here, I don’t think I could have graduated,” Olson said. “The support system is so good and thorough and my advisor kept me on track. Whenever I needed help, it was always easy to find it.”

Olson has used her marathon running to inform her approach to education, displaying a similar tenacity in her studies.

“Everybody knows how to run, but you need to train for four months before the race if you want to pass the finish line,” she said. “Same with school work, you learn at lectures, but if you don't practice — do homework or study for a test — you will not be able to answer in the exam.”

Olson’s capstone team was tasked with developing an innovative method to deposit thin metal films onto a ceramic substrate using 3-D printing, but they were unable to find a commercial printers capable of doing so, according to Adams.

“So, her team designed and built their own 3-D printer, and demonstrated that it could work.  Overall, she demonstrated hard work and good perseverance with a difficult and sometimes frustrating project,” Adams said. “To put this in perspective, typical metal printers cost $100,000 to $1 million, and they built their pilot for under $1,000.”

Engineering runs in the family

Seeing the value in engineering, Olson encouraged her two oldest children to look into it as well. Now two of her three children — Kai and Mio Ozawa — are fellow students in the Fulton Schools, pursuing their undergraduate degrees in aerospace and chemical engineering, respectively.

Both are students in Barrett, The Honors College, and work as community assistants on campus. Kai is in ROTC and plans to join the U.S. Armed Forces when he completes studies for his degree. Olson says Mio, a freshman, is enjoying chemical engineering so far.

As Olson prepares for graduation, she offers the following advice to her children:

“I want them to keep going. There is no end for your academic endeavors — graduation is one of the points,” she said. “Regardless of what they do, I want them to not quit once they started.”

After all, life is a marathon, not a sprint.

More than 200 third, fourth and fifth grade students participated in a career event at Laveen Elementary School called “Above and Beyond.” The goal of the event, hosted by Access ASU, was to get these students thinking about their career interests and spark academic awareness at an early age."We are going ‘Above and Beyond’ promoting college prep so these students can have the tools they n...

'Above and Beyond' sparks career interests, academic awareness

More than 200 third, fourth and fifth grade students participated in a career event at Laveen Elementary School called “Above and Beyond.” The goal of the event, hosted by Access ASU, was to get these students thinking about their career interests and spark academic awareness at an early age.

"We are going ‘Above and Beyond’ promoting college prep so these students can have the tools they need to succeed and thrive later in life,” said Tenecia Placide, Access ASU AmeriCorp Outreach Coordinator. 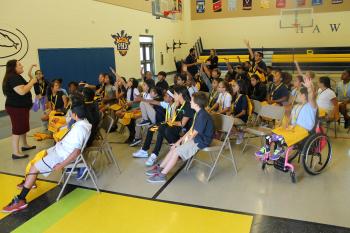 Students try to outbid each other for characteristics they believe best define them during Tuesday’s Above and Beyond event at Laveen Elementary. Download Full Image

Arizona State University alumni volunteered to speak to groups of the elementary students about a time in their life when they had to find the strength to persevere.

“To have someone who went to college and found success come in, besides their teachers, and say, ‘This is where I was, this was my path, and now this is where I am’ is so important.” said Robert Caplinger, Laveen Elementary principal .

The alumni also engaged with students in a variety of hands-on activities demonstrated how they find success in each of their careers by following their dreams. They also worked with the students of Hawk Nation to understand how to face personal fears and to overcome challenges they may encounter.

“The students need to be able to look forward and learn from role models how they’ve been successful. Most of our students come from families who didn’t go to college, so there’s nobody at home telling them how they can make it to college,” Caplinger said. A group of Laveen Elementary students volunteer to share a fear they had to overcome during Tuesday’s Above and Beyond event.

Nearly three-quarters of the Laveen Elementary student body is eligible for free or reduced lunch and more than half identify as Hispanic.

“It’s never too early to start talking to students about their future. Students asked great questions of our ASU alumni working in various fields including engineering, psychology and the law,” said Sylvia Symonds, vice president of educational outreach at ASU.

“Laveen Elementary is full of Future Sun Devils and we are proud to help students begin to explore college and career.”

Written by Will Argeros