Cassie Johnson was a self-described troublemaker growing up. 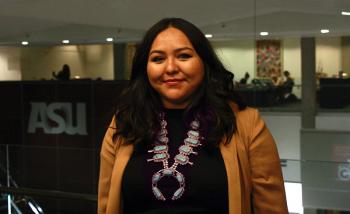 Cassie Johnson is the Spring 2017 Outstanding Graduate of the School of Criminology and Criminal Justice. Download Full Image

“I would test the authority figures in my life and was in trouble on and off,” she said.

She got in enough trouble as a teenager to spend time in the juvenile justice system. She also had a drinking problem and became a victim of teenage domestic violence.

So family and friends might have been a little surprised that she chose to pursue a criminal justice degree. She is the Spring 2017 Outstanding Graduate of the School of Criminology and Criminal Justice in the College of Public Service and Community Solutions in downtown Phoenix.

“When I was going through that phase, I couldn’t relate to anyone who was trying to talk to me — counselors in school, probation officers. It would shut me down,” Johnson said. “I want to fill that gap for others and do something better.”

In January, Johnson began working for a well-established Girl Scout program that helps at-risk girls in communities throughout Arizona by teaching decision-making and leadership skills.

“We work with girls who are on probation, mothers who are incarcerated — it is closely related to criminal justice and has given me a new perspective on this degree,” she says. “It isn’t so black and white. You don’t have to go straight into law enforcement to make a difference.”

Johnson doesn’t immediately share her own experiences with the girls, but says as they ask questions she can feel them open up. It breaks down the wall that she felt growing up in Page, Arizona.

She readily admits her first attempt at higher education failed. Lack of maturity, poor decisions and heavy drinking caused her to drop out her freshman year and move back home. That’s when Johnson made a conscious decision to turn her life around. She stopped drinking, ended negative friendships and made a commitment to a positive lifestyle that included going back to school.

It wasn’t easy. For one and a half years, she drove two hours each way to attend classes at Coconino Community College in Flagstaff. But it paid off. Johnson earned All-Arizona Academic Team honors before transferring to ASU to study criminology and criminal justice.

“At the beginning, it was hard to stay determined and keep focused. School taught me a lot about how to manage time. I wouldn’t trade the experience,” she says.

At ASU, Johnson added a second degree in public service and public policy offered by the College of Public Service and Community Solutions. As part of her capstone class, she did a synthesis on criminal disenfranchisement and the collateral consequences of criminal conviction.

“It hits close to home,” she admited. “I can feel the repercussions of a criminal background. Even today, I have to jump through hoops and obstacles to get my foot in the door.”

She says she wanted to know more about the collateral consequences of criminal conviction, even misdemeanors. How does that impact housing, applying for jobs, pursuing education? In particular, Johnson wanted to know where Native Americans fit in. As part of her work, it became clear that there is a lack of data.

At the end of the semester, Johnson wrote a letter to the leaders of the Navajo Nation, the tribal government based in Window Rock. She pointed out that Native Americans are overrepresented in the criminal justice system in Arizona. She noted issues that relate to Native Americans and the lack of research in this area.

“That might be what I want to do,” she says. “I want to do some sort of research and it is clear there is a need here.”

“Ms. Johnson’s story is inspiring and we’re extremely proud of what she has been able to accomplish,” said Cassia Spohn, director of the School of Criminology and Criminal Justice. “Her commitment exemplifies what this school is all about — looking for solutions to the problems that plague the criminal justice system.”

For Johnson, obtaining an advanced degree at ASU is part of the plan.

“In a way, some may see it as coming full circle. I started off doing so bad, and then to make that change and want to help others,” she said.

“From my own journey, I want others to see that it is not too late to make positive changes. It is possible. It may be hard, but it is possible!”

Emma Richburg never thought she’d be putting on an art show as a freshman criminology and criminal justice major. But she is helping put up drawings, paintings and other items for display at Unexpected Art Studio, a former warehouse on Polk Street located between Grand Ave and 7th Avenue. The works of art will be sold at the May 5 First Friday — the hip art, entertainment and food event that d...

Emma Richburg never thought she’d be putting on an art show as a freshman criminology and criminal justice major. But she is helping put up drawings, paintings and other items for display at Unexpected Art Studio, a former warehouse on Polk Street located between Grand Ave and 7th Avenue. The works of art will be sold at the May 5 First Friday — the hip art, entertainment and food event that draws thousands of people to Roosevelt Row and Grand Ave in downtown Phoenix each month.

But this art show will be different from the dozens of other exhibits First Friday patrons will encounter. This art was done by inmates serving time in the Arizona State Prison Complex in Florence. The exhibit is called "(Ink)arcerated: Creativity within Confinement." 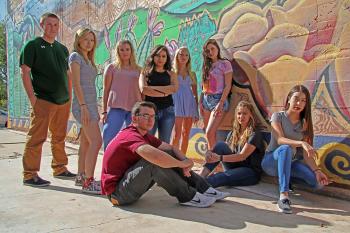 “We're going to try our best to display it in a very respectful and hopefully creative way where people will see it in a different manner and change their current mindset," Richburg said.

The mindset that Richburg is referring to is one in which people are locked up and forgotten.

“People think that once someone's put away the problem is stopped, that the issue is done,” she said. “People don't understand that the same person you're putting into a very hard system is going to come out into your community.

And that's what we're trying to change. We want to better them so when they come out and they have been rehabilitated and they will actually better the community that you, your family and everyone else living there.”

Richburg and her classmates are learning about incarceration as part of a new type of ASU course called Promod, which stands for “project-based modular learning.” There is no textbook, no mid-terms. Instead, freshmen learn about a particular community problem by becoming immersed in the topic and work as a team on a solution. In this case, at art exhibit.

Kevin Wright, an assistant professor in the School of Criminology and Criminal Justice, teaches ASU 140 “Prisons: Getting Out and Staying Out.” He took the nine students in the class on a tour of a state prison in Florence where they learned about what programs are offered inmates.

“We talked to the warden and we got to actually walk into a classroom of prisoners who were learning about drawing from a teacher,” Richburg said. “And there are other programs that allow prisoners to express their feelings in ways other than violence.” 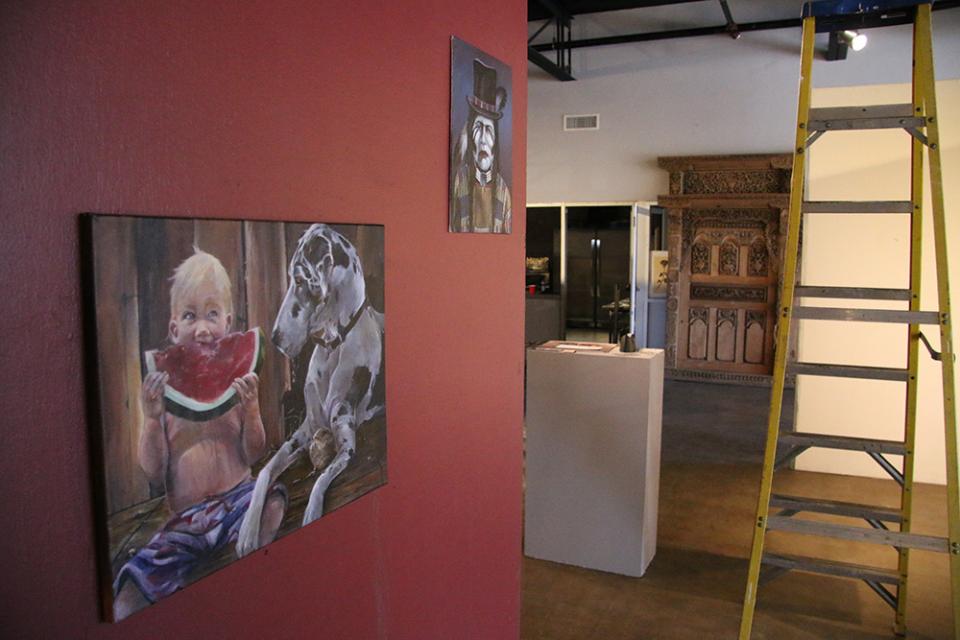 Art from the "(Ink)arcerated: Creativity within Confinement" exhibit.

“I knew when I was signing up for this class that we would have a field trip to the prison but I had no idea what that all entailed and that was kind of a reason we chose to do this,” student Madysen Genzmer said. “But once I actually experienced this class I realized that it's literally a once in a lifetime opportunity.”

Genzmer has since learned about the prison crisis in America. There are 1.5 million men and women in prison and 95 percent of them will be released. Yet, most go on to commit new crimes. A national study of 400,000 inmates released from prison found that within a three-year period two-thirds of them had been rearrested.

“A person only gets punished for so long and then they return to our communities,” Genzmer said. “And if they're not rehabilitated they're going to go right back into the same cycle and they're going to commit the crime again. So we need to rehabilitate and not just lock up and forget about them.”

Students created teams to work on various aspects of the show, including fundraising to pay for it. A crowdsource funding campaign raised more than $3,100 to rent the exhibit space and buy food for guests.

Genzmer says the art exhibit will allow students the opportunity to talk about the importance of programs that will help inmates once they’re released. But the show will do more than that. Students are selling the artwork. A small portion will pay for the supplies used to make the art, but all other proceeds will benefit the Pinal County Family Advocacy Center and Children First Leadership Academy.

“All the money that we're raising at the art show is going to two organizations, one for abused mothers and children and another for impoverished and homeless kids,” Genzmer said.