Megan Kelly is a graduating senior with a global studies degree from Arizona State University's School of Politics and Global Studies. Recently Kelly received the prestigious Fulbright English Teaching Award to Vietnam. The Fulbright English Teaching Award places native English speakers in classrooms throughout the world, allowing recipients to aid students who are learning English as a second language. 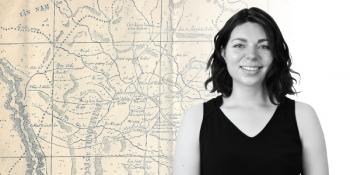 Kelly first heard about the Fulbright English Teaching Award as a freshman at ASU. After attending an informational session on the program, Kelly began to think about applying for the once-in-a-lifetime opportunity.

“After winning the award I mostly felt shocked and overwhelmed,” Kelly said.  “It still feels slightly unreal because I don’t know many of the details and have never been to Vietnam before. I definitely feel a mixture of excitement, nerves, and anticipation.”

Kelly prepared for the Fulbright English Teaching Award throughout her college experience, taking advantage of the many opportunities offered by the School of Politics and Global Studies.

“I was also able to participate in the McCain Institute Policy Design Studio in Washington D.C. for a semester, where we simulated the U.S. Vietnam Embassy for a semester, allowing me to create a strong connection to a specific country,” Kelly said. “This also led me to writing my honors thesis on geopolitics in the South China Sea, giving me the opportunity to learn even more about the region.”

When asked about what she looked forward to most in Vietnam, Kelly said she was excited to meet her soon-to-be students.

After finishing her work in Vietnam, Kelly plans to attend graduate school. While originally planning on a career track with the Foreign Service, Kelly is now considering a future career that involves international education, possibly through non-governmental organizations.

Illinois native finds plenty of opportunities to succeed at ASU

Editor’s note: This is part of a series of profiles for spring 2017 commencement. See more graduates here.Andrea Lichterman came to Arizona State University to study event planning. She leaves having accomplished so much more. Lichterman is the spring 2017 outstanding graduate for the School of Community Resources and Development, part of the College of Public Service and Community Services, i...

Illinois native finds plenty of opportunities to succeed at ASU

Andrea Lichterman came to Arizona State University to study event planning. She leaves having accomplished so much more. Lichterman is the spring 2017 outstanding graduate for the School of Community Resources and Development, part of the College of Public Service and Community Services, in downtown Phoenix. 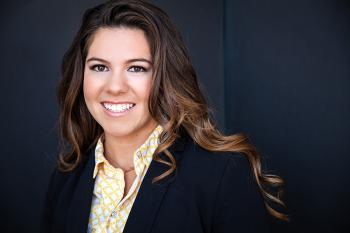 Andrea Lichterman is the outstanding graduate of the School of Community Resources and Community Development. Download Full Image

“I came from a small town that reeked of wheat and cows on hot summer days and was lost in how I would develop as a young professional at a school with 80,000 students,” said the Wauconda, Illinois native. “My biggest obstacle all along was myself and not giving myself the confidence that I could accomplish anything that I set my mind to.”

She proved otherwise. Lichterman made the Dean’s list every semester.  She earned a New American University Scholarship and became a Dean's Undergraduate Research Scholar. But her time at ASU was much more than a high grade point average and academic achievement.  The university provided the kinds of opportunities that sparked her passion and allowed her to excel.

One of her early achievements was being selected as the director of homecoming for the downtown campus. She planned the 2014 homecoming dance, the Sun Devil Royalty ceremony and managed a $25,000 dollar budget. 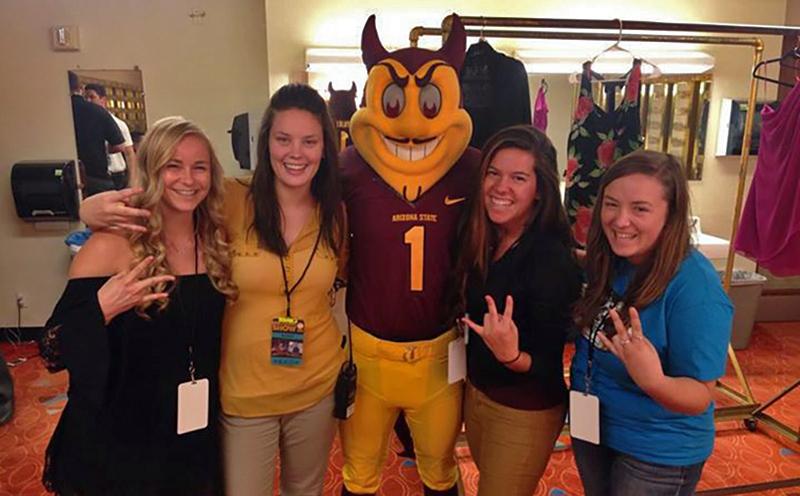 Lichterman and classmates with Sparky behind the scenes at 2014 ASU Homecoming Dance. From left to right: Kelsey Reade, Megan Moore, Andrea Lichterman and Grace Roberts.

“I never thought that as a sophomore I would be given such an amazing opportunity to plan a really important event,” Lichterman said. “The amount of career oriented opportunities and opportunities in general that ASU provides for its students to engage in is awesome.”

She continually proved to her peers that leadership is among many of her talents. She did such a notable job planning homecoming festivities, that she was promoted to vice president of the Programming and Activities Board, also known as PAB. And when Super Bowl XLIX was played in the valley in 2015, Lichterman supervised employees at the NFL Experience event, some of whom were three times her age.

“Since this experience, I’ve realized that leaders do not always have to be the ones delegating ideas or tasks,” Lichterman said. “Leadership is being able to hone in on a person’s skill set, so that they can gain confidence as a professional and continue to flourish within their destined interest.”

Lichterman worked a summer as a legislative marketing and events intern for a non-profit organization in Jackson Hole, Wyoming. One of her tasks was to interact with charter school principals getting them to advocate for a school choice bill in the legislature. It sparked a passion for public policy.

“I arrived that summer thinking I was only tasked with helping my boss plan her campaigns and conferences and distribute her marketing materials,” Lichterman said. “I left that internship having a passion for social change as I networked with legislatures from all over the western states about how essential charter schools are needed in rural areas such as Wyoming.”

Lichterman is wrapping up another internship. This one at the Arizona state capitol where she served as a research intern in the State Senate.

“I’m tasked with researching legislation that applies to social change issues that helps Arizona progress as a state,” she said. 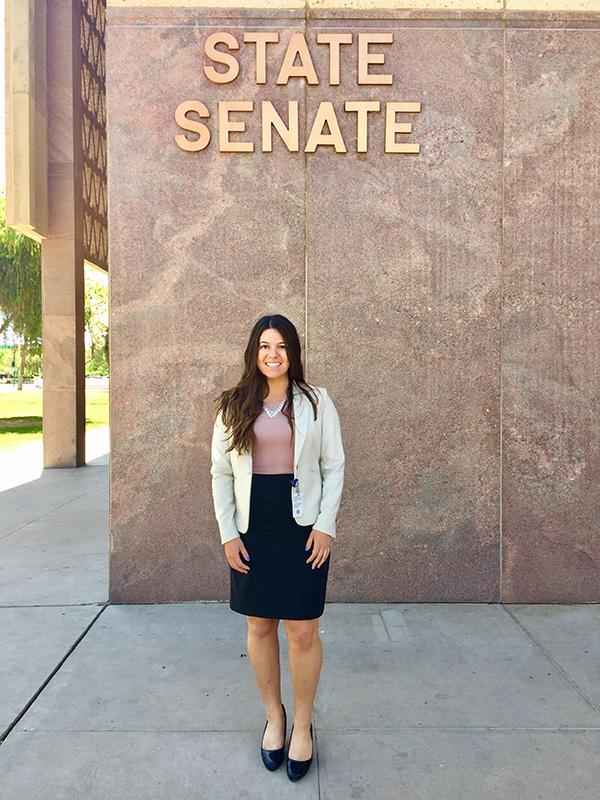 Andrea Lichterman interned as a research analyst at the Arizona State Senate.

As an undergraduate student, Lichterman conducted research to measure the perception millennials have towards the use of technology in outdoor recreation. She presented her findings at a professional conference.

"Andrea sought to better understand the attitude of her peers toward the use of public lands," said Gyan Nyaupane, an associate professor in the School of Community Resources and Development. "Andrea’s curiosity to learn and her ability to understand the complex social and environmental issues made her a natural fit for this research."

Lichterman also found time to compete for the Sun Devil Water Ski team, a sport she honed growing up on a lake in rural Illinois. And she’s been able to turn her fondness for the outdoors into a career focus with a degree in sustainable tourism. She is planning on a career in sustainable leadership and development.

“Through my studies, I’ve learned that there is tremendous opportunity for stewardship,” Lichterman said. “Knowing that our home is under more pressure than ever before, I plan to dedicate my career to meditating the gap between overconsumption and environmental ethics.”

Her fear of getting lost in the crowd at a large university never materialized. Instead, Lichterman became a stand out student and her school’s outstanding graduate.

“I was extremely humbled when they told me I had been selected, I had a tear in my eye,” said Lichterman. “It is really reassuring to know that all the work I have done has been not only noticed, but appreciated. And I am very grateful for the honor of representing my school.”