Jennifer Kahn is graduating from Arizona State University this May with a degree in political science as part of ASU’s 4+1 program, an accelerated bachelor’s and master’s major track. Before beginning her graduate studies, Kahn took part in the Arizona Legislative Internship Program. 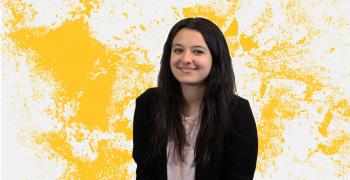 The Arizona Legislative Internship Program provides students with the opportunity to work at the Arizona State Capitol on various projects that range from data analysis to specialized knowledge on interest groups in the area. The experience influenced Kahn’s established ideas of the political system.

“I have always wanted to go to law school, ever since I was younger, and this experience really helped me understand the other side of the law,” Kahn said.

After completing this internship, Kahn went into the 4+1 accelerated graduate program offered by ASU, pursuing her master’s in political science. She was recently awarded the Warren E. Miller Research Paper Award from the School of Politics and Global Studies for her master’s thesis.

Her study consisted of two experiments with fictional advertisements that varied the gender of candidates and the “gender” of the advertisements themselves. The object of this study was to determine and understand how gender differences in the campaign may influence the way the public views male and female judicial candidates.

After graduating from the 4+1 program, Jennifer plans on attending ASU’s Sandra Day O’Connor College of Law, pursuing her childhood dream.

A sea of maroon and gold is a normal sight at Arizona State University — on Thursday, that sea spread to high school campuses across the Phoenix metro area as the ASU bus rolled out to welcome future Sun Devils to the ASU family.“Being the only university in the Phoenix metropolitan area, we want to be embedded in our community and we want to celebrate all these young people starting their fut... A sea of maroon and gold is a normal sight at Arizona State University — on Thursday, that sea spread to high school campuses across the Phoenix metro area as the ASU bus rolled out to welcome future Sun Devils to the ASU family.

“Being the only university in the Phoenix metropolitan area, we want to be embedded in our community and we want to celebrate all these young people starting their future at ASU,” said Brad Baertsch, director of freshman recruitment and admission.

Baertsch was one of the many ASU staff members and faculty along for the ride, congratulating students on their new adventure. For a second year in a row, ASU celebrated College Signing Day by visiting Valley high schools. The Future Sun Devil team will stop at six high schools over the course of Thursday and Friday. Combined, approximately 600 students from these high schools have been admitted to ASU.

Other students can see their friends celebrating going to college and see it as a possible path for them after high school, Baertsch added.

Student support specialist Rebecca Folk from Barrett, The Honors College at the Polytechnic campus said that being part of the event was really meaningful.

“This is the end of their high school career, but it’s also a starting point for the rest of their lives. It really means a lot for me to actually put faces to the names and welcome them to the next chapter,” she said.

ASU Now was along for the ride as Sparky and the team surprised high school seniors getting ready to become college freshmen. Students from Metro Tech High School in Phoenix hold signs showing their college choice in front of the ASU bus Thursday morning. These future Sun Devils have committed to attending Arizona State University in the upcoming fall semester, and the visit was part of the celebration of College Signing Day. Obama scholar Jennifer Salguero Martinez is all smiles as she makes her way into the College Signing Day festivities at Metro Tech High School on Thursday. Jose Ramirez poses with his mother, Maria, for a photo with Sparky at Metro Tech. 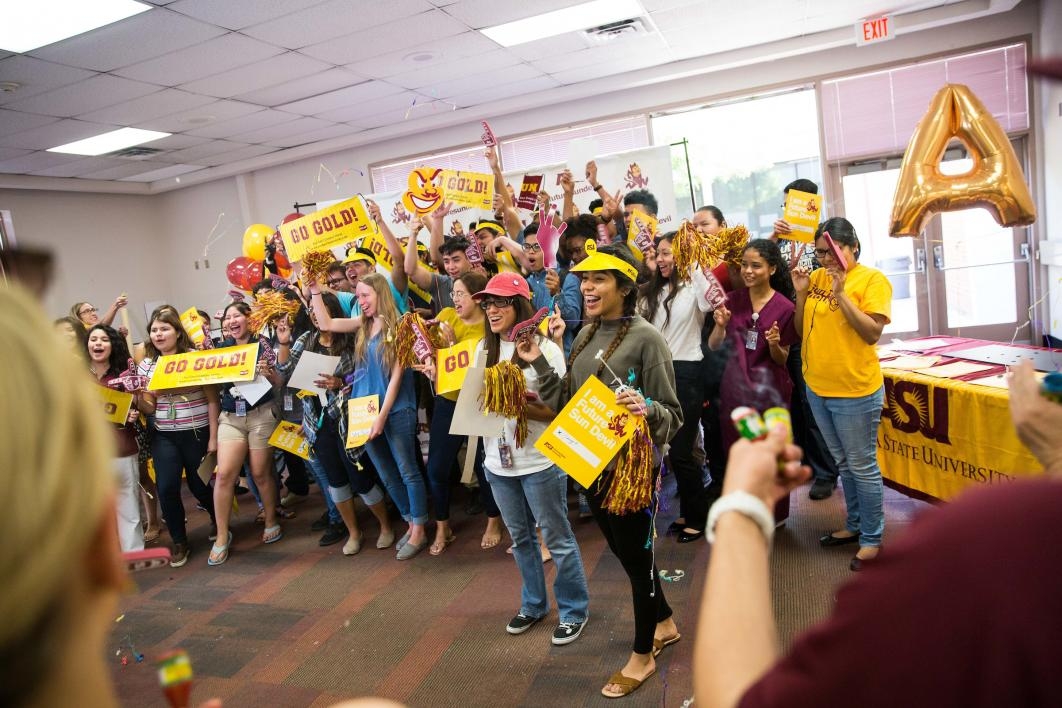 Metro Tech High School seniors give a cheer for their future at ASU on Thursday morning. 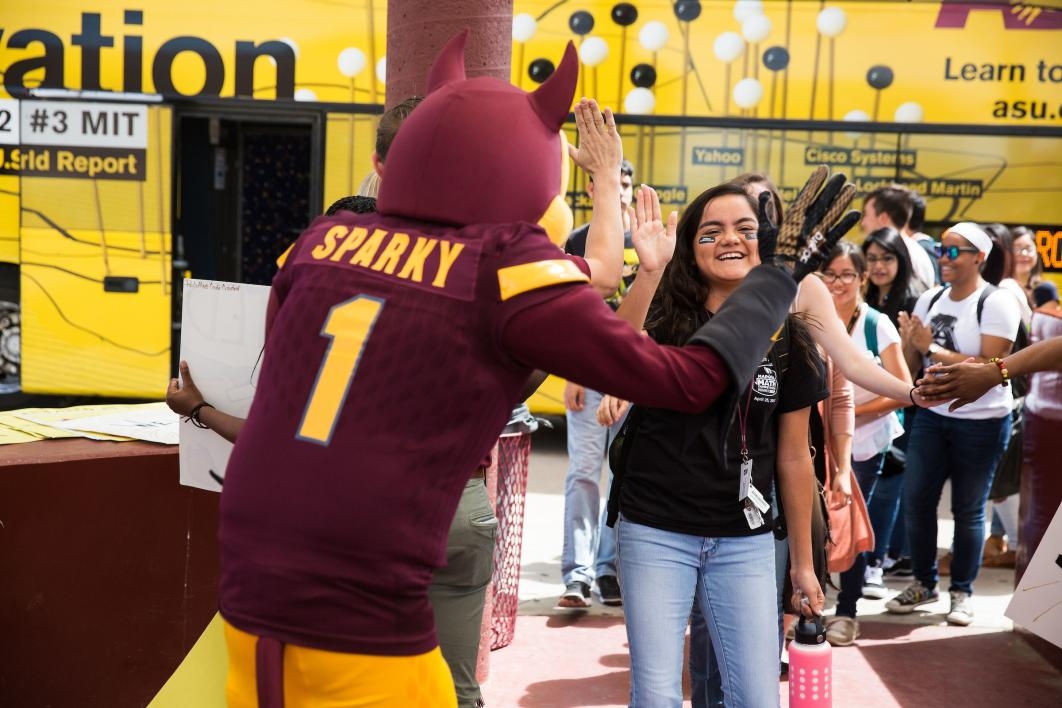 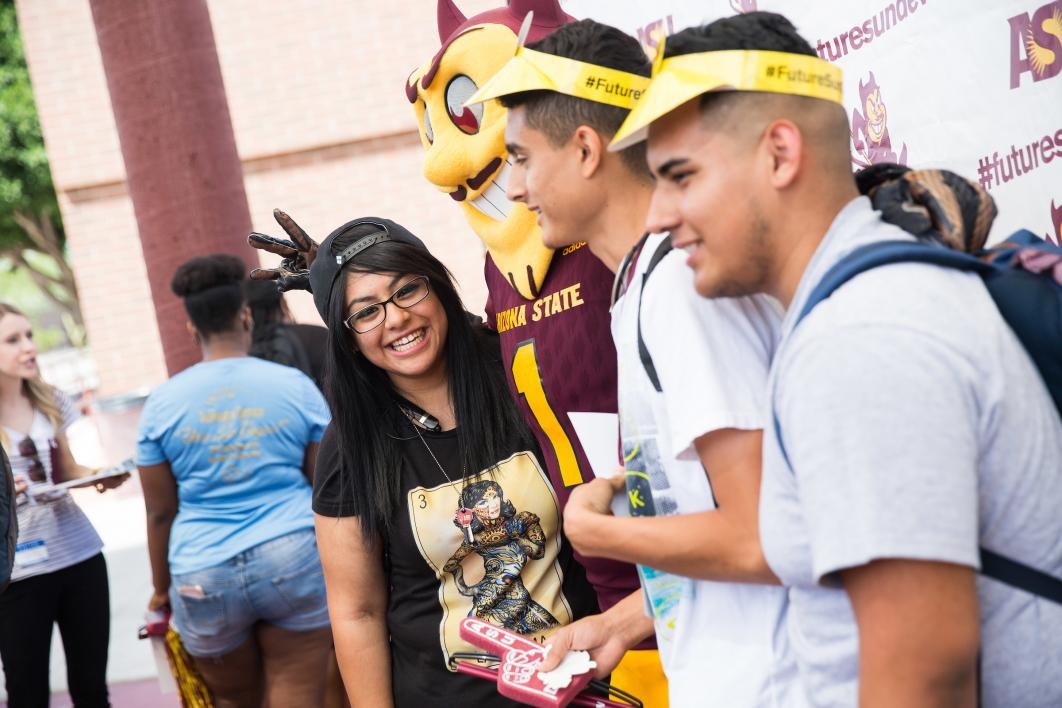 Andrea Nanez, a future nursing student, smiles during a photo with Sparky. 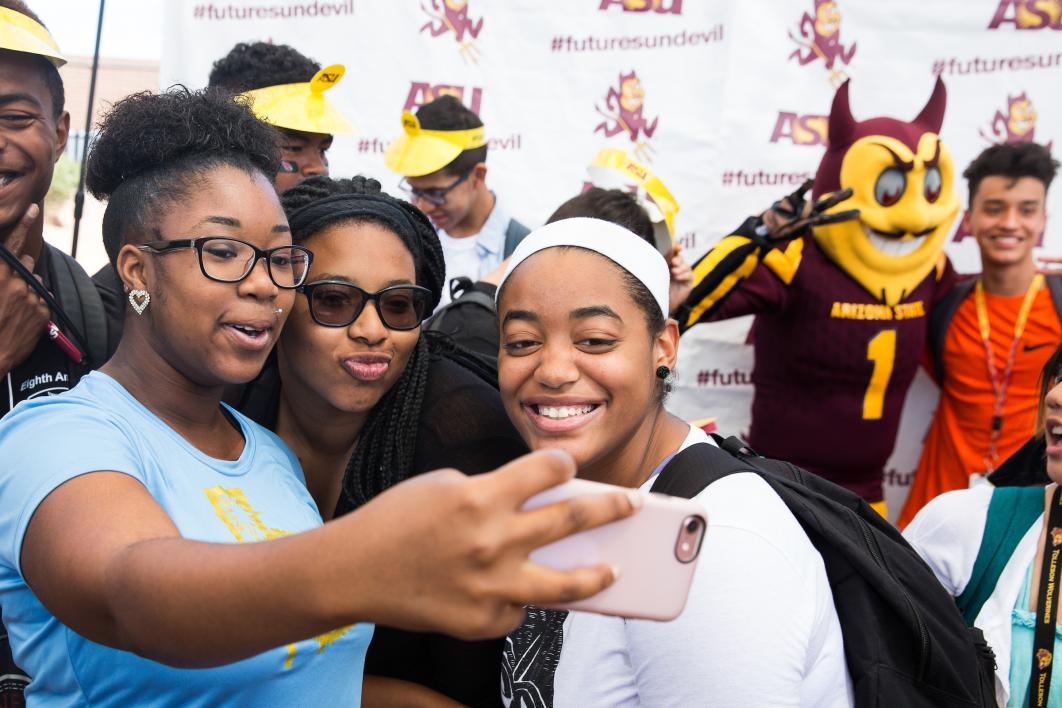 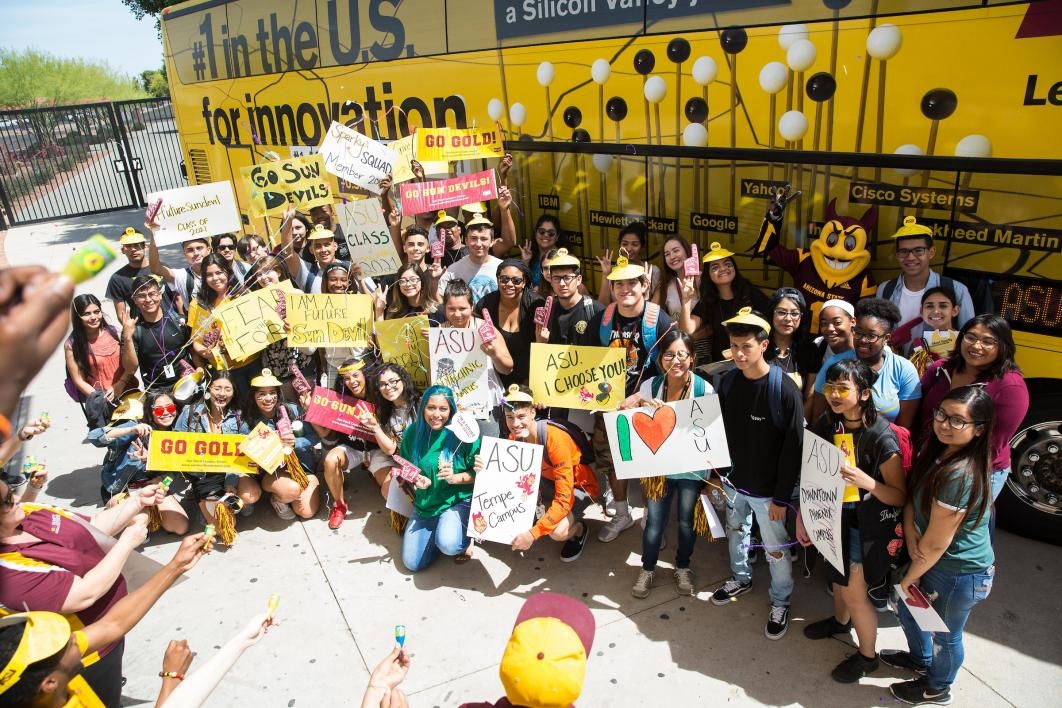 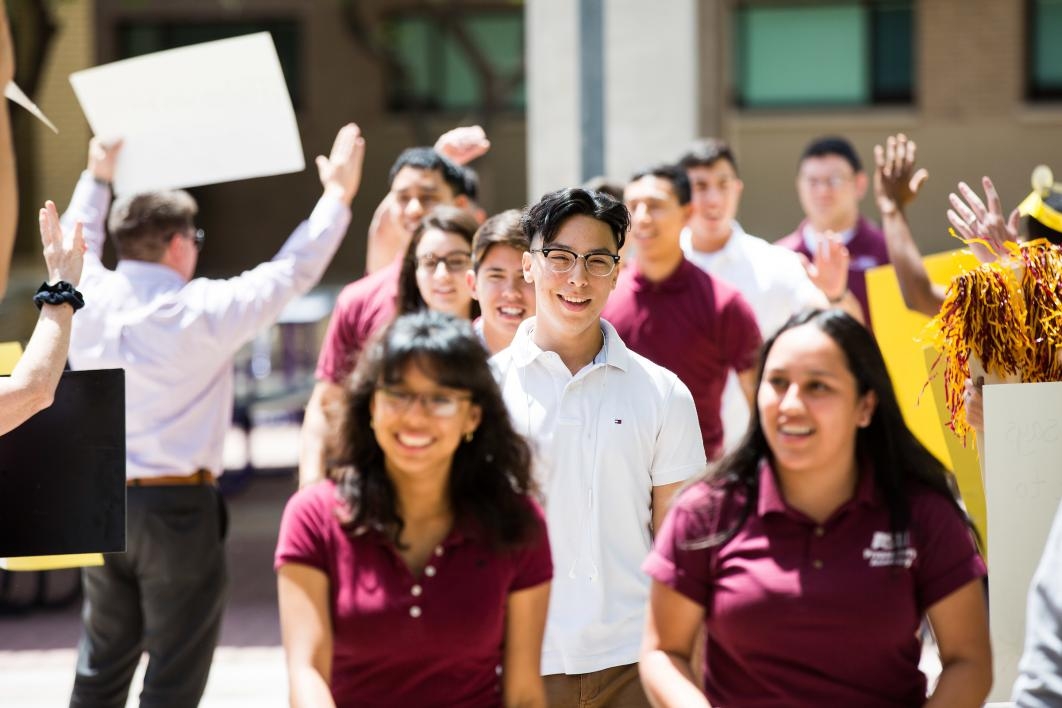 At ASU Preparatory Academy in Phoenix, Atahualpa Guevara and other incoming Sun Devils head to the College Signing Day fun on Thursday. 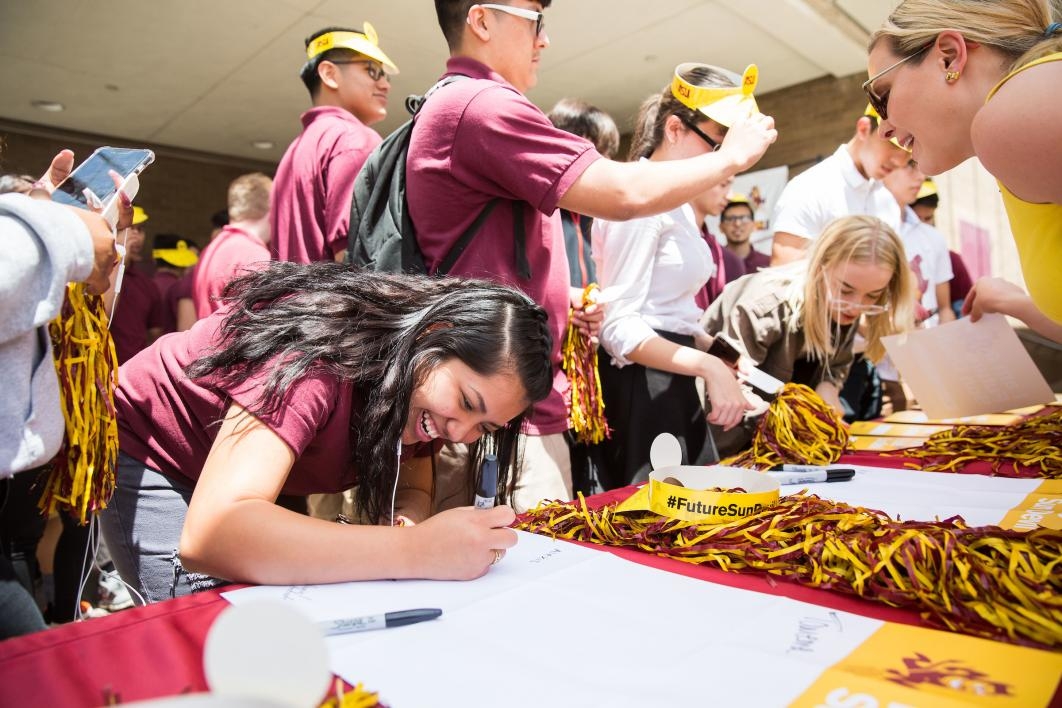 Jacqueline Camara signs her name to a pledge to become a future Sun Devil at ASU Prep on Thursday. 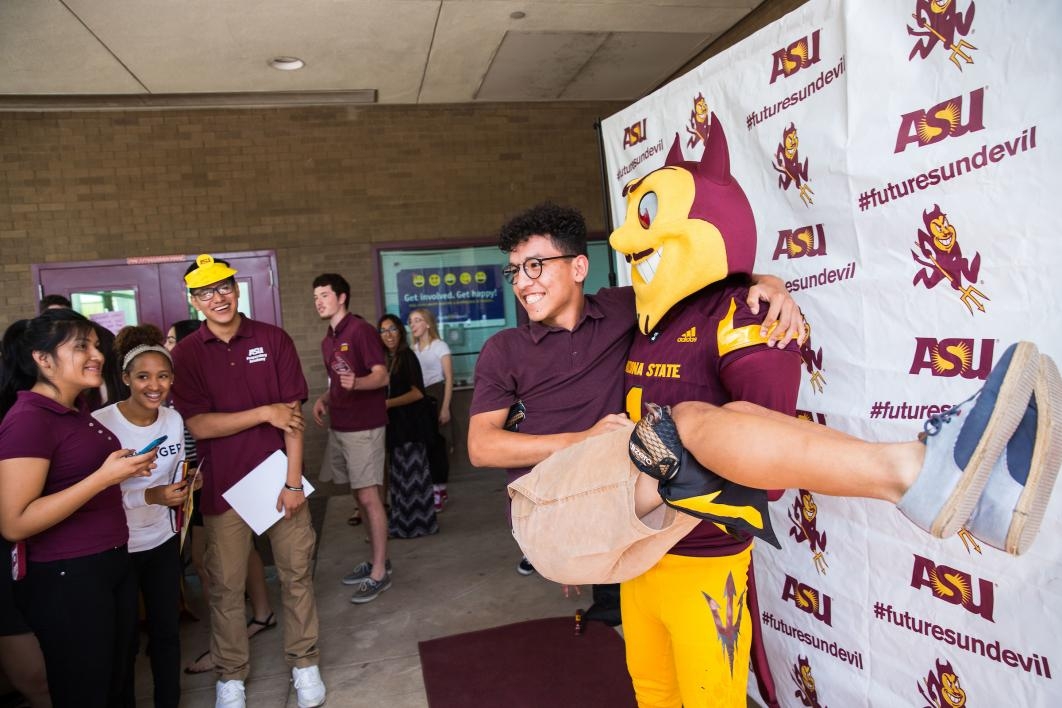 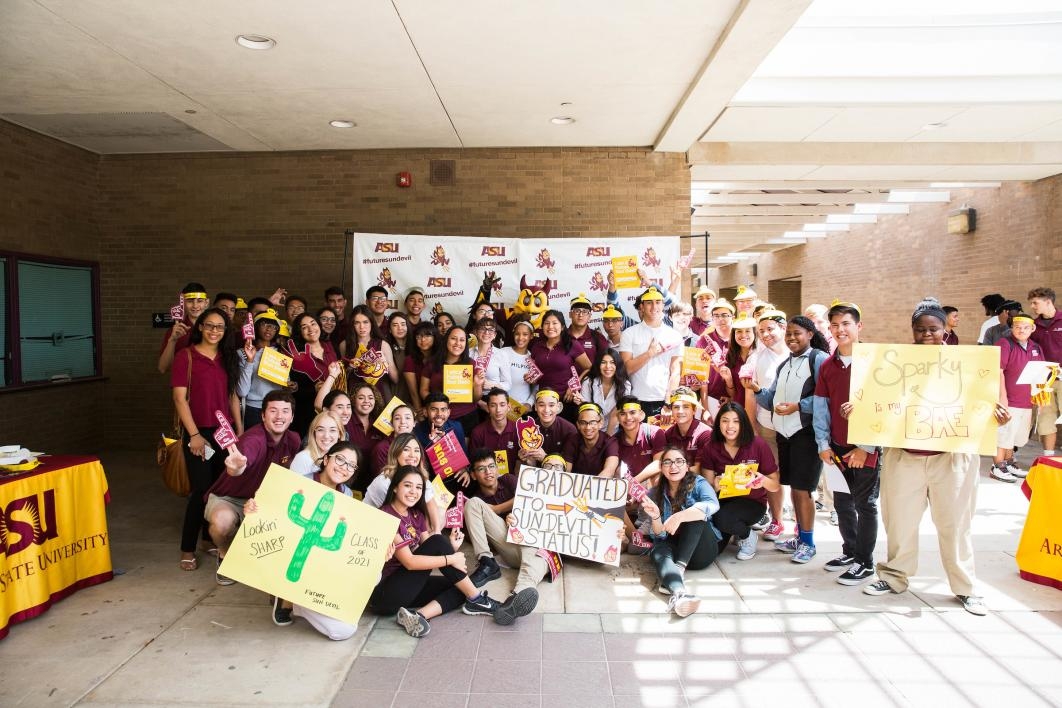 Graduating ASU Prep seniors who are committing to ASU take a group photo with Sparky. 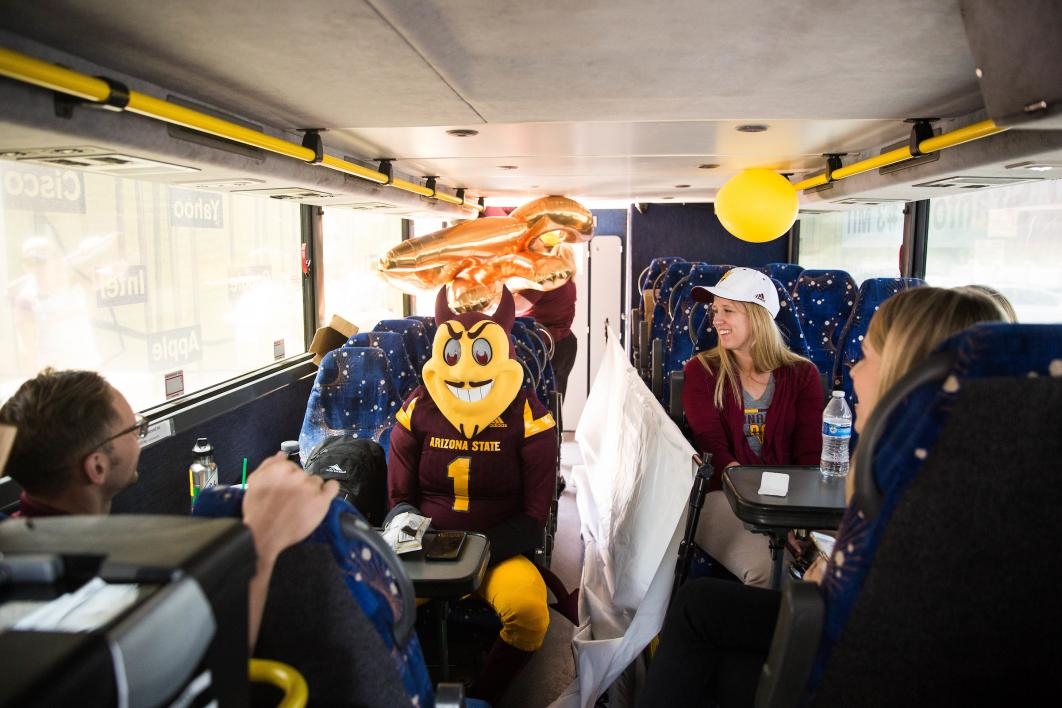 Top photo: Graduating seniors pose for a photo with Sparky during College Signing Day at ASU Prep in Phoenix on Thursday. These future Sun Devils have committed to attending Arizona State University in the fall of 2017. Photo by Deanna Dent/ASU Now