ASU Insight: Behind the faucet — what impacts your drinking water quality?

Pierre Herckes, professor in the School of Molecular Sciences, recently presented a public lecture on water quality issues as part of the Dean of Science Public Lecture Series at ASU. The event also featured a panel of local experts on water quality: Paul Westerhoff, from the Ira A. Fulton School of Engineering at ASU; Rhett Larson from the Sandra Day O'Connor College of Law at ASU; Mike Ploughe who is a senior scientist at the Salt River Project; and Kathryn Sorenson, Director of Water Services for the City of Phoenix. 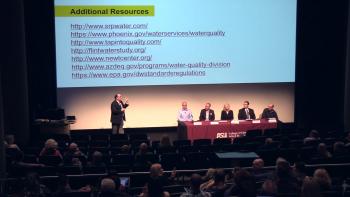 Pierre described many of the delicate factors that contribute to water quality, using the recent problems of Flint, Michigan as an example. When Flint switched their source of water from the City of Detroit water supply to the Flint River, small changes in the water chemistry, which on their own were not unsafe, caused dramatically increased leaching of lead, a known neurotoxin, from the Flint water system pipes, that made its way into the drinking water supply.

Pierre also discussed the local water supply, which has quite diverse sources, including the Colorado, Verde and Salt rivers, and also local wells. Mike Ploughe described the Salt and Verde River watersheds, which are the ultimate source of water in the Valley, and the importance of maintaining their health, and Kathryn Sorensen discussed how different areas in the Valley obtain water differently from the various water sources. Pierre then talked about the kinds of contaminants that can negatively influence water quality, and Rhett Larson described how water quality is regulated by law. The final subject addressed was how water is purified, including a discussion of chlorine and fluorine in water and Paul Westerhoff described water purification methods that are used locally.

Sometimes it's OK to get a little starry-eyed.That was the case Monday night in Tempe at the Discovery Mission Celebration of the Psyche and Lucy missions, where scientists, support staff and guests explored Arizona State University's roles in Psyche — the first ASU-led deep-space mission — and Lucy, which will carry an instrument designed and built on campus. The mood was festive and focused ... 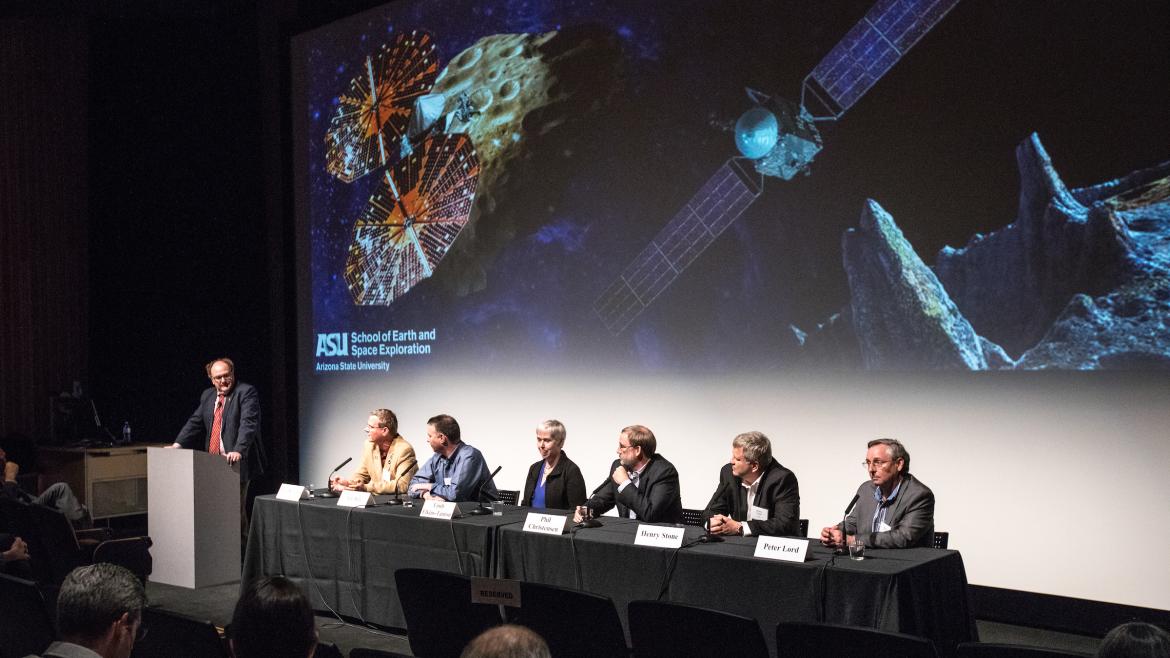 Scientists, fans gather in Tempe to explore the Lucy, Psyche missions and the university's role in each

Sometimes it's OK to get a little starry-eyed.

That was the case Monday night in Tempe at the Discovery Mission Celebration of the Psyche and Lucy missions, where scientists, support staff and guests explored Arizona State University's roles in Psyche — the first ASU-led deep-space mission — and Lucy, which will carry an instrument designed and built on campus. The mood was festive and focused on possibilities.

ASU President Michael Crow addressed the crowd of about 200 people before a panel discussion, saying that by our nature, “we are all explorers.”

The Psyche Mission will explore a metallic asteroid that may be the core of an early planet, giving us a glimpse into what may lie at the core of Earth.

“We’ve never visited a metal world, and we’ve never seen Psyche as anything other than a speck of light,” said School of Earth and Space Exploration Director Lindy Elkins-Tanton, the mission's principal investigator.

The Lucy Mission, which will investigate Jupiter's Trojan asteroids, will carry a thermal emission spectrometer designed and built at ASU. Regents' Professor Phil Christensen is the instrument's designer and principal investigator; he discussed Monday evening how the ability to build space instruments on campus allows us to pique the interest of students and the community.

See more of the sights and sound bytes in the slideshow below. 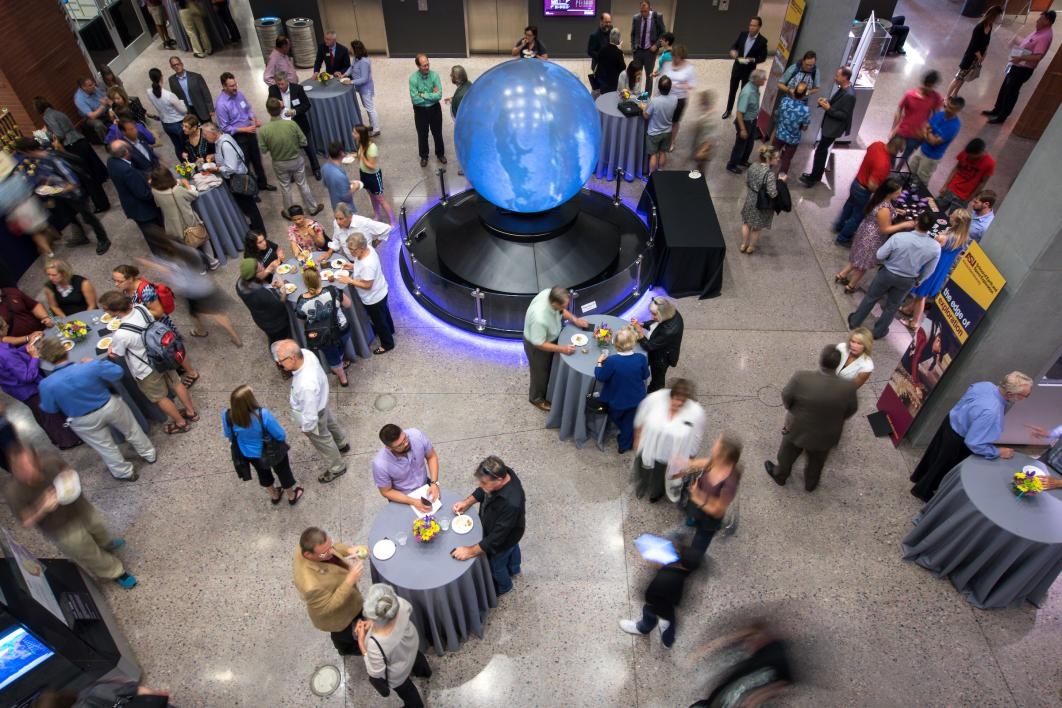 Event goers socialize in the exhibit-filled area outside the Marston Exploration Theater in ISTB4 on ASU's Tempe campus on Monday night. The School of Earth and Space Exploration has been around for only 10 years, but it is in an elite class of schools, capable of building flight instruments on campus and participating in 14 missions. 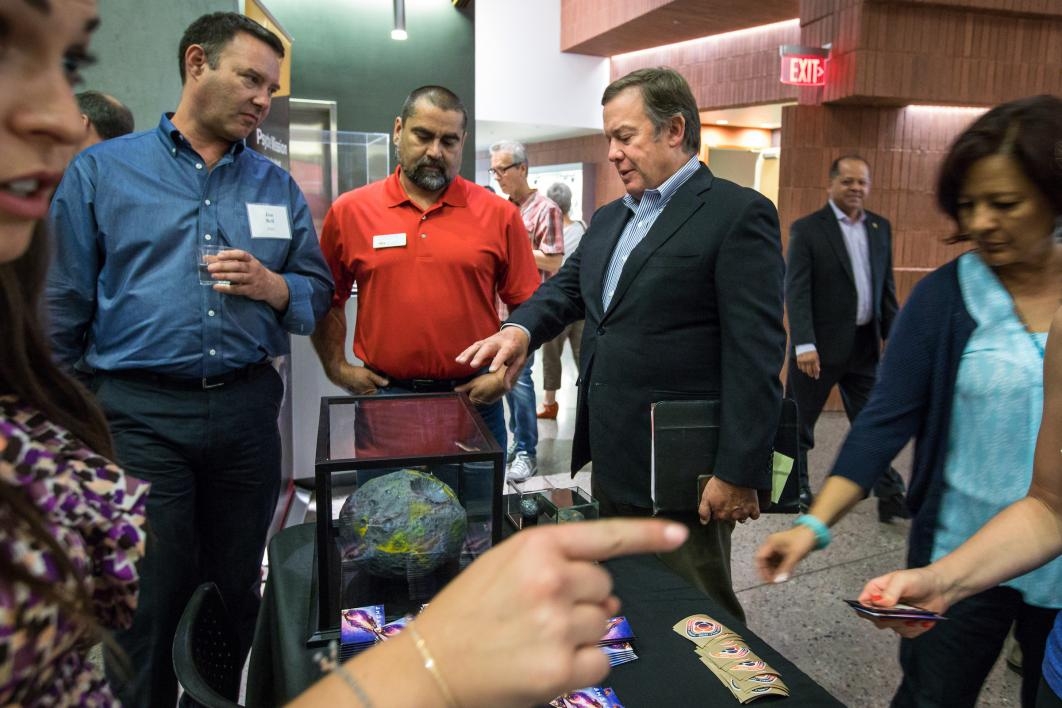 From left: Astronomy Professor Jim Bell, who is part of the Psyche Mission team; Associate Research Professional Ernest Cisneros; and ASU President Michael Crow look at the 3-D-printed model of the Psyche asteroid. Visitors to the Discovery Mission Celebration got to examine models of asteroids and interact with the scientists. 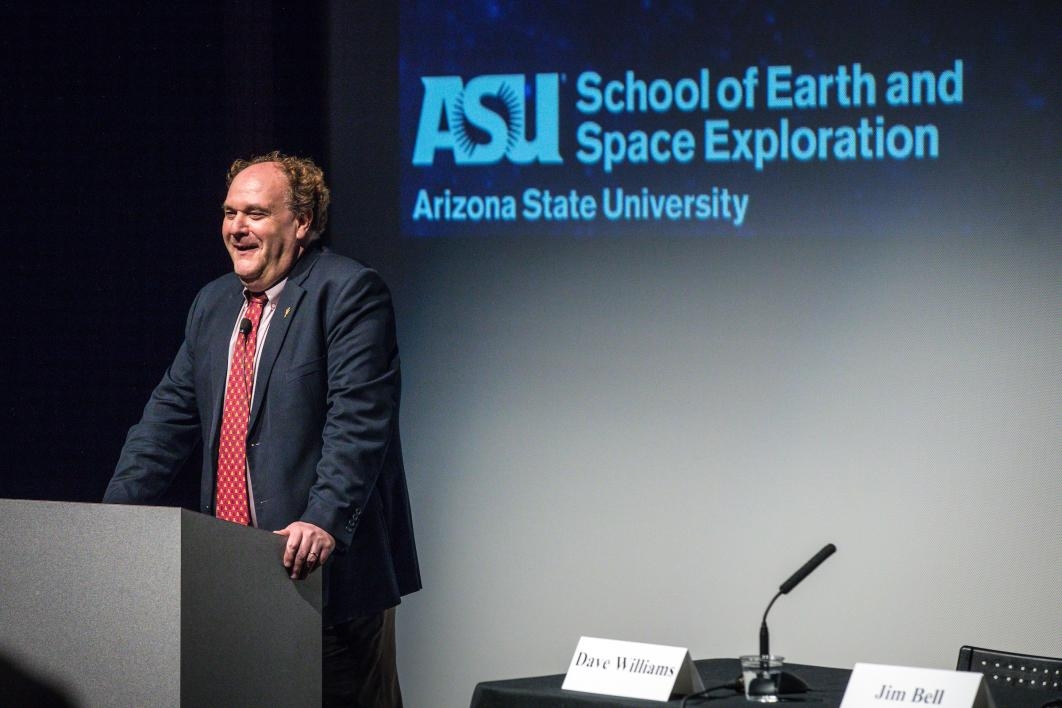 “This is a daring couple of missions,” Ferran Garcia-Pichel, dean of Natural Sciences in the College of Liberal Arts and Sciences, said at the start of the presentation. “NASA in choosing these two missions has been equally daring.” 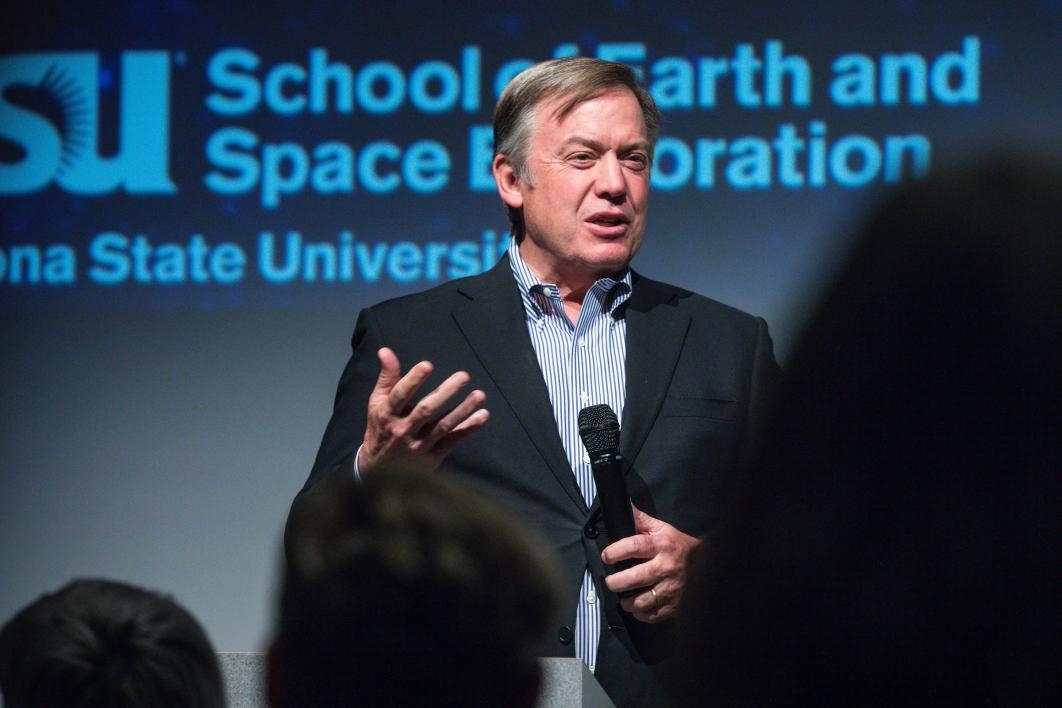 “We need to be explorers,” ASU President Michael Crow said. “We need to inspire exploration.” 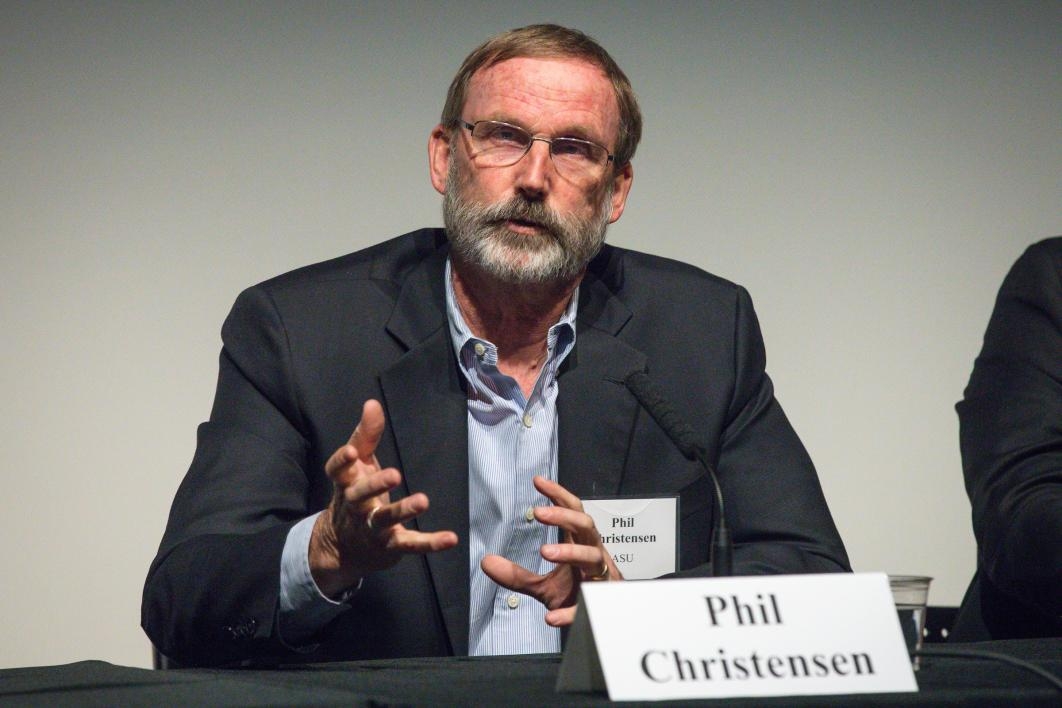 The Lucy Mission will carry an ASU-designed and -developed thermal emission spectrometer, which will measure surface temperatures on each asteroid the spacecraft visits. Regents' Professor Phil Christensen is the instrument's designer and principal investigator; of the 27 engineers on his instrument team, 10 are ASU graduates. 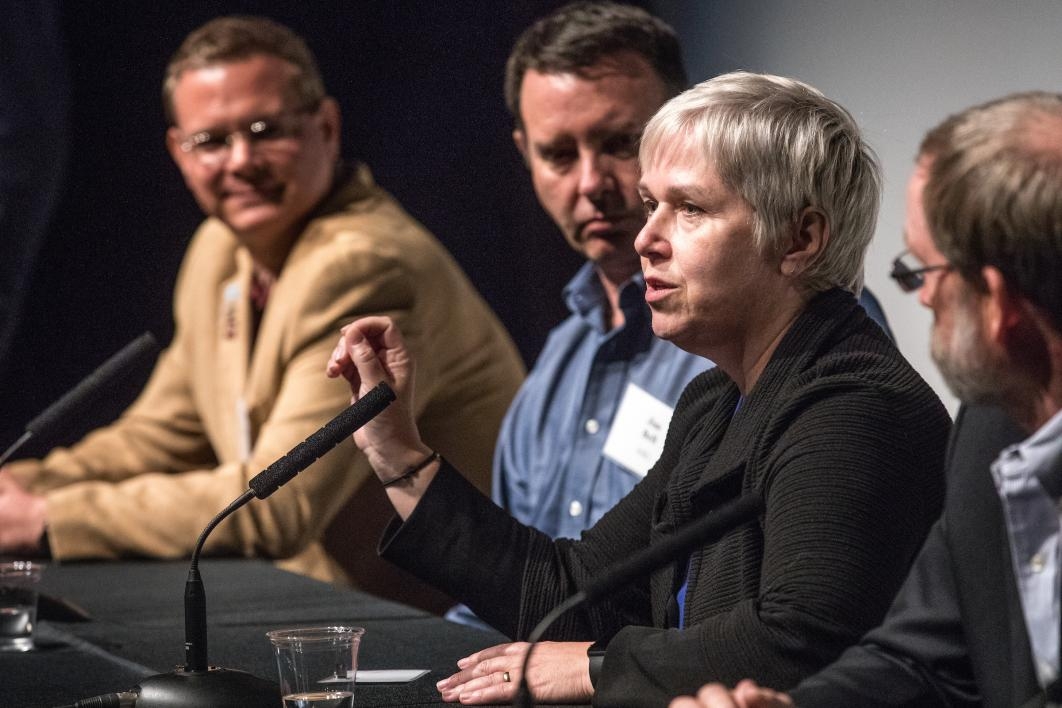 As principal investigator for Psyche, School of Earth and Space Exploration Director Lindy Elkins-Tanton is the second woman in history to lead a NASA deep-space mission. Psyche contains metals worth 100,000 times the gross domestic product of Earth, she told the crowd. “One of these days we’ll be up there mining asteroids,” she said. “This is absolutely a precursor to commercial activity.” 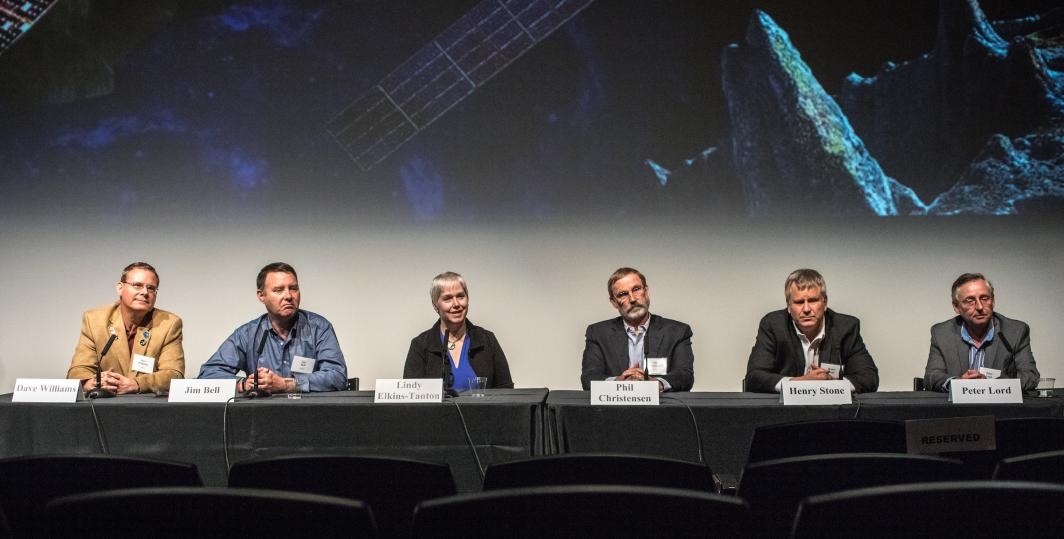 “There aren’t many classes of objects in the solar system we haven’t seen up close,” said Jim Bell (second from left), deputy principal investigator on the Psyche Mission. “This is one of them.” 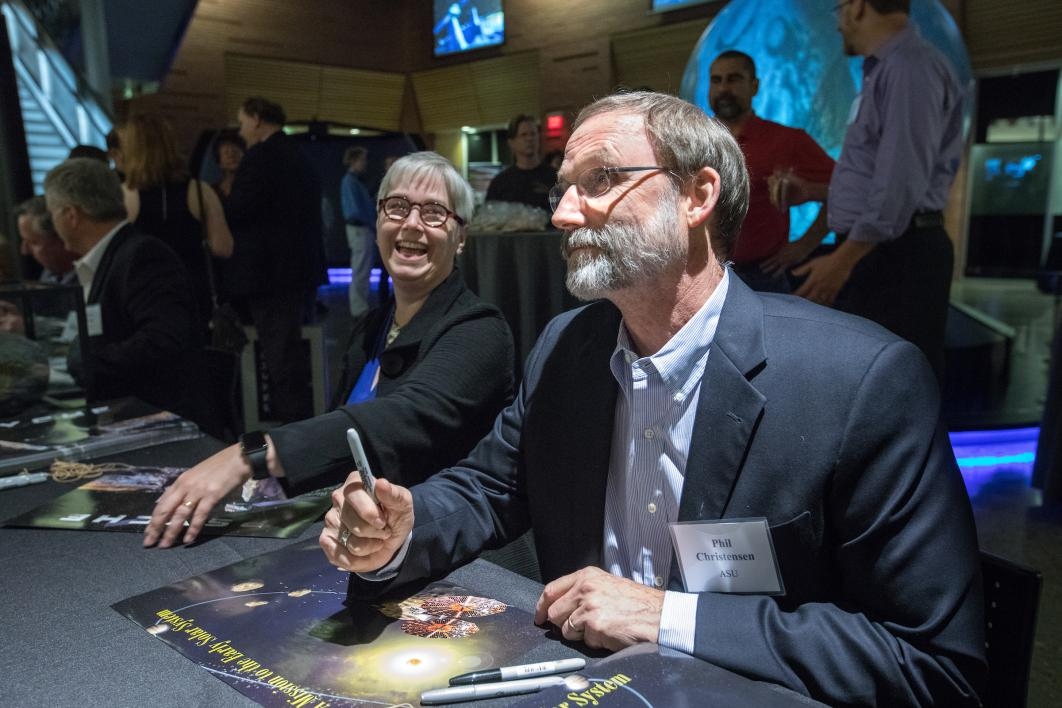 After the panel discussion, which included a range of questions from the audience, the scientists autograph posters for attendees amid a celebratory atmosphere.