An ASU-led project that makes it easier for humans and robots to communicate is among the contenders for a spot in an international competition widely considered as the “Olympics of Technology.”

Three doctoral candidates in computer science at Arizona State University’s Ira A. Fulton Schools of Engineering constitute Æffective Robotics, one of 12 teams that will compete next week in Seattle in the U.S. finals of the 2017 Microsoft Imagine Cup.

They’re vying for a spot in the top six, which would earn them a place in the international finals in Seattle in July, where they would go for the top prize of $100,000, plus support to launch a start-up. Each year, about 350,000 students from more than 170 countries and regions enter the competition, including about 3,000 students at colleges and universities in the U.S.

After several months of work on the project they’ve titled “Cloudy with a Chance of Synergy,” the Æffective Robotics members say that they’re confident.

Tathagata Chakraborti, Anagha Kulkarni and Sarath Sreedharan will be presenting a concept — along with software — for the operations of a “factory of the future,” in which robots and humans would be connected through a networking system enabling them to effectively “share a brain.”

The humans and robots would not actually be reading each other’s minds, Chakraborti said. But they would have technology that provides platforms for a “mutually understood vocabulary” and for “intention recognition and projection,” allowing everyone and everything connected to the network to anticipate each other’s physical movements and high-level goals and to comprehend the intentions and motivations behind those movements.

It’s all achieved through what team members describe as a Consciousness Cloud that would give the robots working in the factory “real-time shared access to the mental state of all humans in the workplace.”

The humans would wear helmets containing technology linking them into that cloud.

The network system is enhanced by an Augmented Workspace scheme in which humans and robots communicate and interact through an integration of real and virtual environments using holograms.

Workers would wear the Microsoft HoloLens, described as mixed-reality “smart glasses,” to enter into that virtual-reality space.

The setup would allow people to not only infer the intent of robots’ actions through looking at holographic projections, Chakraborti said, but could also communicate their own intentions to the factory’s robots.

A robot and a human would be able to understand “what the other intends to do and why it is doing that thing in a particular way,” he said.

The overall concept is embedded in the team’s name.

ÆRobotics is short for Æffective Robotics. “Affective” refers to mental modeling and brain waves. “Effective” refers to the holographic vocabulary for effective communication between robots and humans in the augmented-reality loop.

The team members say that if their idea were turned into reality it would open up a plethora of possibilities for productive human-robot interactions in myriad endeavors beyond a factory assembly line and the manufacturing industry.

For the Imagine Cup competition, the team has submitted a video demonstrating how the Æffective Robotics system would work (below).

The team will be demonstrating their project in the Seattle Art Museum on April 19 as part of a science-fair-style exhibition, followed by a pitch presentation and a project demonstration before Imagine Cup judges the next day.

The project evolved out of research Chakraborti, Kulkarni and Sreedharan are doing as part of their doctoral studies under the direction of Subbarao Kambhampati, a Fulton Schools professor of computer science and engineering.

As members of his Yochan Research Group (Yochan means “thinking” or “reasoning” in Sanskrit), they are developing human-aware artificial intelligence systems that can support fluid teaming of robots and people.

“For far too long, AI systems have focused on working autonomously without interacting with humans,” Kambhampati said. “This team’s Imagine Cup project is at the forefront of research aimed at augmenting productivity by making machines work seamlessly with humans.”

Kambhampati is the team’s mentor, but the students have also been guided by Yu Zhang and Heni Ben Amor, both Fulton Schools assistant professors of computer science and engineering with broad expertise in human-robot interaction, artificial intelligence and machine learning.

In addition, they’ve been aided by a robot lent to them by Professor Baoxin Li’s computer science and engineering research group and by the cognitive neuroscience expertise of Chris Blais, an assistant research professor of psychology in ASU’s College of Liberal Arts and Sciences and Barrett, The Honors College.

Michael Thompson has had quite the month. Not only did the Arizona State University police chief come up with the idea of having his officers wear teal-colored patches to commemorate Sexual Assault Awareness Month, but he was recently named the inaugural Champion of Change by EVAW International. The group, which campaigns to end violence against women, created the new award to honor individuals ...

Michael Thompson has had quite the month.

Not only did the Arizona State University police chief come up with the idea of having his officers wear teal-colored patches to commemorate Sexual Assault Awareness Month, but he was recently named the inaugural Champion of Change by EVAW International. The group, which campaigns to end violence against women, created the new award to honor individuals who work to improve responses to victims of sexual assault and other forms of gender-based violence. 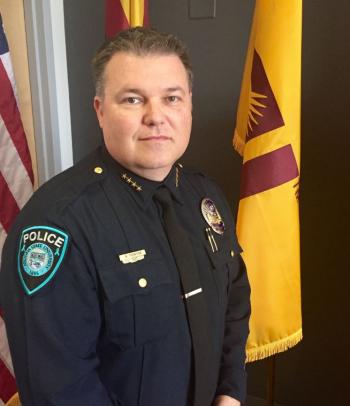 ASU Police Chief Michael Thompson wears the teal patch that officers are wearing throughout April, which is Sexual Assault Awareness Month. Police aides and support staff will wear other teal emblems, taking place in conjuction with other efforts to raise awareness about sexual assault and enhance support for survivors. Download Full Image

"Chief Thompson has led this department through a series of critical reforms to create a safe, victim-centered culture on ASU campuses," said ASU Police information officer Katy Harris. "We felt it was so important to let students, faculty, staff and the surrounding ASU communities know that we’re here to help."

Thompson has been helping the cause in all sorts of ways.

The police department started its campaign in earnest in 2014, when ASU became the first university to declare its commitment to the Start by Believing cause. Not long after, Thompson led his agency in creating a Special Victims Unit, making ASU one of just four universities in the nation with an SVU dedicated to addressing sexual assault on campus.

"It is not easy to identify the need for change and set about implementing reforms," wrote EVAW International in a press release. "Making progress is hard work, and it can feel like it is often two steps forward, one step back. Communities will always need leaders like Chief Thompson to keep us moving forward."

One of Thompson's most recent intiatives was the creation of his department's teal-colored patches, a first-of-its-kind effort.

All ASU Police Department officers and aides are wearing the limited-edition patches throughout the month of April, taking place in conjuction with other efforts to raise awareness about sexual assault and enhance support for survivors. The innovative initiative is the first time the department has created a visible sign for its employees to wear.

The patches are just one of the ways the department is showing their support this month.

According to Harris, officers, police aides and support staff are also wearing teal bracelets and lapel pins. In addition, squad cars on four of ASU's campuses are adorned with teal ribbon decals for the remainder of April.

A limited number of the teal-colored patches are available at the ASU PD Tempe campus location for a $5 donation, the proceeds of which will be given to the Winged Hope Family Advocacy Foundation.