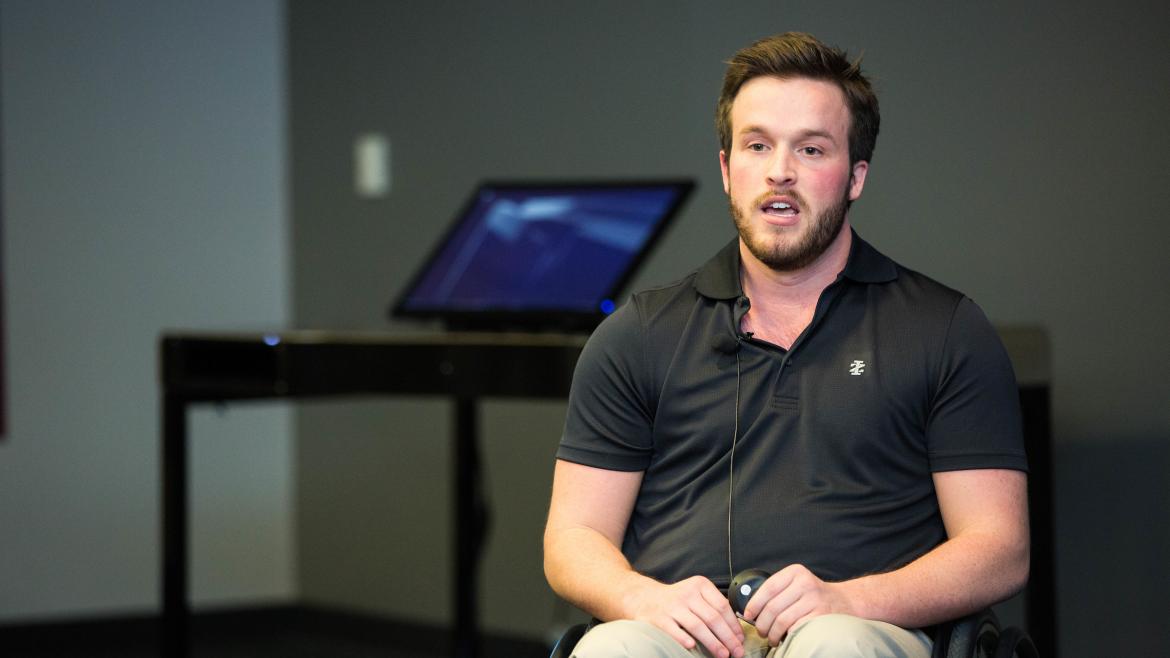 Engineering major wins $35,000 for inventing a therapy device for patients with paralysis

An Arizona State University student has won $35,000 for inventing a therapy device that could change his life and help thousands of people who can’t walk.

Dan Campbell, a robotics engineering major at ASU’s Polytechnic campus, invented AmbulAid to help people with neurological damage — like himself. Campbell, who was paralyzed from the chest down in a wrestling accident five years ago, uses a wheelchair.

He beat three other student-led entrepreneurial teams in the first ever Glowing Minds Consumer Product Challenge on Thursday at ASU's Tempe campus. Another team, called Shockingly Simple, won $10,000 for its invention — the Skeeter Eater, a non-chemical pest-control device.

Campbell said he invented the AmbulAid because nothing like it exists. The invention, a system of straps and supports, is used with a physical therapist in conjunction with a treadmill to help patients with “gait training” — essentially simulated walking. Gait training is important for people who have paralysis because it prevents osteoporosis, increases blood flow and, most importantly, can create neural connections between the muscles and the brain, sometimes leading to improved sensation and muscle use.

Campbell showed a video of himself using a sophisticated robotic exoskeleton gait trainer during his initial therapy after his injury. But those devices are expensive and rare. When he left the state-of-the-art facility for a regular clinic, his progress reversed.

“The day you’re discharged from therapy is typically the day your recovery ends,” he said. “For a lot of people that means losing sleep for the rest of your life wondering if your body’s potential to heal was actually reached.” 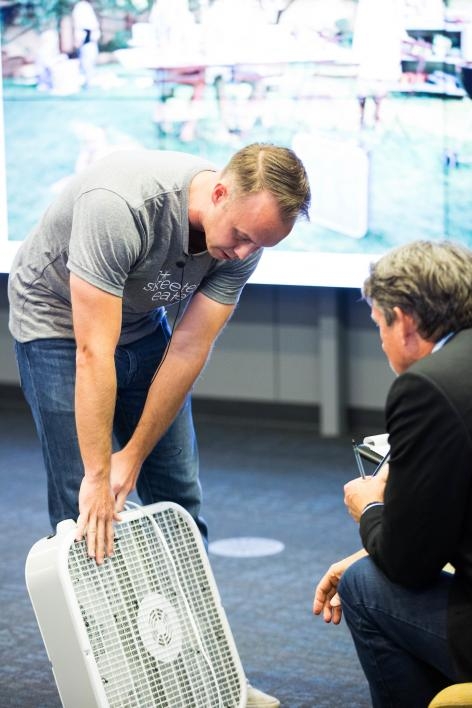 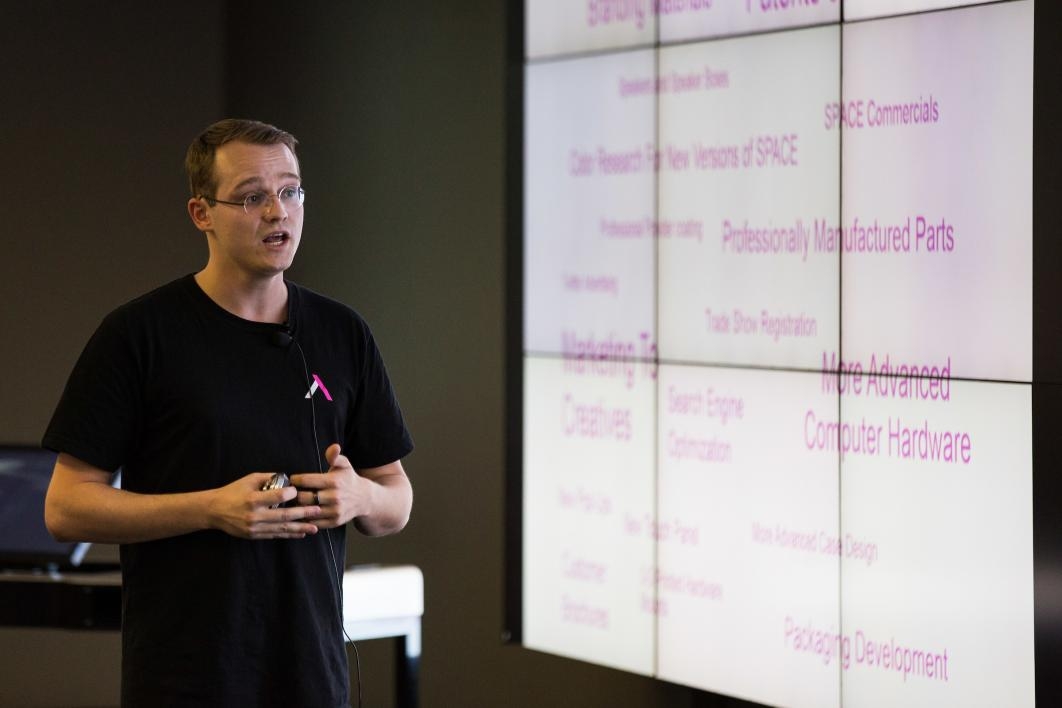 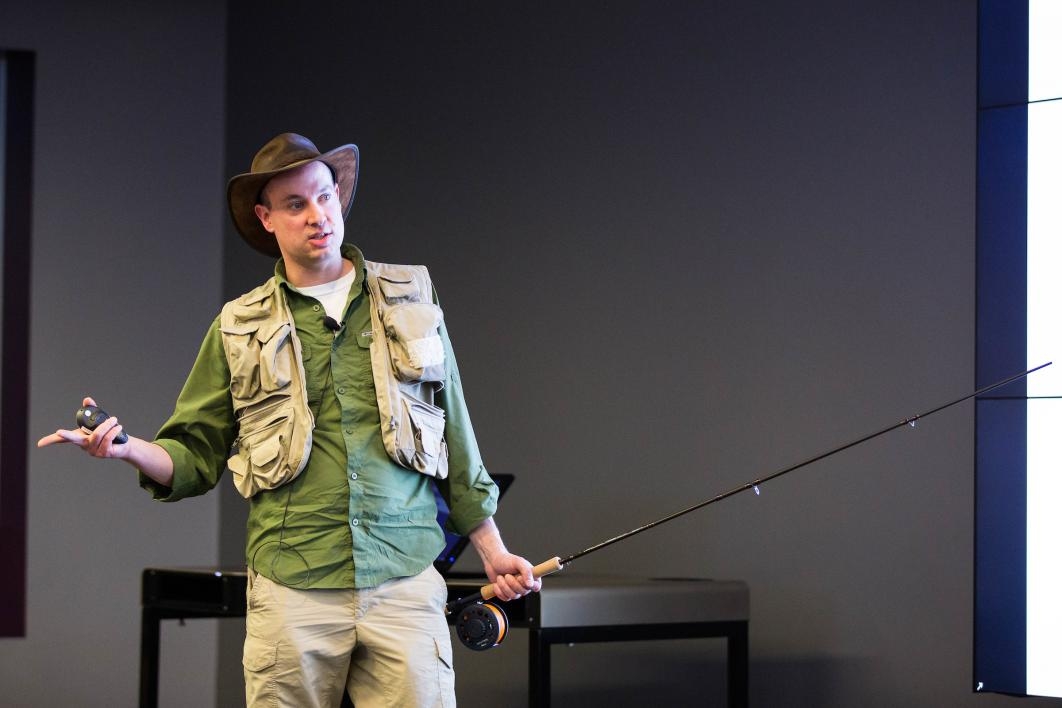 Jeff Ward, a fly fisherman and founder of Epic Creek, pitches his fly-fishing kit to judges at the Glowing Minds Consumer Product Challenge. 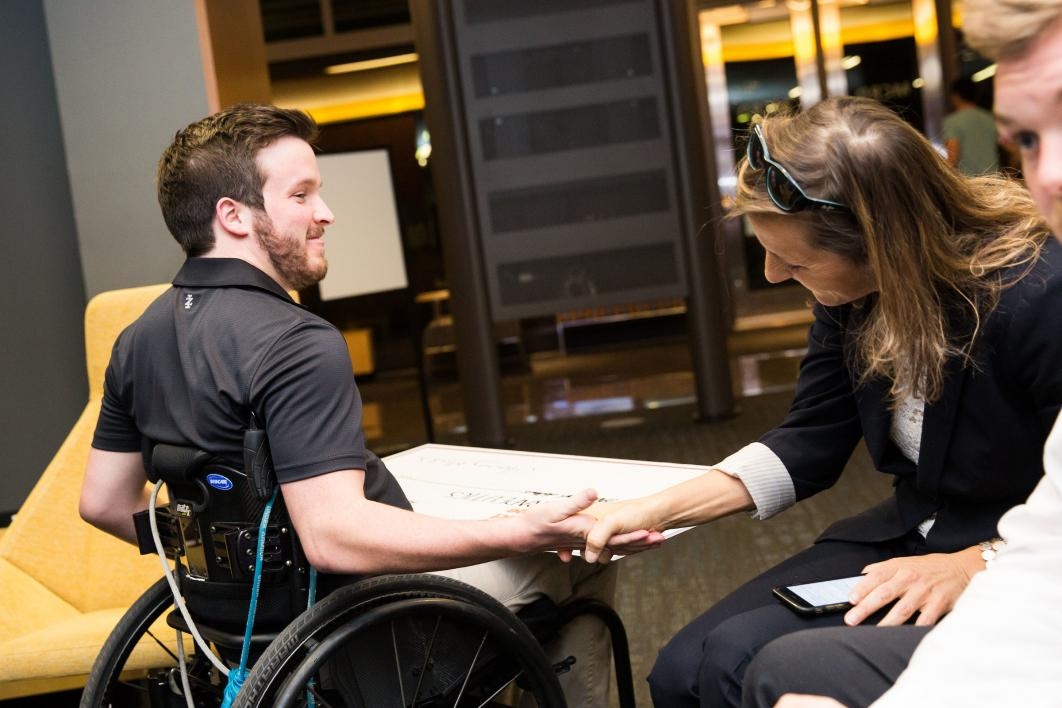 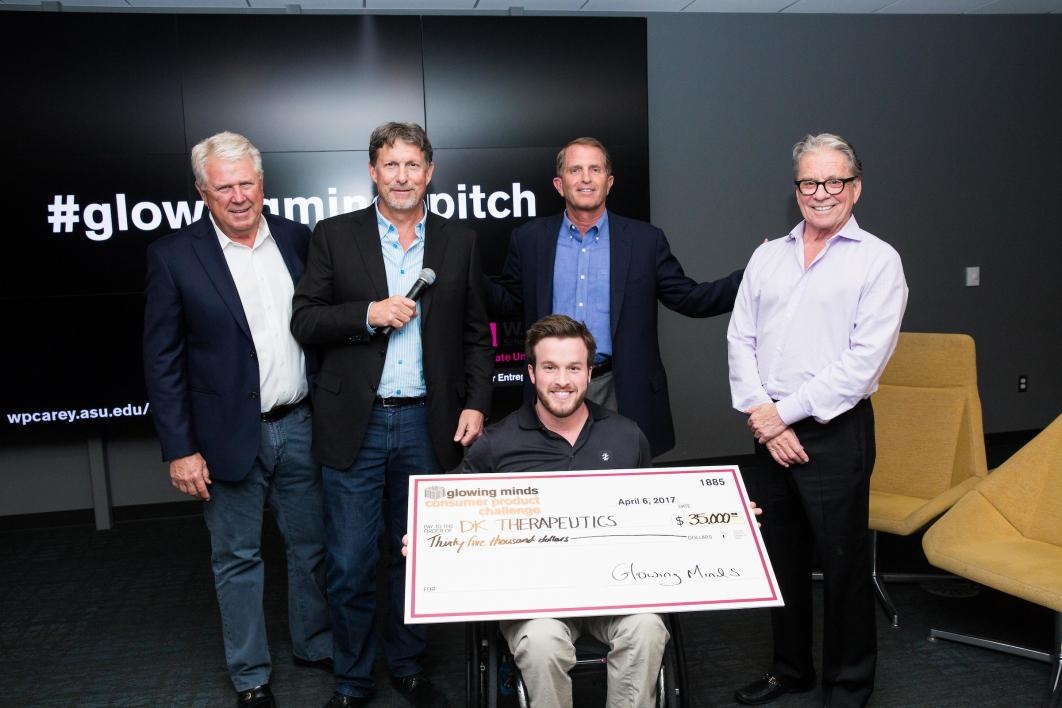 So he partnered with a doctor of physical therapy to launch his business, DK Therapeutics, and to create AmbulAid.

“Now I’m ready to bring it to millions of others who desperately need it,” he said.

He has a patent pending on the device and plans to sell it for about $2,000.

The panel of four judges, all longtime entrepreneurs, were impressed with Campbell’s simple design and well-executed business plan.

“The reason we got involved in putting this on was to try to bring out this entrepreneurial spirit in people. You’re living this nightmare and you’re making it into a dream,” said David Watson, who was a co-founder of the Philosophy line of skin-care products and founded Revolution Tea. He donated the prize money to the competition, which was sponsored by the Center for Entrepreneurship in the W. P. Carey School of Business.

“You are what this product represents, and I think being first to market will be gigantic.”

Campbell said even with high education, fewer than half of people resume working after a spinal-cord injury, so he would like to hire people with spinal injuries to be his sales force.

“They will carry on my advantage of belonging in the user group and being emotionally invested in the product,” he said.

Eventually he would like to integrate functional electronic stimulation in the AmbulAid, a process that uses electrical impulses to facilitate muscle movement.

“But that will need years of development, and I want to get this to market fast because there’s a glaring need for it,” Campbell said.

Michael Court, an MBA student and a founder of Shockingly Simple, said he thought of the Skeeter Eater after facing a mosquito problem at his house.

“I did some research, and I found out that mosquitoes are weak fliers. They can’t stand even a small breeze. There’s no product that exploits this right now,” he said.

The Skeeter Eater, which looks like a typical box fan, incorporates an electric grid inside it.

“A mosquito flies by and gets sucked into the intake, gets plastered into our electric grid and boom! It’s dead,” he said.

Court said the team plans to sell the device on its website, as well as Amazon and eBay, for $50 to $100.

Terry Lee, one of the judges, said he loved the idea and thought it would make a great infomercial product.

“Everyone wants to solve their mosquito problem, and everyone hates chemicals,” he said.

Court said the team is considering a one-for-one business model, like Tom’s Shoes, where the retail price pays for one device for the consumer and another for a country that is dealing with mosquito-borne diseases.

The other two finalist teams were M33 Labs, which created a “smart desk,” and Epic Creek, which developed a fly-fishing kit.

Brandon Smith, a technological entrepreneurship major at the Polytechnic campus, said M33 Labs wanted its product, Space, a high-technology desk with integrated hardware and high-density touch-screen display, to be beautiful as well as functional.

“We thought, what if we could take a computer and could pack all the power and all the functionality that a designer or engineer would need into one beautiful, unified package that would be ready to go out of the box?” said Smith, who is CEO of M33 Labs.

The company hopes to sell Space for $3,500, or $4,500 for a version for high-end design and animation professionals.

Jeff Ward, a technological entrepreneurship major and founder of Epic Creek, is a fly fisherman and decided to invent a streamlined system for using and buying flies. The box would hold cards of flies that are interchangeable and customized.

He is hoping to crowd-source the expertise to determine each set of flies and will distribute prototypes to celebrity fishermen.

“There are a lot of anglers who are avid. They want to preach, ‘This is what works,’ ” he said.

Top photo: Dan Campbell, a robotics engineering major at the Polytechnic campus, pitched his idea for AmbulAid during the Glowing Minds Consumer Product Challenge on Thursday. He won $35,000. Photo by Deanna Dent/ASU Now

As commencement season approaches, a number of Arizona State University Sun Devils already know what they will be doing upon graduation. They will be making an impact in classrooms across America, changing the lives of thousands of children and their families by committing two years to serving in Teach for America. The call to serve has drawn interest from Sun Devils from a range of majors, who a...

Application for next TFA corps open through April 21

As commencement season approaches, a number of Arizona State University Sun Devils already know what they will be doing upon graduation. They will be making an impact in classrooms across America, changing the lives of thousands of children and their families by committing two years to serving in Teach for America.

The call to serve has drawn interest from Sun Devils from a range of majors, who all share an understanding of the importance of eliminating educational inequality. As a result, ASU has quickly emerged among the top large universities contributing to Teach for America (TFA) — currently ranked No. 4. 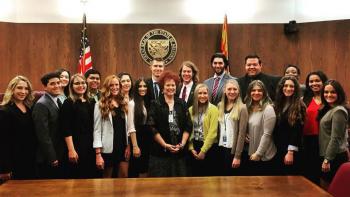 Arizona State University students who have been accepted into the Teach For America (TFA) program were recognized during an Arizona Senate floor meeting on Feb. 27. ASU’s future TFA corps members were invited to attend the floor meeting and tour of the Senate building by Matthew Simon, an Arizona Senate policy adviser and ASU TFA alumnus. Download Full Image

“Teach for America has dedicated its largest recruitment effort to ASU because they believe in the talent and commitment to service they find in Sun Devils, year after year,” said Cindy Parnell, executive director of Career and Professional Development Services at ASU.

For 26 years, the national nonprofit organization has worked to advance its mission to “enlist, develop, and mobilize as many as possible of our nation’s most promising future leaders to grow and strengthen the movement for educational equity and excellence.”

Individuals selected to the program commit to a two-year teaching assignment in one of 53 low-income communities across the United States served by TFA.

“At ASU, we are especially proud of our partnership with TFA and our shared commitment to ensuring broad access to education and opportunity for all,” Parnell said.

Currently, 41 ASU graduates are serving in the program, and to date, 20 Sun Devils have been selected as future TFA corps members. Recently, these students were recognized at an Arizona Senate floor meeting and hosted for a day at the Capitol by ASU TFA alumnus Matthew Simon, who now serves as a policy adviser to the Arizona Senate.

“The goal of the TFA recognition and Arizona Senate tour was to enable Sun Devils to network with a TFA alumnus who shares their connection to ASU, and to observe firsthand the impact they can make on education policy,” said TFA recruitment director Veronica Aguilar.

ASU senior Ayanna Akinyemi was among the future TFA corps members in attendance at the Feb. 27 program at the Arizona Senate.

“The event was very inspiring,” Akinyemi said. “Having TFA alumni come and speak with us about their experiences in the corps and the skill sets they took away from the experience excited me even more to join the Memphis corps next year,” said Akinyemi, who is completing a bachelor’s degree in biochemistry with a minor in early childhood education.

Simon said the individual recognition received by Akinyemi and the other future TFA corps members in attendance was especially meaningful. As they were seated in the Senate gallery, each individual TFA future corps member was introduced by State Sen. Sylvia Allen, R-Snowflake, and congratulated on their commitment to service and educational equity.

“I wanted to reconnect with the ASU community and work to get more Sun Devils involved with an organization that changed my life,” Simon said. “ASU has an amazing student body that I think students across our country can benefit from.”

After graduating from ASU, Simon served as a TFA corps member in the Mississippi region. He returned to Arizona after his TFA experience to become the policy adviser to the Arizona Senate Majority.

“Seeing such energized Sun Devils at the event inspired me to continue doing the work that I am doing. It reminded me why I joined TFA and what I loved about being a Sun Devil,” Simon added.

There’s still time to apply for Teach for America. Applications are being accepted through April 21. To learn more, contact Veronica Aguilar, Director, Recruitment/ASU and TFA alumna at: Veronica.Aguilar@teachforamerica.org or 646-592-3399, or visit https://eoss.asu.edu/makeyourimpact.