“The Only Pirate at the Party” was co-written with her sister Lindsey Stirling, award-winning American violinist

Horseback riding instructor by day and an author by night, Arizona State University alumna Brooke S. Passey has followed her bliss to find success and accomplish her dreams.

“Growing up, I was always taught that anything was possible if I wanted to work hard enough for it,” said Passey, published author and founder of Passey Ranch. 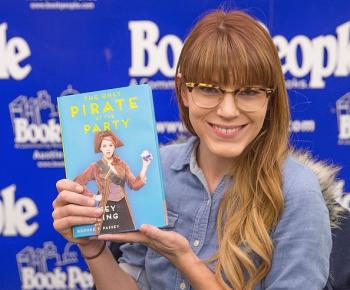 Arizona State University alumna Brooke S. Passey co-authored “The Only Pirate at the Party,” which was published by Simon and Schuster in January 2016. Download Full Image

In May 2013, Passey received a Bachelor of Arts in English with an emphasis on creative writing in fiction from the Department of English in the College of Liberal Arts and Sciences. Prior to graduation, she spent three years studying biology at Brigham Young University.

“My original plan was to go to veterinary school,” Passey said. “When I finally realized I didn’t want to pursue my biology degree any further, creative writing seemed like the obvious choice. I’ve always had a passion for writing.”

After graduation, Passey spent some time as a writer for several different blogs — from fashion to literary journals — while simultaneously writing a book with her sister Lindsey Stirling, an electric violinist who started on YouTube.

“When I was a senior, my sister approached me about writing a book. She wanted to share her journey — the good and the bad — with the world,” Passey said. “It started as nothing more than a fun project. I’d pick a topic or period of time in her life and ask her as many questions as I could. I’d comb through my notes and piece together stories and anecdotes, which later turned into chapters in her book.”

Passey spent more than a year reaching out to different agents and publishers, but faced rejection letter after rejection letter. In fall 2014, the sisters found an agent who believed in their project and helped clean up their book proposal and manuscript. “The Only Pirate at the Party” was picked up by Simon and Schuster in December 2014, published in January 2016, and is currently a New York Times Bestseller.

“I’ll never forget the moment I found out they wanted to offer us a book deal. I was outside feeding my horses and I literally dropped all the buckets and screamed louder than I’ve ever screamed before,” Passey said. “It was so surreal to know that a dream I’d had my entire life was going to become a reality.”

Passey attributes her success to the education she received at ASU. She said she studied under some incredible writers and worked hard to become a professional writer.

“The publication industry is an intimidating beast and having my creative writing degree at the top of my resume made me feel more confident,” Passey said. “It’s easy to get caught up in the practicalities of life — and while survival, financial and emotional, is necessary — don’t ever give up on what you really want.”

While writing the book, Passey pursued her second passion for horseback riding and founded Passey Ranch — a privately owned western horseback riding program and boarding facility in San Tan Valley, Arizona. She currently works full-time as an instructor and trainer. Passey also competes in ranch sorting, a fast-paced sport involving cattle, and she spent a few years on a professional rodeo drill team.

“As in every aspect of life, there is always more to learn,” Passey said. “I absolutely love teaching and sharing my passion with my students, but I think the best teachers are permanent students themselves.”

In the next 10 years, Passey hopes to have another book published. She’s currently working on a nonfiction piece about the relativity of life experience that follows three different characters from different backgrounds.

“I haven’t officially started the manuscript, but I can’t wait to get into the thick of it once more,” Passey said. “I realize I was incredibly lucky and blessed to reach my dream so soon; but even if I hadn’t gotten published yet, I think I would still be trying — because that’s what my dad would have done.”

Six Arizona State University students from the forensics team placed 15th at the prestigious National Individual Events Tournament (NIET). The National Individual Events Tournament, organized each year by the American Forensics Association, was hosted by Bradley University, April 1–3.Senior Kohinoor Gill and junior Abbey Toye led the way, each reaching the finals with one of their competitive sp...

Senior Kohinoor Gill and junior Abbey Toye led the way, each reaching the finals with one of their competitive speeches. Across his six events, Gill amassed enough points to place 17th out of all speakers at the tournament — awards are handed out to the top 20. Senior Ben Steele, sophomore Sachin Kumar and freshmen Erin Guiney and Alexander Haw rounded out the team effort that saw the team once again place in the top 20. This year’s NIET had a total of 72 schools represented with 486 students competing in the competitions.

Toye qualified three events to the NIET: Persuasion, Dramatic Interpretation, and Prose Interpretation. She finished in 6th place out of 144 competitors in the event. Toye ranked 18th heading into the quarterfinals, but she managed to upset strong fields of competitors in both the quarterfinals and the semifinals to advance to the finals. This is her first event to reach elimination rounds at the NIET.

The two finals appearances by Toye and Gill provided a large percentage of the team's points, but alone these performances would not have landed the Sun Devils in the top 20. Strong performances by all six competitors in the 17 other events provided the difference. Steele contributed points in Extemporaneous and Impromptu. Sophomore Sachin Kumar added to the total in After Dinner Speaking, Extemporaneous, Impromptu, Informative, and Duo Interpretation (with Kohinoor Gill as his partner). Guiney and Haw each contributed in a single event, Communication Analysis for Guiney and Program Oral Interpretation for Haw.