AZLoop team members learn their design is one of 24 finalists from a field of about 1,300

Aerospace transportation and manufacturing firm SpaceX has selected an ASU-led team to advance in its worldwide Hyperloop competition, which aims to create a futuristic, regional transit system that hits speeds of up to 750 mph.

The SpaceX challenge invites college students to design and build transportation pods that zip through a tube-based track. Eventually, it could result in a travel network that gets users from Phoenix to San Diego in about 30 minutes, or from Los Angeles to San Francisco in less than an hour.

The field started with about 1,300 teams last year and has been narrowed to 24.

AZLoop leaders Lynne Nethken and Josh Kosar, students in the Ira A. Fulton Schools of Engineering, announced the selection to their team Friday night.

“We are very excited to let you know we’ve proceeded to the next round,” project lead Nethken said as the room erupted into applause and balloons dropped. “This has not been an easy project. There has been a lot of blood, sweat and tears.”

More than 100 students are involved in AZLoop from an array of disciplines that include engineering, robotics, physics, astrobiology, marketing and business management. Aside from Arizona State University and its Thunderbird School of Global Management, students from Embry-Riddle Aeronautical University and Northern Arizona University are part of the group that meets each week at ASU’s Polytechnic campus.

SpaceX’s letter to the team said officials were “extremely impressed with your design and we’re excited to see what you build.”

AZLoop will now put together a full-size, half-mile test track. Organizers are discussing permitting with the city of Mesa.

Arizona State University President Michael Crow pledged his support in a video address. “You guys have got one of the ideas to go forward,” he said. “Good luck!” 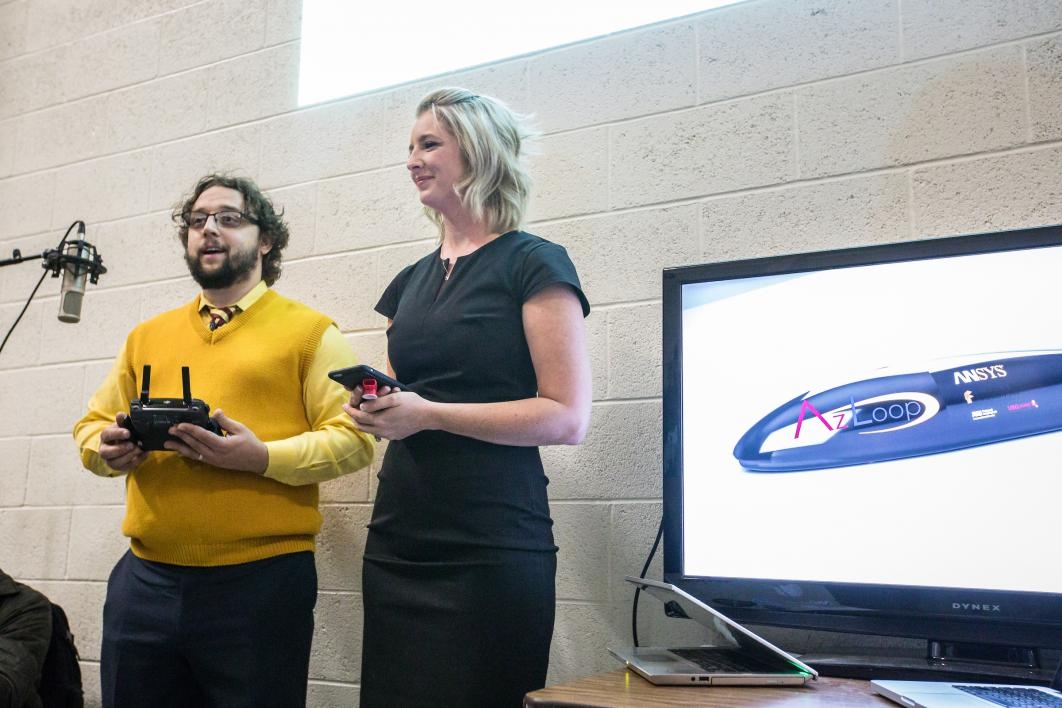 Project co-lead Joshua Kosar, a robotics engineering senior, and project lead Lynne Nethken, a mechanical engineering graduate student, share the news that their AZLoop team is one of 24 finalists in SpaceX's Hyperloop competition. AZLoop advanced from a field that started last year with about 1,300 entries. 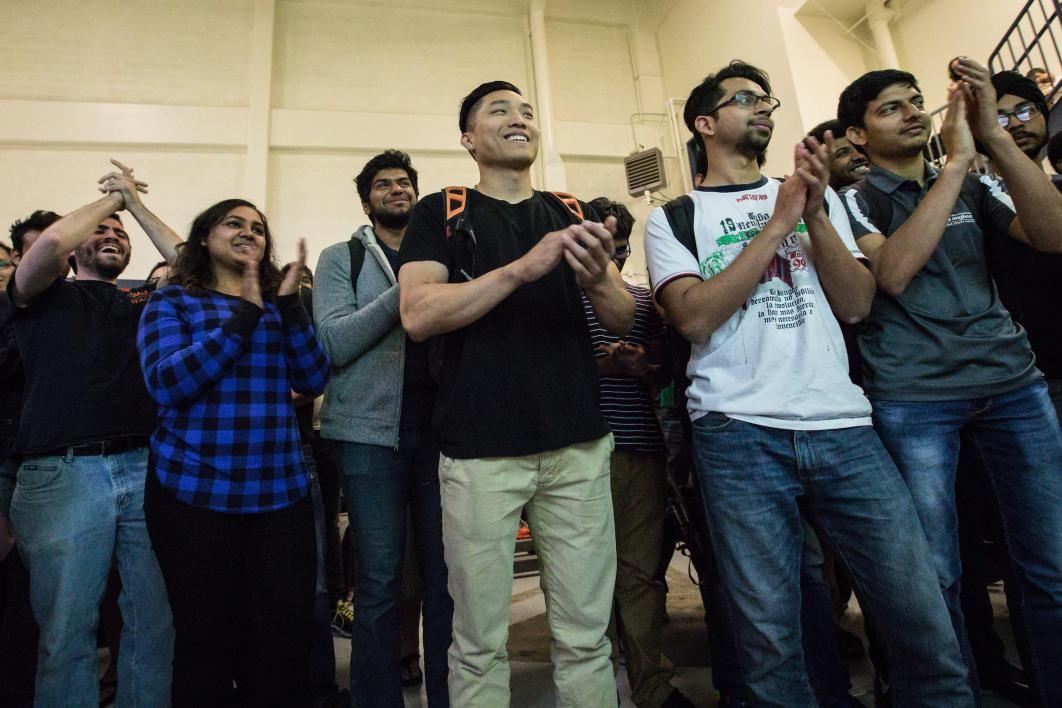 Dozens of AZLoop team members celebrate at the announcement that their high-speed transportation pod design has advanced to the build stage. The AZLoop team is composed of students from ASU's Tempe, Polytechnic and Thunderbird campuses as well as students from Northern Arizona University and Embry–Riddle Aeronautical University. 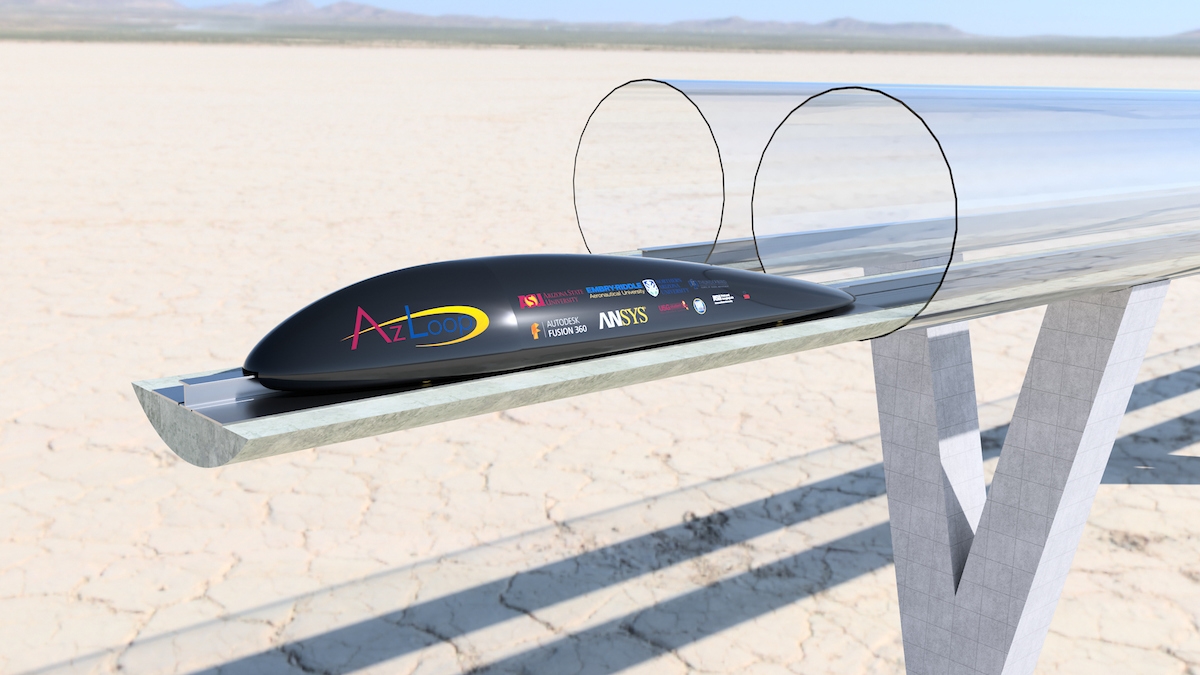 AZLoop leaders are discussing permitting with the city of Mesa so they can start building their Hyperloop test track. Their prototype could be ready for a test run by summer.

Team leaders have said their marketing division has helped secure funding. To this point, ASU’s support has included lab space and prototype materials. Project co-lead Kosar has said, “we’ve got the resources.”

Construction on the test track is expected to begin at the end of May. It will take six weeks to build, Nethken said.

The first trial run could begin as early as mid-July.

The final round is set for judging in August. SpaceX is headquartered in Hawthorne, California, near Los Angeles.

“We are literally going to change the world by helping develop this technology, and that is something that not many people get to be a part of,” Nethken told the team. “It truly shows that ASU is the leader in innovation anywhere. Let’s win this!”

Photo: The mood was festive at ASU's Polytechnic campus Friday after members of AZLoop learned their team had been selected to advance in SpaceX's Hyperloop competition. Lynne Nethken, project lead and mechanical engineering graduate student at Arizona State University, talks through video chat with students from Prescott's Embry-Riddle Aeronautical University following the announcement. AZLoop is one of 24 finalist teams selected from a field that started with about 1,300 entries. Photo by Charlie Leight/ASU Now

There are 5 million Americans living with Alzheimer’s, 1 million with Parkinson’s and nearly half a million with multiple sclerosis. And with an aging U.S. population, it’s likely those numbers will increase, making learning how to live with such neurodegenerative diseases essential.This week an event organized by Patrick Bixby, associate professor of English at Arizona State University, wi... 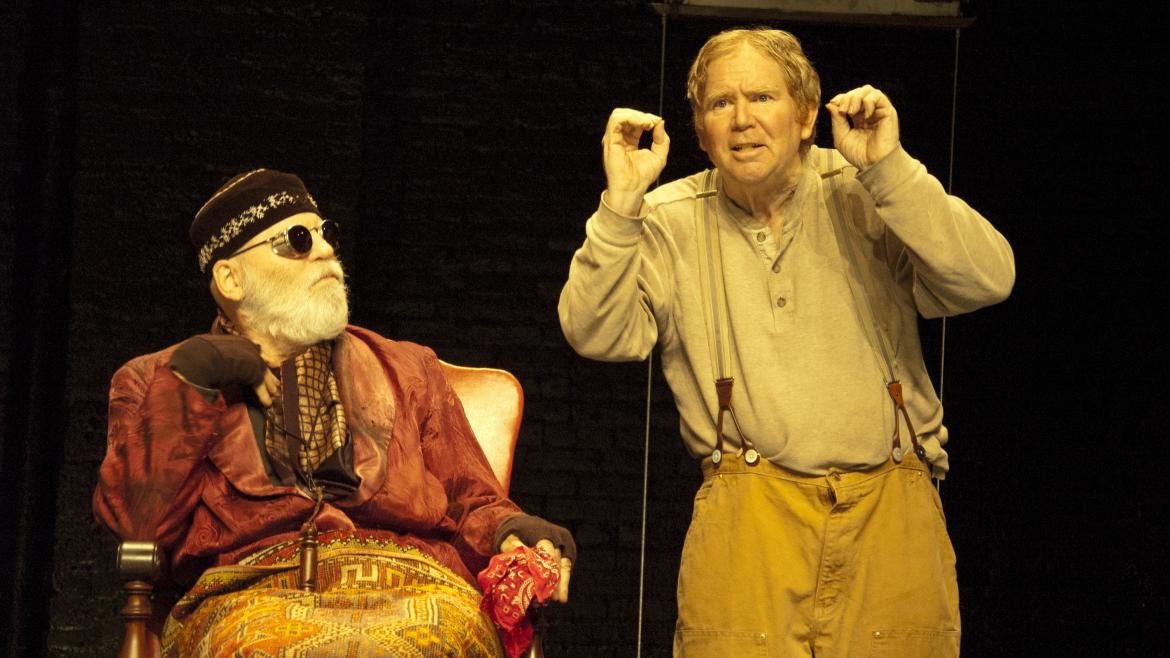 There are 5 million Americans living with Alzheimer’s, 1 million with Parkinson’s and nearly half a million with multiple sclerosis. And with an aging U.S. population, it’s likely those numbers will increase, making learning how to live with such neurodegenerative diseases essential.

This week an event organized by Patrick Bixby, associate professor of English at Arizona State University, will showcase how two veteran actors have been doing just that, with a special preview screening of a film that documents their daily trials with Parkinson’s disease while continuing to do what they love. The screening will bring together health care providers, university faculty, potential donors and other stakeholders at 6 p.m. Thursday, April 6, at the Beus Center for Law and Society on the Downtown Phoenix campus.

“Their story offers encouragement and insight for the growing number of people directly impacted by Parkinson’s disease,” said Bixby, who works in the New College of Interdisciplinary Arts and Sciences, “and, just as important, it provides the general public with a model for understanding and appreciating those with neurodegenerative conditions.”

Neurodegenerative diseases are characterized by the progressive degeneration of brain cells that make normal functions like physical movement and memory increasingly difficult. They are incurable. Parkinson’s in particular affects posture and balance, automatic movements and facial expressions, speech cadence and voice inflection — tools that are indispensable to actors.

As fate would have it, Moran and Jones, who had known each other since sharing a dressing room on a Broadway play in 1995, were diagnosed with the disease at nearly the same time, more than a decade ago. Both were determined to go on working at their craft but watched as opportunities dwindled upon making their diagnoses public — until Moran rediscovered an old copy of Beckett’s “Endgame.” 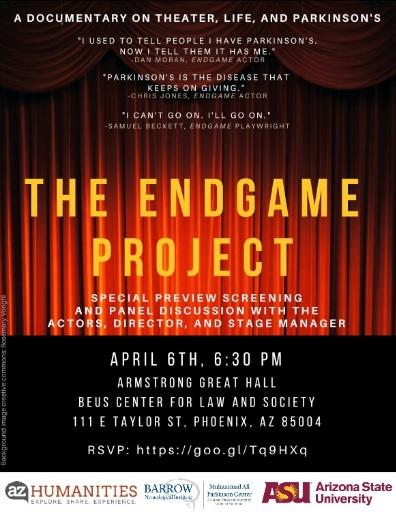 The characters in the two-man play resonated with him anew: one is described as having a stiff, shuffling gate, while the other is blind and uses a wheelchair. Moran pitched the idea of performing the play to Jones, who readily signed on.

“The diminished circumstances of the characters, along with their persistent desire to go on, felt to Dan like his own circumstances, confined to a body that would no longer do what it once could,” Bixby wrote in an article about the project. “The play not only spoke to their circumstances, it presented them with new opportunities. Who could understand these characters better? Who could embody these characters more fully? Suddenly, their symptoms were no longer obstacles to their work; they were integral to it.”

The film screening will be followed by a Q&A session with Moran and Jones. The next day, both actors will also visit the Muhammad Ali Parkinson Center at the Barrow Neurological Institute to discuss their experiences and share their insights with patients and health care providers.

Darolyn O’Donnell, recreation therapy coordinator for the Ali center, said the center recognizes the role arts can play in coping and healing with diseases like Parkinson’s, and offers dance, painting and music classes.

“We focus on what you can do … on independence and maintaining quality of life,” she said. “These actors are living proof” that it can be done.

The culmination of “The Endgame Project” events will be the creation of the Network for Arts, Humanities, and Neurodegenerative Care, an online network where Parkinson’s patients, their families, caregivers, health care professionals and members of the community can connect to foster innovative partnerships and activities.

David Coon, associate dean and professor at ASU’s College of Nursing and Health Innovation, who provided support for the event, said he expects it will broaden people’s views of living with a disease.

“I think it will help folks see from multiple perspectives about how someone else faces the journey and engages with life and works to maintain a quality of life across a chronic illness,” he said.

To attend the film screening, register here. Find additional information, including a map, here. For more information about the meet-and-greet with the actors at the Muhammad Ali Parkinson Center, call 602-406-4931.