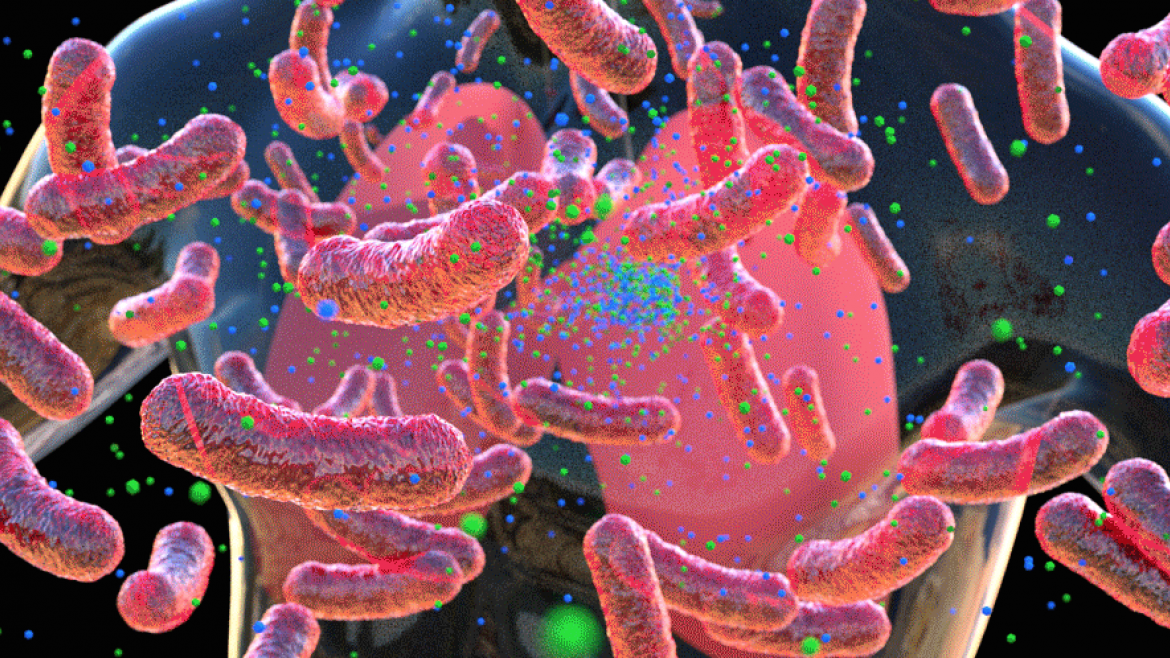 Test outperforms all others on market and takes just hours to complete, key in fighting disease that remains major worldwide risk

Tuberculosis, once better known as consumption for the way its victims wasted away, has a long and deadly history, with estimates indicating it may have killed more people than any other bacterial pathogen.

Consumption played a role in many of our stories of the Old West, but even today — despite $6.6 billion spent for international TB care and prevention efforts — it remains a major risk to human health.

A group of maverick scientists from Arizona, Texas and Washington, D.C., has teamed up to develop the first rapid blood test to diagnose and quantitate the severity of active TB cases.

Led by Tony Hu, a researcher at Arizona State University’s Biodesign Institute, eight research groups, including the Houston Methodist Research Institute and scientists at the National Institutes of Health, are harnessing the new field of nanomedicine to improve worldwide TB control.

“In the current frontlines of TB testing, coughed-up sputum, blood culture tests, invasive lung and lymph biopsies, or spinal taps are the only way to diagnose TB,” said Hu, an associate professor at the ASU's School of Biological and Health Systems Engineering, part of the Ira A. Fulton Schools of Engineering. “The results can give false negatives, and these tests are further constrained because they can take days to weeks to get the results.”

The team’s newly developed blood-based TB test not only outperforms all others on the market but also takes just hours to complete. This is critical since effective TB control requires that patients start treatment as soon as possible to reduce the risk of spreading it.

This test also holds promise for rapid assessment of TB treatment, an important factor in reducing the development and spread of drug-resistant strains.

And in a fitting twist of fate, Hu’s laboratory in the Biodesign Institute's Virginia G. Piper Center for Personalized Diagnostics is only about a mile away from the original Arizona State Tuberculosis Sanatorium, a Moorish-influenced structure that opened in Tempe, Arizona, in 1934 and had 60 beds available to treat patients.

A history of affliction

Estimates suggest that TB has killed a billion people over the past two centuries. 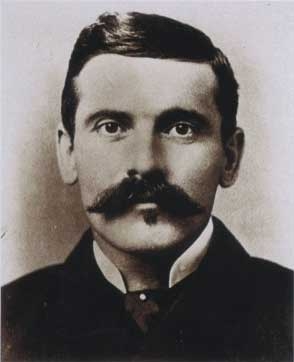 Perhaps the most famous TB victim in Arizona’s history was the Old West's John Henry “Doc” Holliday, a dentist, gambler and gunfighter, whose role in the gunfight at the OK Corral is still re-enacted daily in Tombstone, Arizona.

The original Arizona State Tuberculosis Sanatorium opened in 1934 and had a Moorish-style architecture and capacity of 60 patient beds. 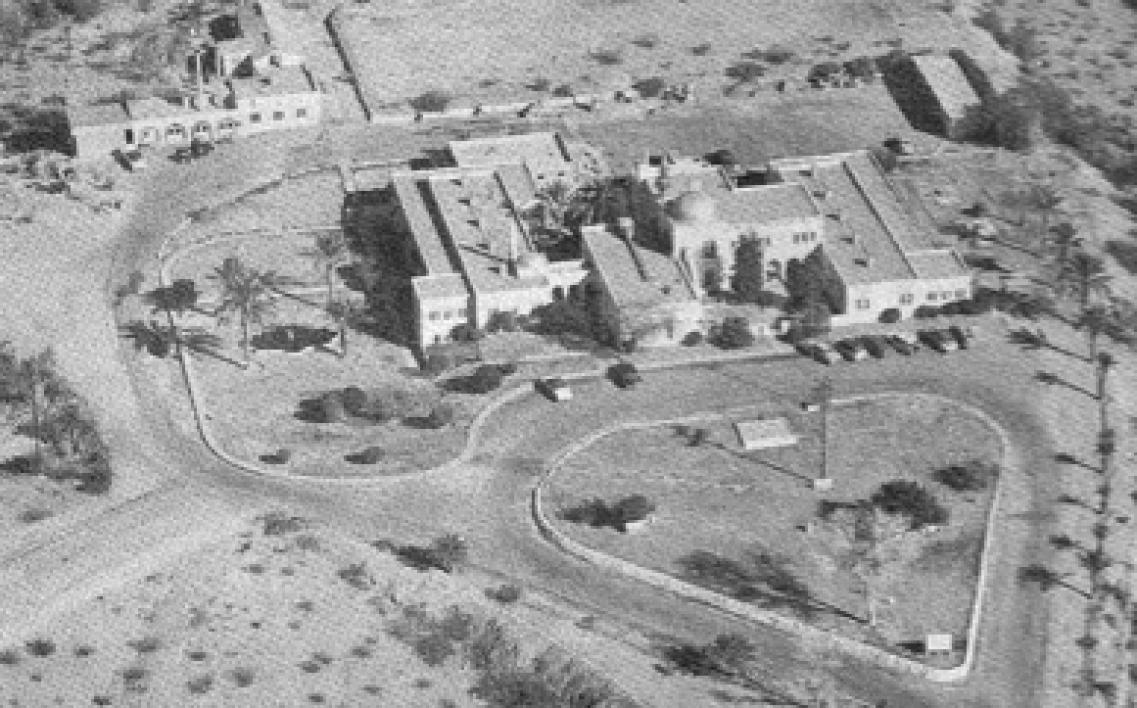 The State Tuberculosis Sanatorium was on the corner of Curry Road and Washington Avenue. On the same land, the State Sanatorium was expanded in 1964 with a new building that eventually became a children's hospital and was later acquired by ASU, eventually becoming the Community Services Building.

Locally, TB deeply influenced the early history of Arizona, since the warm, dry climate spurred the growth of sanatoriums and a medical tourism industry that helped give rise to Phoenix’s original population boom in the late 1800s.

Perhaps the most notorious TB victim in Arizona’s rich history was the Old West's John Henry “Doc” Holliday, a dentist, gambler and gunfighter, whose role at the OK Corral shootout is still re-enacted daily in Tombstone. After the gun smoke cleared, Holliday survived but died just a few years later, finally succumbing to the disease he seems to have contracted a decade earlier.

TB appears to have played a major role in his life, first influencing his migration west for a healthier climate, but also branding him with a prevailing social stigma. In the hit movie “Tombstone,” Doc Holliday’s enemies taunted him by calling him “lunger,” a derogatory term for those afflicted with consumption, who were stigmatized and often removed from society and placed in sanatoriums, such as the one near Hu’s modern-day lab.

Thankfully, TB now has a greatly reduced impact on Arizona, but it remains a major risk, particularly for the developing world and people with HIV infections.

Making matters worse, TB bacteria, such as in Holliday's case, can lurk dormant in a person’s lung tissue, often for decades, before spontaneously producing full-blown TB disease that can then spread to others. Currently, the World Health Organization (WHO) estimates that up to one-third of the world’s population may have such dormant TB infections.

In 2016, an estimated 10 million people worldwide still develop TB each year, according to the WHO’s most recent report, resulting in almost 2 million deaths. TB treatment has prevented almost 50 million deaths between 2000 and 2015, but TB remains a worldwide epidemic due to the lack of an effective vaccine, the rise in drug-resistant strains and the relatively poor performance of available diagnostics.

A new and easy way to rapidly screen those susceptible to TB infections was recognized by WHO and other public health officials as the major technological hurdle needed to overcome the disease.

Enter Hu and the research team.

Nanomedicine to the rescue

The research team’s newly developed NanoDisk-MS assay (see image below), could significantly improve TB diagnosis and management because it is the first test that can measure the severity of active TB infections. It does so by accurately detecting minute blood levels of two proteins (CFP-10 and ESAT-6) that TB bacteria release only during active infections. 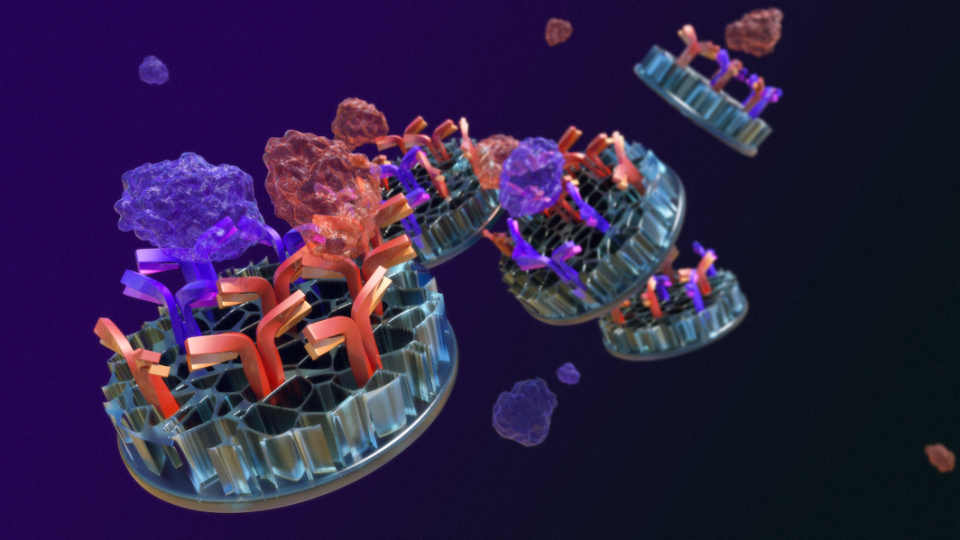 The research team’s newly developed NanoDisk-MS assay could significantly improve TB diagnosis and management because it is the first test that can measure the severity of active TB infections. It does so by accurately detecting minute blood levels of two proteins (CFP-10 and ESAT-6) that TB bacteria release only during active infections.

“We are particularly excited about the ability of our high-throughput assay to provide rapid quantitative results that can be used to monitor treatment effects, which will give physicians the ability to better treat worldwide TB infections,” said Hu. “Furthermore, our technology can be used with standard clinical instruments found in hospitals worldwide.”

Current TB assays often demonstrate reduced performance with HIV-positive TB patients or those with TB infections in non-lung tissues, and these patients can require tissue biopsies for diagnosis. The NanoDisk-MS assay, however, detected lung- and non-lung-resident TB cases with similar sensitivity (about 92 percent) regardless of patient HIV status, and revealed good specificity to distinguish patients with related disease cases (latent TB and nontuberculous mycobacterial infections; 87 and 91 percent, respectively) and healthy subjects (100 percent).

The strategy used to generate this assay may also be adaptable to other infectious diseases. Hu is now developing the current TB assay for clinical approval and hopes to make it available for clinical use as soon as possible to re-establish the role of Arizona and ASU as central players in the fight against TB.

The study, “Quantification of circulating M. tuberculosis antigen peptides allows rapid diagnosis of active disease and treatment monitoring,” was published in the Early Edition of the journal Proceedings of the National Academy of Sciences.

Evolution and religion: Finding middle ground in the biology classroom

Evolution and religion often evoke strong emotional responses that can seem undeniably incompatible. Yet, researchers at Arizona State University have discovered that using a short, evolution teaching module focused on the perceived conflict between religion and evolution actually reduced the number of students with this perception by 50 percent — a big success considering about half of all und...

Evolution and religion: Finding middle ground in the biology classroom

Yet, researchers at Arizona State University have discovered that using a short, evolution teaching module focused on the perceived conflict between religion and evolution actually reduced the number of students with this perception by 50 percent — a big success considering about half of all undergraduate students identify as religious. A new evolution teaching module, used as part of a recent study, is aimed at increasing acceptance of evolution and debunking the idea that students must choose a side. Photo by Sandra Leander/ASU Download Full Image

In a series of papers published in CBE Life Sciences Education and The American Biology Teacher, Sara Brownell, a School of Life Sciences assistant professor, and Elizabeth Barnes, a doctoral student, present research findings that listening more carefully to religious students and discussing religion in the biology classroom, improved the students’ sense of belonging in the sciences and also decreased their perceived conflict between religion and evolution.

Barnes, lead author of the studies, said: “There is growing evidence that there’s a disconnect between instructors and students at public institutions in an evolution type class. For the most part, biology instructors are not religious, yet a large number of their students are religious. This dissimilarity becomes a problem in learning evolution.”

The scientists conducted three studies. The first investigation looked at how faculty members teach evolution in Arizona’s public universities and whether they acknowledge students’ religious beliefs in the classroom. The second asked the question, “How do religious students feel in the biology classroom?” And the third investigated the use of a short, evolution module that shows students how the two topics do not actually have to be in conflict. The module was tested in an introductory biology course. 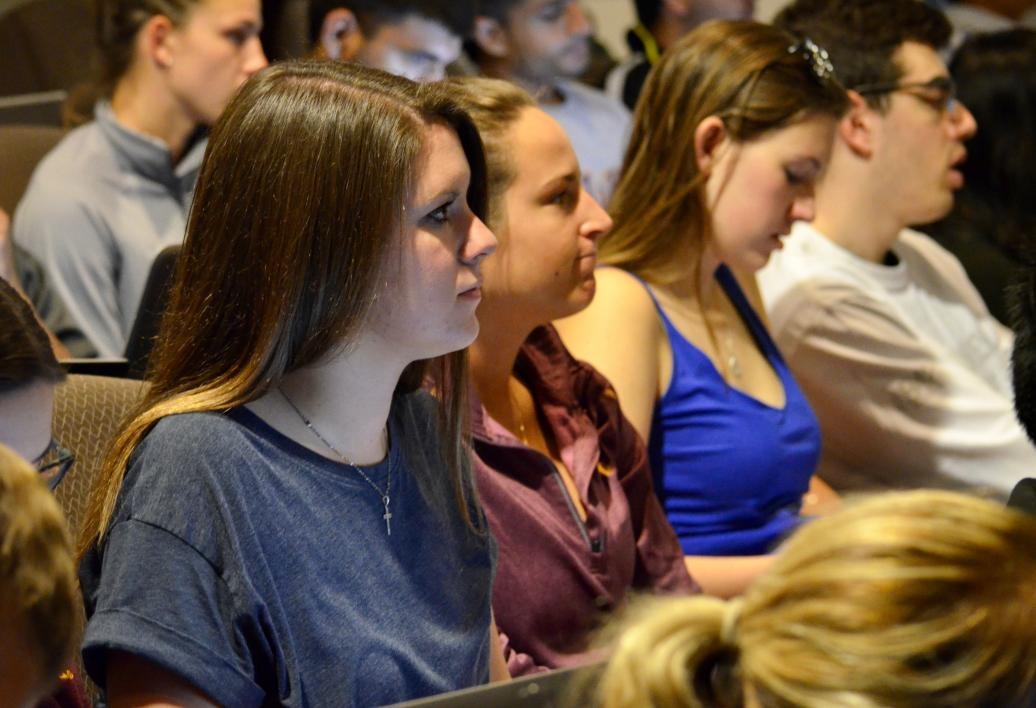 ASU researchers have discovered that using a short, evolution teaching module focused on the perceived conflict between religion and evolution actually reduced the number of students with this perception by 50 percent. 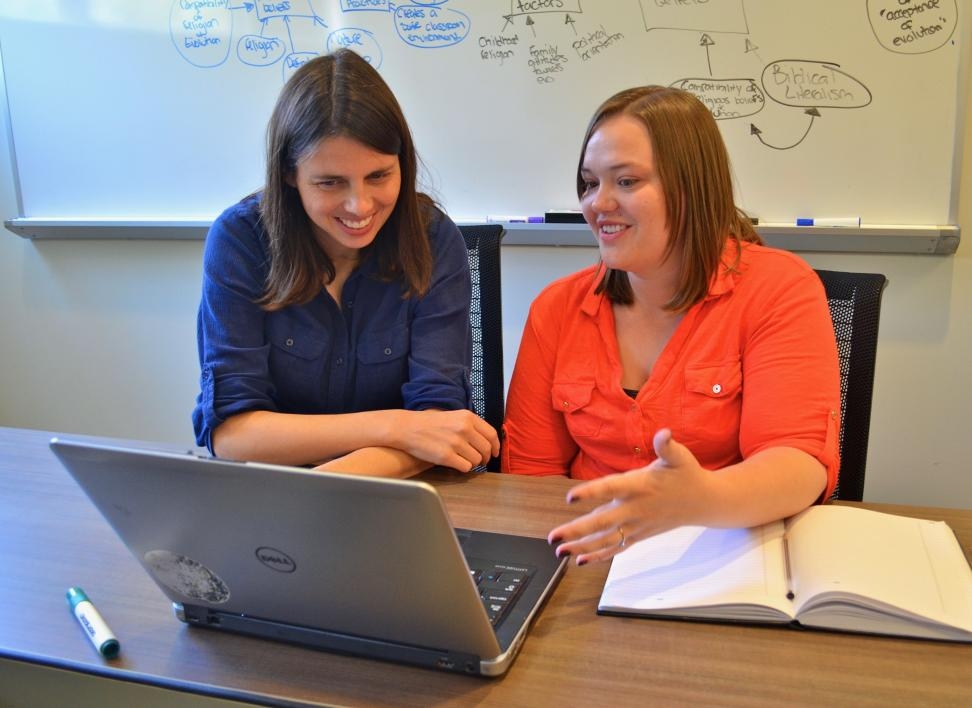 Sara Brownell, a School of Life Sciences assistant professor, and Elizabeth Barnes, a doctoral student, are presenting research findings that show listening more carefully to religious students and discussing religion in the biology classroom improved the students’ sense of belonging in the sciences. 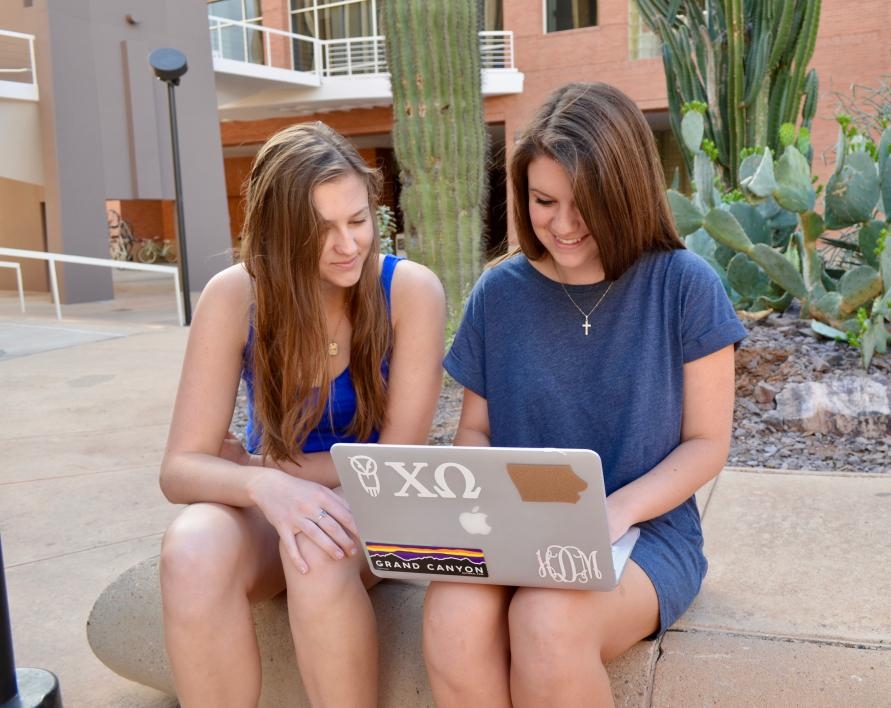 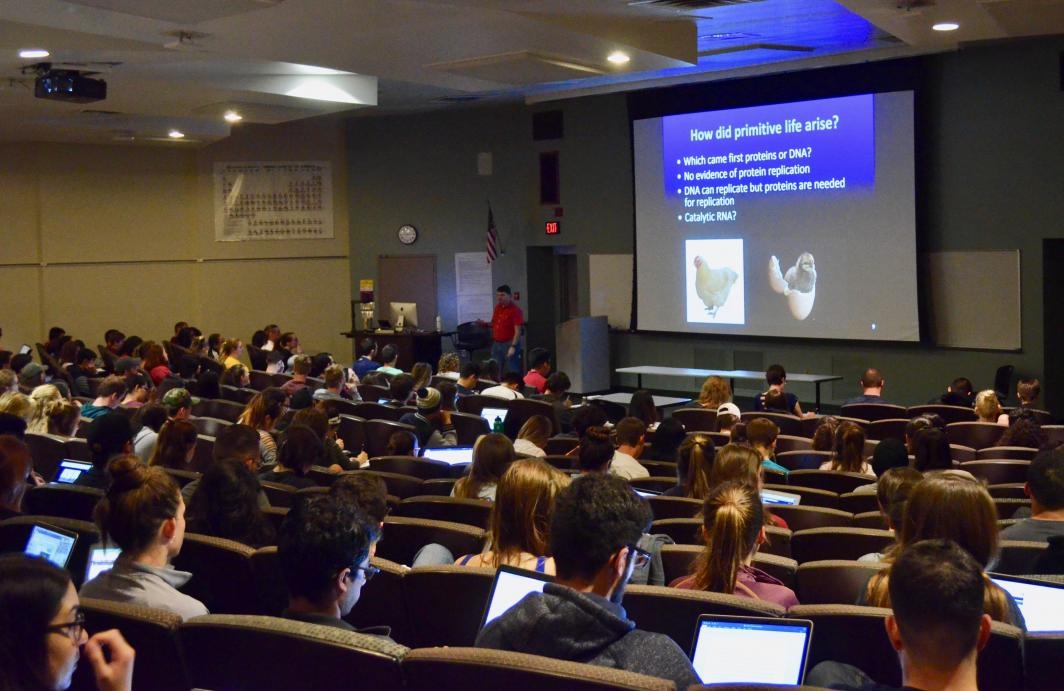 Researchers conducted several studies focused on the perceived conflict between evolution and religion. One of those studies demonstrated that the two topics do not have to be in conflict.

“We talk about the nature of science versus the nature of religion,” added Barnes. “Questions about the natural world can be answered by science. Questions about purpose, ethics and the existence of God are explored through religion. By acknowledging and discussing the spectrum of viewpoints between religion and evolution, we’ve shown, surprisingly, both religious and non-religious students show a decreased perception of conflict.”

The module also features a section on religious scientists who serve as role models.

Brownell, a neuroscientist who studies education, said old stereotypes that someone can’t be both religious and a biologist need to be discarded. She said these stereotypes may also be a barrier for underrepresented minorities to pursue careers in biology.

Brownell added that the overarching goal of their research is not to change people’s religious beliefs, as that is an important part of students’ identities. Instead, the evolution teaching module is aimed at increasing acceptance of evolution and debunking the idea that students must choose a side.

For their next step, the researchers are studying how instructors at religious universities teach evolution.