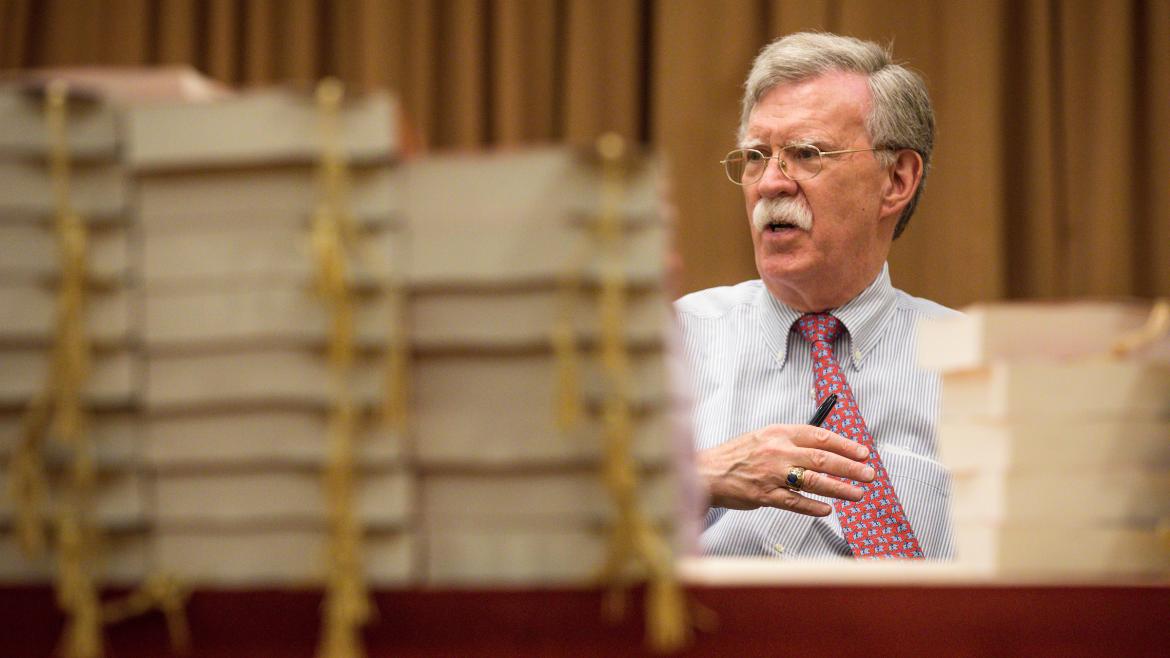 Former U.N. Ambassador John Bolton said Thursday night that the U.S. should show military strength and bolster its arsenal of nuclear weapons to avoid a future of terror and uncertainty.

“If the country isn’t safe, then everything else becomes secondary,” Bolton said. “It’s a time for America not to be a shrinking violet, but to show strength.”

The veteran of several Republican White House administrations addressed a range of topics including international trade, NATO and Russia at “Foreign Policy In The Trump Administration,” a talk hosted by ASU’s Sandra Day O’Connor College of Law. ASU Law’s Barry GoldwaterThe Barry Goldwater Visiting Chair of American Institutions was established at ASU in 1977 to honor Sen. Barry Goldwater’s exceptional service to Arizona and the nation. Holders of the chair are scholars who have distinguished themselves in the fields of political science, history, economics, law and public policy, and who uphold the principles of Americanism, individual freedom and the free enterprise system, which Goldwater espoused throughout his public career. Chair of Institutions at ASU sponsored the visit.

He added that “nuclear weapons in the hands of countries like Iran and North Korea pose a serious threat to the U.S.”

Bolton also criticized U.S. political and military allies, saying “all of our NATO allies agreed years ago that they’d spend 2 percent of their gross national product on defense,” Bolton said. “A lot of them haven’t done it, including some of our biggest beneficiaries. It’s especially galling they haven’t made the same commitment.”

Bolton, 68, served as UN ambassador under President George W. Bush. He considered presidential runs in 2012 and 2016. And President Donald Trump considered him as a potential candidate for secretary of state.

Bolton’s visit, attended by about 150 people at the Sheraton Grand Phoenix Hotel, was an opportunity for the university to encourage dialogue on international law and national security, ASU Law Dean Douglas Sylvester said.

“Ambassador Bolton is a diplomat and lawyer with a wealth of foreign policy experience, and we are pleased to host him to hear his thoughts on how this new administration might engage internationally,” Sylvester said.

During his tenure at the United Nations, Bolton urged the Security Council to take strong action against terrorism. He pushed to prevent North Korea and Iran from obtaining nuclear weapons. And along with France’s ambassador, Bolton led the council to approve a unanimous resolution to end the summer 2006 Hezbollah war on Israel.

In addition to a keynote address, Bolton sat down for a Q&A session with former U.S. Sen. Jon Kyl, a distinguished fellow at ASU Law. Kyl praised Bolton for his ability to shine a spotlight on uncomfortable subjects.

“It’s refreshing to have dialogue with someone who not only expresses his opinions but understands these issues,” Kyl said. “Really life and death decisions.”

On trade, Bolton said, North Korea will “make agreements and then break them.” He suggested that China has the influence to intervene and suggested “North and South Korea reunite, as well as with China.”

Russian President Vladimir Putin “is one tough cookie,” Bolton said. “He is governed not by emotion but Russian national interests — and most of his interests runs contrary to the U.S.”

Bolton said his message should be seen as a reality check for the nation.

“I spread sweetness and light,” he said, “wherever I go.”

“We are very appreciative of the encouragement provided to our students by Hool Coury Law and Draper University, as well as the other ASU Innovation Open sponsors,” said Ji Mi Choi, ASU’s vice president of Entrepreneurship + Innovation. “Without their commitment to supporting student entrepreneurship in all of its forms, we would not be able to provide these types of scholarships to innovators at ASU and across the southwest.”

The ASU Innovation Open finale, a technology venture acceleration competition, begins at 1:30 p.m. on April 2 at ASU’s Beus Center for Law and Society. Additional event information can be found here.