Ryan Trovitch, assistant professor in Arizona State University's School of Molecular Sciences, has been named recipient of a National Science Foundation (NSF) CAREER award, which is the most competitive and prestigious award given by the National Science Foundation to junior faculty. CAREER awards are designed to support teacher-scholars who most effectively integrate research and education within the context of the mission of their organization. Trovitch's award is titled "Development of Manganese Hydrosilylation Catalysts for Silicone Curing."

As part of a larger research effort on developing new chemical systems that address societal energy and sustainability challenges, Trovitch and his group are developing new low cost and sustainable catalysts for silicone curing. Silicones are a $15 billion per year worldwide industry and are used for everything from coatings, adhesives, contact lenses, kitchenware and more. The Trovitch group has invented a catalyst for silicone curing based on Manganese, which is much more abundant and is more than 500 times less expensive than the platinum metal in the catalysts that are currently used for this purpose. 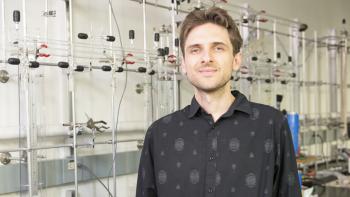 Trovitch's award was made under the NSF's “SusChEM” initiative, which addresses the challenges of sustainable supply, production and use of chemistry to solve societally relevant problems. Catalysis represents a key component of any sustainable, or "green," chemical process since well-designed catalysts reduce energy requirements, reduce waste and increase overall reaction efficiency. The economic impact of catalysis in industrial production of synthetic chemicals, fuels, pharmaceuticals and materials runs into the tens of billions of dollars annually.

Trovitch's hydrosilation catalyst has attracted commercial interest and is in the process of being developed by the Sigma-Aldrich Chemical Company for potential technological applications.

“Dr. Trovitch uses fundamental molecular thinking to change chemical processes that are expensive and wasteful into ones that are inexpensive and sustainable” said Neal Woodbury, director of the School of Molecular Sciences.

Four faculty members in the School of Molecular Sciences have recently received national recognition for their research and scholarship. Assistant Professors Ryan Trovitch and Gary Moore were awarded prestigious National Science Foundation CAREER awards. These awards are designed to support teacher-scholars who most effectively integrate research and education within the context of the mission of ...

Four faculty members in the School of Molecular Sciences have recently received national recognition for their research and scholarship. Assistant Professors Ryan Trovitch and Gary Moore were awarded prestigious National Science Foundation CAREER awards. These awards are designed to support teacher-scholars who most effectively integrate research and education within the context of the mission of their organization, and are the most competitive of the National Science Foundations awards to junior faculty.

Assistant Professor Alex Green, also of the Biodesign Center for Molecular Design and Biomimetics, has been named a 2017 Alfred P. Sloan Foundation Research Fellow. These fellowships are awarded to early-career scholars who the Sloan Foundation describes as “the most promising scientific researchers working today.” Awarded in eight scientific and technical fields, Green is one of 12 winners in Computational and Evolutionary Molecular Biology. 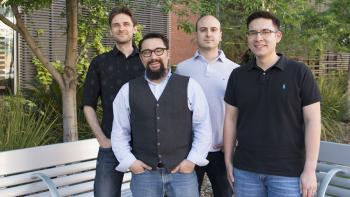 Assistant Professor Nick Stephanopoulos, also associated with the Biodesign Center for Molecular Design and Biomimetics, was recently awarded a grant through the U.S. Air Forces Young Investigator Research Program. The award, “Peptide-DNA Tiles as Building Blocks for Complex Nanostructures,” will support his work as part of the Biodesign Institute Center for Molecular Design and Biomimetics.

The innovative work of these faculty members support the School's commitment to using a deep understanding of fundamental molecular structure, properties and synthesis to address real-life societal challenges from the molecular perspective. Trovitch's work in catalysis lies at the heart of sustainable chemical processes. He is designing catalytic systems for conversion of biomass into useful fuels, for capture and remediation of the greenhouse gas carbon dioxide and building new catalytic methods based on Earth abundant and benign chemical systems. Moore and his students work on ways of capturing, converting and storing solar energy as fuels, in particular, using the sun’s energy to generate hydrogen from water and to convert carbon dioxide into useful chemical products.

The Stephanopoulos lab constructs novel nanomaterials from biological molecules such as proteins, peptides, and DNA that can be used for application in targeted drug delivery, protein structural characterization, as well as nanoscale machines and devices. The Stephanopolous lab is also building DNA hybrid biomaterials to answer medically and biologically relevant questions in fields like neuroscience, stem cell biology, and embryonic development. Green works on programmable molecular interactions between nucleic acids and proteins to assemble nanometer-scale components for biotechnology, energy, biosensing, and nanotechnology. Together with collaborators from Harvard and the University of Toronto, Green and his recently developed an efficient and inexpensive sensor for the Zika virus.

“Our junior faculty are working at the cutting edges of molecular science, in areas that are recognized by national organizations as critical, and that support the overall societal missions of our School. We are proud of our younger faculty members who are helping to expand the reputation for excellence in research of the former Department of Chemistry and Biochemistry at ASU", said Neal Woodbury, director of the School of Molecular Sciences. "These awards tell us that the School is able to hire the best young scientists as new faculty.”