At Friday’s launch event, School of Civic and Economic Thought and Leadership director Paul Carrese said the aim of the school is “to develop a new class of leaders.”

“This distinctive school is a blending of tradition and innovation: great ideas with preparation for leadership service,” he said.

Free speech was a theme at the event, with Arizona Gov. Doug Ducey quoting Frederick Douglass that “to suppress free speech is a double wrong. It violates the rights of the hearer as well as those of the speaker.”

“No one can ever accuse ASU of suppressing free speech,” Ducey said.

He also addressed the issue of a lack of diverse media exposure, saying, “We live in an age where it’s easy for people … to receive news from a single, handpicked source,” and that today’s university students are often encouraged to further insulate themselves from counter-perspectives.

“With this new school,” Ducey said, “ASU and the state of Arizona is bucking this trend. … As Americans, in times of great challenge, our heritage of rich intellectual discourse in the midst of different values and principles has served us honorably.

“The answer has never been less speech; it has always been more. Now at ASU and through the coursework at the School of Civic and Economic Thought and Leadership, this tradition can continue.”

ASU President Michael Crow proudly introduced the School of Civic and Economic Thought and Leadership as the 18th transdisciplinary school the university has launched.

“Education sits at the root of the core of the advancement of democracy,” Crow said, adding later that we “cannot advance the ideals of American democracy without intellectual combat.”

George Will (pictured above), a Pulitzer Prize-winning conservative political commentator, served as the keynote speaker of the event. He echoed Ducey’s statements on free speech, remarking, “Whatever else universities do, they shouldn’t attack free speech.”

He also touched on a number of hot-button issues concerning the current political climate, including cultural bias and immigration.

“Today, the temperature of politics is exceptionally high because the stakes are unusually high,” Will said. “We’re arguing about basics.”

The most crucial word in the Declaration of Independence, he said, is “secure.”

“Governments and institutions are meant to secure [basic human] rights. …That there is a fixed human nature, that we are not infinitely malleable,” Will said, because when you allow those in charge to assume we are infinitely malleable, “you license a very sinister political project. To make of human clay whatever the political class of the moment wants to happen. Our natural rights are essential to the flourishing of creatures of our nature.”

Will noted that American poet Robert Frost once said, “I’m against a homogenized society because I want the cream to rise.” 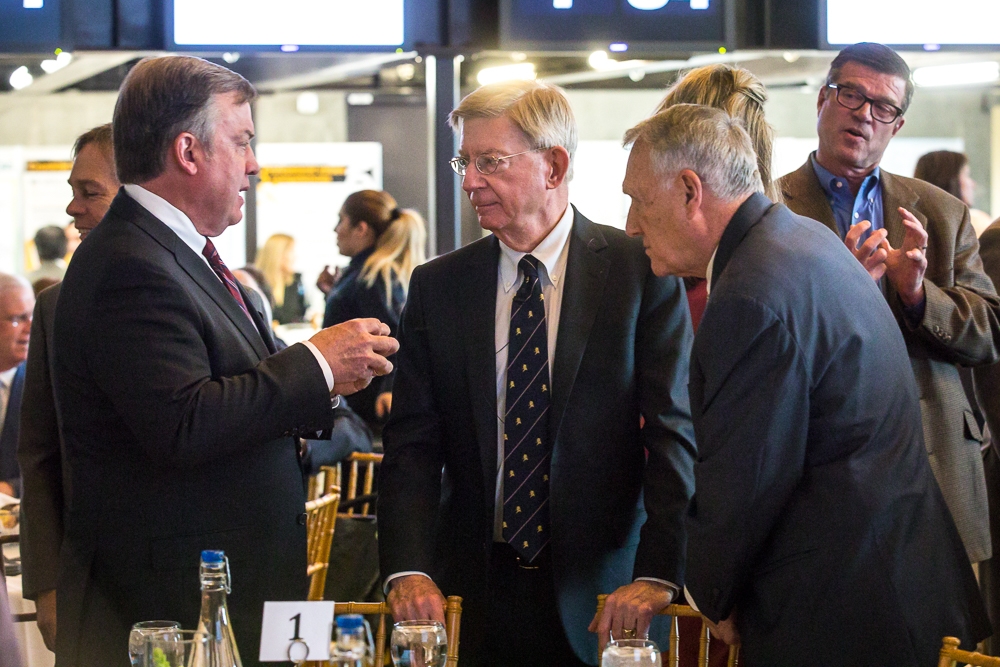 President Michael Crow (left) talks with pundit George Will and former Sen. Jon Kyl before the Friday launch of ASU's new School of Civic and Economic Thought and Leadership, a transdisciplinary program with a goal of engaging students in building a democracy. 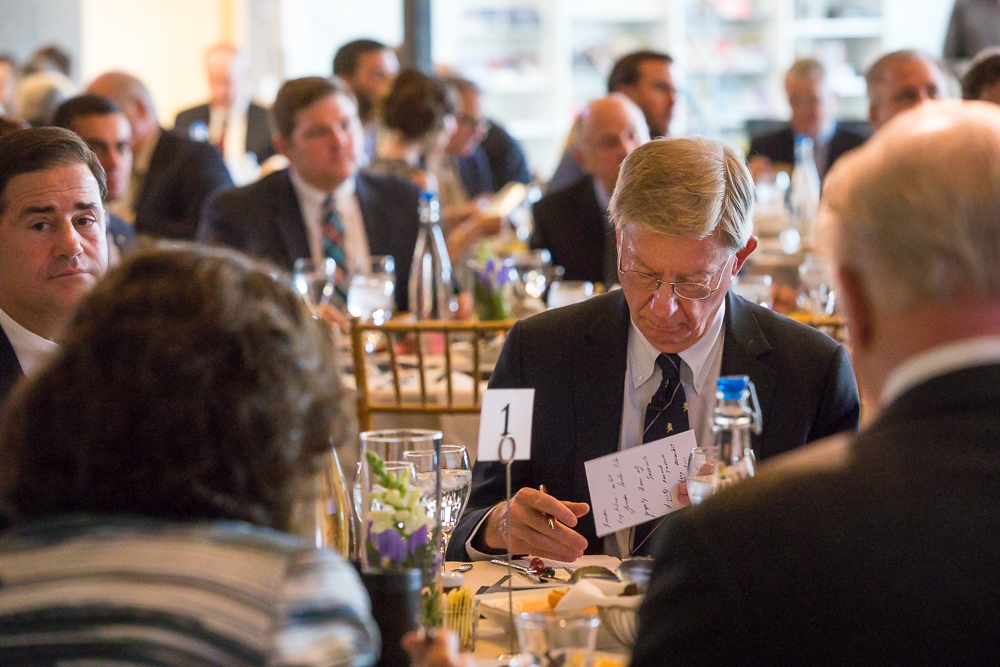 Conservative pundit George Will goes over his notes before delivering the keynote address at the First Amendment Forum in the Cronkite School on ASU's Downtown Phoenix campus. 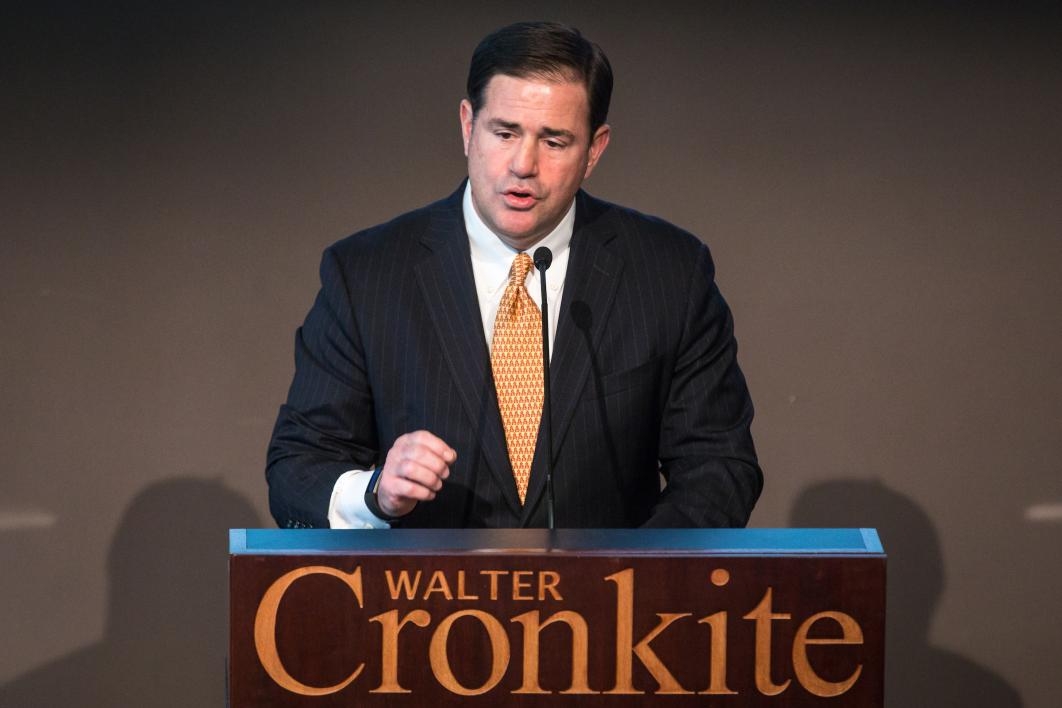 Gov. Doug Ducey, an ASU alumnus, addresses the crowd, emphasizing the importance of free speech and diverse perspectives. “As Americans, in times of great challenge, our heritage of rich intellectual discourse in the midst of different values and principles has served us honorably,” he said. 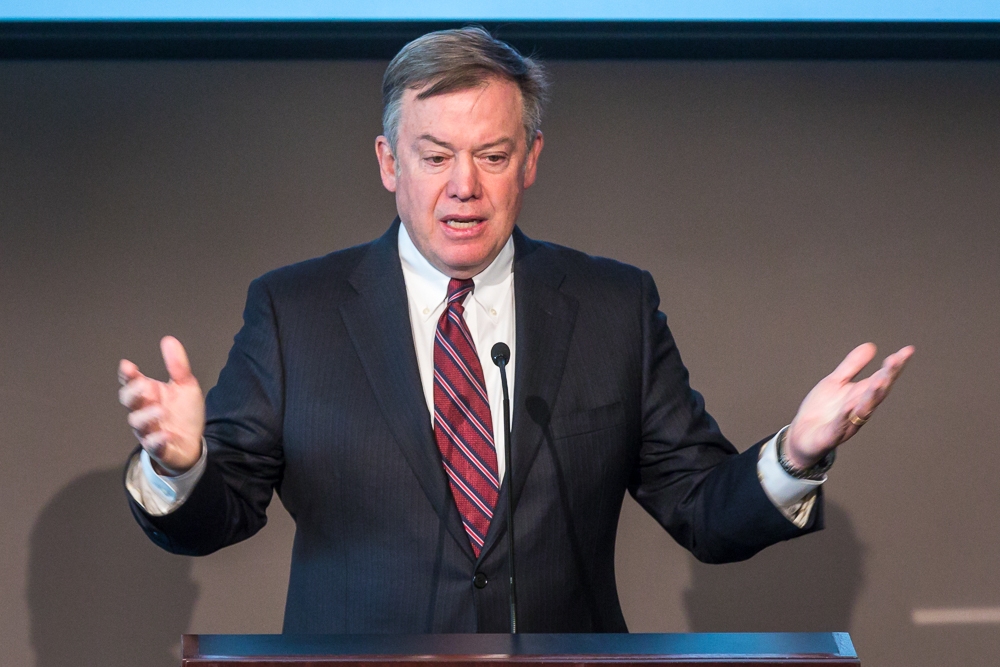 ASU President Michael Crow addresses the launch of the new School of Civic and Economic Thought and Leadership, the 18th transdisciplinary school the university has launched. 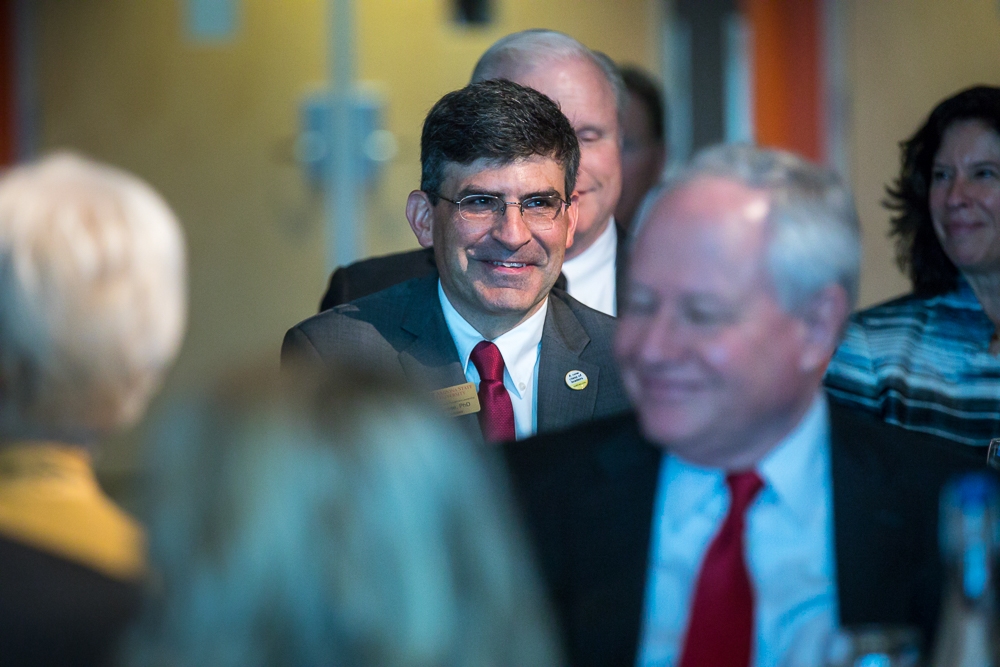 Paul Carrese, director of the new school, smiles as President Michael Crow acknowledges the work that went into the creation of the School of Civic and Economic Thought and Leadership. 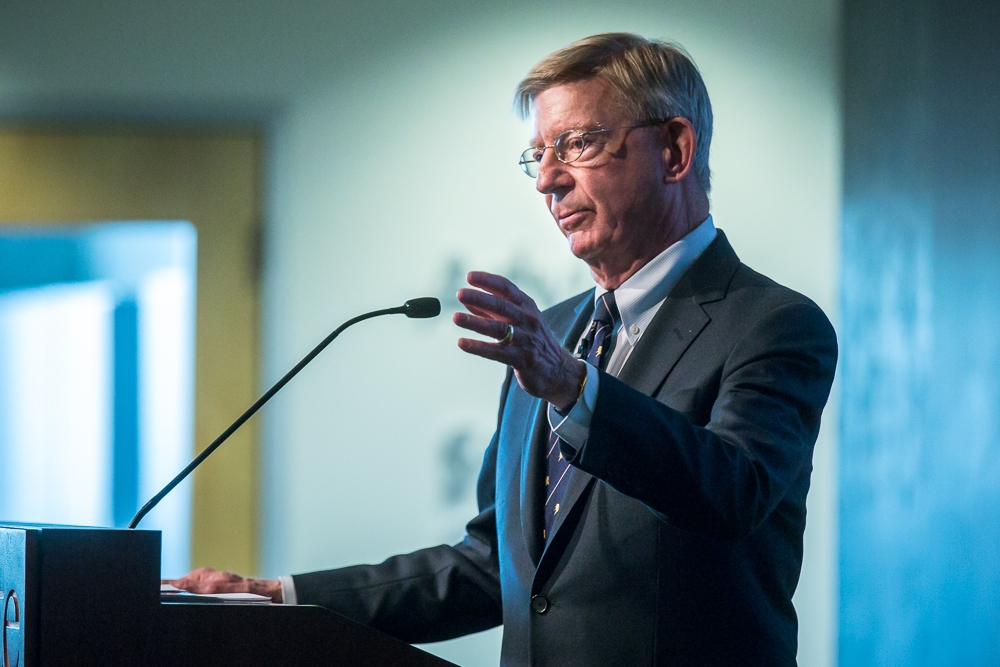 George Will, a Pulitzer Prize-winning conservative political commentator, delivers the keynote speech Friday morning. He touched on a number of hot-button issues concerning the current political climate, including cultural bias and immigration. “Today, the temperature of politics is exceptionally high because the stakes are unusually high,” Will said. “We’re arguing about basics.” 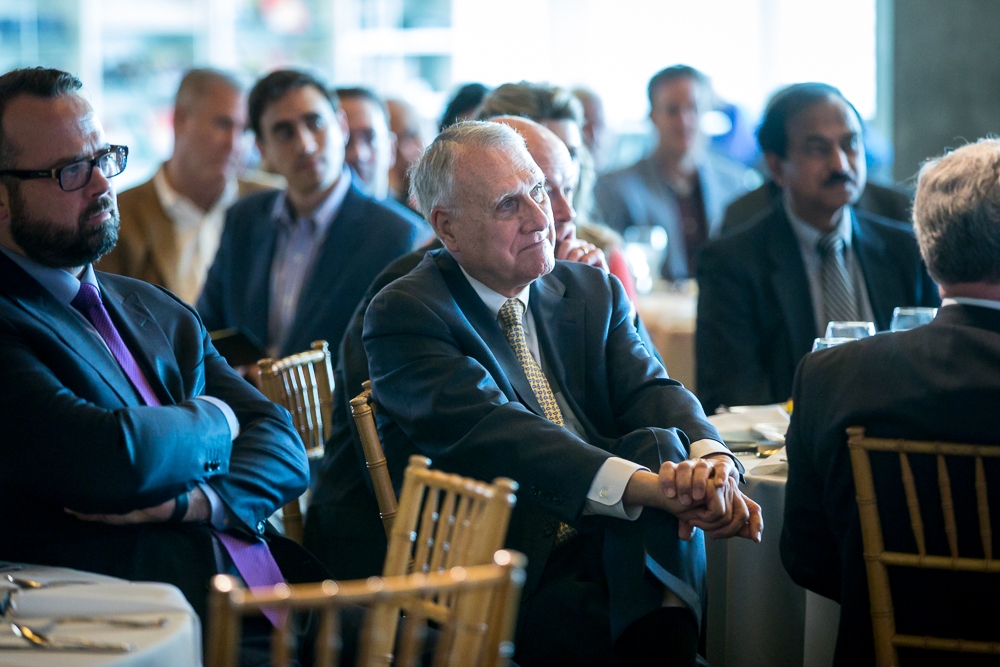 Former Sen. Jon Kyl listens to keynote speaker George Will at the launch. 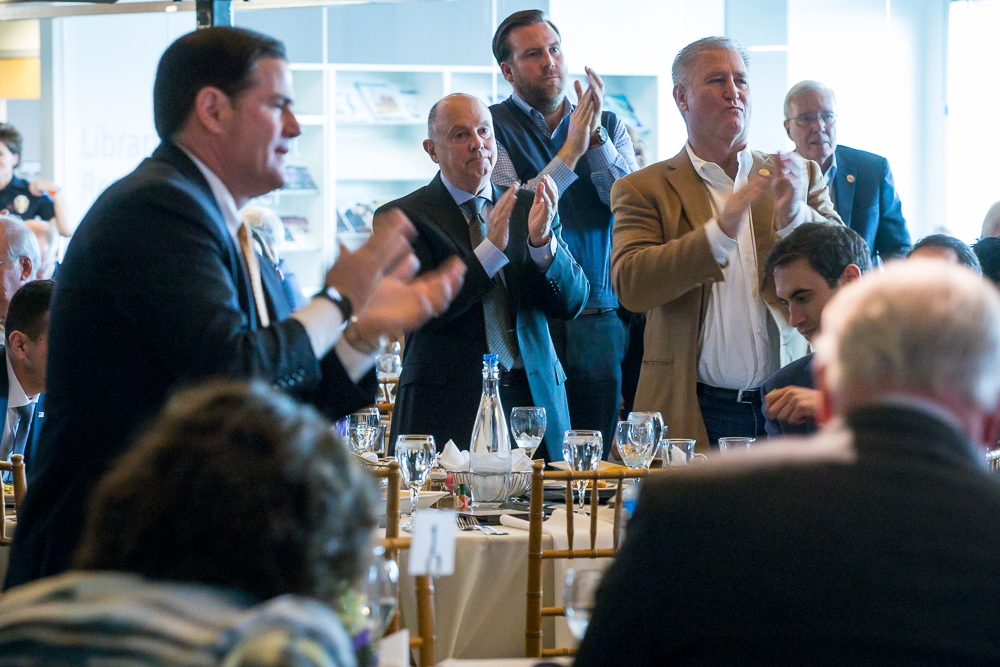 Members of the audience give George Will a standing ovation at the conclusion of his keynote address at the launch of ASU's new School of Civic and Economic Thought and Leadership. The launch featured around 150 people at the First Amendment Forum at the Cronkite School on Friday morning.

“Arizona State and this new school within it is a way of letting the cream rise,” he said.

The notion that strong leadership and civil discourse are necessary in public affairs is ancient, going back to the great Greek thinkers and debaters who laid the foundation for modern democracy.

Lately, though, Paul Carrese feels that notion is woefully overlooked.

“Our political culture is in very bad shape, regardless of partisanship,” he said.

It’s something he hopes to change as director of Arizona State University’s new School of Civic and Economic Thought and Leadership. The official school launch will take place at 7:30 a.m. Friday in the First Amendment Forum of the Walter Cronkite building on the Downtown Phoenix campus.

“America and other liberal democracies need to provide space in universities to think about politics, public affairs, leadership and civic society in a way that allows for the search for common good,” Carrese said.

The School of Civic and Economic Thought and Leadership will combine the principles and ideals of two existing ASU centers — the Center for Political Thought and Leadership and the Center for the Study of Economic Liberty — to provide a unique curriculum that reinforces traditional learning of time-honored knowledge while encouraging students to get real-world experience.

“The mission of the school will be to introduce students to the great philosophical debates across centuries through classic texts, and to use those texts and debates to prepare them for civic-minded leadership in the future,” said Patrick Kenney, dean of the College of Liberal Arts and SciencesThe School of Civic and Economic Thought and Leadership is an academic unit of the College of Liberal Arts and Sciences..

School faculty and staff also will help guide students toward internship opportunities, whether in government, business or non-governmental organizations, on both a local and state level. Carrese has identified four major metropolitan areas — Arizona, Los Angeles, New York City and Washington, D.C. — in which he hopes to eventually place students in internships.

Courses for the school’s bachelor’s degree in “Great Ideas and Leadership” are now available in the course catalog and will begin in the upcoming fall semester. More developments are underway, including a graduate program and a visiting-scholars program.

All of that will be supplemented by an extensive regular program of lectures and public dialogues to provide a model of civil debate for students, faculty, staff and the community at large. The value of reasonably and effectively working through disagreements is something we all need to be reminded of right now, Carrese said.

The first of such public colloquiums will take place Friday at the ASU Art Museum in Tempe. “Leadership and Politics in America After Election 2016” will consist of three separate talks: “The Meaning of Election 2016”; “Public Policy and the Common Good in the Trump Era”; and “Is a Contentious but Constructive Politics Possible?”

Kenney will moderate the first talk, scheduled to begin at 10:30 a.m.

“When I look back, I still remember as an undergrad going to hear visiting scholars and public intellectuals and top-tier reporters come to my university and talk, and it just really enlivens campus discussions and supplements and enhances the learning process and the range of views that are out there,” Kenney said. “President Crow has dedicated a lot of time and effort to that kind of thing across the university. It’s about bringing the world to ASU.”

Top photo: Conservative pundit George Will delivers the keynote address at the launch of ASU's new School of Civic and Economic Thought and Leadership, a transdisciplinary program with a goal of engaging students in building a democracy. The launch featured around 150 people at the First Amendment Forum at the Cronkite School on the Downtown Phoenix campus on Friday. Photo by Charlie Leight/ASU Now

The Eos Sextet, a saxophone sextet comprised of Arizona State University music undergraduate and graduate music students, has been awarded first prize in the ENKOR International Music Competition. The ENKOR competition includes a jury of over 500 members from 70 countries on six continents.The Eos Sextet is a chamber ensemble devoted to expanding the possibilities of saxophone chamber music. The g...

The Eos Sextet, a saxophone sextet comprised of Arizona State University music undergraduate and graduate music students, has been awarded first prize in the ENKOR International Music Competition. The ENKOR competition includes a jury of over 500 members from 70 countries on six continents.

The group has worked to create a new set of repertoire for the saxophone sextet medium. By commissioning contemporary works from composers such as Gregory Wanamaker, Carl Schimmel and David Dies, in addition to creating original arrangements of classic masterworks, Eos continues to build upon the rich tradition of saxophone chamber music in an innovative way.

The competition takes place online via applications with video submission and is the only online competition for classical music performers. “Our adjudication system and the number of judges is a guarantee that the level of proficiency and artistry can be ranked with maximum accuracy and eliminate the risk for positive or negative prejudice or underhand stipulations,” according to the ENKOR competition.

Eos competes in the Music Teacher National Association Conference Wind Chamber Music Competition in Baltimore, Maryland, March 18. All students received student enrichment grants from the School of Music and the Herberger Institute for Design and the Arts to compete in the regional competition in Honolulu, Hawaii, in early January and in Baltimore.