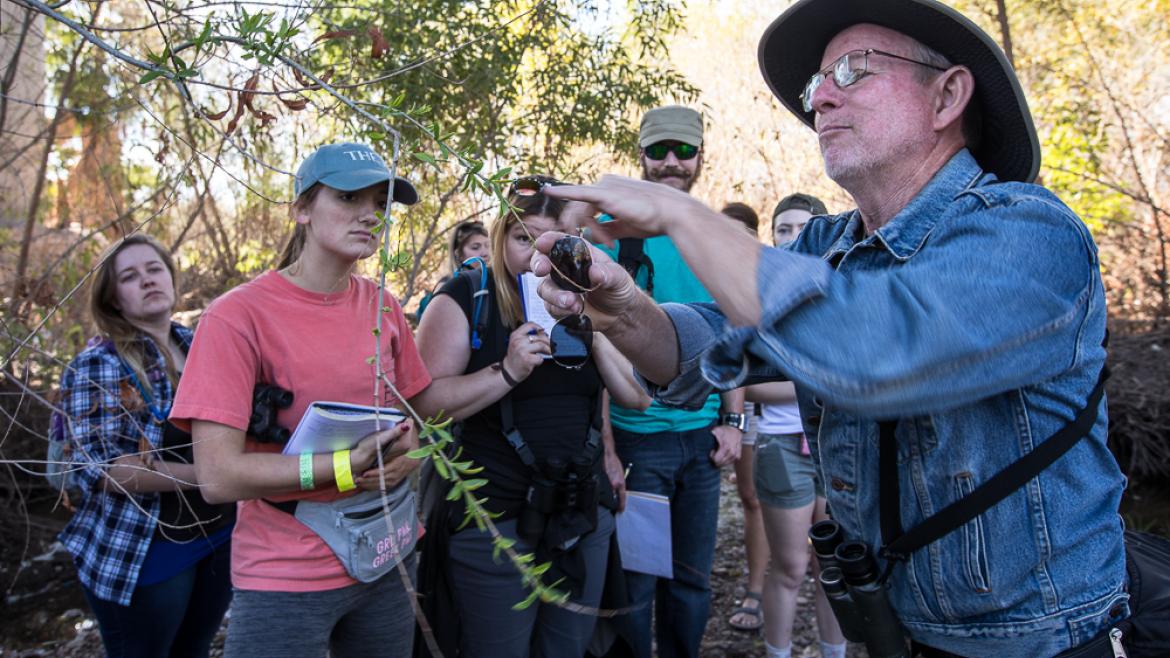 ASU professor Matt Chew savors role as 'most hated man' in invasion biology.
ASU professor says everything in nature has been shaped by human activity.
February 28, 2017

It’s the scientific name for tamarisk, also called the saltcedar, a shrub introduced to the U.S. in the 1800s. Today, it’s choking off waterways throughout the Southwest.

People call the plant by many names. Few are fit for print. And the same can be said for Chew, an assistant research professor in the School of Life SciencesThe School of Life Sciences is an academic unit of the College of Liberal Arts and Sciences. at Arizona State University and the most hated man in invasion biology. It’s an appellation he savors.

Of all the names he’s been called, his favorite is “the invasive species gadfly.” His counterintuitive approach puts him at odds with those who would rank him somewhere between river scum and climate change deniers.

“I don't love tamarisk, either,” Chew said. “I just don't hate it. But I do find tamarisk — and people's feelings about it — very interesting.”

To most, the pink-flowered scrub brush embodies the worst problems associated with invasive species. Chew, however, is calling for more emphasis on understanding the effects and functions of the plant, and less emphasis on where it came from and when. Invasive species can create benefit as well as harm, Chew argues. A paper defending his views is due to be published soon in Trends in Ecology and Evolution.

Water managers, farmers and ranchers say tamarisk bushes suck up too water. Botanists say it kills every native plant around it. Environmentalists say it turns desert riparian areas into dry, salty basins. For rafters and kayakers, it turns riverbank campsites into impenetrable thickets and creates deadly hazards. People floating the Rio Grande have been sucked beneath matted tamarisk roots and pinned by the current.

The U.S. Department of Agriculture classifies tamarisk as an invasive plant. There are groups dedicated to removing it, a near-impossible task. Burning tamarisk makes it grow back faster. Cut it down, and it just grows back. Herbicides don’t work.

When national parks and other federal agencies responsible for public lands talk about restoring natural habitat, “what they’re talking about is a perpetual gardening project,” Chew said.

“They want it to look like it was before man came,” he said. “In some ways it’s misanthropic.”

Chew tries not to use the word “native” anymore.

“It doesn’t mean very much,” he said. “Everything has been brought in from somewhere else. Invasive biologists systematically exclude imported species from their classifications.”

One of Chew’s points is this: Which point in the past do you choose as the ideal Eden? Before Europeans came to the New World? Mesoamericans traded (non-native) red macaws with the Anasazi in present-day New Mexico. Tamarisk was introduced to New England sometime before 1818. So, is it the ideal native state of nature before 1818? Or before the tamarisk was widely planted out West in the 20th century? Or do you go back to North America before people, when wooly mammoths and giant sloths roamed the plains?

“Invasion” has also gone from the New World to the Old, as well. Raccoons in Europe aren’t native, nor are grey squirrels in the United Kingdom.

"Every organism now living occupies an environment shaped to some degree by human activity."

“Invasion is a difficult metaphor, but it’s a compelling one,” Chew said. “You’ve got to take them on a case-by-case basis.”

When ecology emerged, society distinguished humans from nature. By the time ecology became a science, human affairs were regarded as an imposition on nature. Ecologists sought to study wild sites. By the time it was understood that the players and the stage were inseparably intertwined, few were (and are) unwilling to abandon the idea of “real” ecology where man’s hand is unseen.

In the case of tamarisk, it’s been vilified beyond rational thinking. In one of his papers, Chew notes that post-World War Two, the plant was described in similar terms to the Japanese a few years earlier. One suggestion at the time was to burn the plant out with flame throwers, a callback to the Pacific campaign.

“The history to date has been fostering fear and loathing whenever possible,” Chew said.

The problem is governmental, industry, and conservation groups use the widely available body of misinformation regarding tamarisk in preparing legislation, executive orders, management policies and plans, and promotional and educational materials, Chew said. Scientists, too, redisseminate outdated, inaccurate information in journal articles, further disconnecting science and management, he said.

But some scientists are becoming convinced that tamarisk is, as Chew says, “as much a ‘passenger’ of change as a ‘driver’ and has positive ecological values of its own.” 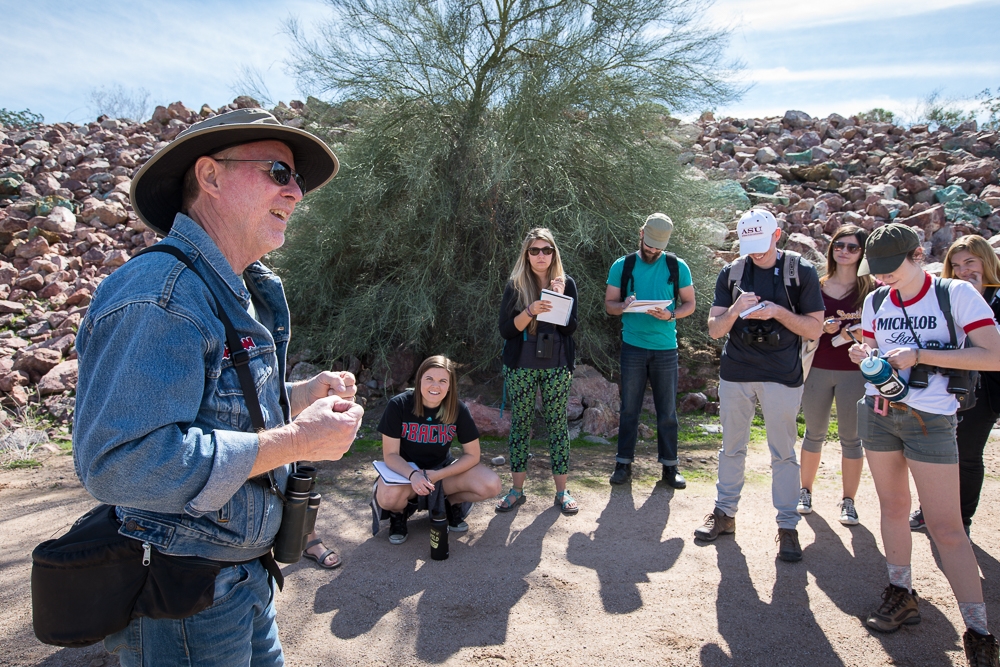 Assistant research professor Matt Chew talks to students about the history of the Rio Salado Habitat Restoration Project near Seventh Street in Phoenix. The area was set up in the '90s to restore native wetland and riparian habitats, and provide a controlled channel for flood waters. 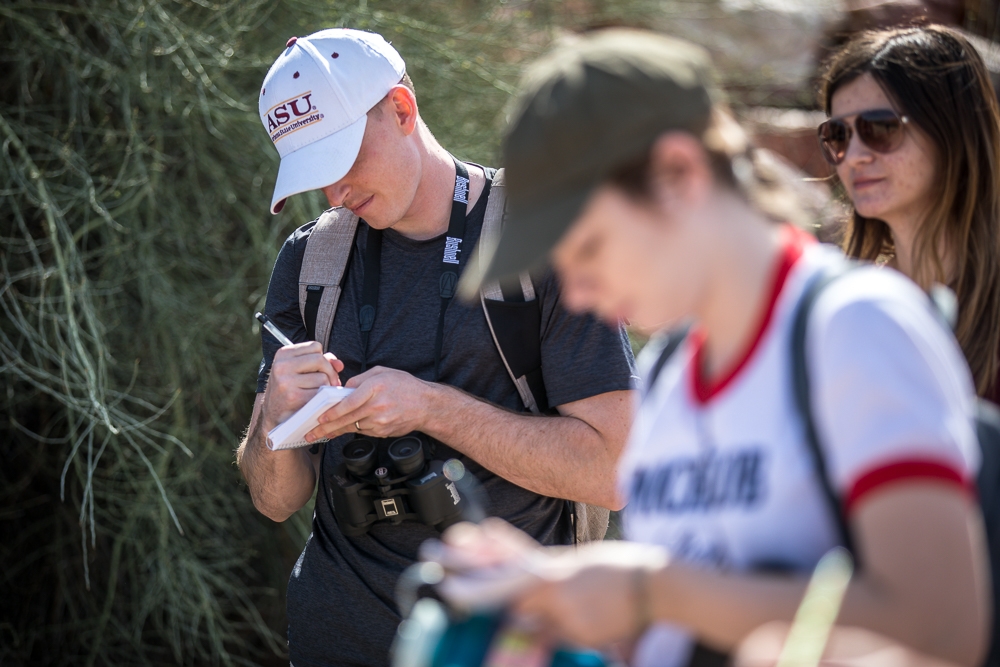 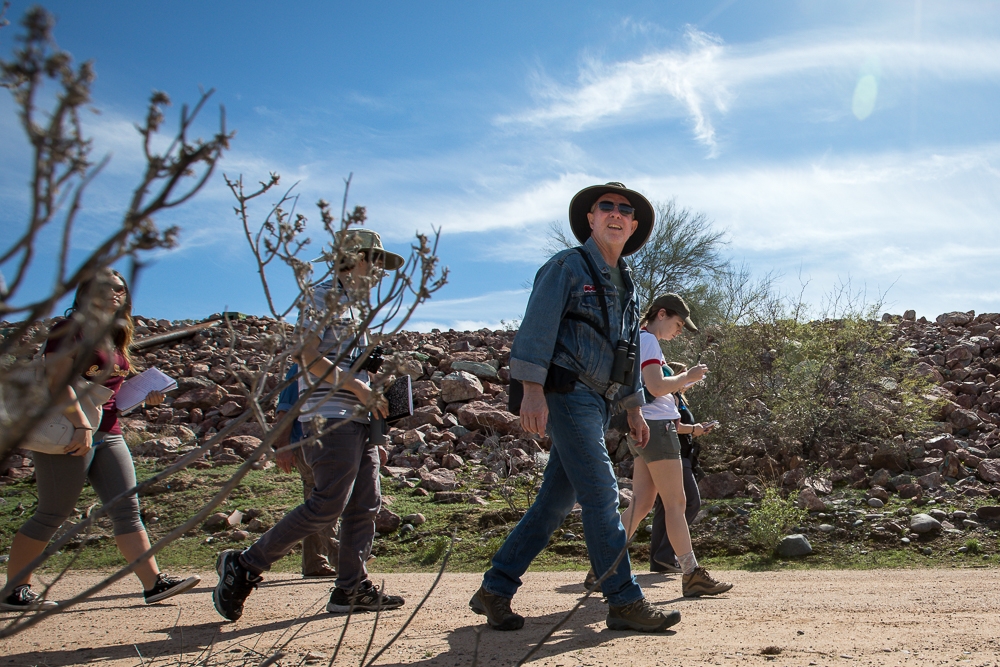 Chew leads students along the Rio Salado Habitat Restoration Project near Seventh Street in Phoenix. He says everything in nature has been influenced by human activity. 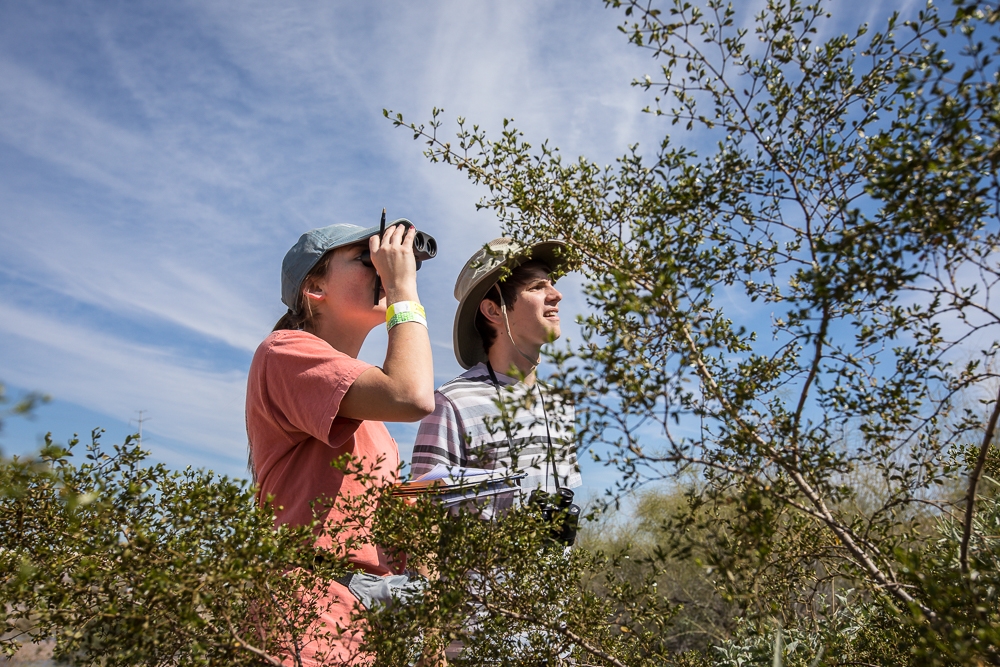 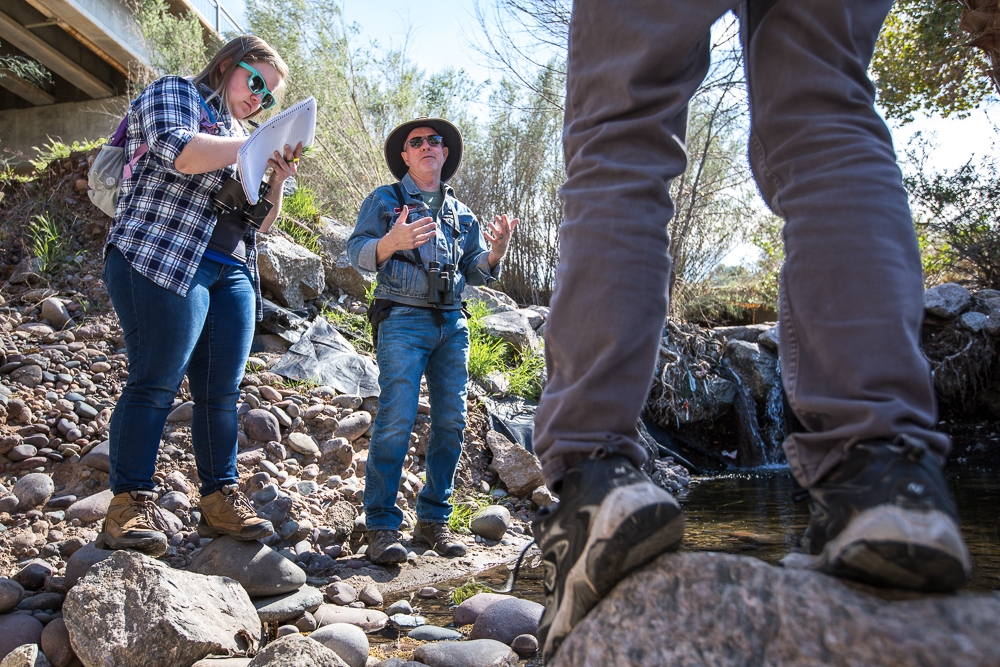 As conservation biology senior Millicent Chandler takes notes, professor Chew talks about the various sources of water, including from street drains. After rainstorms, biological debris, including seeds, come through the flood control zone from residential and commercial landscapes. The seeds — including willow, acacia and fan palms — then take root in the riverbed.

Increasingly, scientists are recognizing that ecosystems are reorganizing around tamarisk, providing food and cover to species.

Chew teaches a field class called Novel Ecosystems. It is intended to challenge preconceptions and received wisdom about the environment. The class goes to places you’ll never find on a postcard: to effluent-dominated wetlands, farm fields, newer and older commercial and residential areas, fake lakes and vacant lots.

“Among all this contention, one fact remains: Every organism now living occupies an environment shaped to some degree by human activity,” the class syllabus reads. “The conceptual separation between history and natural history is undeniably fictional. We would be hard pressed to demonstrate that individuals of any other species know or care. Real organisms must live and real ecological relationships must occur in the real world, and we will look for them there.”

On a recent balmy day, the class meets at the Rio Salado Habitat Restoration Area in Phoenix. Planes roar overhead. Rabbits hop along dirt paths. Salt River Project is doing a release from the Verde River, so the normally modest channel is bank-to-bank.

“This is very artificial,” Chew told his students. “At one point they basically killed everything down here to rechannel it.”

Underneath the Seventh Street bridge, Chew points out a white lead tree, a Central American tree spread around the world for cattle fodder. They’re found in vacant lots all over Phoenix. There is also an Australian acacia, papyrus (from North Africa and the Middle East, used as paper by the ancient Egyptians), and a eucalyptus tree (also from Australia).

“It’s getting kind of cosmopolitan down here,” Chew said.

Top photo: Assistant research professor Matt Chew checks the early buds on a willow branch at the Rio Salado Habitat Restoration Project under Seventh Street in Phoenix. Chew guides his dozen BIO494 students through the Rio Salado area helping them identify native and invasive flora, mammals and birds in the area. After rainstorms, biological debris, including seeds, come through the flood control zone from residential and commercial landscapes. The seeds — papyrus, willow, acacia, fan palms, etc. — then take root in the damp soil of the riverbed. Photo by Charlie Leight/ASU Now

Mark Klett, a Regents' Professor of photography in the School of Art, was selected by the National Board of the Society for Photographic Education as a recipient of the SPE Insight Award in 2017. Klett will be honored at the 54th SPE National Conference, March 9-12, 2017, in Orlando, Florida.The Insight Award was developed by SPE&700's National Board of Directors to recognize achievements of s...

Mark Klett, a Regents' Professor of photography in the School of Art, was selected by the National Board of the Society for Photographic Education as a recipient of the SPE Insight Award in 2017. Klett will be honored at the 54th SPE National Conference, March 9-12, 2017, in Orlando, Florida.

The Insight Award was developed by SPE&700's National Board of Directors to recognize achievements of significant distinction made by individuals to the photographic education field. 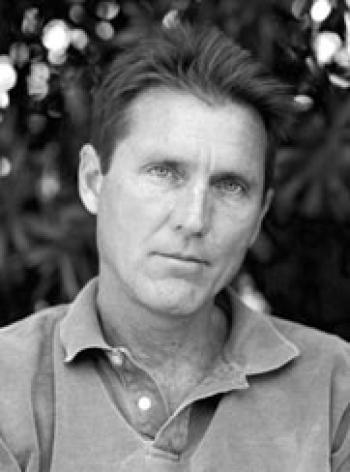